No, I'm not sick, but the pollen in the air is getting to me quite nicely.  Don't you just love it when you sneeze ten times in a row??

Yesterday was a good day.  I got lots of things accomplished, making me feel not quite so stressed.  I was able to mail the quilt in a huge box.  Remind me not to use the USPS for mail any more.  Good grief ... their costs are through the roof.

I also sent a small thumb drive to Cindy in Utah, so she knows it's on the way.  Both items said 2-12 days.  I'm pretty sure it will be on the twelve side.

In other interesting news, as I was scouting out ghost towns and places of interest to visit in Arizona, I ran across the name Joaquin Murrieta.  He was pretty popular when I was a kid since he spent quite some time in the foothills at a small almost ghost town named Hornitos.

Hornitos means little ovens, because of the Old Mexican tombstones in the shape of little square bake ovens.  It was the roughest little town in the Sierra gold fields, with lots of tombstones to show for it.  Domingo Ghirardelli had a chocolate store there, the walls of which are still standing.  This is where he perfected his chocolate recipes.

It seems Joaquin not only spent time in the little jail in Hornitos, but he spent some time in Arizona.  When I read about a book by Frank Latta, a local author who spent years following Joaquin's trail, I decided to purchase it.

Out of print by many years, wasn't I surprised when I opened the box to find it was a Library book from Tulare.  Good heavens ... did someone steal this book and sell it to me?  Do libraries sell their books?  At any rate, this will be a good read.

When I was a little kid we visited Hornitos many times because we ran cattle up in that country for years.  We spent lots of time on the lawn nearby having lunch.  Inside the jail (which we visited every time) was a large pickle jar on the top shelf that held Joaquin's severed head.  Interesting, yeah??  I kid you not .... there was a head in a jar on the shelf.

It seems that was needed for proof in order to get paid the bounty on his head for all the stealing and robbing.  I was fascinated with that and the grey sock monkeys sold to raise money to keep the jail open.

Was it real?  Who knows ...  I thought it was.  I remember it like it was yesterday.  Now the hunt is on for the head, actually thought to have been lost in one of the San Francisco earthquakes. 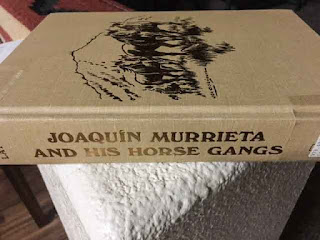 Joaquin and his family of cousins and friends gathered horses in the wilds of Alta California and Nevada, driving them to the Mexico border where the rest of the family took over and sold them to ranchers and cattlemen further south.  It was a lucrative business.

At some point, "white" men killed his wife and children, making him become the vengeful killer he was known to be.  He robbed stagecoaches, trains, wagons, mining camps ... you name it, he stole from it.  Turns out however, there were actually FIVE Joaquins in the family, all of whom took part in the robberies.  Only THE Joaquin was credited with all of the dead bodies.

I'm hoping at some point to follow his trail around Arizona.  I'll let you know how it goes.

In other bright news, I actually decided to read my entire house insurance policy.  Wasn't I surprised to find "Farm Coverage".  What???  It adds $200 to my premium.  It appears they never took it off when I moved away from the ranch.  It's my fault, I should have been reading everything from top to bottom.  They said they would try to get at least a 3-year refund.  I'm not holding my breath.  You just have to scrutinize everything with a fine tooth comb.  No trusting anyone any more.

Spring has finally sprung here in California, and although it's been overcast, my carpet roses are starting to bloom.  It's an optical illusion.  Really, they were supposed to be carpet roses only twelve inches high.  My original landscaper seems to have a different EYE than I do!!  How big was that fish you caught???? 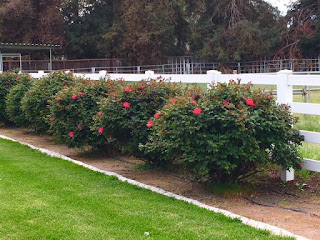 They are such a solid pink/red color that you can hardly see one petal from another. 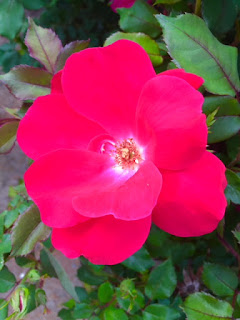 Still no info on my Dish Network satellite repair, nor my motorhome insurance.  The only clean part of the rig is the front, as that project hasn't progressed at all.  I did actually make it to the store for a few groceries.  I'm STILL checking dates, since that little store isn't known for it's freshness, just it's closeness to home.

Please excuse me now while I go get my box of kleenex!!!