Who's made marshmallows in their very own kitchen??  It can't be THAT hard, right?  With not a lot else going on at the moment, I decided to give it a shot.  I've had them before and they are NOTHING like the ones you buy in the store.

First and foremost is two packages of gelatin.  Kind of like jello, but without the flavoring. That's something you would never find in my kitchen, so I had to make a Walmart trip.  I needed Def fluid for the rig too, or I would have gone somewhere else.  THAT is tomorrow's story!!

Anyway, back to marshmallows.  Dump the gelatin into a big mixer with some water.  Actually, do not DUMP because it splashes all over and makes a big mess.  The instructions SHOULD say stir lightly.  There was no mention of STIR.

In the meantime, sugar, water and corn syrup are boiled until it reaches 240 degrees.  At the time I was thinking "here's another one of those pour carefully down the side of the bowl" things. 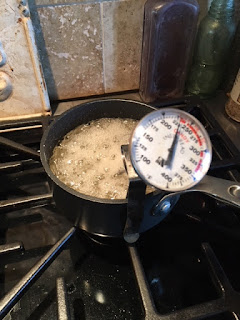 That of course didn't work well since there's absolutely NO pour space in these mixers.  It went down the side of the bowl where it stuck, making for a nice waterfall effect.  Turn on high.  I thought the bowl and all were going to go flying off into the kitchen!!

Let it go for 15 minutes.  Yikes!!  That gives you time to prepare the pan.  First off this should have been placed in an 8 x 8 pan, not a 9 x 13, but I followed the directions.  Spray with cooking spray and pour in powdered sugar mixed with a little cornstarch.  No, it did NOT say to sift it first.

In no time, I had big lumps of powdered sugar and cornstarch on the counter, all over my jeans and even in my hair.  Every time I turned around, there was another "poof" of it on the floor.

When 14 minutes had passed, I poured in a teaspoon of peppermint flavoring.  That was just enough moisture to make the mixer go wild as I hung on for dear life, not wanting it to land on the floor.

Finally ..... it's DONE.  I squeezed out a few drops of red food coloring to look more pepperminty and dumped it in the pan.  It wasn't the easiest thing to spread, but who cares.  I've already got the wire beater in my mouth getting every last vestige of marshmallow.  It's FABULOUS!!!!! 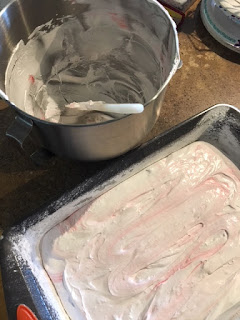 Now comes the hard part.  The waiting game.  I sprinkled the very top with more powdered sugar, mostly by just shaking my shirt and left it to rest for 5-24 hours.  I think that's the hardest thing I've ever done.

At long last, the time was up.  You of course know I only waited 4 hours and 45 minutes.  I spread more powdered sugar over a pastry cloth (an old pillow case) and dumped them out, completely shocked that they didn't stick.  Now for the pizza cutter method of cutting them up.

That didn't go real well since none of them came out the same size.  I tried to measure, but nothing worked.  They all ended up pretty wonky, but who cares.  I dusted the VERY sticky edges one more time.

If you've never experienced these delicate puffs of sweet goodness, you should make some yourself.  They are melt-in-your-mouth delicious.  I just can't get enough of them.  Yeah, there was maybe three or four missing before I even got them in a container. 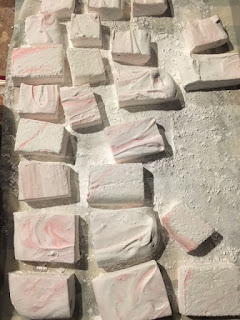 That's when I got the bright idea to dip them in chocolate.  Just melt chocolate chips and dunk them like strawberries, right?  That would be wrong.  With no microwave, I tried the glass bowl atop a pot of boiling water.

It melted the chips alright, but it was too thick.  Maybe a little cream will thin it down.  Oh oh oh NO.  NEVER EVER put a cold liquid in melted chocolate.  It makes the entire bowl seize up like concrete.  Wait ... I've seen this on those cooking championship shows.  Just add a little more and heat it back up.

As you can guess, that didn't work AT ALL.  By then I was almost on the floor with laughter.  I threw it all out and started over, this time adding NOTHING to the chocolate.  That made the dipping a little difficult since it was pretty thick, but that just makes for MORE chocolate per bite.

Pretty messy looking, but five minutes in the fridge made these the most decadent peppermint marshmallows I've ever eaten.  I could eat the entire tray in one sitting!!! 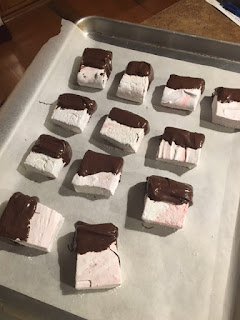 I packaged up all my pretties in zip lock bags and am keeping them in the freezer.  I'm limiting myself to one per day and making it last as long as possible.  They are so good, I'm going BACK to Walmart for more gelatin.

Time to clean up the mess, which is when I discovered half a package of gelatin pretending to be Gorilla glue on the bottom of the pan.  I let it soak.  It refused to budge.  I dug at it with a knife.  It STILL wouldn't budge.  I finally boiled some water and poured it in while chipping away with a screwdriver.  At long last, it dislodged itself.  Next time remember to stir lightly.