First off, a little more information.  The redwoods here were home to the native tribes of Sayante people.  Eventually the Mexican government took over and created land grants.  In 1867 Joseph Welch purchased 350 acres to become a tourist destination ... Welch Big Trees.  Upon his death, his widow leased the land to J. M. Hooper who ran a resort that included a dance floor.

What?  A dance floor in the forest?  It drew many famous people like Andrew Carnegie and Presidents Harrison and Roosevelt.  Rumor has it that John C. Fremont and Kit Carson visited the trees in 1846 and slept in the tree, which became known as the Fremont Tree.  Though you have to duck down to enter, you can certainly stand tall inside! 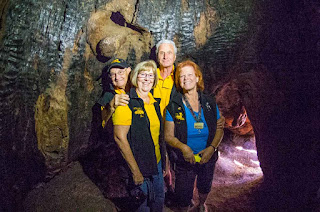 Another interesting business here on the hillside near Santa Cruz was California Powder Works.  Once a huge operation, gunpowder was manufactured here with chemicals from as far away as Sicily.   They built a wharf in Santa Cruz just for the unloading of materials, which were taken to the site by horse drawn wagons over a covered bridge which remains to this day.

A small dam was built across the San Lorenzo River, providing water for power and manufacturing.  Unfortunately, none of the flume or dam remains today. 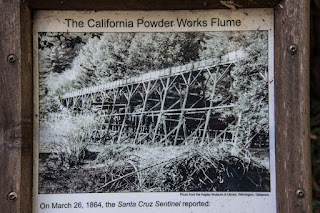 Once mixed together, the ingredients were ground down to smooth the edges, making it easier to pour and ending up with a smokeless powder the miners loved when it was contained in a small paper tube better known as dynamite.  This is one of the bunkers where grinding wheels worked day and night.   It has three sides of concrete, thereby directing a possible blast away from other buildings.

In 1898 when a huge blast did occur, killing 13 men, raining debris over the entire hill and breaking windows in Santa Cruz, the plant was shut down.  It has since become Paradise Park, a private subdivision of sorts held by the Masonic Temple. 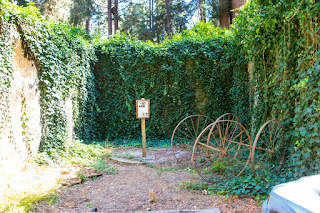 Next stop ... down a long winding narrow road and up the hill is this beautiful garden railroad, built by a contractor whose name I missed.  These G Scale railroads make for some fun in the back yard. 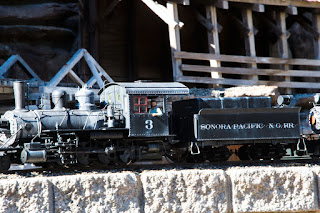 All of these buildings and signs have been hand made.  If you've got about 20,000 hours with nothing to do, here's a hobby for you!! 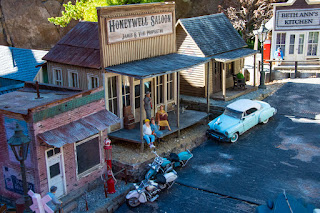 When not building, you can be scouting old toy and antique stores for parts and pieces, like this Harley Davidson motorcycle. 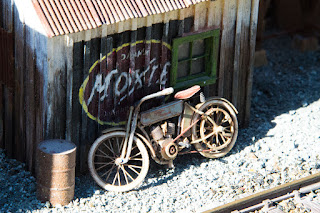 Kind of hard to see, but this trestle goes over a river made possible by the 12" wide waterfall in the back, before going through a tunnel under the mountain.  How fun is that?? 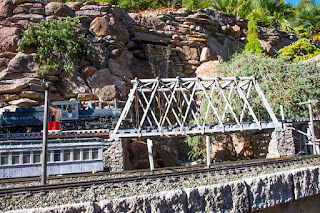 Inside is an even more amazing setup of small HO trains.  The detail here is beyond imagination.  You could stand for hours and see something different every minute! 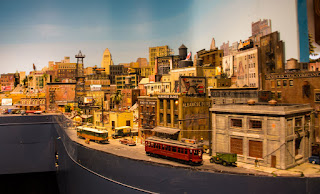 The paint signs, the vehicles, the people .... even palm trees ... and the buildings were all hand made. 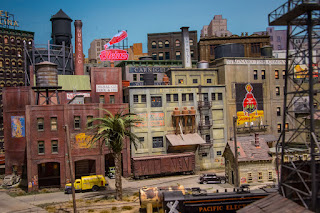 Around the corner is the old gold mining town, complete with laundry on the porch and a dump for old junk and miniature cans.  I was so fascinated by the setup, I didn't even get a picture of the trains!! 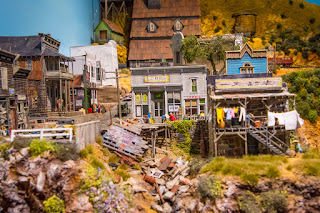 Next up, another garden railroad.  We couldn't miss the location with this baby sitting out front.  Can you imagine driving this???  Apparently the grandfather gave it to his grandchildren.  It's the children's father who built the next garden railroad. 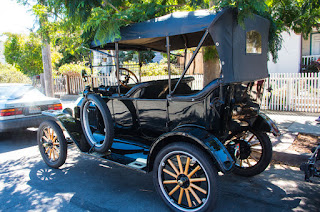 This is a dream for the neighborhood kids and whoever does NOT have to mow the lawn now covered up with railroad.  The entire front yard, down the side of the house and around to the back yard ...... all train setup. 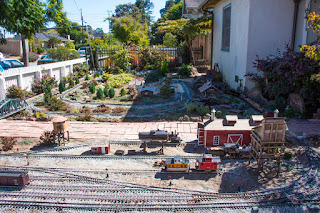 These guys can run four trains at once ... a necessity when there are three kids and a dad ... everyone gets their own train.  There are several water features, at least two tunnels and fun steam engines to drive. 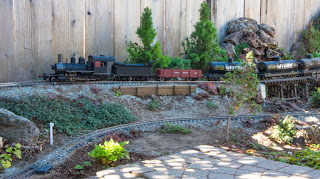 There's even a lumber mill operation and a train full of big logs.  I can see this in my back yard.  I already have the G scale train that runs around my Christmas tree.  With another $10,000 I could build a similar setup. 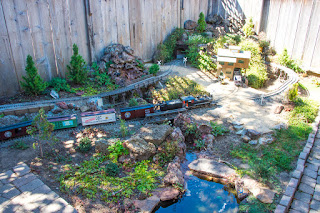 By now, we're all pretty exhausted, as we limped back to our camp for a huge barbecued pork loin and salmon on a shingle dinner.  This group doesn't mess around when it comes to food.

There's one more day of train riding at a private facility owned by Cal Poly University.  Bet you didn't know they owned a 1/3 size 19" steam locomotive railroad!!  That's coming up next .... after I hook up and wander back North to home sweet home.  The dogs will be thrilled to run loose in the back yard!!  I can't wait!!