That title alone would keep me from reading THIS blog!!  I stopped in for a couple of days to attend a Western Motor Home Association Indio Rally planning meeting.  The first thing I would like to say is it was HOT, HOT, HOT!!!  96 degrees to be exact!!  Hanford does have one redeeming factor besides the fairgrounds with 50 amp service for our rigs.  They have Superior Dairy!!

It's a small little place, an old diner to be exact, with pink booths and old time diner stools you don't see much any more.  Betty, Kurt and I made it our first stop.  Never having been here before, I asked if the ice cream was served in a bowl or cone.  Bowl she said, like that one, as she pointed to a normal looking ice cream bowl.  I'll have one scoop please.

You can tell by the shocked look on Betty's face ... the "how in the world am I going to eat THIS" look.  My face had the same expression.  GOOD GRIEF!!!  This folks, is ONE SCOOP! 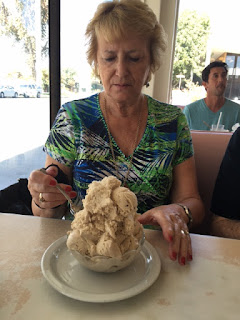 Kurt just LOVES ice cream, so he was beaming the entire time we sat there!!  There's no way we can eat this in one sitting.  No problem the waitress said, we have cups to go! 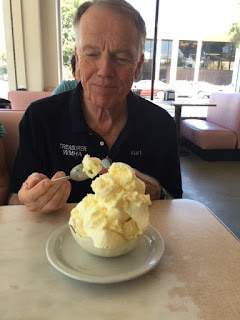 This was my chocolate bowl ... you can see the expressions pretty clearly here!!  I couldn't even eat half.  In fact, there was so much left over, it didn't fit in the to-go cup!!  After the first 50 bites, you really can't taste the flavor any more because your mouth is frozen. 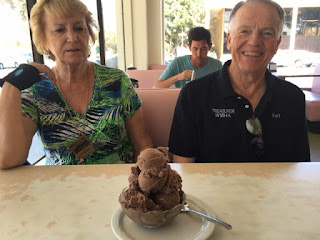 So the next time you happen by beautiful downtown Hanford, stop in at Superior Dairy Ice Cream Shop.  You might want to try the banana split with SEVEN scoops of ice cream, an entire bunch of bananas and half a gallon of sauce.  Bring ten of your good friends!!

I arrived home yesterday to intense heat and almost melted before I could get in the house and turn on the fans.  It didn't take long before I noticed this in my back yard.  That's funny, because out front there is so much water I expected to see alligators coming up from the grass.  Of course they mowed over the bog, so now it's full of deep ruts and I'm mad as a hornet, like the ones flying around my head.  They are EVERYWHERE!! 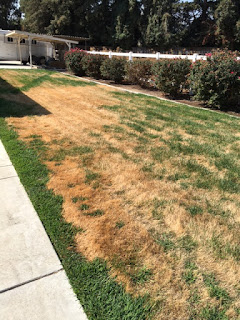 I called the gardner and insisted he come over immediately.  There were a million excuses, as you can imagine, but basically the GFI outlet apparently died a horrible death.  That's the one the sprinkler system is plugged in to, as well as my security lights.  You can't walk by a dead lawn and not notice it's dying, but they did, day after day.  Finally, TWO WEEKS later, they took notice when the entire front yard was brown and hooked up an extension cord.  Why didn't they call me?  It was that new phone, and my number didn't transfer over.  Yeah right!!

To combat the brown, they turned the sprinklers way up, causing the swamp and a new crop of moss.  They were hoping I would't get home until the lawn greened up.  I imagine the lawn will heal, but the ruts will not!!  Nor will the four beautiful dead plants ... I mean REALLY DEAD ... right next to the ones that seem to be fine.  How does THAT happen??

My gardner left with half the butt he came with, since I chewed him out royally!!  I've called an electrician to replace the GFI and I'm going on the offensive against the wasps.  Good grief ... can't a girl take a little vacation without returning to disaster??

Thanks for letting me rant .... there is still one more railroad to tell you about, but it will have to wait. The pictures are still in the camera, which is still in the rig.  In the meantime, I'm having a shot of happy juice in my morning coffee as I grieve for my poor dead plants!!