Boot Scootin' To The Beach!!

Once full of breakfast, we headed back over to Henry Cowell Redwoods State Park where we left the cars, walked over the bridge and jumped on the diesel train to the Santa Cruz Boardwalk.  It's about an hour's ride and it drops you off right at the center of the boardwalk. 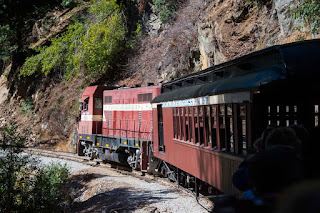 Along the way, you get to see lots of trees and steep drops to the river below as you listen to Beach Boys music from the 60's.  Our group of Golden Spike members took up almost two whole cars, some enclosed, some open to the breeze. 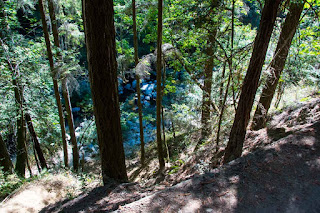 Just as you get to town, the train enters a long dark tunnel before taking up the entire street.  Cars just have to get out of the way.  With whistles blowing, we made the last mile down along the beach to our drop off point where 40 old folks disembarked to walk the planks of an old amusement park. 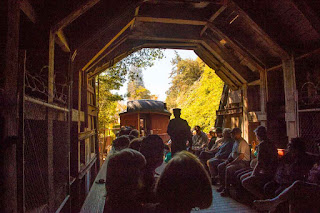 Surprise!!  All those old planks have been replaced by concrete.  The beach wasn't very crowded, and with waves like that, there weren't many people in the water.  This is where my mother put the fear of oceans into me.  If I go out more than a few feet, I'll be swept away and drown, never to return.  Yeah, my mom was good at that.  It took me nearly 50 years and five years of scuba diving to get over it. 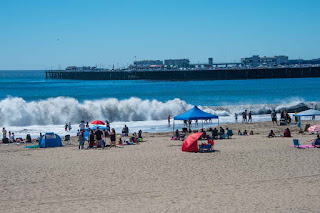 Patty, Dan and I took the overhead people mover to the far end, saving many steps down the boardwalk, which WAS crowded with people.  What a nice little ride with GREAT views.  Just don't kick your heels together as I did ... I almost lost my sandal!! 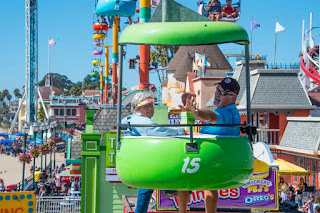 Once at the far end, we unloaded and headed out to the street towards the Pier.  The view was pretty nice to say the least, as these guys played volleyball.  I think there must be ten courts here to play on. Sorry guys, there were no girls playing! 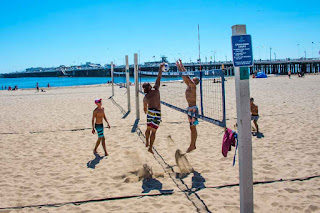 It's a little bit of a walk, but there are bicycle guys to give you a quick ride in a cart for tips.  As we walked toward the restaurants, we watched the weekend surfers crash and burn.  This is the beginners section.  You can see the line of cars at the top of the cliff.  If you have your vehicle, you can park here and watch the show. 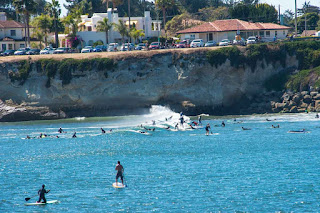 The Boardwalk has expanded quite a bit since I was here last.  They have torn down one large building and are in the process of adding more rides.  It's packed to the brim with carnival games, lots of little kid rides and every kind of food you can imagine.

Lucky us, there was a T-Bird car show at the end of the dock.  Remember this from American Graffiti??  There were new and old birds (not including us), along with a 50th Anniversary Model.  I prefer the black or pink myself. 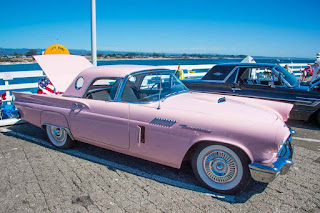 We stopped in at Fire Fish Grill for some yummy seafood before hanging over the side of the pier for pictures of this baby.  You don't usually see sea otters here.  This guy was eating up a storm. 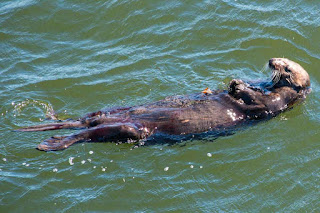 When finally done, he went directly to the dock below us, his own personal restaurant, and peeled off a huge bunch of barnacles.  He broke off one small piece at a time and ate it while balancing the rest on his stomach.  Fresh seafood for lunch!! 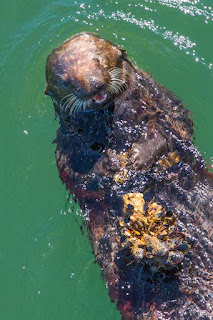 The under side of the wharf was stacked to the brim with sea lions and seals.  Even the narrowest piece of timber had a seal sleeping on it.  There was scuffling here and there as some got pushed off into the water.  Problem was, the tide was out and they couldn't get back up, causing loud barks and bites!! 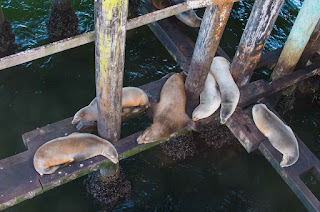 Look at these babies ... some balancing across open holes.  They all looked like they had a hard night, just like me. 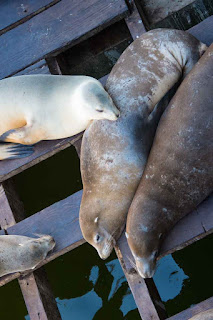 This guy must have had a boot scootin' night.  He was crashed ... I mean out like a light ... next to the caterpillar blade.  I'm sorry, but that doesn't look like fun to me!!  No telling where he left his right shoe. 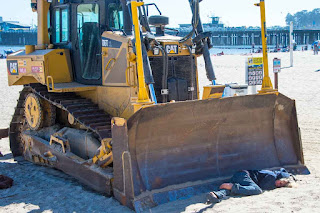 THIS on the other hand is GREAT fun!!  Deep fried twinkies .... what could be better??  I passed on that and opted for a Dole Pineapple Whip since it was so hot ... high 80's ... unusual for the beach!! 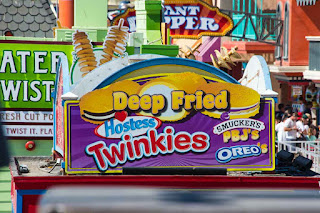 Although Patty was a little on the short side and could barely reach the opening, I was able to snap this quick pic.  Boy to have THAT figure again!! 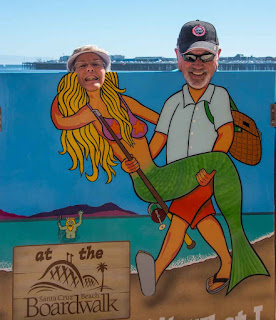 We bypassed the Big Dipper roller coaster at $6 a ride and loaded back up on our train for the return trip.   Wristbands to ride the tortuous inventions run about $30 for the day or $75 for a season pass. 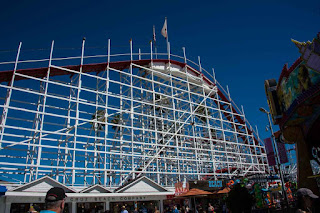 Once aboard for the return trip, an ambulance needed to access the wharf with the only route being the railroad tracks.  That required we back up over this bridge to give them room.  See that dumb girl on the track?  She and those two in front almost got run over.  The train doesn't have to stop ... YOU have to get out of the way.  She barely jumped on the concrete square to the left just before the train would have hit her.  Dumb dumb dumb!!  The other two would have been hit also, but they ran like their lives depended on it .... which it did!! 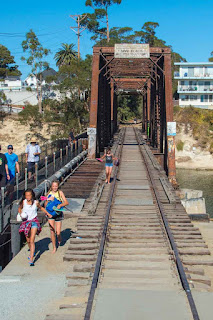 Back at the rig around 5:30, I crashed with the puppies.  We had another day of train riding at Swanton Ranch waiting for us, along with a couple of Garden Railroads to check out.  Whew!!!  I'm exhausted just writing about it!!

I've almost caught up on my email since surviving the black hole of no phone or internet.  I've been feeling totally disconnected.  Time to catch up on Words With Friends!!!