The Battle Of The Bee

When they say it rains a lot in Washington, THEY are right.  It poured night before last, with a short break, then dumped even more water for about five hours in the afternoon before letting up just at sundown.  Three times during the night I awoke to the sound of downpours and it continues as I type this morning. 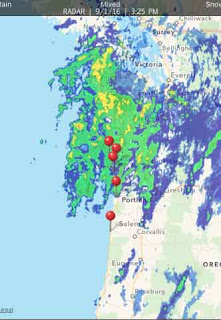 It's supposed to keep this up for the Labor Day Weekend, which means it will be even quieter as everyone stays in their rig trying to keep warm.  That includes me ... and that's what I did all day yesterday. 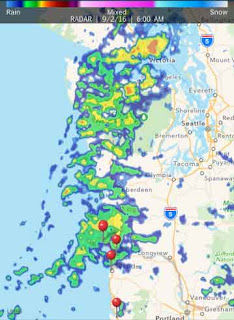 That doesn't mean it wasn't an exciting time ... I seem to attract weirdness.  Yesterday was no exception to the rule.  There I was, just sitting on the couch minding my own business, concentrating on my knitting since I had arrived at the hardest part of the pattern.  I hear bzzzzzzzzzzzzzz!!  Wafting around in the airspace three inches from my face is a bee ... not just any bee ... but a bruiser!!

Jessie caught sight of it about the same time.  She HATES flying things.  I guess that's just a terrier thing.  Whether a fly, mosquito or bee ... if it's within her territory, she tries to eat it.  YIKES!!  This is a BEE and could sting her in the mouth ... that's NOT a good thing.

I yelled NO as I jumped up and headed to the flyswatter drawer.  Everyone has this marvelous invention, right?  The handle extends making it ten times as hard to hit something flying through the air?  I swatted about twelve times ... felt it hit the intended target ... then realized the plastic broke at the handle end.  No problem for this handywoman ... I taped it up.

Try as I might to locate the bee carcass, I couldn't find it anywhere.  I think it went behind the couch.  A feeling of satisfaction ran through my bones as I KNEW I had saved Miss Jessie from a bad sting.  I went back to knitting. 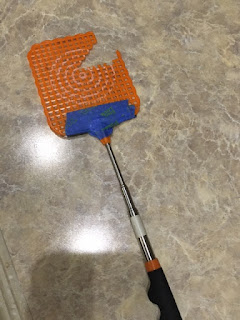 Suddenly, I heard bzzzzzzzzz.  Well for heavens sake .... where are you???  Bruiser again flew right in front of my face.  I'm sure I heard him say "nah nah na nah nah" as he flew even closer.  I grabbed the flyswatter again and the hunt was on!!  I chased him around the rig for fifteen minutes, swatting the air, which gave him even more forward thrust for escape.

That's when the flyswatter broke again.  It's pretty hard to get that little target on the flyswatter to hit the bee's backside.  When I hit the edge of the counter, a big piece of plastic fell on the floor.  The bee of course, flew away with Jessie hot on his tail and again disappeared.

In the middle of all that (squirrel), I realized my little violet was blooming in the front window.  How cool is that??? 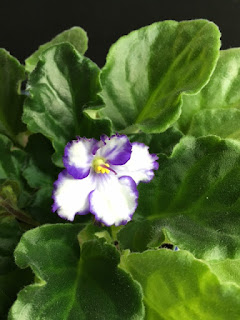 An hour later, poor Cooper thinks the world has come to an end with his Mom going crazy slapping the air.  With no bee in sight, we all sat back down and listened to the rain.  Bzzzzzzzzzzzzzz.

OMG!!!!!!!  I grabbed an old edition of the Gypsy Journal, rolled it up and went on the offensive as he flew out from behind the couch.  Finally .... SWAT!!!  But of course I couldn't find him.  When I moved everything off the kitchen counter, I spotted some movement at the same time Jessie did.  She was right on my heels the entire time.  SWAT again.  End of story. 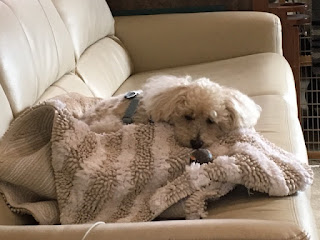 I held a little funeral and buried him in the trash can.  I continued knitting, the rain continued to fall and Cooper and Jessie dozed off into Never Neverland where they eat bees for breakfast!!

Posted by Nancy Kissack at 6:53 AM