Back at the Flavel house (pronounced Fla-VEL), I did sit in and watch the video for maybe two minutes.  I'm surprised no one else has seen the video either!!  I won't tell on you.  Mum's the word. 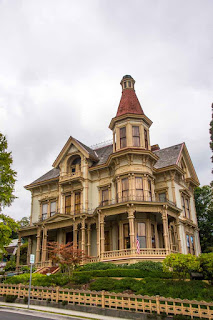 You would expect to see the iron work for the cupola ON the cupola, but apparently during a big storm, they were afraid it would come loose and hurt someone.  About eight feet tall, it stands at the end of the upstairs hallway.  The sunflowers stand for a good life, good health and a sunny disposition.  The docent needs to mediate on the sunflowers and become one with the spire.

The cupola is surrounded with windows, allowing the Captain a full view of all the ships coming in to the harbor, as well as spying on the neighbors.  The girls would climb up the stairs with him to wave goodbye to the ships.  There is an attic, but access is denied.  The Flavels had two staff members who lived there in very sparse quarters I'm told. 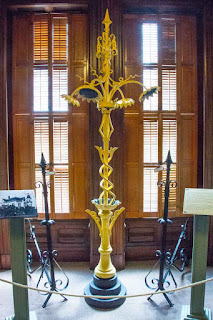 The kitchen was huge, but I'm sure had much more furniture in it's heyday.  The ice box on the left is rather small for big family gatherings, as is the current stove.  The big sink is to the right out of sight, as is a long table used for preparation. 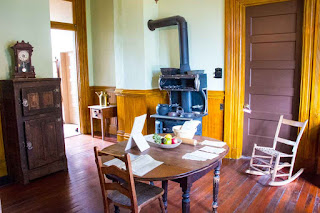 Way back when, Miss Patty and I scoured many an antique store looking for kitchen paraphernalia to display in our individual homes.  I'm pretty sure we had one of everything, with Miss Patty having two of three of everything.

This however, is something I've not seen in all my years of looking.  When attached to the table, the beaters stay about an inch above, leaving just room enough for a bowl.  Turn the handle and you can whip cream with the best of them.  Don't try to test it ... the docent has the hearing of a fruit bat ten miles away.  Don't open the ice box door either ..... she can hear the squeak!!  It wasn't me. 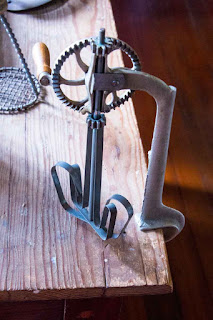 Upstairs in the main bathroom is the only bathtub in the house.  Every bedroom had their own wash basin, but there was only one tub.  They only took a bath once a week anyway. 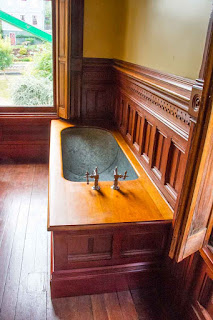 This is the only commode in the house also, but had modern flush plumbing.  See the box above on the left?  That's the water container.  Of course I tried to lift the lid ..... very quietly ...... but it's nailed down.  I'm like that ... risking the wrath of the gestapo!  It is true however, that if everyone lifted or opened something, it would quickly fall apart. 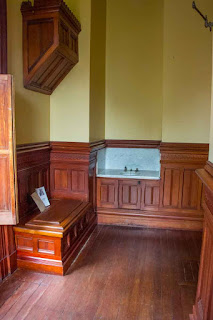 There were several hair wreaths, in fact one in every room in the house.  Unfortunately, I couldn't see them with my glasses, let alone the camera, due to low light.  There are lights in every room, but they use the smallest bulbs and keep most all the shutters closed, making it VERY dark.

Here's an unusual piece.  There are maybe ten stuffed birds under this glass dome.  This is one I've not seen that before. 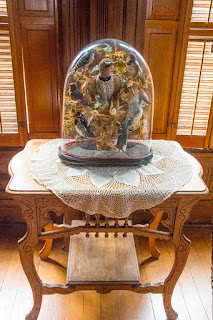 Nor have I seen the unusual stuffed parrot in the bedroom closet .... ANYWHERE!!  It's a good thing Jonathan doesn't accompany me.  Makes me wonder if this was one of the original furnishings. 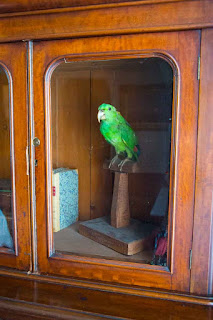 While wandering around through the kids playroom ... this place is really huge ... I spotted the painter through the window.  I waved ... he waved ... I took his picture ... he waved.  We had a nice conversation through the glass about getting paid double for working the holiday, until I discovered he was the boss.  I had to cross my heart and pledge not to talk to any of his crew. 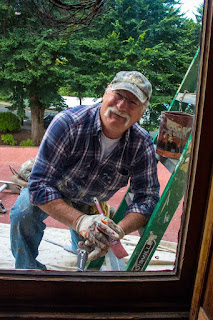 After promising three times to watch the video, I returned to the carriage house, gave it another cursory look while I tried to talk the Manager out of a particularly cute display rack they had.  Since she was having none of it, I gave the video another 10 minute shot.  It told me everything I already knew from reading the notes in the home.

It was fascinating to note that the fence around the property is made completely of wood.  Wood that needs to be painted also.  I don't know if it is original ... I was afraid to ask any more questions, so if you visit .... please ask for me!!  But say YES to the video question first!!

My kite lesson went good and bad.  Bad ... no wind, then bad because I just couldn't get my mind wrapped around what we were trying to do ..... good when I changed to a different kite and did a little better, then bad again at the end ... frustrated and tired.  That may have had a lot to do with the fact that my tire was low on air AGAIN!!  I didn't drive on to the beach for fear of a flat.

On my return to the RV park, the manager pumped it up for me with the coolest little Ryobi pump.  This morning I will run to the Tire Shop again and hopefully get it fixed before my 10:00 kite lesson. Maybe I should be meditating and become one with the sunflowers too!!