Well let me tell you, there's nothing more fun than spending Christmas SICK!!  I opened lots of packages of kleenex and had many glasses of advil cheer!!  Other than that, I never got off the couch!  Oh wait ... twice I let the dogs out and once I totally lost control, my mind in a haze of medicinal madness, when I ate a huge bowl of ice cream.  That was the highlight of my day, which should have been the cure of the decade were it not just plain vanilla.

I was afraid Santa wasn't going to make it yesterday, between the rain, hail and lightning, which I only noticed when the dogs jumped off the couch and my ears cleared for two seconds!!

I kept wishing everyone Merry Christmas on Facebook, but my phone battery would last for all of 15 minutes before needing to be recharged.  I was really wishing "I" had a recharger about that time.

Finally the day passed as I sat in anticipation of the full moon I was going to photograph.  I got all set up, when my fuzzy mind cleared for a millisecond, at which time I remembered I had already loaded the telephoto lens in the rig.  I dashed outside in a flash and slogged through the water, only to realize there was heavy cloud cover.  RATS!!!  I set up anyway!!

As I stood on the porch mouth breathing and moaning, what to my wondering eyes should appear, but the MOON in all her glory!!  This is it ... Christmas 2015 full moon.  Isn't she a beauty???? 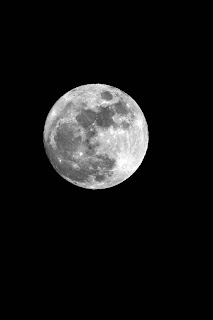 All of a sudden I thought I heard the jingle of bells ..... then a voice barely audible.  On Dasher, on Dancer, on Donner and Blitzen.  NO WAY!!!  It CAN'T BE!!!  As I glued my watery eye to the back of my camera, what should appear, but a miniature sleight and eight tiny reindeer!!  SANTA!!!  I snapped away as fast as I could!! 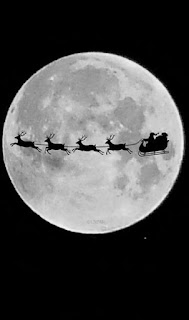 As I moved the camera to get a better shot, in the blink of an eye from two sneezes, he was gone!!!  I took a few more shots just in case he came around for a second time, but alas, Santa Claus was on his way to finish delivering toys.  I went back inside, laid the camera on the table and collapsed on the couch.  With the fireplace going full blast, sucking every last drop of moisture from the air, I watched Bad Santa reruns. 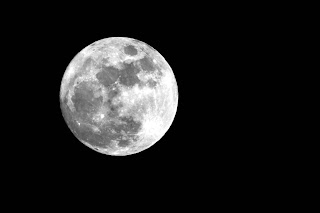 I coughed and sneezed, then grumbled about being sick as I downed another shot of advil.  A shot of something else probably would have done me better, but that would have required a trip to the store which just might scare the Christmas out of any little kids in the general area.

I'm not sure what's on TV today, but you can bet your best Christmas gift I will be on the couch for whatever exciting parade or movie rerun there is, along with my listerine, bowl of hot water, advil and vegetable beef soup.  For dinner, I'm going to splurge on a Jimmy Dean Mac 'N Cheese frozen entree.