Christmas On The Couch!!

This was my view for most of yesterday.  Spending Christmas on the couch was clearly not what I wanted to read in the cards for me.  I was up rather early, wrote the blog and staggered to the couch, sneezing all the way.  At last count, 53 times .... those really hard sneezes that shake your brain.  I'm pretty sure a couple ounces disappeared into thin air, as I've totally forgotten my routine this morning, hence the late blog posting. 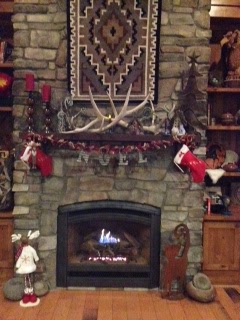 My baby puppies stood by me through thick and thin, wads of kleenex and sound barrier breaking sneezes, not to mention the moaning and groaning.  The steamy water that seemed to work in previous days, did nothing to relieve the symptoms.  I was out of old home remedies and relegated to the couch to wallow in self pity. 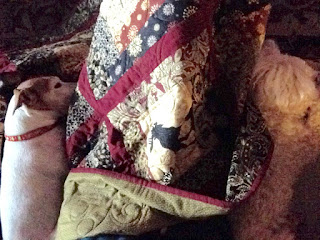 I watched every Christmas movie again, caught several episodes of Jamie and Adam on Mythbusters, as well as sat through a few of John Wayne's oldies but goodies.  Finally, when one side of my head cleared, I got the brilliant idea to fix a Christmas dinner.  I had this tiny turkey in the fridge and one lone sweet potato.  I'm SURE I can make a feast out of this!! 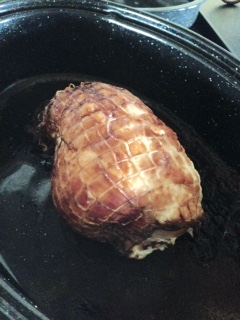 That's what happens when you've got a bad cold.  Your head is stuffed so full of "stuff" that your brain gets squeezed too tight, making you think you can do things you should KNOW you can't!!  In spite of my oven setting of 400 degrees to cook the turkey at 325, it came out surprisingly well.  The sweet potatoes were another story.  It was a Spice Islands recipe that sounded really good .. pecan pie potatoes.

Trouble was, I didn't measure very well, I was in a hurry and my brain was in a fog.  I think I added twice the amount of flour and half the butter for the topping.  Then, just because, I loaded it up with marshmallows.  It looked pretty nice when it came out of the oven, but in two minutes the marshmallows dissolved totally into the burned flour at the bottom of the pan.

I was so determined to have a nice Christmas dinner that I ate it anyway, along with some really nice turkey and broccoli (the only vegetable I had in the house).  I'm really not sure how any of it tasted, because you see with a bad cold, you can't taste anything!! 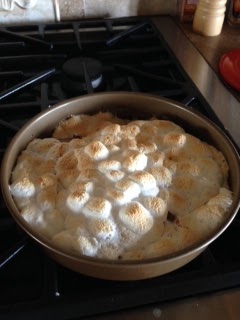 And so I passed away the hours on the couch, sneezing and sniffling, only feeling better when I received an email that some very nice person had left a comment on my blog.  You folks kept me going through my worst day this year, and for that I THANK YOU from the bottom of my heart!!

The good news is that I slept fairly well and my head isn't pounding like a sledge hammer on an anvil.  I can even ... almost ... breath through my nose.  Unfortunately, it's moved down into my chest and it's time to let the coughing begin!!!  Three days and counting!!