Time for a Parade!!!

The World Champion Giants came home with a roar!!!  No matter what the city, the baseball champs are welcomed home with a ticker-tape parade and lots of pomp and circumstance!!  Thousands of people flocked to San Francisco yesterday for the big event.  Having gone through this in 2010, I chose to sit this one out at home.  The traffic from people going to work is crazy enough, but add to it another million people and it's too crazy for me.  Fans were lined up at 2:00 am in front of the Civic Building to claim their perfect vantage spot.  What they didn't know is that everything is blocked off around the building for over one full block.  That then, is the closest you can get ... at the edge of being able to see nothing and hear nothing!!!  So I watched it all on TV and had the BEST vantage point!!!  I even yelled and whooped it up a little!!  These are all I-phone pics so you can see the festivities. 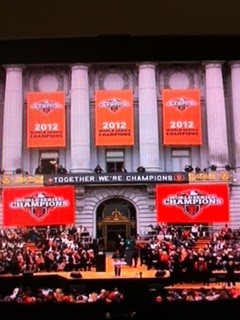 The parade was great ... this year they all rode in cars driven by San Francisco Forty Niner Football Players, a great improvement over last years Trolley Cars where you couldn't see the guys.  They drove up Market Street from the Ferry Building to the Civic Center, I think about 3 miles maybe?  Fans lined the street on both sides chanting "Lets Go Giants" over and over.  At the Civic Center, they were all introduced to screams and yells that you could barely hear on TV because they were so far away.  Boring boring speeches by the Mayor and Upper Management ... you would think THEY won the trophy ... and FINALLY they got to the REAL winners ... Bruce Bochy and the Team!!  I didn't think to take pictures until later in the program ... here's Hunter Pence, the Preacher, a recent addition to the team.  He preached constantly to play for the name on the front of the jersey, not the one on the back.  Boy did that work well!!! 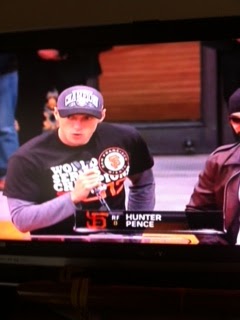 Blanco, outfielder and Lincecum, pitcher.  You can see by the pictures, they are all individuals!!! 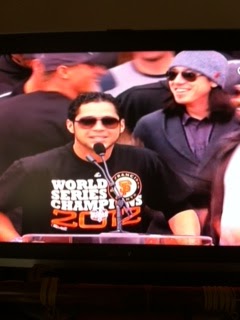 Vogelsong and Posey, pitcher and catcher ... basically responsible for winning everything.  Buster Posey played every playoff and world series game except one.  He's the one calling the pitches, and he's VERY good at his job ... besides that, he hits home runs quite often.  He didn't play at all last year due to a broken foot from being slammed at home plate. 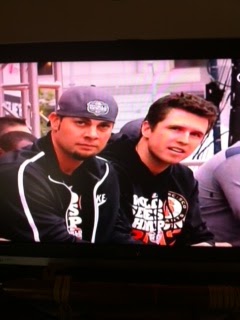 Finally, they all gathered around the trophy for pictures.  Certainly wish I could have been in the front row ... the one that was a block square and was practically empty ... the fans weren't allowed in that area, and unless you had a 400mm lens, you missed these pictures .... 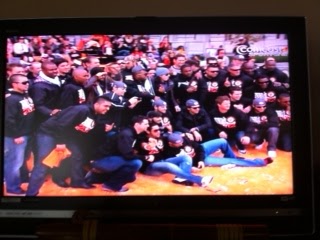 The guy on the left with sunglasses looking like he's holding a flag, is Pablo Sandoval, Panda Bear to his fans.  He's holding the World Series MVP trophy.  In game one ... three times up, three home runs!!!  In 2010 he didn't get to play in the World Series ... he made too many errors, many said due to his weight.  So he lost 50 pounds and came back swinging!!!  Bottom right with red hair ... pitcher Matt Cain.  Threw a perfect game ... first time in 45 years of baseball history.  Next to him in the sunglasses, my favorite Barry Zito.  With a $127 million contract, his pitching went downhill and he didn't play in 2010 either.  At the beginning of this year he completely changed how he throws the ball ... and was responsible for the winning game that got them back on the road to winning the World Series.  So many stories about these guys ... it's what keeps me going back every year. 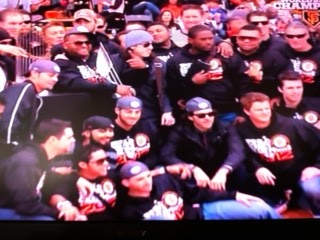 Pretty bad pictures taken of my TV with my phone ... but better than I would have gotten in San Francisco!!!  Finally, our old friend Tony Bennett came to sing the famous song we hear at the park every single time the Giants win a game ... "I Left My Heart in San Francisco".  Can you believe it???? This man is 86 years old and still sounds like he's forty. 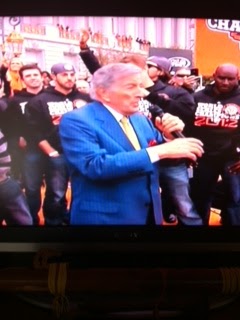 When Buster Posey stood at the podium three years ago and said "lets do it again!!", no one really thought that would become a reality.  The three west coast announcers, all radio and television personalities including the great Vida Blue, admitted that not one of them thought the Giants would be here ... and yet here they are again ... because they played for the name on the front ... not the name on the back.  An amazing diverse group of men ... it's been my pleasure to know them!!!

Posted by Nancy Kissack at 8:22 AM