All Quiet on the Central California Homefront!!

Not much going on here except cold and rain.  I'm supposed to be on a training schedule for running another marathon next year.  Of course shopping and decorating take a front seat, so I'm a little behind. This morning, after turning off my sprinklers which were watering my already soaked front yard, I headed out the door for a four mile run in the rain.  It wasn't bad actually since I run better in really cold weather.  It was running against the wind that slowed me down considerably.  Once done, you feel great ... for about 30 minutes ... then the achey breaky pain hits.  To combat the after affects, I take a product called Recoverite by Hammer.  It's specifically designed to reduce the inflammation of torn muscle fibers and promote healing and rebuilding.  Sounds awful ... and it is.  No one said running was pain free ... it's fun, but it hurts!!!  And trust me, this stuff tastes like crap!!!  LOL   It does, however, work, so I hold my nose and chug it down, followed by breakfast.  In about 4 hours, I should be able to stand up and walk again!!!! 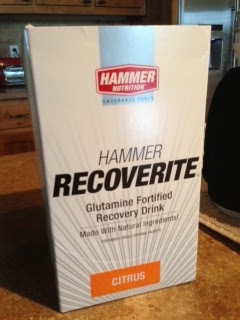 Not being able to get out due to the weather, I decided over Veterans Day to set up my Christmas Tree.  Since I'm in the "back to my roots" mode, I scrounged around until I found western and cowboy type ornaments.  This is no small task, since the tree is 8 foot tall.  I know ... it's not real!!  I would love to have a real tree ... but over the years I've cleaned up enough pine needles.  I put on one row at a time, then run the lights on that row.  Much easier this way. 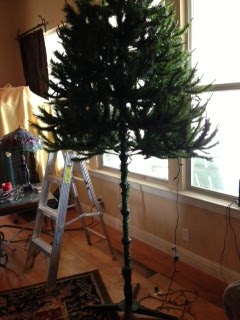 While putting the tree up, I thought it might be a great idea to use my healing rope as garland.  There are two kinds of ropes used in working cattle ... heading and healing.  Just as it sounds, one is used to catch the head and one to catch the heals, each having a different construction and feel.  The length was just perfect!!! 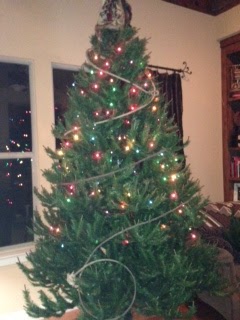 More lights, some ribbon and ornaments and it started to look pretty good.  A trip to Beverlys Fabrics  resulted in a dozen cute ornaments at a sale price of $3 each, however on a later trip to Walmart I found more of the exact same type for $1.97 each.  I'm beginning to like Walmart more and more!! 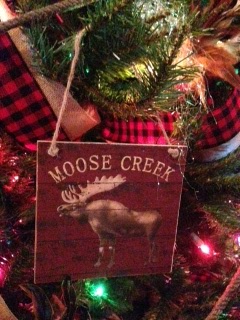 Almost done, I just need the last box of ornaments.  Too bad I can't find them!!!  Last year I decided to put them somewhere in the house instead of the garage.  That wasn't a good idea at all, because now I can't find the last box.  Oh well ... I'll keep looking!!  I have a few days left. 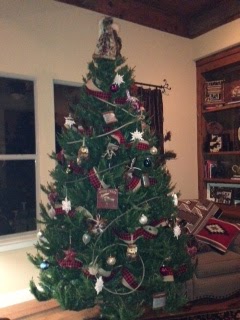 All this hard work deserved a cookie ... except I didn't have any.  A quick check of the kitchen and I had all the ingredients to make these Apple Oatmeal Butterscotch cookies again.  These definitely don't help my running, nor my eternal weight loss program, but boy do they taste good!!! 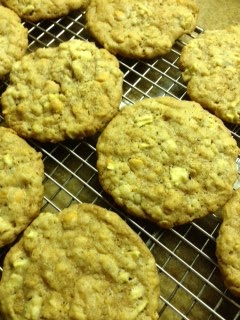 I'm starting to stiffen up all over, so best get up and moving or I'll be perched on the couch for the next two days.  Thanksgiving is coming and it's time to hit the grocery store for supplies.  Maybe even Walmart to see if they have any new ornaments!!!!
Posted by Nancy Kissack at 9:51 AM