I had an appointment in Palo Alto early today, so decided to drive up yesterday and spend the night.  Traffic over Pacheco Pass was at a standstill clear past Casa De Fruita (for those that know the area).  So I went on towards Hollister, crossed the valley and onto Hwy 25 which goes to Hwy 101.  A speeding pickup truck crossed the railroad tracks, causing his load to bounce into the air, enough that the sheet of plywood became airborne and headed straight for my windshield.  I had about 2 seconds to react, swerving to the right and braking.  It missed the windshield and hit me here on the drivers side, ripping the side mirror off.  About 18" from my head, it scared the you know what out of me.  When it hit, the jeep went back across the road ... thankfully people there saw what happened and got out of my way until I got it under control ... but NO ONE stopped.  Not the truck or any other vehicle.  I can't believe the car behind me did not get hit ... or hit me when I hit the brakes ... but they didn't stop either.

I grabbed my phone, dialed 911 and got a CHP officer headed my direction.  He wasn't of any help either ... wouldn't even write up a report.  For my insurance company???  Please???  Nope ... no witnesses, nor did anyone even bother to call 911 and report it except me. 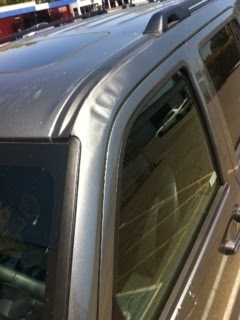 Most of the roof is scraped, you can see the dents in the top panel, the black roof rack is torn up and the side mirror totally ripped off.  A lot of paint went with it. 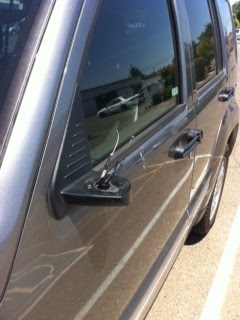 This is my BRAND NEW 2012 JEEP!!!!!!!!   I haven't even had it 3 weeks.  I cried!!!!  The CHP officer said I could still drive it, just be careful.   Really???  So I drove on to Palo Alto ... and I finally stopped shaking about 10:00 this morning.  I called my insurance company (closed for the holiday) whose automated answering machine said to press 2 for an emergency.  When I did, it told me it was an invalid selection.  I tried it three times ... it was still invalid.  So I drove back to my home this morning, finally got my insurance rep on the phone (complained about the phone system) and went to get an estimate.  $2500 ... my deductible is $250.  If I could get my hands on that guy I would strangle him!!!   NEVER EVER haul plywood in your truck without tying it down you stupid idiot!!!  Although I would have said that in MUCH stronger terms (as my friends know!!).

The part that bothers me most is this bump inside the driver side car frame.  It wasn't there before ... which means that piece of wood hit hard enough to bend the frame of the car. 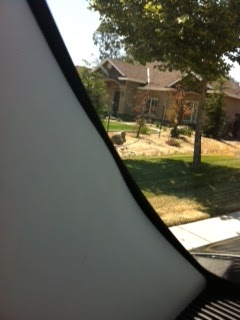 The sad part is I had scheduled a trip, which is now cancelled.  It will take two weeks to get the car fixed.  I guess I should be thankful I'm alive ... but really, I'm just pissed off!!!!!!!!!
Posted by Nancy Kissack at 3:38 PM