Tale of the Bella Toad!!

Having finally purchased the 2012 Jeep Liberty (her name is Bella), I was ready for the tow package installation.  Of course I checked with my mentor ..... and the Roadmaster Sterling All Terrain Tow Bar seemed to fit the bill.  AND ... it's on sale at Camping World ... how cool is that?  I had two choices.  Drive to Rocklin (3 hours) or drive over Pacheco Pass (ugh .. 2.5 hours).  I chose Rocklin!!!  After a two week wait, they called and told me when to arrive.  A Monday morning appointment at 8:00 a.m. sounded like a 4:00 a.m. wake up call to me, which is not in my vocabulary, so I asked if I could spend Sunday night in their parking lot.  They were most accommodating.  My friend Chris drove the jeep while I drove the motorhome.  There were two spots left in their lot when we arrived at 9:00 p.m.  It was then that I realized we were parked about 20 feet from Hwy 80 to Reno.  Do you have any idea how many trucks and cars go to Reno after midnight?  I do, cuz I counted every one!!!  NO sleep THAT night!!!!!   Monday morning bright and early, Miss Jessie kept watch on the birds. 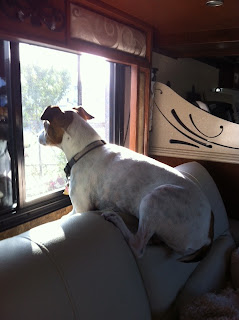 After two hours of "throw the ball mom", Cooper finally settled down in time for us to get a cab to the mall.  The Service Guys said 6 hours for installation, so we might as well shop since we have no TV. 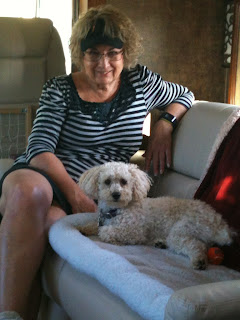 At noon, they called and said it was complete.  WOW ... two hours early!  That's service!!  After 30 minutes of explanations as to how to hook and unhook the tow vehicle, I spent another 30 minutes trying to remember how to put the transfer case in neutral.  Of course the instruction book is on the table at home, so I called guess who ... Dan ... and wrote down all his instructions, which worked perfectly.  This unit is VERY nice ... the top bar comes off and with a twist of the wrist, so do the brackets, if you so desire.  I don't.  That thing is on there for the life of the vehicle!!! 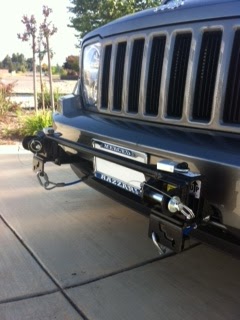 I can't begin to tell you how nervous and stressed out I was about towing this thing.  Maybe it's because the freeways around Sacramento are AWFUL ... or there's too much traffic ... or I can't back up AT ALL ... I have to make wider turns ... I don't know how far to get ahead of trucks before I pull back into my lane ... or maybe I really don't want to see my new Jeep passing me on the freeway on it's way to a big hairy crash!!!!   And off we went!!!!!!!  Looks like it's floating in my rearview camera. 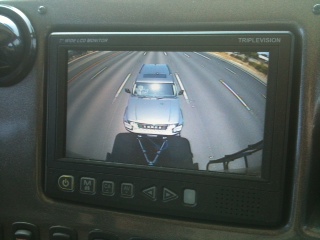 We made it home 3.5 hours later because I refused to go over 55 mph.  It didn't come undone and I could hardly tell it was there.  I was so stressed when we got home though, that I immediately unhooked everything before I forgot how to do it ... and didn't even get ONE picture!!!!  Don't worry ... next time I take her out, I'll post Bella Toad looking pretty behind Mobile Buzzards Roost!!!!
See .... women CAN drive big RV's and CAN tow the toad!!!!  Just give us lots of leeway on the freeway!!
Posted by Nancy Kissack at 7:30 PM