First order of the day (Wednesday) was a trip to the two antique stores in Quincy.  I can't pass one by, and had done my research.  There are only two.  What I didn't know was one is open Friday and Saturday and one is open Thursday through Saturday.  So to satisfy my craving, I stopped in at this sweet shop.  Trust me, it was well worth it. They had the best raspberry lemon bars I've ever eaten.  If you get a chance to travel through Quincy, be sure and stop here.  It's on main street and you can't miss it. 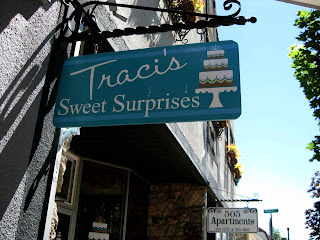 From here we were off to Meadow Valley.  I'm sure they don't exactly call themselves a ghost town, but this Mercantile Store looks like it was closed long ago. 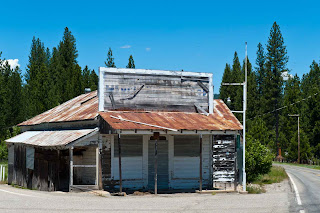 It sits on the corner of Silver Creek and Buck Lake Road.  There is still quite a lot of snow on the mountains here.  A short drive from this intersection we ran into 3-4 feet snowbanks. 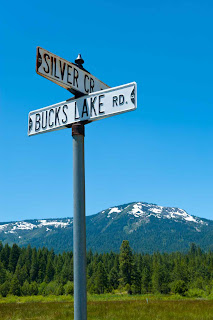 I asked about old cemeteries in this area and was told to head to Meadow Valley where the Pioneer cemetery was located.  Most people probably wouldn't think of visiting the local cemetery, but you would be surprised at the interesting tidbits you can find out about the area. Surrounded by large redwoods, it was a beautiful location.  It appears this area was settled around the early 1800's.  If you were an original pioneer, your headstone so stated.  Most gave the name of the state you were from ... Missouri, New Wales, Nebraska ...   Some were WWI veterans, but most were aged 5-20.  One family lost four of their children within 5 days.  We assume cholera or some disease.  Several stated tuberculosis  and pneumonia. 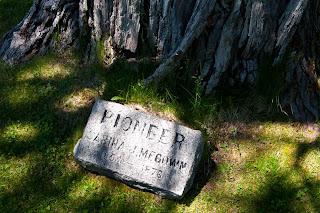 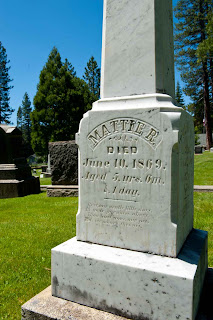 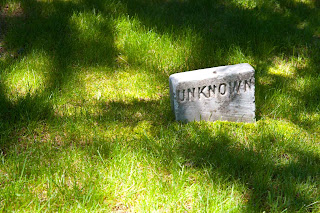 Probably the most interesting were many ... possibly 12-15 ... only said "Unknown" or "Mother".  No one will ever know who was buried here.

Back to the RV park for food, food and more food.  The "munchie hour" was beyond munchie ... it was dinner in full, following by potluck desserts.  How could we miss that!!!!   To finish off the day we played Rock Races.  For those that don't know what this is (I didn't either) ... you can see the race course in this photo. 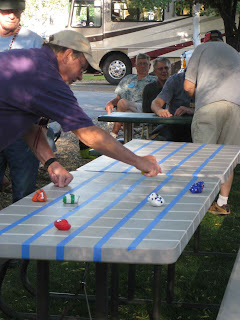 You bet on which rock you think is going to win, numbered 1 through 6, and keep your winning ticket number.  Each person betting rolls the dice.  Whatever number comes up, that rock moves one space.  Each dice counts ... so if you roll a 4 and a 5,  both rock 4 and 5 move up one.  Whoever gets to the end first of course, wins.  The pot is split between the winning number holders.  Changes in the rules ensued,  after bets were placed, making it impossible to pick a winner.  Sometimes whoever was last would be the winner.  Pure luck rules this game.  It was a nice way to end the day ..... losing $2.00!!!
Posted by Nancy Kissack at 8:16 PM