It seems like just yesterday, I watched as this tragedy unfolded on television, but it has been 19 years since the bombing destruction in Oklahoma City.  We went to visit it right after we arrived. 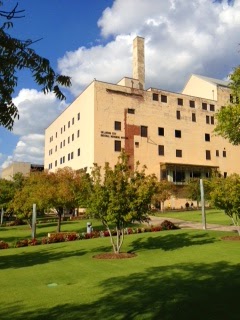 Leaving Eufala Lake ... which was a huge lake by the way ... we got so many bugs on our windshield that I didn't want to spend 15 minutes on each picture in photoshop, cleaning them up.  Consequently there are ... 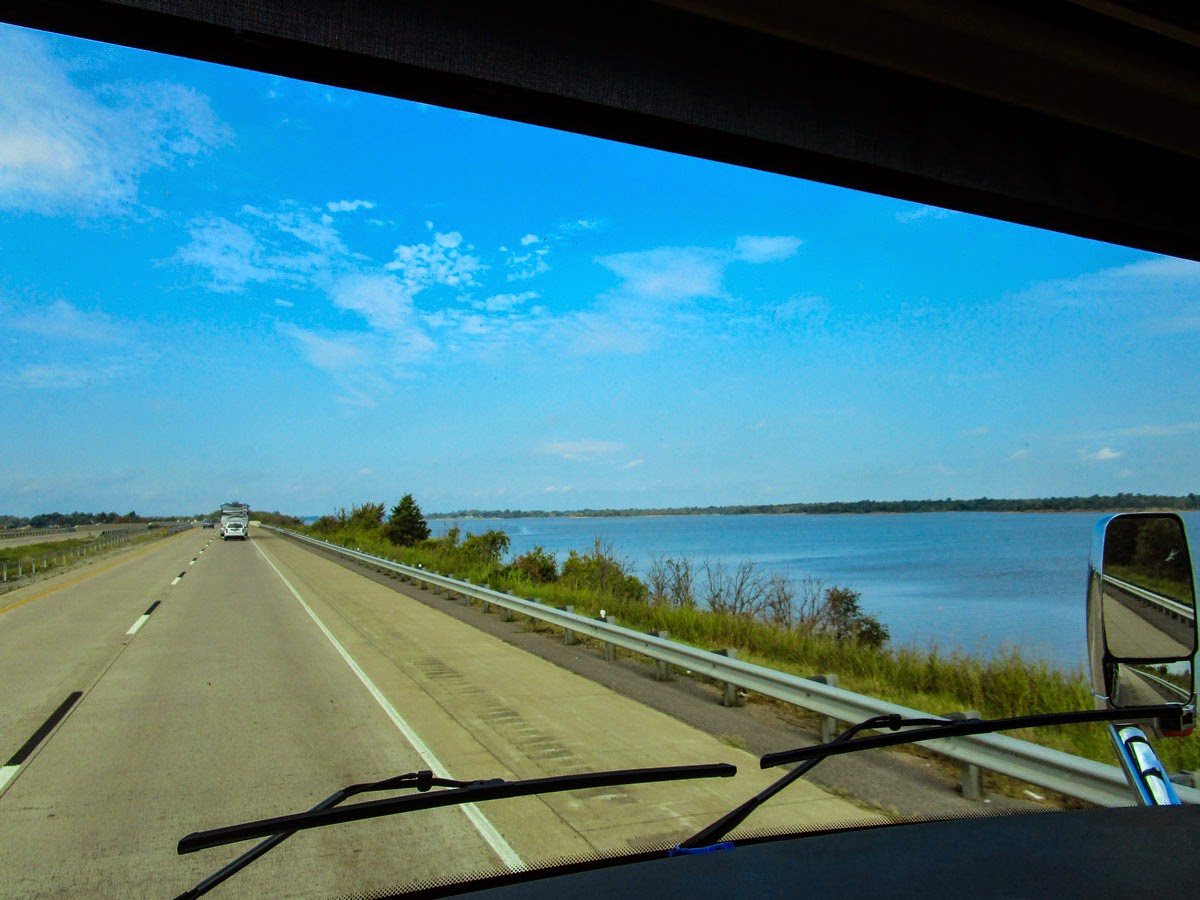 only two images of the Oklahoma countryside!!  It was beautiful, but we have definitely left the forests of trees for the farmland.  We arrived at Walmart in Oklahoma City where we parked while Tom and Barbara checked out the local Moose Lodge for parking.  Making some extraordinary turns and executions around obstacles, we were able to LEAVE Walmart for the Moose parking lot.  I always check the electrical service before leveling and putting the slides out ... but this time I didn't ... and my electrical box was out of order.  Again borrowing Tom's extension cord, I plugged in to the 30 amp working receptacle. 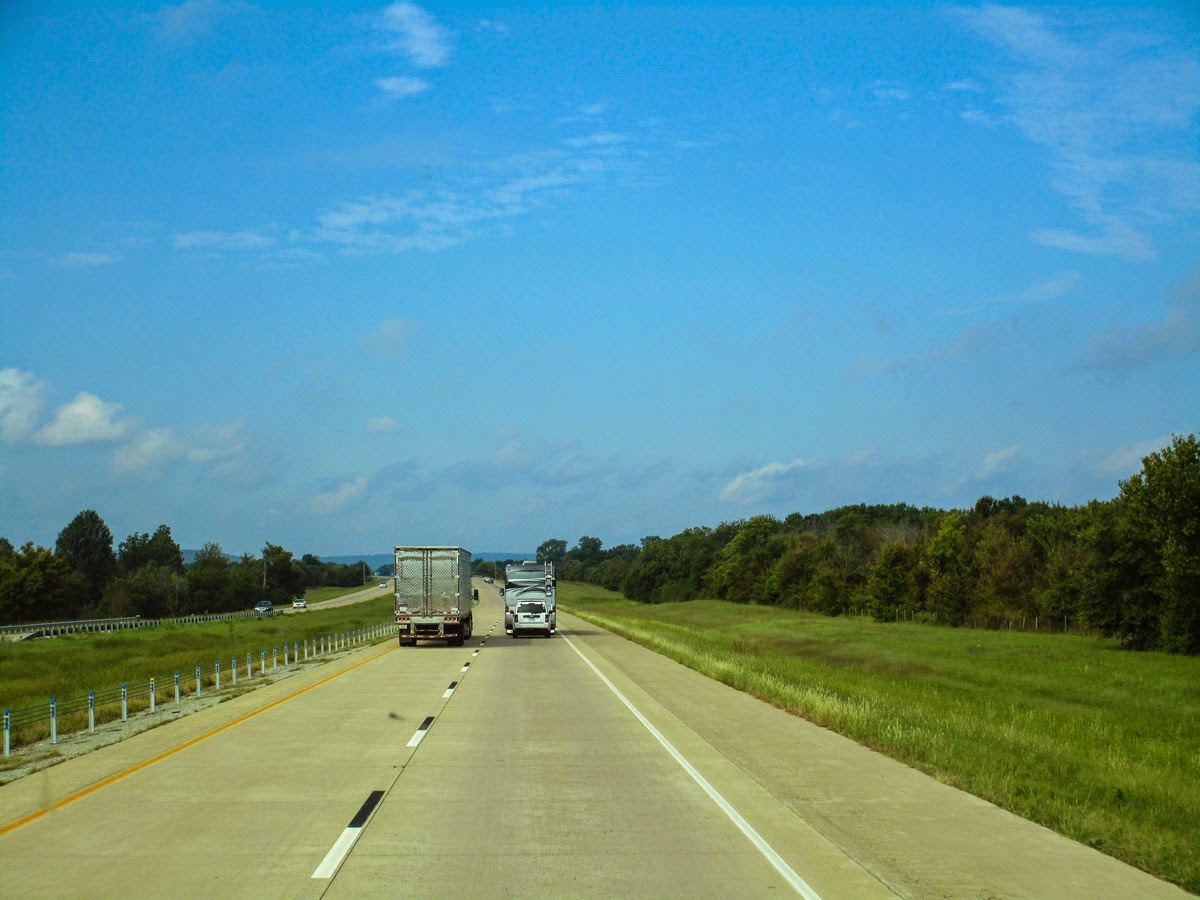 Our first stop was the best Mexican food we've had on this trip (in Oklahoma, can you believe it?), at Ted's Cafe Escondido.  I've never seen a waitstaff work so hard, so fast.  They were amazing, as was the food.  The second stop was at Camping World where I got my OWN 50 amp extension cord!!

Then we went to one of the most amazing memorials I've seen ... Oklahoma City National Memorial where the bombing took place. 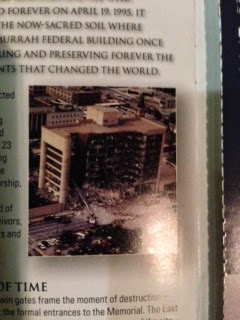 The museum is housed in the building across the street from the Murrah Building which was destroyed.  Unfortunately we arrived too late to see the museum.  Inside is a wall of displays showing each person's picture and something personal of theirs.  One lady left her mothers box empty to show the loss she felt.  One mother who lost her one year old daughter said she almost couldn't remember her any more.  I just can't imagine the loss these people feel. 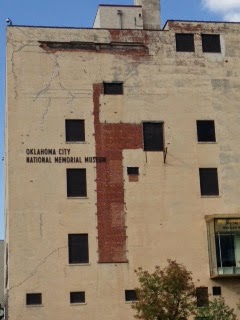 As you go up the walkway, this entire wall is covered with flag and handprint tiles of children, sent here in 1995 to show their support. 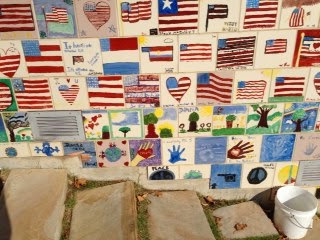 The memorial covers both sides of the former street, now a long reflecting pool, with the Oklahoma skyline in the distance. 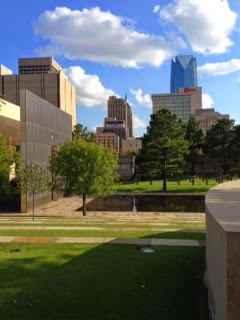 This is looking across the "street" at where the building stood.  The chairs have the names of the victims and are organized by the floor where they were found.  Smaller chairs represent the children in the day care center. 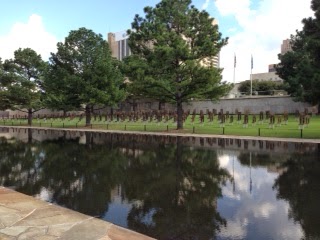 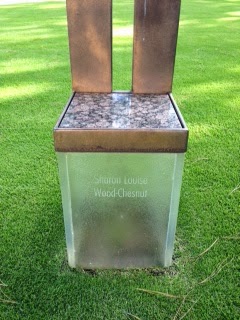 Two gates, one at either end of the reflecting pool have a minute in time carved on them.  9:01 for their innocence on one end and 9:03 on the other ... they will never be the same. 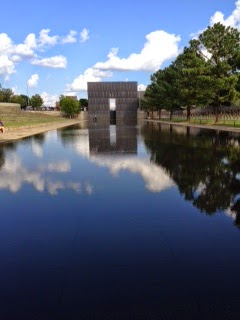 It was so quiet and peaceful here, even in the middle of the city.  The reflecting pool did it's job beautifully. 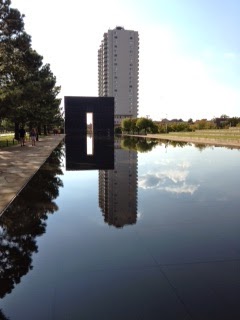 This tree across the street from the destruction, survived the blast and continues to thrive.  This is the Survivors Tree in a courtyard not far from the remaining walls of the Murrah Building where survivor names are engraved on marble taken from the building lobby. 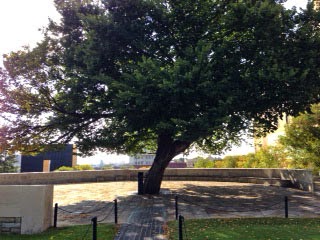 Even part of the original chain link fence still stands out front, where people place items to this day in remembrance. 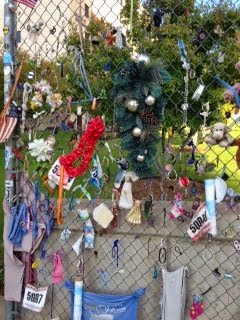 In a rush to get out the door, I again forgot my camera.  Actually, I didn't really realize we were going here until it was too late, so I apologize for all the iPhone images!!  My photographers eye however, kept drawing me to the fire escape behind the memorial.  I imagine many people came down these steps in a rush to escape.  In the very first picture, the red brick shows where two other buildings were attached to this one, both raised due to structural damage.  This fire escape is to the right hand side. 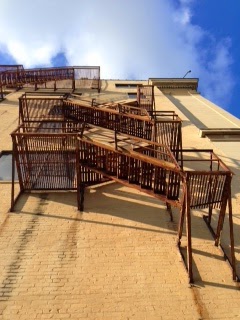 This memorial was very well thought out and executed.  I choose to not even mention the names of the perpetrators, except to say one was put to death by lethal injection (too good for him) and the other was sentenced to life in prison (also too good for him).  A third only got 12 years, so must be out by now and the last received immunity for testimony.

My heart goes out to those who lost family members here.
Posted by Nancy Kissack at 5:54 AM