It was a beautiful Sunday morning and the sun was shining as the neighbors took two hours to pack up and head home.  We stayed an extra day, giving Barbara and Tom time to plan our direction and my foot to heal up a little more.  Sunday being a day of rest ... that's exactly what we did!!

This cutie trailer remained one more day also ... the back of this rig says PlayMor Mansion, with '69 Jenny printed below.  I didn't have the nerve to ask him for an inside tour. 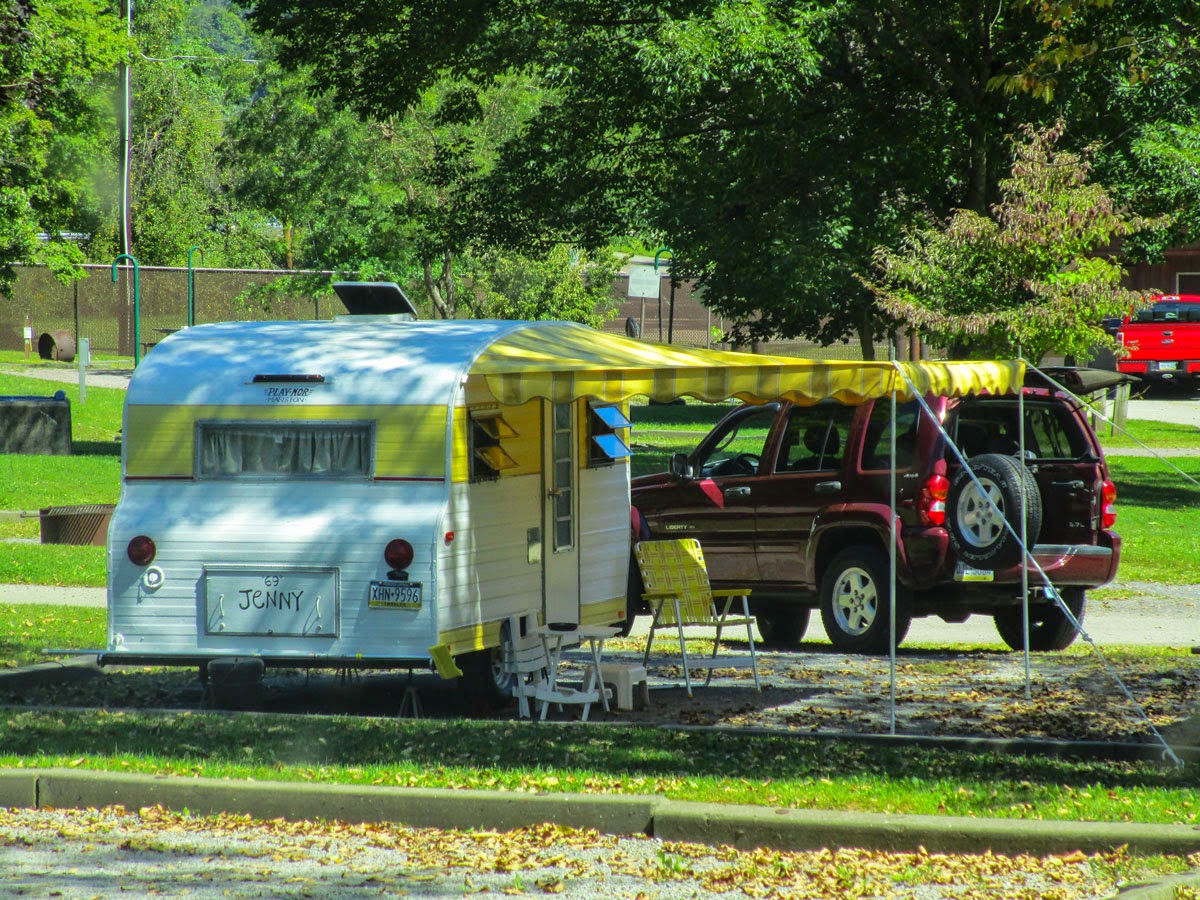 Look Ma ... No boot!!!  My foot has improved ... the swelling has gone down and I can actually get a sandal on and walk with a much less noticeable limp.   It's still black and unfortunately I didn't do a great job of setting the toe, as it's kind of crooked ... but at least it's healing quickly, thanks to Nurse Patty Chance's telephone consultation!!

For those who don't know, there are many Corps of Engineer campgrounds on the East Coast with sites large enough for big rigs.   Our sites had a big fire pit, picnic table and crook to hang lights.  Water is available at the check-in building and they do have a dump station.  For $11.00 a night with a National Park Pass, including either 50 or 30 amp electrical, it's a great deal.  Beginning Monday, the price falls to half again.  There are also plenty of sites for tent camping, but when the rain started pouring from the skies Saturday, most of them packed up and left.  Can't blame them!! 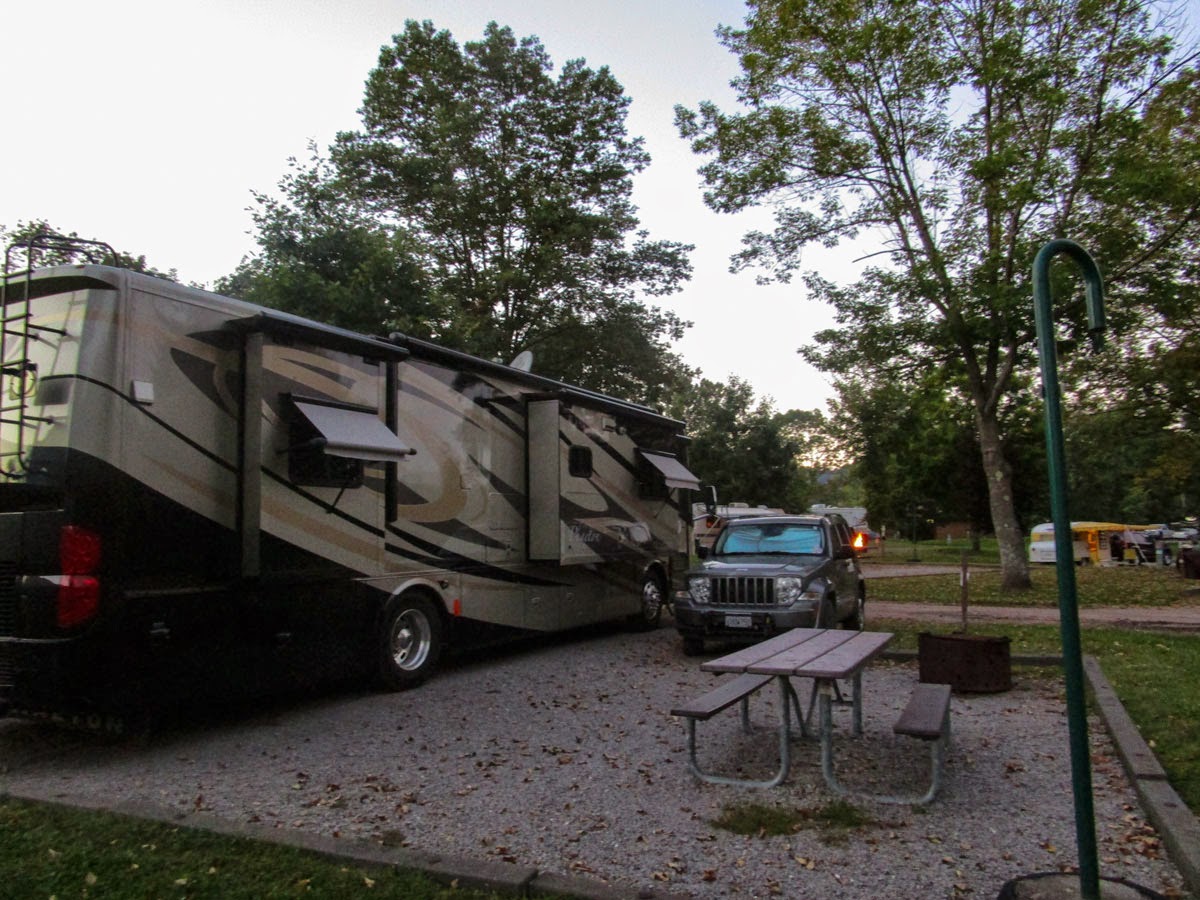 I spent the day knitting and playing with the puppies while listening to far off lonesome train whistles.  I'm sure Barbara did the same ... except for the puppy part!!  Miss Pansy has been clamoring for attention, so I'm sure she kept them busy!  About 10:45 a.m. I got a good scare however, as the sirens starting screaming ... you know, those kind that tell you to take cover for the flood, tornado or nuclear blast??  It went on for quite a while, so I finally got up and checked to see what the neighbors were doing.  Absolutely nothing, so maybe the dam didn't break after all!!  I found out later it was a call for the volunteer fire department.  Cell phones don't necessarily work in this area.  My Sprint MiFi works, but is rather slow ... my AT&T phone has no service but Verizon seems to work here.  Oh .. and satellite TV also works great if you're closer to the river.

As the sun set in the West ... which I thought was North ... the day came to a quiet end.  Today we head out once again on the Great Adventure towards Bardstown Kentucky. 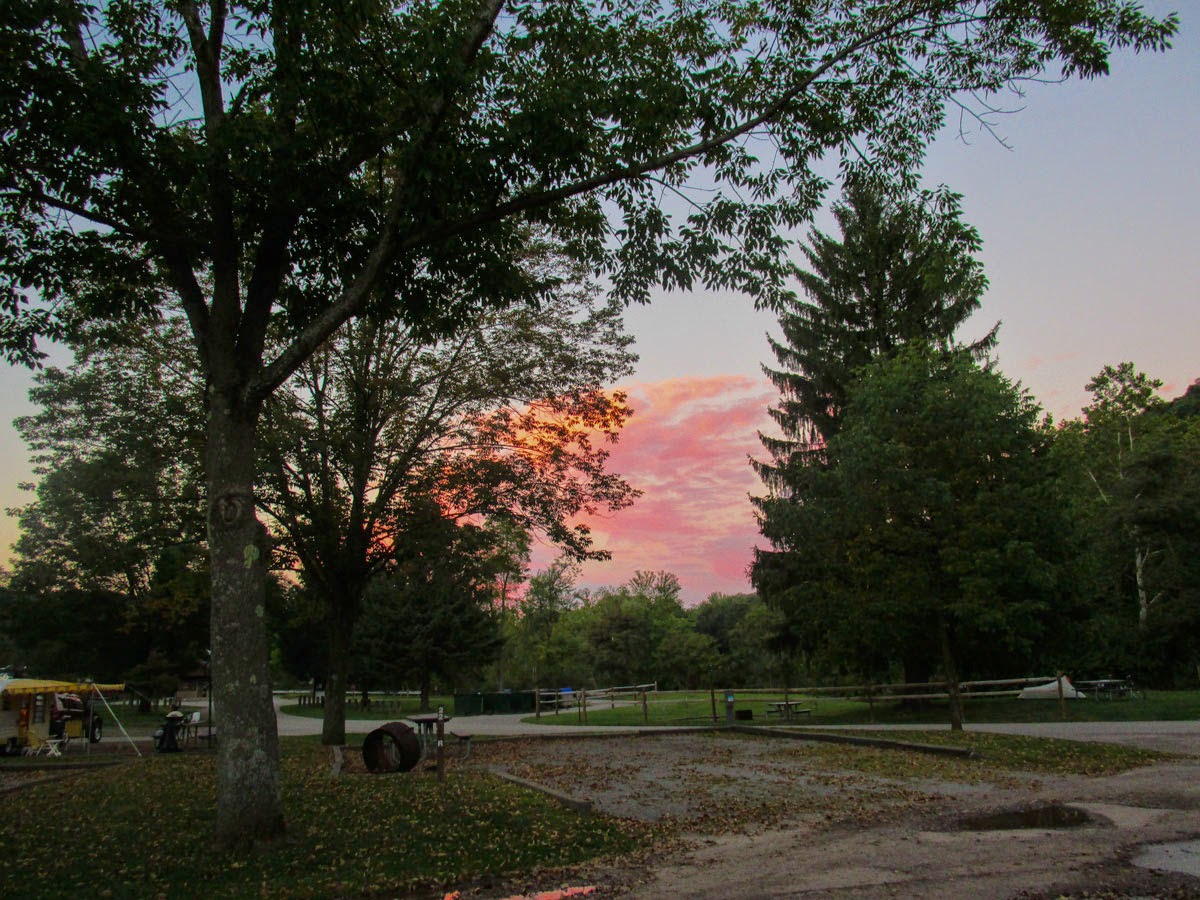 Posted by Nancy Kissack at 4:28 AM