Just When I Think I'm All Together!!! 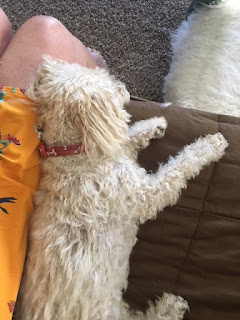 It's time for me to use up all those Fry's grocery store receipt points and fuel up the rig (with big discounts) for the trip home.  Funny ...  I wasn't nervous at all this time, even though I haven't driven it for a couple of months.

I unhooked everything, raised all the blinds, removed all the flashing lights I keep underneath to deter the packrats and even removed the tennis balls from the windshield wipers.  As I sat in the driver's seat, I was feeling pretty smug.  I actually remembered EVERYTHING, including the inverter since I've already packed lots of frozen items!!

Here I go ... driving off in my big RV ... feeling really fine!!  But boy is it HOT!  I didn't bother with the air conditioner and generator, I just flipped on the dash air.  Well I tried anyway ... the little knob just went round and round.  There was no clicking and no turning on.  In fact, the knob fell off in my hand.  Luckily I could turn the stem with my fingers.  It blew hot air.  Oh well, I don't have far to go.

That's when I looked down.  CHECK ENGINE!!!  Oh good grief.  I've started this thing up and run the engine every other week and NEVER had this happen.  I saw nothing in the gauges to think something was up, so I just kept driving.

As I went down a short hill for a left turn, I heard it.        Honk     Honk Honk   HOONNNNNKKKK! The lady pulling up beside me was pointing frantically.  Now what???  Am I on fire???  Are the tires flat???  I hit the brakes and stopped in the middle of the road.

I WOULD have hit the emergency flashers, but couldn't remember where they were at that second.  I jumped out, walked around the rig which was holding up oodles of traffic and found my big bay door wide open.  What the heck?

I slammed it a couple of times, thought it was latched and took off ... slowly.  Finally at the fuel station, I was feeling better about everything because I was getting fuel at a 50 cent per gallon discount.  Or not.  You have to have your little card to scan, which was still on the Jeep keyring back at the house.  No discount for YOU!!

As the pump filled the tank, I looked at the bay door.  It was calling my name.  I slipped a fingernail into the crack and pulled ever so slightly.  It popped wide open.  BIG SIGH!!  It's not latching at all.

Once I paid FULL PRICE for the fuel, I pulled over and scrounged through my tool box for a couple of wrenches to try and fix the problem.  There were no wrenches to be found.

With one set of regular pliers, one needle nose pliers and seven attempts, I was finally able to get it to latch.  I think.  At least the fingernail trick did not produce any results.

When I started up the engine to leave, the CHECK ENGINE light went out.  Whew!!  Thank goodness for small favors.  Maybe this January at the RV rally I will invest in one of those tell all computer things that sits on your dash and tells you what the check engine light is saying.

With my ego totally deflated, I quietly made my way back home.  I backed in the long driveway, replaced all the flashing rope lights and tennis balls just in time to be met by the air conditioning repairman.  You see when I came in the house Monday afternoon, I smelled something really bad right at the air filter intake.  It hit me right between the eyes.  Just what I needed when I'm planning to leave. 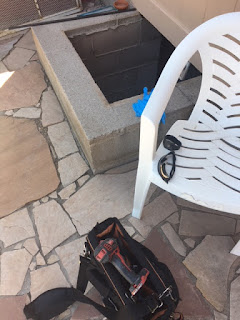 It's a long story ... it's frustrating, maddening, and I think I got taken yet again.  I'll report on that tomorrow because right now, I need to do some ZEN get-over-it breathing and lower my blood pressure!!

I'll be back on the road in the morning.