It was another long five hour drive from Quartzsite to Hesperia where I planned to spend the night.  I'm not into long drives, especially when Jonathan and I are already tired from the first five hour drive.  As much as I would love to tell you it was a nice relaxing time, I cannot lie.

It was a hot 89 degrees when I pulled out of the big Q, all of 200 yards to the fuel station.  Did you know that in Arizona, if you fuel up at the truck side of a station, you pay an extra truck tax?  Better to fuel up on the RV/Auto side, but alas, they were under construction.

Finally on the road, the traffic was awful.  I've never seen so many cars and trucks ... one right after another.  The good news is since a lot of it is downhill, I got 13 mph.  Crazy, right?  It's the big engine with the smaller, lighter body.

When I hit Indio, traffic got worse.  I just HATE driving through that section.  I'm always afraid I will miss an offramp, no matter how many times I've driven it.

At long last I'm nearing Hesperia.  I had never heard of it until friends Barbara and Tom Westerfield said they stopped at the Elks Lodge RV Park.  I don't think anyone even knows it's here!!  It's a little ways off the freeway, so I followed my GPS.  Too bad I didn't remember I set it for the center of the city since I didn't have an address.

All of a sudden there was that HONKING again!!  I'm sorry, I'm sorry ... I must have pulled out in front of you!!  Another half a block and MORE honking.  CLICK ... the brain kicked in.  I bet that darn door is open again.  Sure enough ... everyone was pointing.  I pulled over at the first spot I could find and hit my emergency flashers.  This time I remembered where they were.

As I hit the brake switch, I jumped out the door and ran around to the driver's side.  There I found a nice man in a van parked behind me with HIS flashers on so I wouldn't get run over.  I SLAMMED the door and raced back to the rig.

After a couple turns around the block, I finally found the Elks Park.  Whew!!!  At last I can relax.  But first ... fill up with DEF fluid and fix that darn door!!  THIS time I did what Mr. Chance suggested. 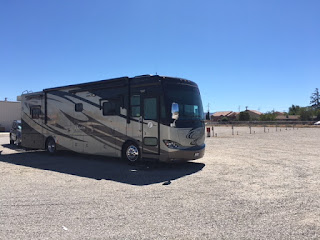 Cheap latch if you ask me, but anyway, I moved it out enough so the door is latched, but almost loose.  I grabbed it from underneath and gave it a hard tug.  It stayed latched.  Gosh I hope this is the last time that happens!!! 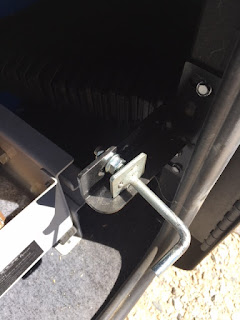 As you can see from the above picture, I'm completely alone here.   It's so quiet .... well except for that big dog in the back and the trains that go by.  No matter ... I have a 30 amp hookup and the AC is running just fine to combat the 95 degree weather.  The good news is that it was 65 degrees at 4 am.  I'm loving it!! 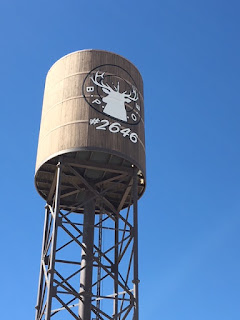 When I talked to Patty, she asked if they had a quilt shop here.  Funny you should ask.  Yes ... yes they do.  I unhooked the car and shot down Main Street.  Wow .. this is a really big town just chock full of restaurants that sound amazing.

I found the quilt shop just in the nick of time.  They are closing their doors for good at 5:00.  Everything was 50-70% off.  Who could resist a deal like that?  He/she with the most fabric WINS!!

It's going to be a cruising easy day today.  I've only have a few hours drive to Bakersfield where I'll stay for one more night before heading to beautiful downtown Hanford.  Maybe today I can catch up on some sleep.

I wonder if Bakersfield has a quilt shop?????