When I was a kid living on the ranch, the cattle business wasn't at its peak.  In order to make extra money, my dad worked at the Merced Game Refuge outside of town.  I've never been there.  After viewing some images a friend took at that sight, I decided it was time to take flight and see what it was all about.  At the entrance, I found a large map with many brochures describing the birds living in this habitat.   Although there are some hiking trails, the main access is an Auto Tour ... a dirt road that you follow for 5 miles through the marsh area.  At various intervals there are signs describing the environment and what it takes to keep it ship shape so the wildlife will spend the winter. 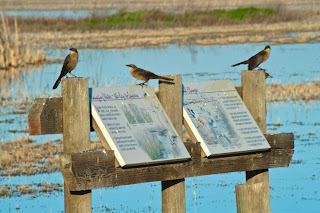 Blackbirds were in abundance ... red wings and yellow heads (very rare here).  Unfortunately I don't have a lens big enough to get close ... all the upper crust nests are too far out in the pond.  This red wing was close to the road, tweeting like crazy, trying to attract the females. 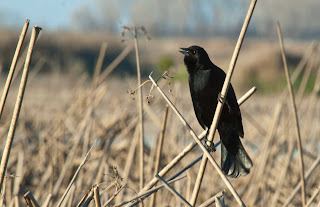 I know, I should be able to tell you what this is ... but I felt like taking a brochure would be one small expense they didn't need to incur.  Cute little guys, they are cruising the shallows looking for lunch. 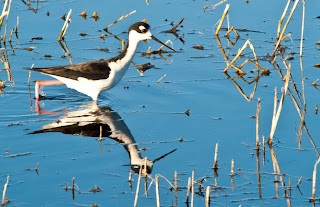 Lets go this way ... no lets go this way!!!  These guys were cruising back and forth in the same spot ... they just couldn't decide which was the best way to go!!  Most of the areas are flooded like this, with huge cattail rafts in the middle for nesting. 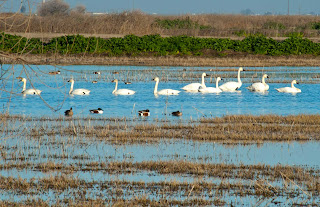 Other wildlife is prolific here too ... I caught a muskrat swimming around, but wasn't fast enough to get a clear picture.  Also hanging out, or hiding out, were the cutest jackrabbits.  Hunkered down so I couldn't see them, this one remained motionless until I walked away.  As you can see, they totally blend in to the background. 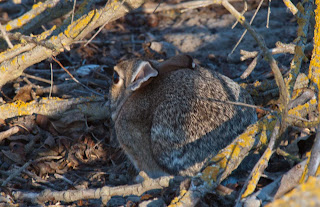 Of course this is what I was waiting for  ...  sunset.  There were thousands of birds in this section.  It was amazing how noisy they were.  Not only were they talking amongst each other, they were talking to the birds flying around that had not yet landed.  Telling them there were no vacancies I suspect.  I have to say that this is exactly how it looked.  There is no photoshop color enhancement here. 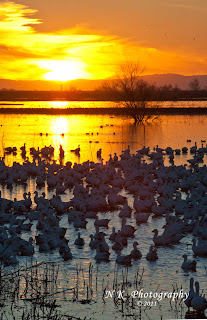 It is funny how, as the sun started to set, the birds took off in waves of squawking, headed to the fields behind me where the great blue herons were making an even louder ruckus.  Even though I couldn't see them, the sound of their conversations was unmistakable.  Sooo amazing to stand there among all these birds listening to them squawk and carry on. 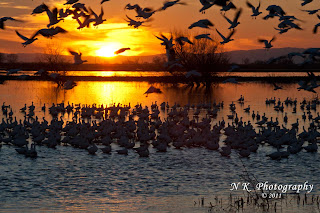 This won't be my only trip to this site.  I plan on returning to capture the great blue herons, and I highly recommend you venture out here around 5:00 pm to catch the spectacle!!
Posted by Nancy Kissack at 11:19 AM