No matter how many times I have been to Yosemite National Park, I can't keep from returning.  It just doesn't matter how often you have taken that particular shot, it's different every time.  This time of year, as the thermometer starts to drop, lots of photographers head out to find great fall color.  Sometimes the colors are incredible ... and sometimes not.  This was a NOT time.  It has been cold enough for some trees to turn, but with the windy days, all the leaves have already hit the ground.  The rest of the trees are still very green, and with the snow storm that just hit this morning, they won't be able to show their stuff this year. 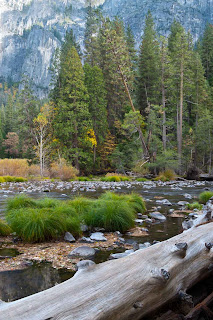 As the sun starts to drop in the sky, the photographers take up their spots on the bank.  We were too late ... so we moved on to Pohono Bridge. 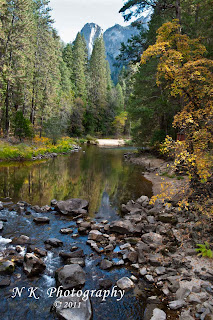 This shot is where Hwy 140 meets Hwy 120 which goes over Tioga Pass.  This spot had all of the fall color.  There were a few other small trees, all right along the road.  Seems the flood a few years ago wiped out all the color producing trees that were near the river in the valley. 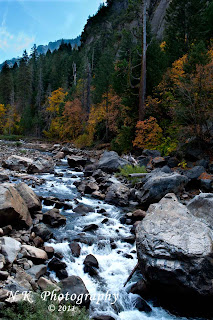 Pine needles were falling in the wind like rain (I'm still picking stuff out of my hair!!) resulting in lots of litter in the water.  I know ... it's trash ... but it's kind of pretty trash!!! 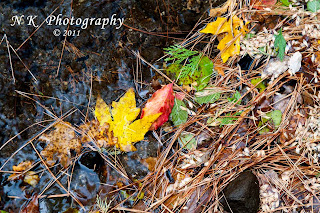 One shot of Half Dome ... you've seen this before.  I'm planning a winter snow trip so should have better images of Half Dome covered in snow. 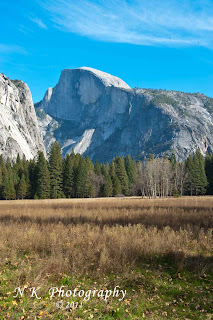 Lastly, in the Half Dome meadow, there were thousands of seed pods that had just broken open.  Millions of seeds along with lots of fluffy cotton to fly them to their new destination ... and cause us sneezing from hay fever! 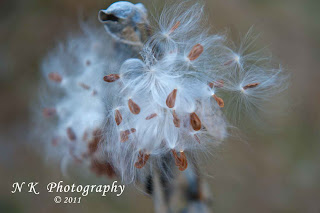 Nature can be soooo beautiful.  I'm glad I am able to capture such a tiny part of it.
Posted by Nancy Kissack at 8:50 AM