Life on the Ranch

Over the years, I have shown my friends images of life on the ranch when I was a kid.  They have constantly said I should scan these images so they won't be lost.  Since I don't have any children or grandchildren to leave them to, I wasn't very interested.  I have to say though, that I love reading stories of peoples life in the "old" days of the gold rush to the West, and so decided to put some of the images up here along with the "stories of old" (even though I don't view myself as old!!) which I will eventually have made into a book.  I do have one nephew and one grand nephew ... maybe some day he will get a laugh out of seeing his Great Aunt when she was a kid.  All the images are black and white ... my mom had a small Kodak camera.

First up ... I was born!!!  At Miss Friese's Maternity Home in Lake Isabella California, 50 miles east of Bakersfield in the high desert on a cattle ranch. 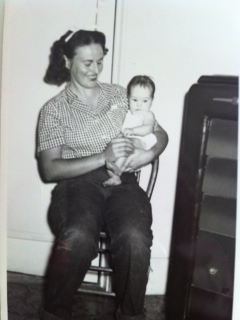 My first introduction to grass ... yummy!!!  The yard is fenced because the cattle had the run of the place and I guess it kept us corralled.  I did at one point, escape ... and tried to follow my dad to the field (always a tomboy, even as a baby) ... whereupon I got stuck trying to crawl through the gate. Apparently no one heard me cry, and after awhile, I fell asleep.  When it was finally noticed that I was missing, they found me, still stuck in the fence!!! 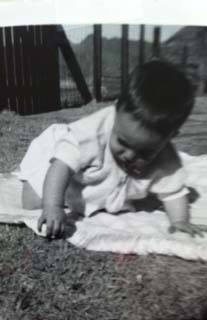 Local transportation to Kernville where my mother's mother Grace lived and worked. 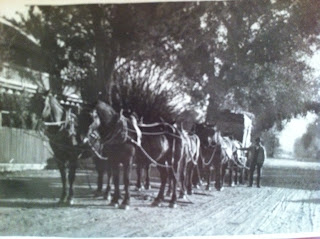 Ranch life wasn't exactly easy.  My grandfather came from the Isle of Man with his two sons and bought two ranches in Lake Isabella.  Here he is seeding the fields to grow hay to feed during the months grass was not available.  There were a lot of local Indians who were hired on as extra help, but every time they got paid, they would buy the fire water ... and not show up for days.  When their money ran out, they would return to the ranch. 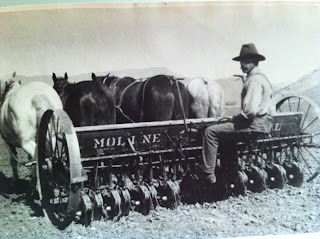 We also raised turkeys to sell to the local people ... my brother got in trouble big time when he got mad and threw a rock at one ... hit him in the head and literally knocked him dead!!  We had turkey dinner that night.  Here's my brother Dennis.  Every Easter we got to dress up and go to the Methodist Church.  As long as I can remember, I got a new dress for Easter ... my mother would buy the material and make matching outfits for us.  It's where my sewing knowledge comes from. 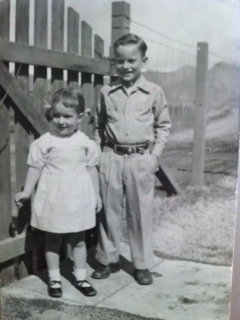 My mom's sister who lived in Bakersfield, had three children ... our cousins Patty, Mike and Tom ... who came to visit occasionally. This is Patty on the left.  Don't you just love the hair??? 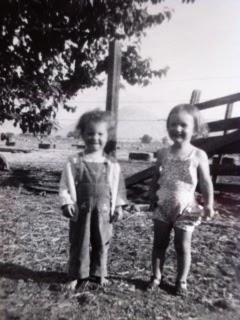 There were no trips to the grocery store like nowadays.  In fact, I don't ever remember going to the store when we lived in Lake Isabella.  I do know the nearest store was in Bodfish, as was my babysitter.  We had a milk cow that provided milk and cream, which I churned into butter.  My mom grew vegetables and we basically lived off the land.  I remember having a telephone ... two longs and a short ring meant it was for us.  You had to be careful what you said however, since it was a party line with three other families on it.  This is my mom and dad bringing home dinner!!!  Lots of pheasant to put in the freezer. 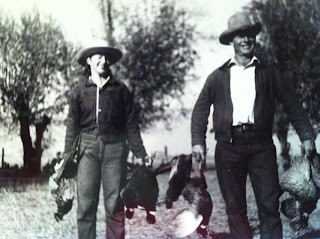 Lastly for today, here is where my love of Halloween comes from.  Like most kids, I loved dressing up in all kinds of fun outfits.  This outfit was actually just clothes I had, but my grandmother took an old mop and made the "kilt purse" that hangs around my neck.  I LOVED this and kept it for years until it literally disintegrated. 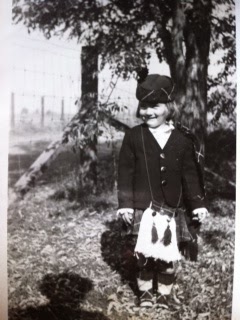 When I was four years old, the government decided to dam the Kern river, to provide water for Los Angeles I imagine.  Unfortunately, our ranch was at the bottom of the new lake.  They claimed imminent domain and we were forced to move.  Two suitable ranches were found, one in Merced with great corrals and a big scale for weighing cattle ... one in Carson Valley Nevada with a nice house.  My mom wanted the house, my dad the scales ... and so we moved to Merced in 1953-54.
Posted by Nancy Kissack at 9:15 AM