Be Adventuresome!! You Can Do It!!!

When it comes to cooking, I usually tell people I can't.  Sure enough if I say I can fix something, it becomes a disaster worthy of a burial in the back yard.  I am adventuresome enough however, to try anything once .. like the turkey tetrazzini that's still in my freezer.  I had quite a bit of leftover pork, and decided I would substitute meats.  Bad idea .... in fact I had to substitute a couple of things.  It was awful.  There are still two containers in my freezer that will be laid to rest in the cold dark earth after Christmas.

Around this time of year, I usually like to make some ooey gooey delicious treat to give away to friends and neighbors.  This year I bought Sees candy.  Feeling badly about that, when my friend at the Elks mentioned his daughter was selling Baklava, that Greek morsel of walnuts and dough, soaked in honey syrup ... I thought it might be a nice gift.  Problem was, I've never made baklava.  Everyone I talked to said it was WAY too hard.  Fifteen minutes on the internet and recipe in hand, I'm braving the kitchen hoping for a miracle.  I CAN DO THIS!!

Fillo Dough is intimidating ... no doubt about it, but be BRAVE!!  It's easy to work with.  You can purchase a box in the freezer section of your grocery store.  Take it out and leave it on the counter for two hours to thaw.  I then unrolled it and spread it on my trusty pillowcase pastry cloth. 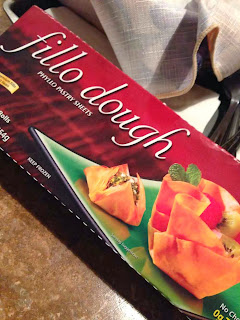 Here's the bad part ... one whole pound of butter, melted.  Lay one sheet in the bottom of the pan and brush with butter.  Nine more times and I had butter all over everything.   Now for the nuts ... one pounds of walnuts, ground up in my antique food processor.  I really do need to replace it.  I couldn't even remember which way to slide the bowl to get it going and it seemed bent ... how did THAT happen???  Four more layers with butter, nuts, more layers, nuts ... and so on.  I ended up with 10 layers on the top.  I should have taken more pictures, but my hands were covered in buttery goo!!

Now comes the hard part ... slicing it into those pretty triangle shapes before I bake it.  Even with my sharpest knife, it was hard not to mess up the top.  While that was baking for an hour, I made the sugar/honey syrup.  Actually, I made the sugar/honey syrup, candy, terrible mess ... because I left out the water part.  It was noted in the "bottom" of the recipe to add 1-1/2 cups water!!  This is what usually happens to me when I cook.  About the time I couldn't get it or the spoon out of the pot, I heated it almost to the flame point and dumped it in the outside garbage can as smoke and steam rose through the air.  Time to reread the recipe and start over.  At least I had enough ingredients to make a second batch. THIS is finally the finished product, a liquid syrup. 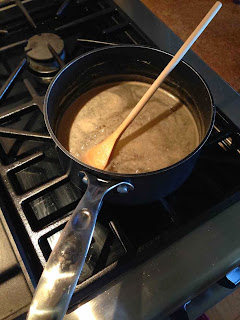 Once out of the oven and slightly cooled, I poured the also cooled syrup over the lovely brown dough in the pan.  For some reason I think I had too much liquid, but it looked pretty amazing.  I snuck a couple of small corner pieces for a taste test. 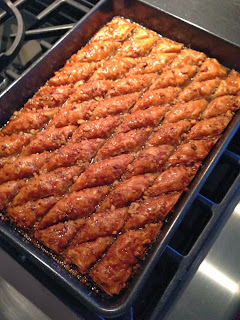 I think I died and went to heaven ... it still needs to soak a little longer, but it is AMAZING!!!! 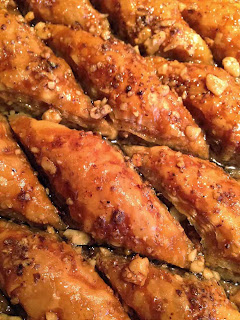 I seriously can't believe it came out so good.  I don't even LIKE honey!!!  My friends who came to dinner agreed ... the pumpkin pie was still in the fridge and the Baklava was almost gone. 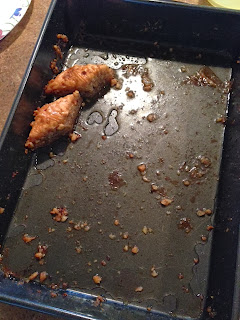 Gee ... what to do with the last two pieces!!!  They were gone in a flash!!  Truthfully, we didn't eat the entire pan.  I put half away in the freezer to wrap later as gifts.  This morning, I took ONE out and thawed it for a taste test ... some things just weren't meant to be frozen.  THIS however, worked perfectly.  It tasted like I had just made it!!!

So even if you are a not-so-great cook like me, you can make a delicious pastry treat for your family and friends.  Just be adventuresome ... YOU CAN DO IT!!!  If it's really bad, like my tetrazzini, freeze it for awhile, then when no one's looking, grab your shovel and have a nice ceremony!!!