Almost The End of The Story!!

It is our last day in paradise ... not exactly MY description, but under different circumstances I would definitely agree.   Our chariot awaits at the dock to take us back to civilization.  It's a shame really, because with preparation, this would be an exquisite place to visit.  Maybe I will return with a guide of my own for photography.   Of course that is being said by someone who is no longer exceedingly wet due to humidity and rain, whose mosquito bites have slightly disappeared and is warm and cozy in front of the fireplace!!  It took us all of five minutes to pack up our stinky wet clothes and head to the boat ... I mean chariot!! 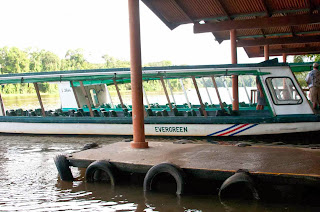 The mosquitos on THIS side of Costa Rica are small and don't make much noise, but they are VERY sneaky and mostly come out after a nice rain.  Poor Patty had a bad one, that even with medication, didn't want to clear up.  I had three nasty bites, even though we kept ourselves drenched in OFF!! 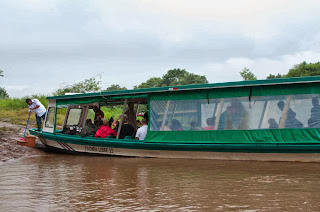 Thankfully it is not raining upon our arrival back on the muddy canal bank.  We waited 1-1/2 hours for the bus, having a nice rest in the sun while our clothes rotted in our luggage!! 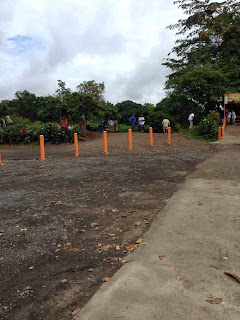 With this being the only access for supplies and tourists making the trip to Tortuguero, it was crowded  with tourists, tour buses and supply trucks.   The building you see has a patio area that was packed with people before we arrived, and when the sun peaked out around the clouds, MORE crowded in. 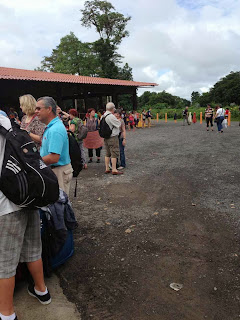 Finally our bus arrived!!!  There was no one holding a sign for this one.  Everyone just ran around asking every driver that came in, where they were going.  When the guide Carla said San Jose, we jumped on board. 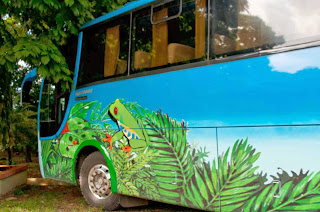 A stop for lunch at the same restaurant we ate at previously (behind a guarded gate) was a GREAT one for me.  We ate quickly ... and of course at the wrong table ... the stepchildren had to pick up and move, but at least this time we sat with other guests ... for all of five minutes.  I knew there were poison frogs around the tree out front, and I didn't want to miss any opportunity for pictures!! 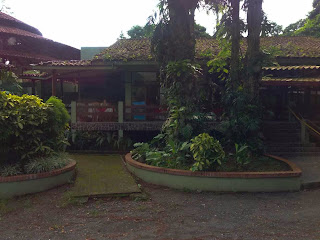 To my overwhelming surprise, I found the only critter I had not captured so far, hanging from a tall tree.  Really, this sloth is pretty ugly ... but beautiful to my camera.  Sloths are awake only 4 hours a day, sleeping for 20.  This beauty was not only awake, but hungry!!! 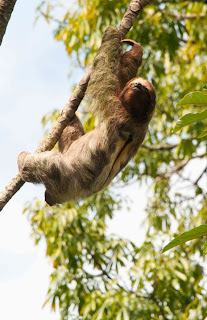 He moved from one branch to another as he made his way to the tastiest leaves.  They DO move very slow ... even when he hung by his feet to scratch his head ... he scratched in slow motion.  When he pulled himself back up, it was in slow motion. 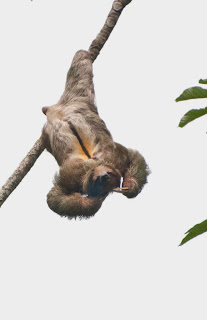 I won't bore you with all the images I took ... I watched him for over 30 minutes.  He finally made his way to the end of the tree amid the leaves and munched away. 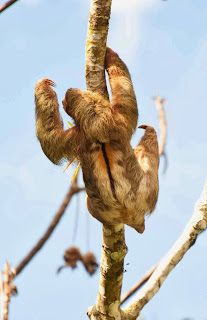 Then the stepchildren feeling began again.  After a 3-1/2 hour bus ride, we were dropped off at a different hotel than we expected.  We asked Carla about the van that was to pick us up as the other passengers raced to their hotel rooms.  Finally loaded into a small tour bus with seven other passengers, our luggage tags as well as Carla's clipboard, said we were going to the Doubletree Hotel.  Ahhh no ... NO ... that is NOT our hotel.  Our luggage is stashed at the Wyndham Hotel!!!  Of course the driver didn't speak English, but thank goodness one of the English speaking guides jumped in our van and explained where to go.    Can you see the traffic here??  San Jose at 4:00 pm is worse than San Francisco at 6:00 am.  It was almost two hours to our hotel ... and we were the very last two stepchildren to be dropped off. 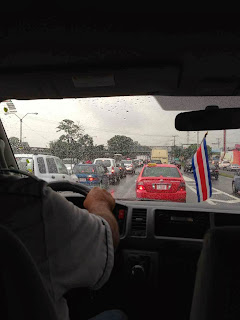 In driving the other passengers to THEIR hotels, we passed this Hemingway House and wondered if he actually spent time here.  Since he lived in Cuba for awhile, it was possible.  I would have asked the driver, but no hablo english.  Funny thing about San Jose ... people don't let you into traffic.  We were literally driving on the shoulder because no one would let us move over.  I'm shocked that the people were so nice until they got in their vehicles.  It was taking so long, I asked if this "flight" served dinner, but after a little interpretation by the guide, the driver just laughed loudly!!! 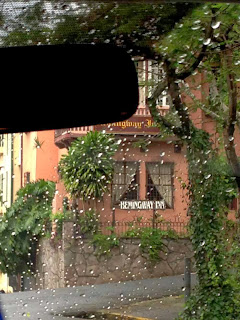 I can't tell you how happy we were to have finally arrived back at our hotel in San Jose.  The room that was so-so in the beginning, was the BEST EVER upon our return.  It had air conditioning, clean water, HOT water from all faucets, washcloths, lots of towels and a toilet that flushed!!!  Besides that, they had a gift shop that we planned on exiting through!!!  But first ... I discovered that my purse/overnight bag had gotten wet on the bottom ... so now ALL of the stuff in my bag is a nasty stinky mess.  Where are those garbage bags?????  We "borrowed" two more!!

Early to bed, early to rise.  We meet our driver at 5:30 am to head to the airport.  I called Collette Vacations to verify that we really WOULD have a ride ... and they told me "of course!!  They are scheduled at 5:00 pm".   PM??????   Uh WRONG!!!  A.M. my dear Collette friend ... A.M.   Ten minutes on hold while they called the transport people and it was finally confirmed.  Now you KNOW I didn't find any comfort in THAT, so I double checked the hotel shuttle to the airport at 6:00 am.  ALWAYS be prepared is my new motto!!!

And we STILL have to brave the airports for the flight home!!!