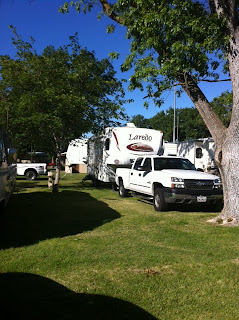 So here I am in the big city of Los Banos.  It has actually changed quite a bit since I was here last.  The entire railroad from one end to the other has been removed and replaced with a Rail Trail asphalt path with workout stations.  Very nice!!  First night was a two hour social hour with all the margueritas you could drink ... I had pepsi!!  Turns out they are a very nice group of people.  I spent the entire time making new friends, especially with the dog and cat people.  Yup, there is a gentleman here with two cats that he lets out every morning ... (he says they never roam far) ... they come back every evening for dinner, no matter where he travels.  Jessie met up with one the first day.  I'm not sure who would have won that fight!!!  I had to drag her off barking and screaming (literally ... she went nutso!)!!! 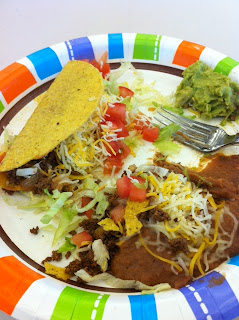 Dinner was provided by the club and it was delicious.  This morning they had fresh hot pancakes for everyone, but I was still so full from last night that I had to pass.  I did hook up with a lady who takes long (fast) walks every morning and night ... my kind of girl ... so I hope that negates the eating!!  At least until tonight when we hit the Wool Growers Restaurant.

Lunch was a mass exodus to a small BBQ joint called Hot City BBQ.   Now THIS is the place to go in Los Banos.  He cooks all the meat about 17 hours in front of the small building and is only open Friday thru Sunday.  THE best BBQ pulled pork I have ever eaten in my life ... bar none. 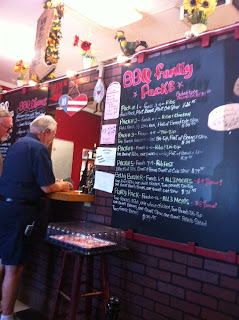 This sandwich was at least 4 inches tall and on the best home baked bread .. YUM YUM!  The cole slaw was not too goopy and not too sweet ... served with Carolina BBQ sauce, Habanero BBQ sauce and something else I decided not to even try since breathing fire is not pleasant.  AND he caters.  Expect a BBQ at my house soon, and I see many trips to Los Banos in my future, even with the gas prices. 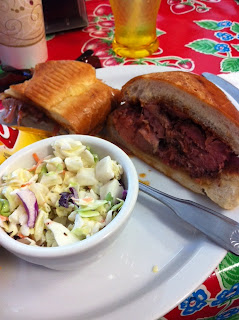 Three of us women walked back and discovered several really neat furniture/antique/chachky stores that you would expect to see in Berkeley!  A truly surprising side of Los Banos.
Posted by Nancy Kissack at 2:26 PM