DE-TER-MINED ... Having Made A Firm Decision

Let's be real here ... it's probably more like being stubborn as a mule.  I paid big bucks for this darn watch and I wasn't ABOUT to give up without a fight.  After a lot more research, I found there was one more update.  Seems it doesn't update the LATEST, but the NEXT one.  There was one to go, so I went back to the Elks Lodge with the resolve of a twenty mule team.  This time I took a little reading material

I plugged in at 11:00 and ordered lunch.  Wish I had pictures of the beautiful patty melt and onion rings I ordered, but when I tried, it put the download on pause.  It took me ten minutes to get it back up and going.

It was surprisingly busy this day as they turned on the TV to hear our Governor's latest edict.  You should have heard the laughter!!  He really thinks he's going to put most, if not all of California, on a 21 day lockdown, meaning no one can travel to be with their families on Christmas.  What a joke he is.  Of course HE will be traveling to HIS family's place in Napa, you can guarantee it.  Anyway, we all had a good laugh and shut him down after five minutes.

My phone said 18 hours for download.  Oh good grief, or similar words that would get my mouth washed out with soap.  I started on my sandwich.  Every time I checked the progress, it would jump forward and lose a couple of hours.

By the time it was halfway, only an hour had passed.  Whoa ... this is going much faster than before. 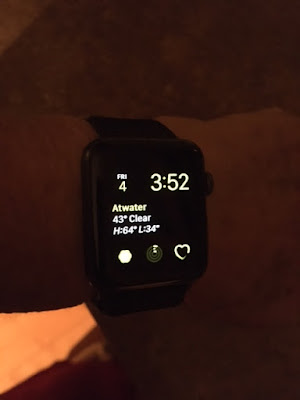 I tried to think good thoughts.  Finally the download was done ... now for the "preparing", then the "verifying" and lastly the download to the watch.  Then it crashed.  NOOOOOOOOOOO!!!  I waited and waited, but it was apparently locked up.

I literally spent the rest of the day and into the night re-programming everything.  Sadly, they have taken away some of the choices I had.  It will take me days to get everything straight, but WE HAVE A WATCH!!!

Persistence and determination prevailed ... really it's just being stubborn!!

With that accomplished, I'm now back to preparing the rig for a trip south.  As you can see, the temperatures here have warmed up enough to allow for outdoor work.  Oh Boy!!!

I was finally able to open the lock on the RV door late one afternoon.  Apparently the really cold temperatures freeze the lock so it won't UN-lock.  That's not good!!!  I did have Lazy Days fix it, but you know how that goes.  It worked until the weather got cold again.  So now I'm on the hunt for a small heater to keep by the door when it's freezing.

In the meantime, I'm repairing six drip sprinklers the gardeners chopped in half.  Not really, there's that stubbornness again ... I'm making a list .. and checking it twice ..  for the gardener to fix