I didn't really want to tell anyone that my skunk skills were still not up to par.  About five days ago I smelled one early in the morning.  I was hoping it just might be the last of the three I spotted originally, but with the size of that freeway under my fence, I'm probably looking at Big Mama again.

Before I set up my next big plan (not that it's going to help one little bit), I set about trying to fix that light fixture.  It's outside and very high in the sky.  My tallest ladder barely got me there. 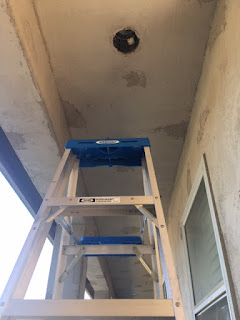 I couldn't squeeze the little metal gizzies tight enough to get the cover OVER the socket.  How could it possibly have fallen off?  After a couple of whoopsies when I had to grab the ladder, I gave up.  There's no use cracking my head on the concrete.  I don't put a light bulb in this one anyway. 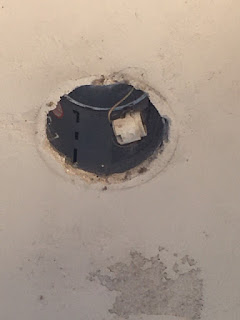 On to my next project as I contemplated how to murder a skunk without feeling bad for the guy who's just trying to get by in life.  It's been below freezing every night, so I waited until it warmed up to 50 degrees before dragging the ladder over to the RV.

Remember that door I never could unlock?  I now have to leave it UNLOCKED.  Even though I had the RV shop fix it, apparently it doesn't like the cold weather any more than I.  The key fob works great when it's warm but will not work at all when cold.  I probably could turn up the heat, but again, I'm cheap.

So up on the rooftop I climbed making a lot of noise, probably like Santa's eight reindeer and began the scrubbing process while dragging a 20 pound water hose.  Those of you who have done this, you know my pain.  There's no place to "hang" the hose while you scrub, so I danced with the scrub brush and twirled the hose around like a pole dancer.  You've seen those ones that fall off the pole, right?

Yes she looks purdy, but if you get up close, not so much.  I did discover another slide topper with numerous holes, as in it wasn't even keeping the leaves out.  Hopefully I don't run in to bad weather until I get to Tucson to have it replaced. 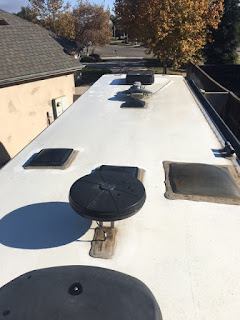 Here's a pretty good view of old Skunk Town (Skunkville being their new digs).  It's a nice long runway they love to saunter down like a super model, thumbing their nose at me the entire way.  On the left you can see part of the restaurant (acreage) they love to feast in.   If nothing else, I'm determined!! 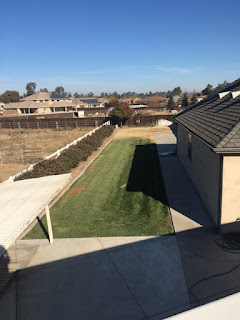 And so I gathered up the game camera for a look see.  There was a little problem with all the ice that accumulated on it.  I think the batteries must produce heat because by 4:00 in the morning it was covered in ice.  There were four videos, only two of which could be seen before the viewfinder iced over.

Of course the trap was empty.  No one wandered this direction except for this guy.  Yup ... kitty kitty is back like this is HIS yard.

Today I'm stiff and sore from all that hose dancing I did on the rig.  I moved the trap further out by the freeway entrance and set up the camera on the corral.  We shall see if I have had any visitors.

In the meantime, I'm having lunch at the Elks Lodge today after my dentist appointment.  I may just have to drink lunch ... but at least I can plug in my watch and see if an upgrade is possible.  I might even raise a glass to the skunks who have me skunked.

Posted by Nancy Kissack at 4:33 AM