What? No Guard Rails?

After a completely exhausting day on the road, I was lucky enough to see the very tiny sign that said RV park 2.7 miles outside of Canon City Colorado.  I pulled in and took a big breath.  MADE IT!!  After unhooking, I was backed in to this beautiful Premium site.  Things are rated here ... Deluxe or Premium.  It's a five star park in my book, but the extra three feet of concrete patio on a premium site cost a LOT more.  I'm paying $300 for 5 days in case you wanted to know.  Being centrally located is a plus. 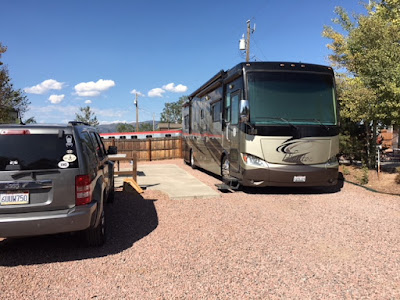 First thing yesterday, I sat and waited two hours for them to move me to my deluxe site.  At long last I was settled in ... until that 50 yard move resulted in NO TV.  Big sigh.  What now?  After an hour on the phone with Dish, we got about 1/3 of my channels working.  I can deal with that ... it's better than nothing! 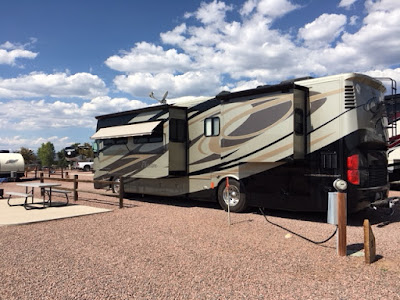 THAT however was the cause of the trip I made to town.  After all this, I could use a nice alcoholic beverage.  Like maybe a margarita.  Yes, that's it!!  So sad, too bad, Safeway does not carry alcoholic beverages, except beer.  Even a little bottle of wine would have been nice, but I couldn't find any.  Pepsi will have to do.

On the way back, I decided to take the short drive up Skyline Drive just outside of Canon City.  It says it's one way ... no problem, how bad can it be? 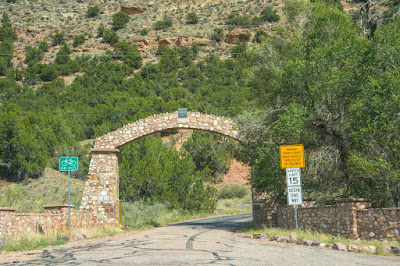 Well ....... at least there are a few pullouts on the side going to the very top.  This is an upturned Dakota sandstone hogback where you can see all the layers making up the ridge.  Pretty cool to see so many colors of rock.  Above this section is the Morrison Formation where you can see dinosaur tracks.  This picture is the easy part. 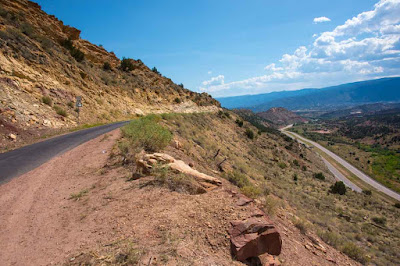 This road was built in 1905 by prison labor from the big prison right in the middle of town (still in use today).  They got ten days off their sentence for every 30 days they worked on the project.  It's not as spectacular as it was in the early 1900's, as the buildings no longer remain, just the 15 foot wide trail. 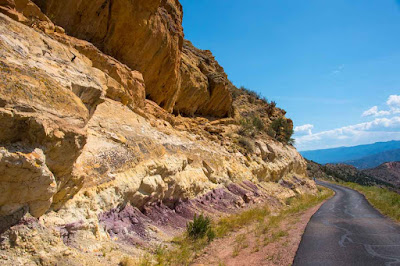 Those sun-highlighted pillows of rock sticking out are dinosaur tracks from eons ago, the outside layer having eroded away to make these visible.  The layers of rock are amazing.  I should have been a geologist. 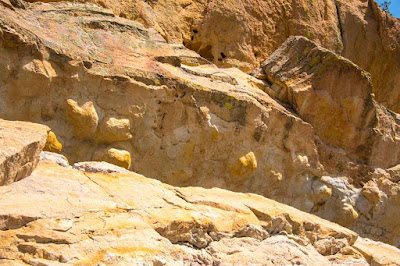 I do have to say one thing about Colorado.  There are no guard rails.  As many of you know, in California you can't go anywhere that there are not steel guard rails keeping you locked in tight.  Sometimes I think that's a challenge for people to crawl through and then fall off the cliff.  Here in Colorado ..... no guard rails. 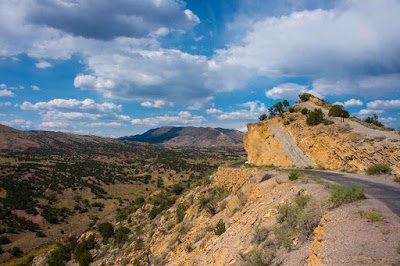 Pretty fabulous day at 80 degrees with a slight breeze.  In the interest of keeping this short, the rest of this adventure will come tomorrow.  I'm not really afraid of heights, but this one got my heart racing.  You're not going to believe the road, and honestly, it looks MUCH better in pictures than it really was in person.

In the meantime, the rally group will be arriving today, so I'm resting up.  On the schedule, the Royal Gorge Bridge, the train, a prison tour (won't that be fun) and Hiking with Cocoa.

Posted by Nancy Kissack at 4:23 AM