Elva ... you're going to love this!!!  Here it is, my guilty little pleasure, CHEETOS.  I haven't had any of these in over a year, but since the world is ending, I might as well indulge myself.  I don't go crazy, I actually make the little bag last through four sessions of orange-fingered yumminess.  I opened them from the bottom, hoping for some good luck in our return to normalcy. 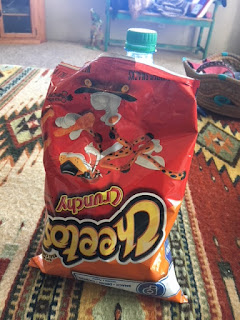 Here's another thing I don't eat ..... bread.  Why in the world I thought I should make some, only because there was none to be had at the store, is beyond me.  At long last, after almost thirteen days, this loaf is gone, along with all normalcy in my stomach.  It doesn't like bread NEAR as much as cheetos. 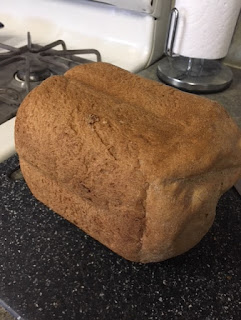 In an extreme effort to not WASTE any said food items, I took a ten day old box of raspberries and made sauce out of them.  I was inspired by Patsyischillin who has done this a couple of times.  It was pretty tasty, but I sure got tired of picking those seeds out of my teeth.  I can scratch raspberries off my list forever.

Here's another thing ... I eat VERY little ice cream, so why in the heck did I buy that whole gallon of Blue Bell?  It was the only container of vanilla I could find.  I'll never finish THAT off!! 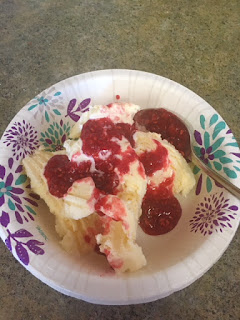 All this food I'm not used to has systematically added almost all those pounds back on.  How depressing.  It's bad enough I have no one to talk to, but add to that those uncomfortable I-feel-fat pounds and it's a recipe for disaster in my book.

So for the rest of the week, I'm determined to quit eating all the bad stuff and get back to feeling deprived.  It's much healthier for me.

My cactus looks like it's going to bloom any minute, but alas, nothing is happening.  Maybe it's too warm?  Up to 80 yesterday.  I even drug out an old pair of levis and cut the legs off in order to have a pair of shorts without going to the store.  Today they are so tight I'm miserable.  I know there is a solution to that ... stop the hand to mouth exercise I've been doing.  It would also help if I quit opening the fridge door like there was someone in there to talk to. 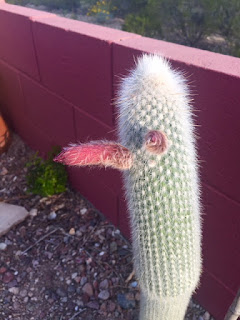 My current pastime is laundry.  How exciting, right?  A little more fun is playing great white hunter and getting rid of all the moths that flock into the house every time I open the back door.  It's perfectly okay though, it's that time of year ... spring is here!!

Today I'm taking my camera out on safari across the asphalt highway and into the unknown.  At least there won't be any food out there and maybe I can leave a pound or two.