As I've said in the past, I'm no electrician.  Nor am I a computer whiz ... so when something goes wrong, or appears to go wrong, I'm dead in the water!!  I can only go by what everyone else says and hope for a good outcome.  I try to throw in a little common sense along the way, but sometimes that just isn't enough!!

My computer internet connection has been giving me fits.   I took my MAC to the Apple Mechanic and like any appointment, everything was just fine and it wouldn't do what I said it was doing.  As soon as I connected to their WiFi, I had a screaming fast connection and EVERYTHING worked perfectly.

Next up, I called Clearwire, my service provider, who assured me their end was in good shape.  If I just put the modem in the right window of my house, it would work perfectly too.  I'm not sure how two out of five bars on their device means it's working perfectly, so I'm thinking that's a good part of the problem.

The only thing left to check is the wireless router.  The term wireless could be part of the problem ... meaning the only North window in my house is far, far away from my computer sitting on the desk in the other room.  Everyone ELSE agreed that was the problem, so I spent hours trying to access the internet and find a replacement for my Cisco.  This beauty has THREE antennas and can connect up to ten people in my house!!  Woohoo! 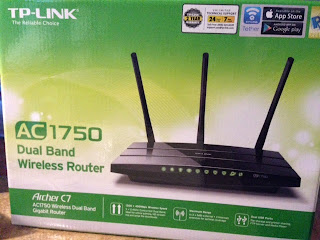 I didn't have a clue what to get ... it's like buying a car.  You look at all the models, but it's the engine that counts, and I have no idea how big an engine to look for.  In absolute frustration, I finally searched for wireless router reviews and up popped a list.  It was easy ... I just picked the top one and ordered it!!

It came with an 18" x 22" sheet of instructions, printed on BOTH sides, all in English, so I knew I had my work cut out for me!!  If I can't get this thing up and running, I will REALLY be dead in the water.  Amazingly, in about 10 minutes I had a connection.  YAY!!! 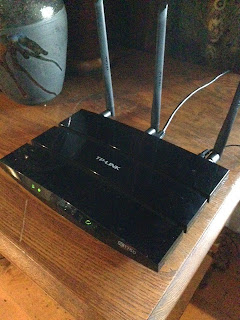 Truth is I don't know if I have a Volkswagon or a Maserati, but as long as it works, I'll be happy.  So far it's working better than the old one.  By the end of the year, Sprint will have taken over Clearwire and I'll have another whole set of problems.  Driving to Starbucks five miles away every morning to write the blog might be my only option.  How did I get so addicted to the internet??

In the meantime, my readers are correct ... my neighbors certainly don't care about anyone but themselves, as evidenced by the garbage piling up along my fence and the beer-drug parties, not to mention the fifteen goats in the back yard!  Being a farm girl, the goats bother me the least!!  This really is an upscale neighborhood, but since the property value crash, the actual people who were able to buy here, aren't nearly as upscale as the area!!

I think my neighbors didn't pay their garbage bill, so their service was discontinued.  Instead of hauling it off once a week as the County requires, they just stack it along the fence.  Since the 17 year old daughter hit high school, the beer parties have been every other Friday night.  I probably should have called in the authorities on both counts, but am a little leery since I'm not always here to keep an eye on my house.  I'll see how it goes in the next couple weeks!!