There's just some things that need to be left to the men, no matter what.  I've said it before and I'll say it again ... ladies ... let your guys go tinker in the garage and on your rig.  It's what they do .. and they are much better at it than we are!!  And don't worry about those three trips to the store ... it's not to see the cute gal at the counter (well maybe a little) ... but mostly it's to buy more parts!!!

The first thing on my list at Home Depot was a set of drill bits.  I have maybe three, all of which are the wrong size.  I thought the hole needed to be drilled a little larger to accommodate a bigger screw that wouldn't shear off.  Time will tell if I'm just dreaming on that point!! 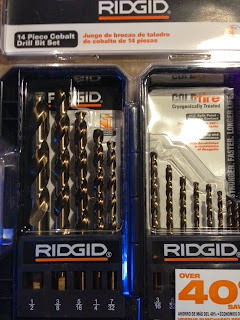 The second thing was the actual screws.  Do you have any idea how many kinds of screws there are??
Worse yet, do you know how many different sizes there are of each kind??  For some unknown reason, they aren't sold by 1/8 inch or 3/16 inch sizes, they have numbers like #6 and #8.  What does that mean in English please??  After talking to one of the "in-the-know" guys, I ended up with a box of 150!!  Really?  I only need ONE!! 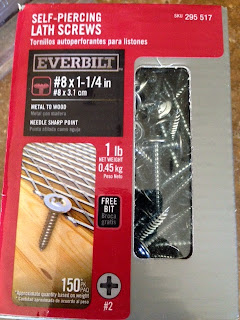 While there I tried to find a few 1-3/4 inch screws to finish with the drawer handles in the rig.  The nice gentleman recommended these.  Once you figure out how long they need to be, you just break off a section at a time until it's just right.  Sounds simple enough ... but when I screwed this into the drawer handle in the rig, I went a little too far trying to make sure it was tight, and twisted it off in the middle.  RATS!!!  The next two I tightened just enough and finally, that job is complete.  YAY!! 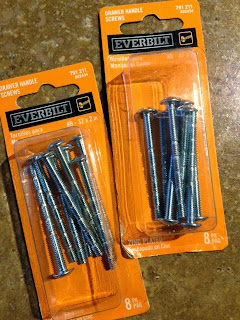 Next I got out my Mikita drill.  This baby has come in SOOO handy so many times, I don't think I could live without it.  Let the men have their toys!  A drill or two should be worth many trips to the yarn store ... or the fabric store ... or even dinner and a chick flick!! 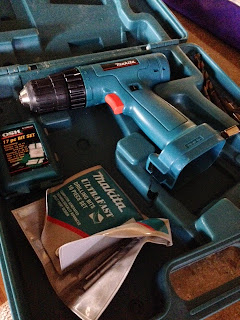 Of course drills need power, so I sat around for an hour while the battery charged!! 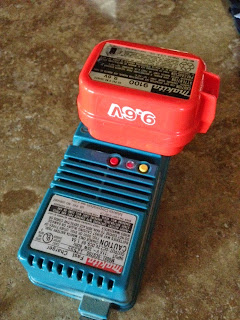 Finally I headed out with my set of drill bits to enlarge the hole.  The first bit was too small.  The second bit was too big.  The third bit was JUST RIGHT ... I thought.  Unfortunately, the one of 150 screws wouldn't go in the hole.  The fourth bit was just right too ... but just a tiny bit TOO BIG for the screws I had!!  OMG!!!! 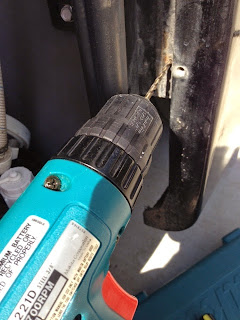 The nice man at the store said I should put Loctite on the screw so it wouldn't vibrate out ... which I did, getting this lovely blue stuff all over everything!   It's okay, I didn't need that kitchen towel anyway!!  Since the screw was now too small, I wiped it off and stuck it back in the box to be returned!!  Back to the store I go, even though I have no clue what size to buy now!! 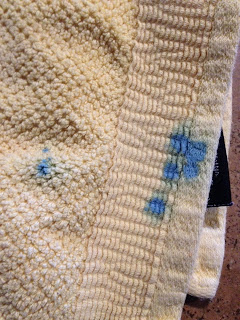 Since there was no man in sight at the store, I did the next best thing ... I called Tom Westerfield (shop teacher extraordinaire) for advice on the EXACT screw I needed.  He said to get the self-drilling screws and not listen to the salesmen.  Thankfully there weren't many of the self-drilling kind, and I finally settled on a #10 1-1/2" Pan Head Phillips - TWO to a package.  I don't know about you, but that means NOTHING to me!!  I just hope it works!!  I bought three packages so I'd have extras just in case, which cost almost as much as the box of 150.

By now I had no confidence whatsoever that this was going to have a happy ending.  I grabbed a screwdriver ... forget the loctite ... and proceeded to screw away!!!  Amazingly, it worked perfectly!!!  Out with the old screw, in with the new!!  The panel is now nice and tight to the frame.  I can't believe I did it!!! 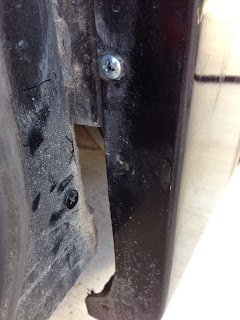 I don't recommend this as a female do-it-yourself project.  I'm pretty sure it was $30 in fuel going back and forth to the store, not to mention the frustration!!  Definitely keep your man happy with lots of trips to Harbor Freight so he can make these kinds of repairs ... it's worth it ladies!!!

About the time I learn how to do all this stuff, I'll pass on to the RV park in the sky.   The good news is that whoever buys my rig will have a few extra screws and drill bits in the toolbox to tinker with!!

Posted by Nancy Kissack at 6:57 AM