You just never know when you will be asked for help and whether you want to or not, it's just something you HAVE to do.  Three days ago, my dogs went crazy barking.  These two are the best watch pups ever ... they see absolutely everything and everyone that comes around the corner by my house including visiting canines. 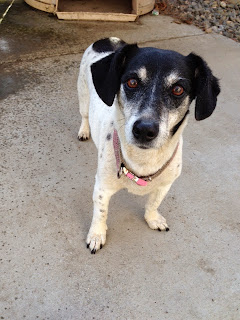 Saturday, the visitors happened to be a large Australian Shepherd, with a smaller white dog in tow.  From my position by the window, I couldn't see any tags, not that they gave me a chance.  They were off down the street before I could get the door open.  Unfortunately, I live near a busy country road, and I worried about them all night.

On Sunday morning at 5:00 am, they were again running around the neighborhood.  This time, before I rushed off to the Elks Breakfast encounter, I hit the door running with a hand full of treats.  I just hate to see doggies running loose ... it usually comes to a bad end.  They were having none of it, and took off across the field ... the little white one still following as fast as she could on stubby legs.

Monday morning, I didn't see them, but I was preoccupied with a Safelite appointment to fix a big zap on my RV windshield.  While watching the technician, I noticed THREE hits on my truck!!  I reported it to the Safelite office to see if they would fix it NOW.   Amazingly ... someone at Safelite has read the Book Of Service ... they said yes.  The service guy did a great job in record time, all of which will result in NO cost to me.

With that done, I turned around to see the little white dog at my feet.  Hi there!!  What's your name?? She jumped up like she knew me, as I looked for tags, but there were none to be found.  What I did find was a WAY too tight flea collar that I immediately took off.  YOU need to come with me little girl!  She walked stoically to the dog kennel in my back yard ... JAIL!!!  Here I try to be friendly to this lady and she sticks me in JAIL!!

We have something here called Paw Patrol on Facebook.  Anyone losing or finding dogs, posts pictures, hopefully resulting in lots of Happy Endings.  I took her mug shot and posted it immediately.  Nothing!!  In the meantime, she was relaxing in her cell with dog food, clean cold water and a bone to chew on.  Three hours later with no Facebook hits, I took her to my Vet to check for a chip ... not really expecting to find anything ... and lo and behold ... DING DING!!

A CHIP!!!!!  The Vet called AVID where the chip originated, but they wouldn't give out any information.  In five minutes they called back with bad news ... all the phone numbers had been disconnected and her name is Daisy!!  After pleading her case like a lawyer, they told me the owner used to live in Waterford (45 miles away) and used a Vet in Modesto.  At least they gave me the Vet's phone number, who I called immediately.  They couldn't give me any information either, so again I pleaded with them to either contact Daisy's family or call me back.

Daisy isn't happy about Jail, even with a chew bone and some of Coop's toys, as evidenced by her now constant howling!!  Finally, after another hour, Daisy's Mom called!!!  YAY!!!  She was out on bail by 6:30 pm.  It seems she's a real escape artist, getting out the back gate from about four blocks over.  Her mom SWEARS the husband will fix the gate so she can't go wandering any more!!

My good deed for the day ... Daisy's jail term only lasted about seven hours.  By the way, they also own the Australian Shepherd who had returned home on his own.

Please folks ... if you have pets that are chipped, be sure you have current phone numbers on file so your babies can find their way home.  I suppose Jail is better than dead on the road, but neither is good in my book, especially when you have to explain to the kids what happened to their pet.
Posted by Nancy Kissack at 6:52 AM