Up bright and early yesterday, Jessie, Cooper and I ran directly into the coyote stalking the RV park for breakfast.  Jessie went after him with a growl big enough to scare both the coyote and Cooper!!  Off he ran ... hopefully to return this morning for some portraits!!  In the meantime, I caught this beauty sitting on the fence.  There are probably a hundred of these redheaded finches flying around in the trees. 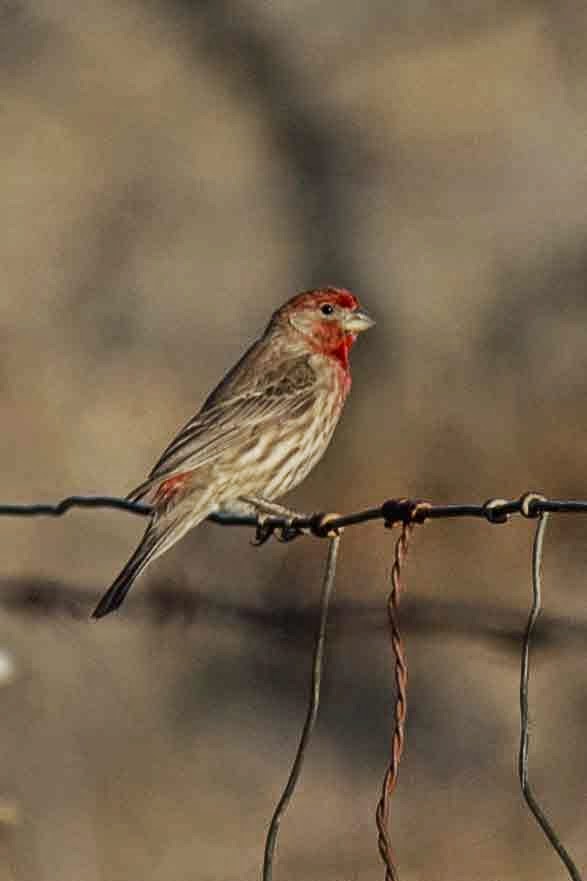 By 9:00, we were all seated at the Apple Shed on Tehachapi Blvd, just East of the Railroad Depot. Be sure and stop here for breakfast!!  Sounds rather silly, but I had the best fried egg over easy with amazing potatoes and thick homemade wheat bread for $5.00.  There were lots of omelets and scrambles going on too. 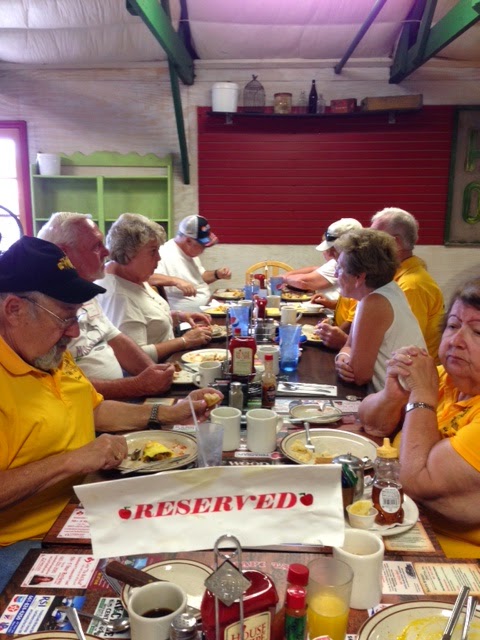 Leonard sitting next to me, ordered the ham steak.  It looked like half a pig!!  This thing was 3/4 inch thick, juicy and flavorful beyond belief!!  He took home two thirds of it, even though both his wife and I had a few bites!! 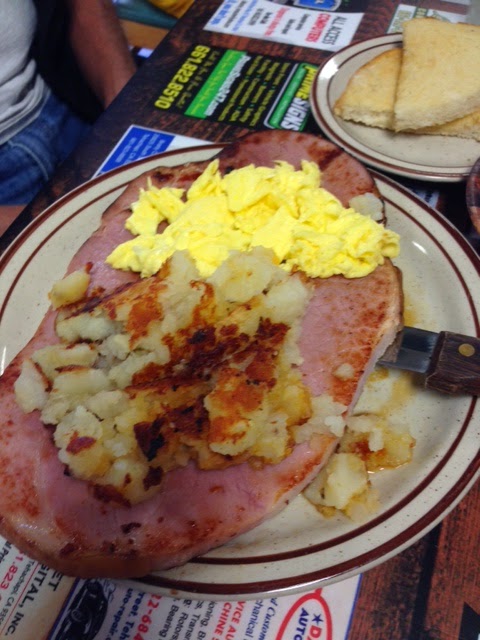 With breakfast out of the way, we went a couple blocks West to the Train Shop where you can purchase anything you need to create your indoor train layout.  If I just had a little more time at home! 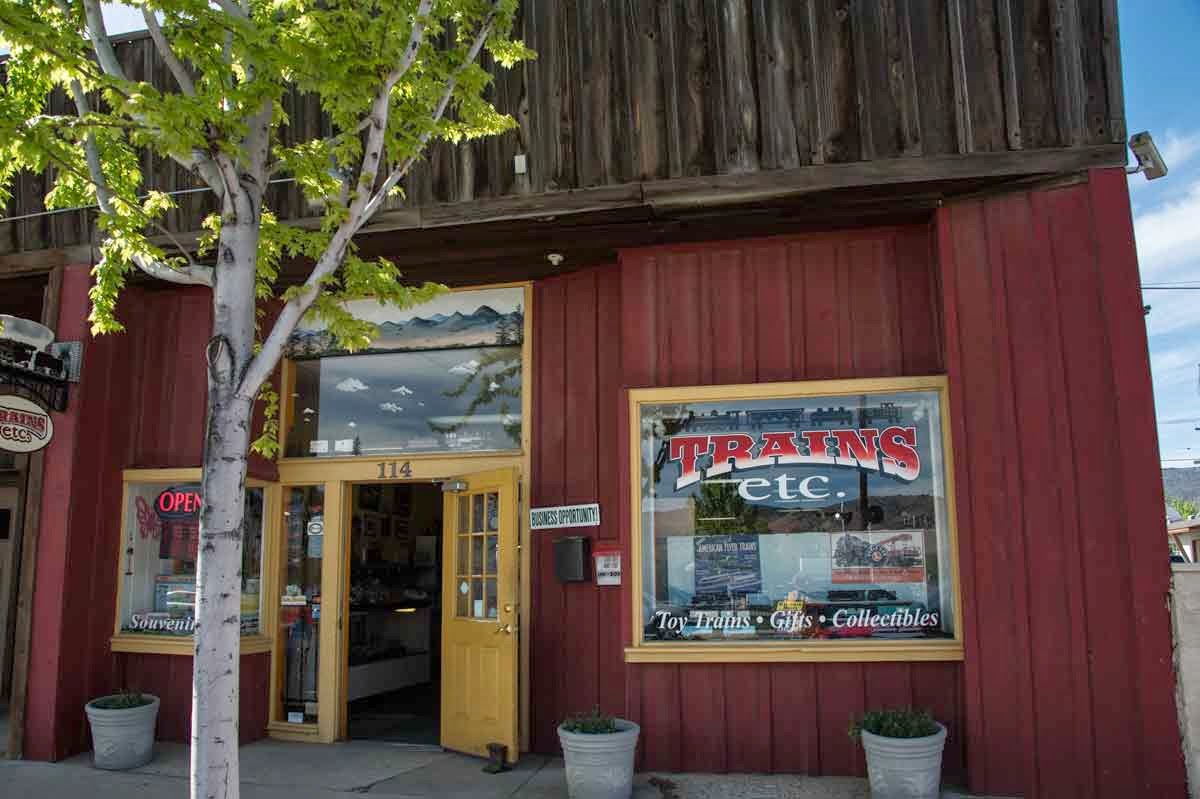 Like most train towns, the streets are laid out A, B, C, D, etc. with the train tracks lying between G and H.  This is the site of the original train station, now the museum with lots of artifacts and pictures.  The docents are very knowledgable and friendly .. so much so that when they hear a train whistle, they usher everyone out on to the back deck to watch it pass by.  Once gone, they continue with the tour. 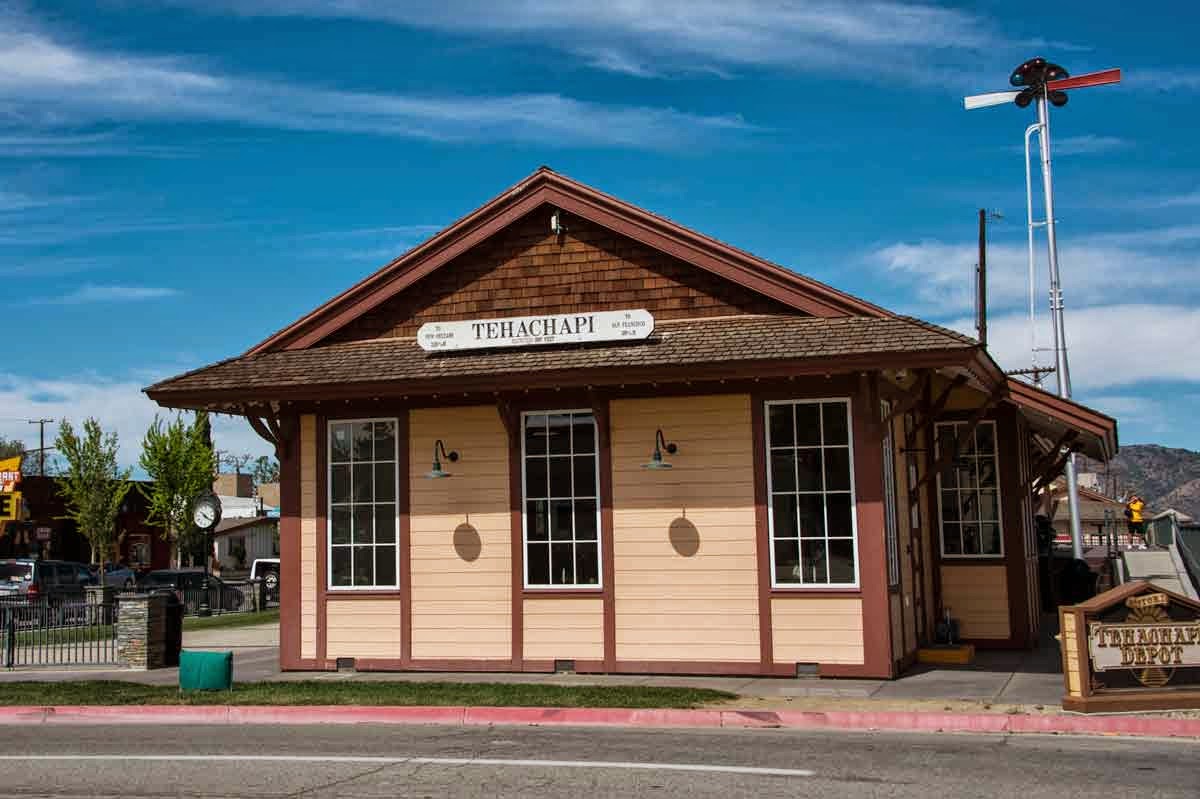 Little did we know there were devastating floods here that washed trains from the tracks, resulting in many lost lives.  Then she went on to describe the earthquake that happened in 1952, a huge 7.5 on the Richter scale from the White Wolf Fault, destroying most of the buildings of Tehachapi.  This quiet little town isn't so quiet after all. 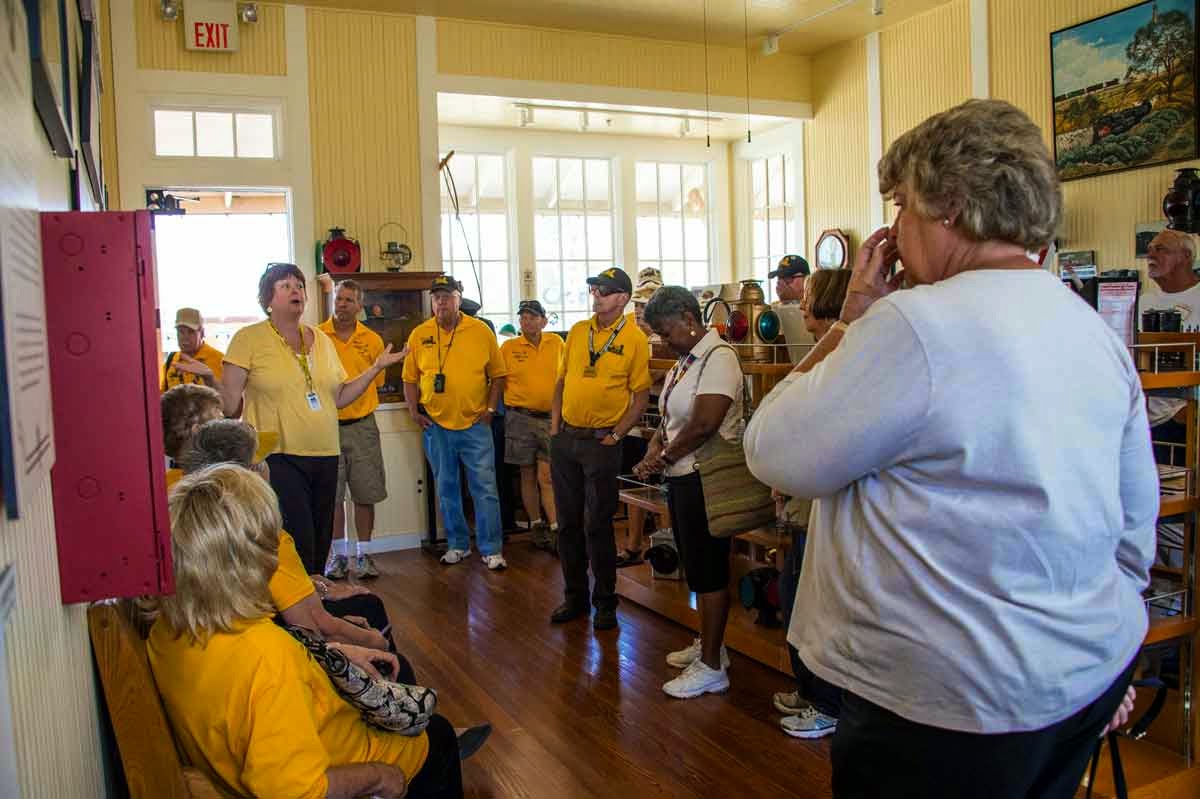 The depot was given to the city, whose volunteers rebuilt it in 2008, but within days of opening, some idiots shot off fireworks into the windows, exploding the building into flames, burning it to the ground.  Within one year, that same volunteer group rebuilt it according to the original drawings. 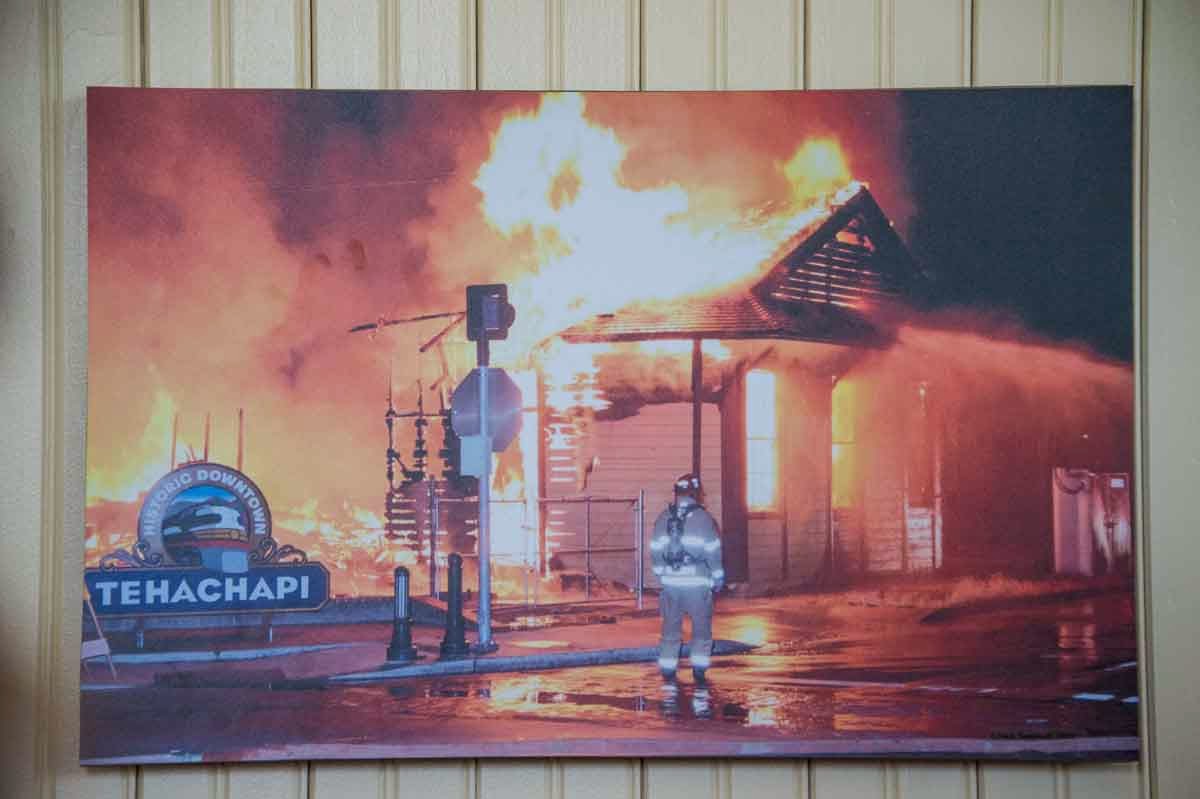 Way off in the distance, you can barely see the train lights ... at least you could when I was standing there.  They come up the hill from Mojave, barely hit a straight away before beginning the drop to the valley below. 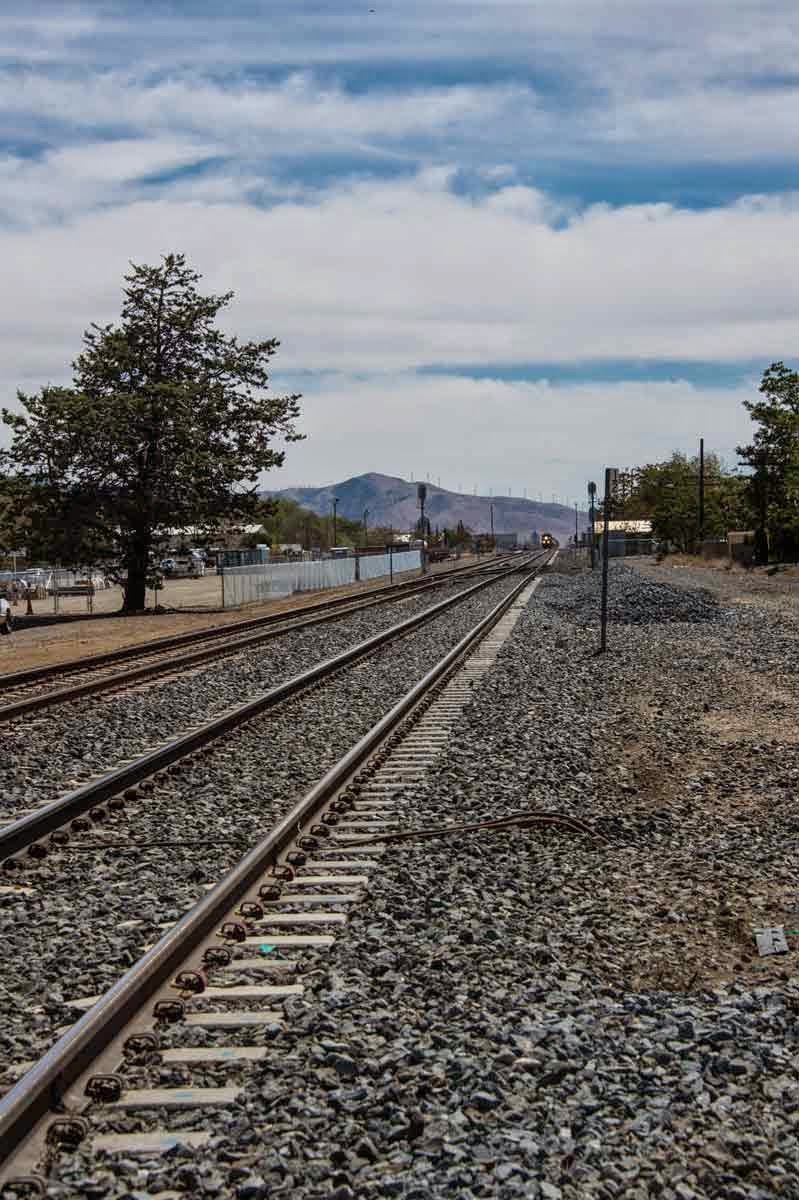 We all got waves and horn blows from the Engineers, since we were practically sitting on the tracks taking pictures like crazy. 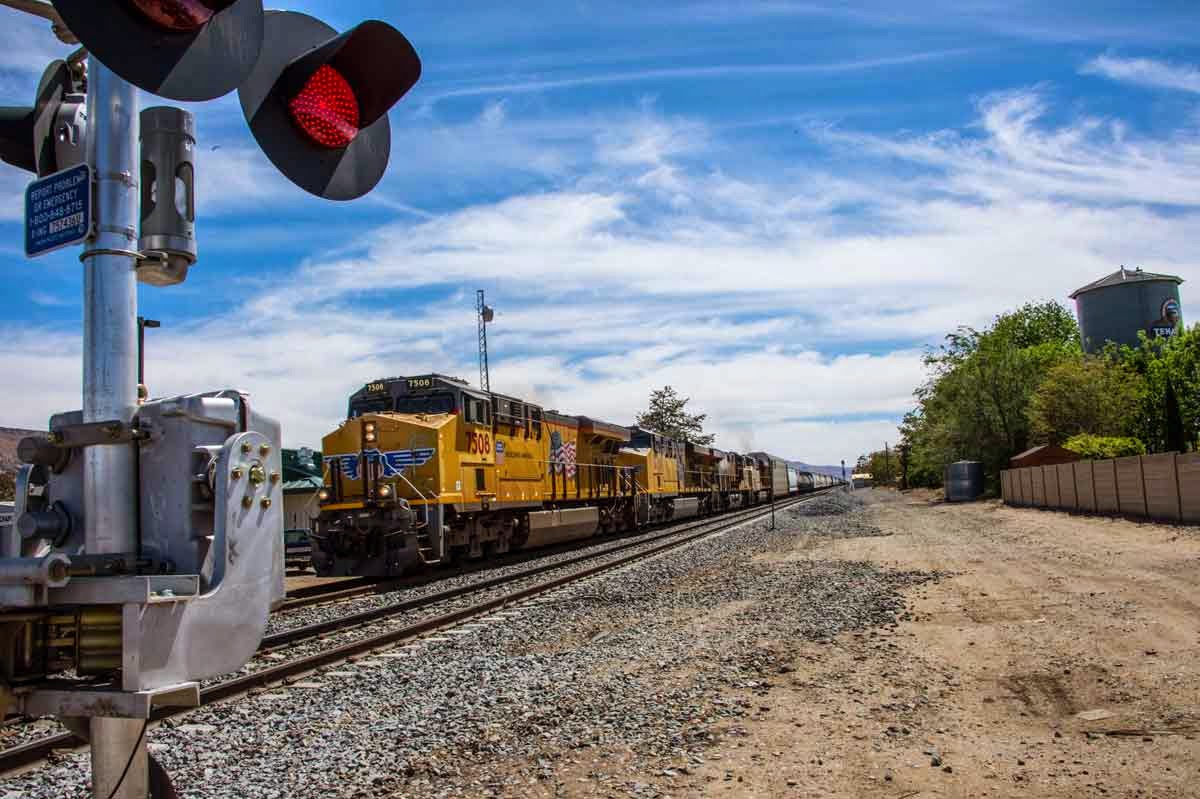 Maybe it had something to do with all those yellow shirts!!  Here's the entire group in front of a display of all the old signals once used on this track. 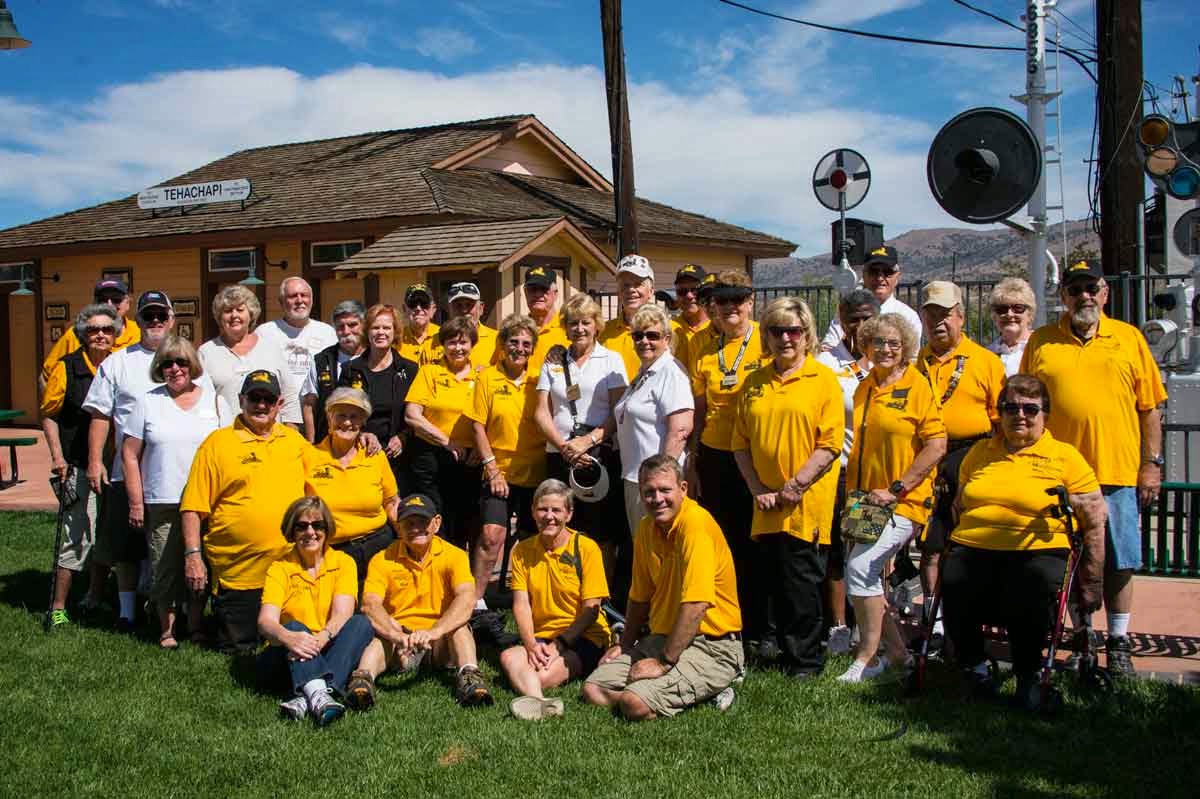 All that walking and train watching made me VERY thirsty.  Wouldn't you know, just half a block away is a German Bakery called Kohnen's.  They recently moved here from Ojai and have become a BIG hit.  They make wonderful sandwiches and salads, not to mention the sweets and bread.  Instead of lunch, I had a chocolate cream pie for $3.10 that was amazing!!!  Along with my Smart Water, it definitely hit the spot.  Don't miss THIS little restaurant!!! 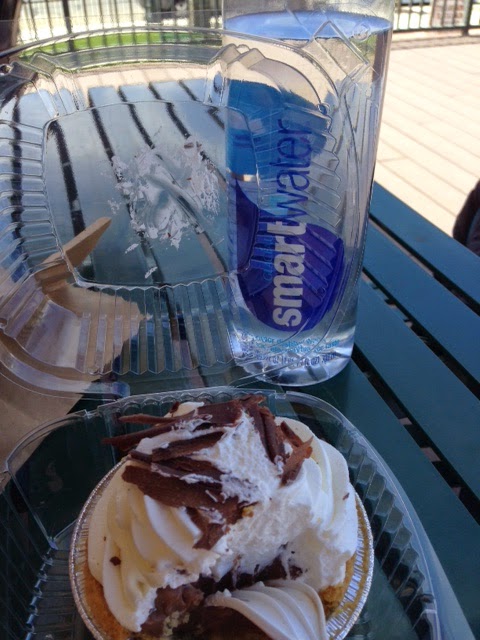 No moss grows under the feet of this group ... from there we took a tour of Adorable Alpacas, a small ranch just West of town.  Call ahead if you want to check them out.  These are the "boys", enjoying snacks of alfalfa. 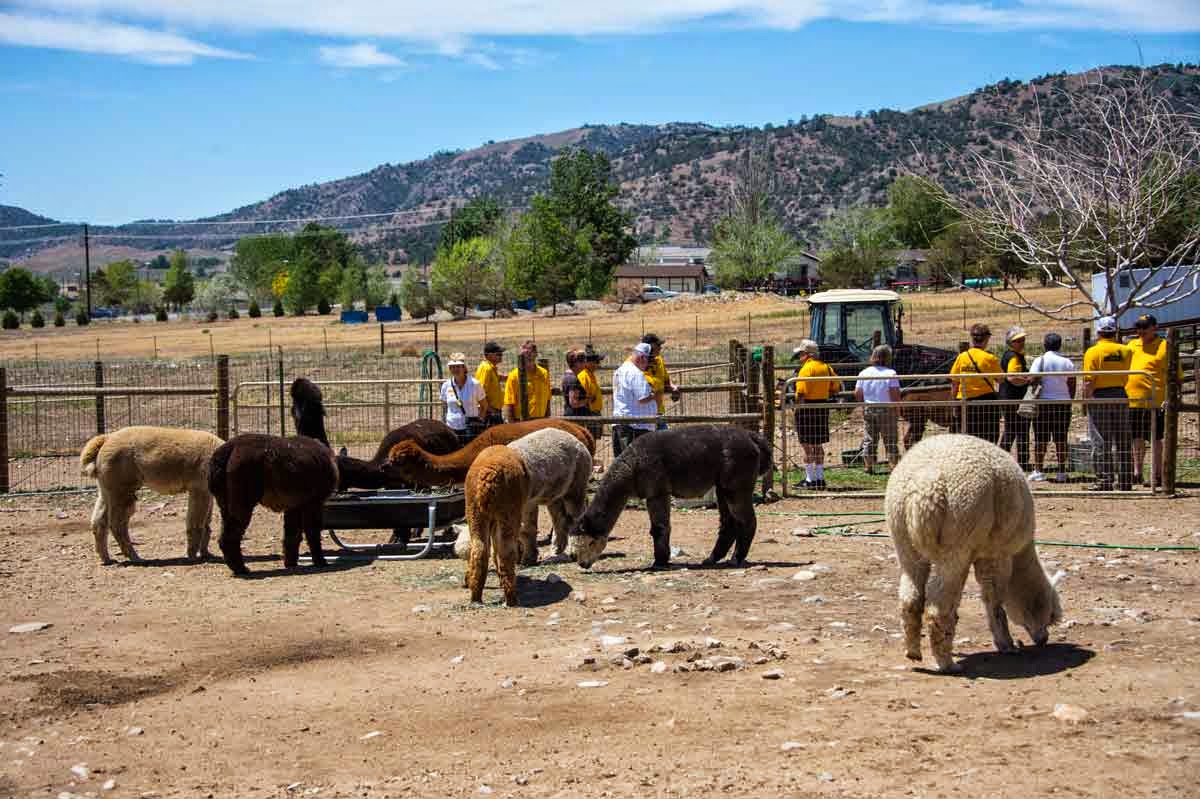 Up the hill are the mommas and babies.  The little one here is seven months old and cute as a button. 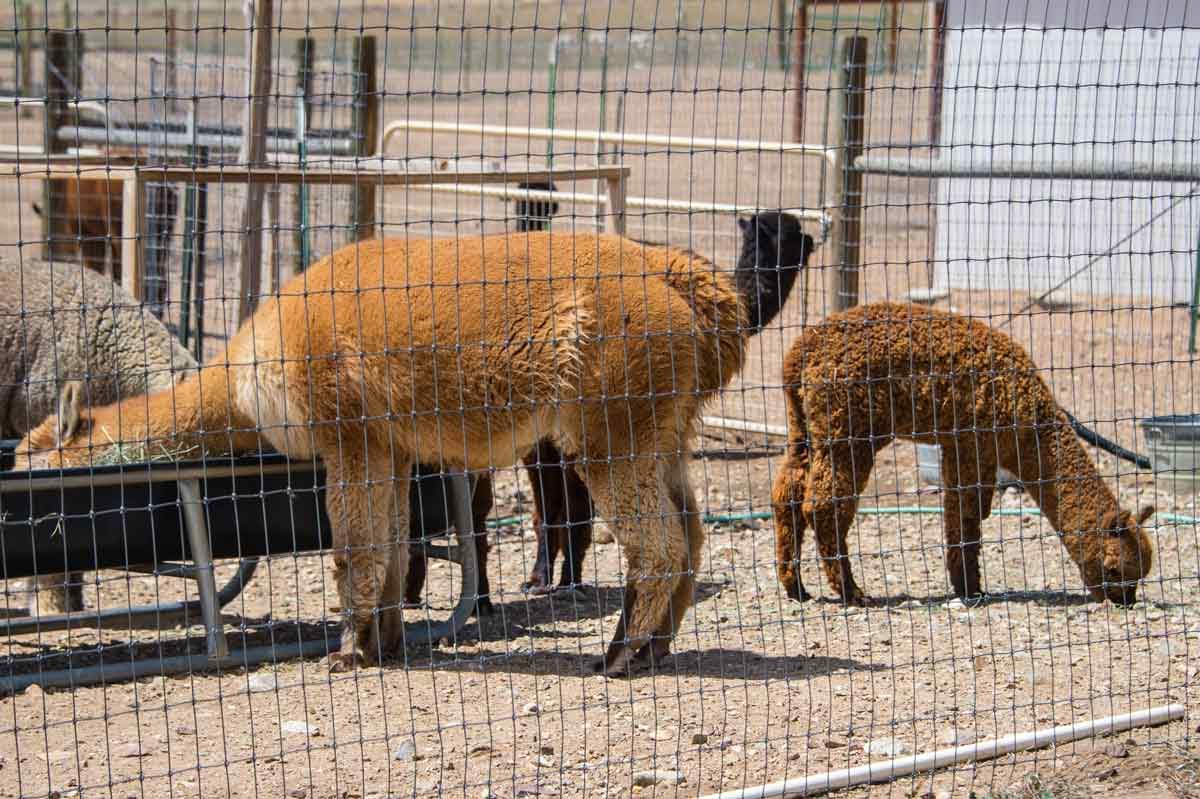 A face only a mother could love!!! 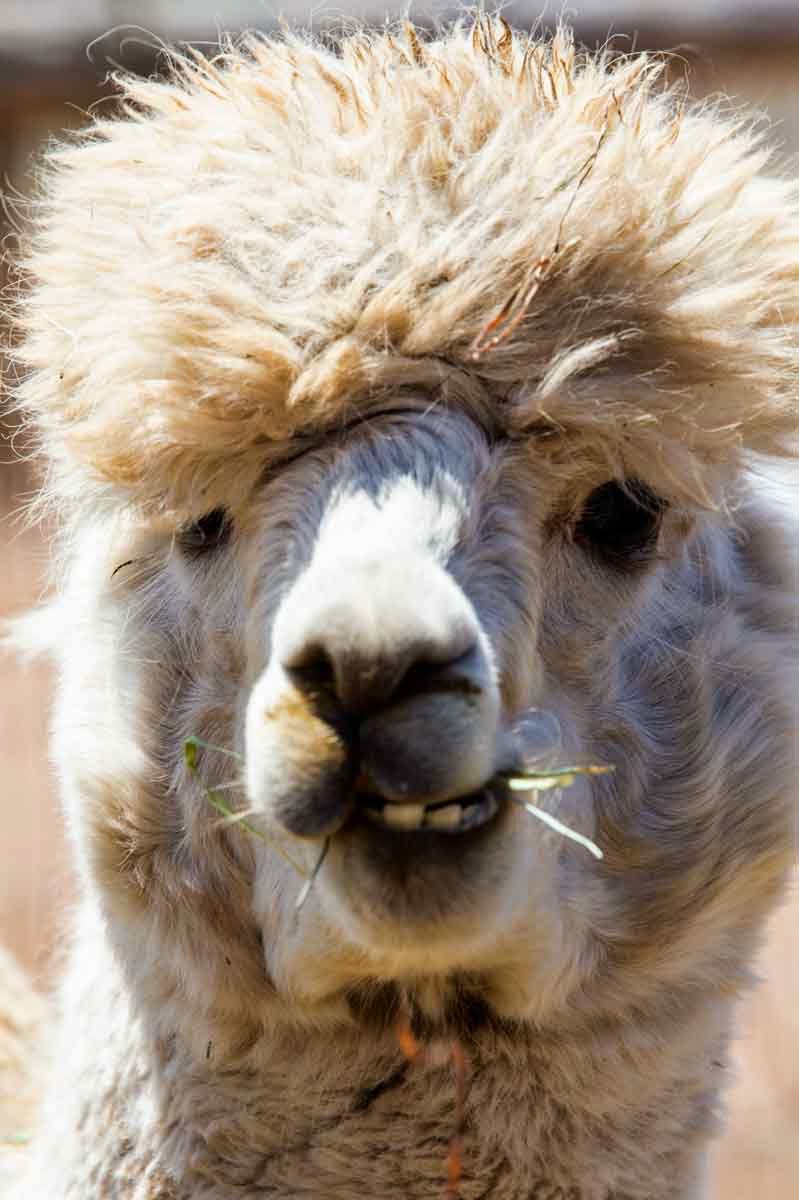 Shearing time is just around the corner.  Their coats differ in color from the ends of the hair to the base next to the skin.  Different colors sell for different prices ... both the wool and the animals.  Several here have won championships awards. 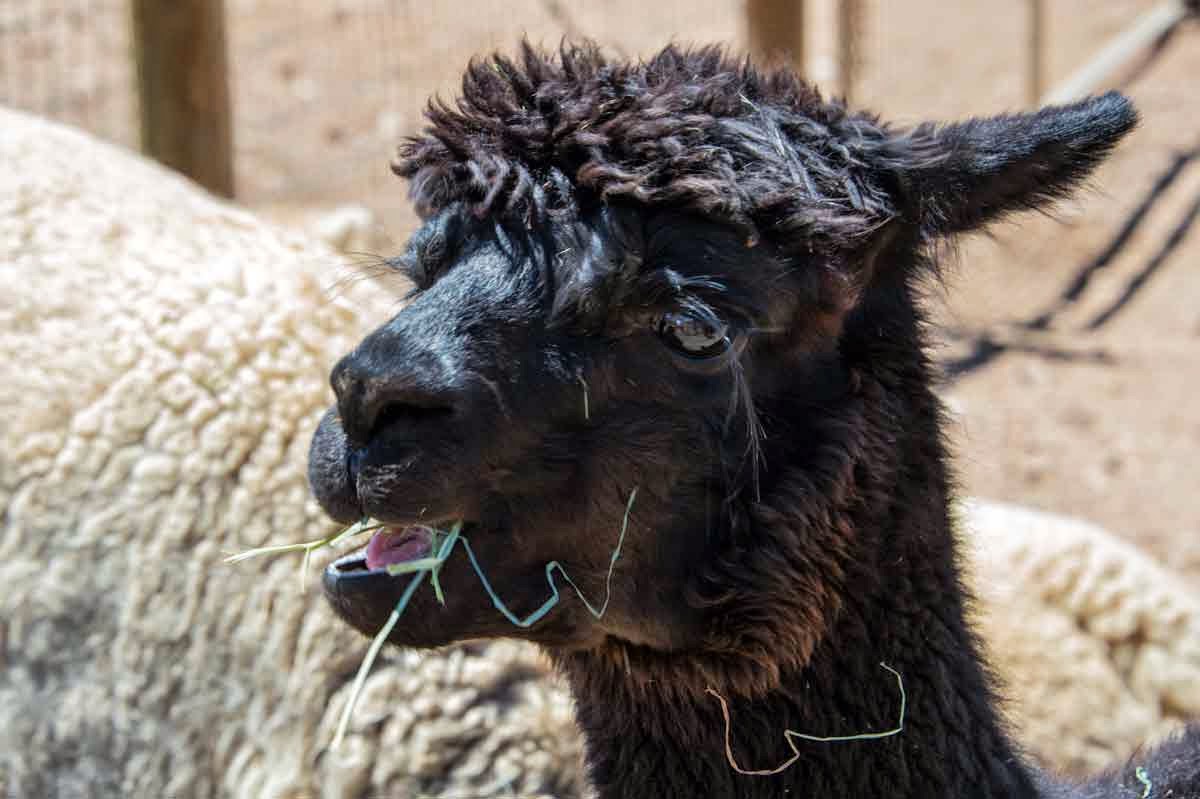 Don't you just want to hug them???  Alpaca wool is terribly soft and warm.  The owner has a small store with many items handmade from the wool.  I picked up a small bag of roving for spinning, just in case I find myself with nothing to do!! 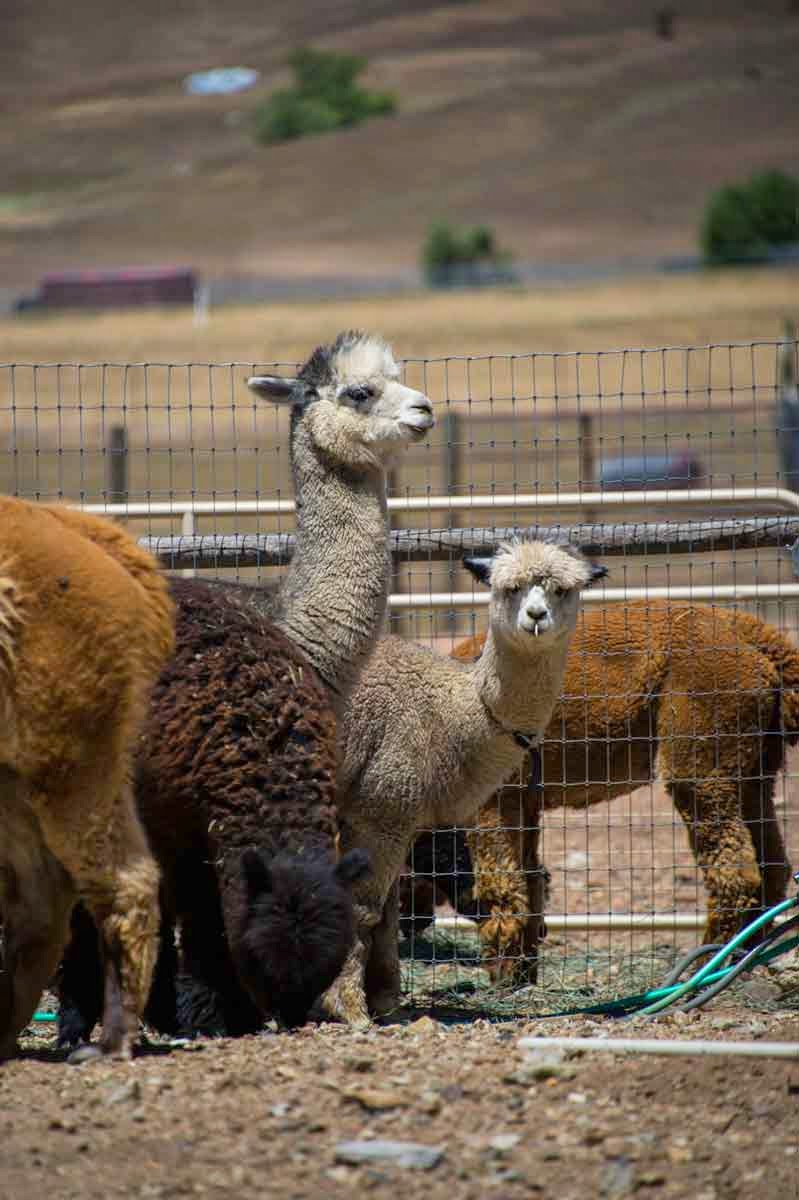 Don't worry about the coyotes ... she has three dogs as big as the alpacas (I'm not kidding!!) that keep the bad guys away!!  There's lots more to see in this area, including Ostriches, the Animal Education Center where you can pet a camel and a zebra and several wineries for tasting ... and we haven't even been to the loop yet!!  That's on tomorrow's schedule!!  One of our members stopped in at the airport about a half mile from our park, and flew in a glider.  You should have seen the smile on his face!! 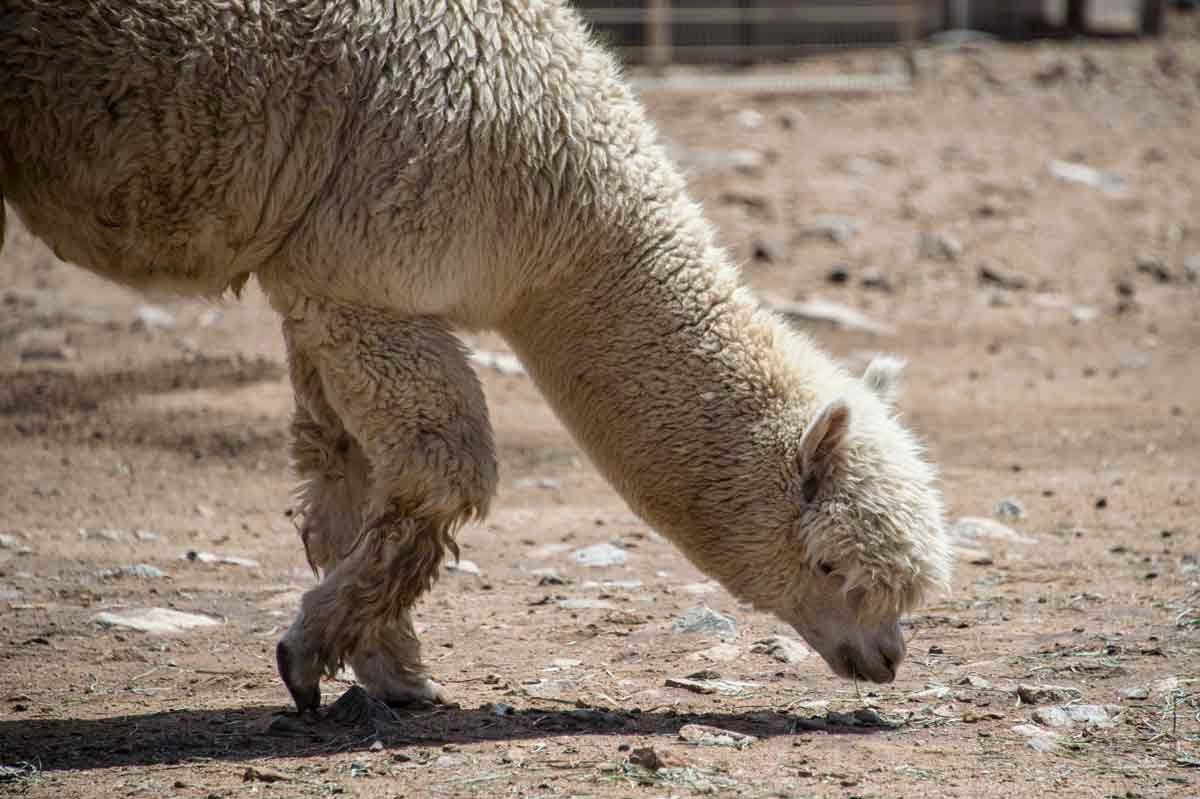 We had dinner at Domingo's Mexican Food on Valley Boulevard a few miles West of Old Town Tehachapi.  Originally it was the same Domingo as in Boron, but is now owned by a different family.  The food was excellent!!  I had tacos Al Pastor ... DELICIOUS!! 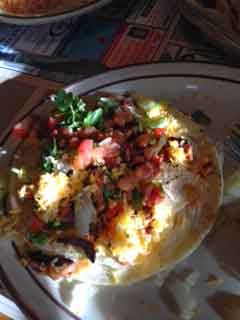 Followed quickly by their flan before it was ordered by all 35 of us!!!  I will definitely visit here again!! 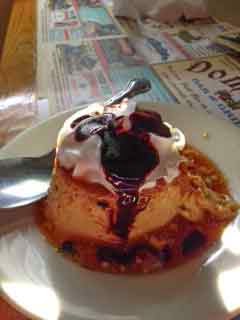 I stopped for a quick shot of the poppies as I drove back to the RV park .... 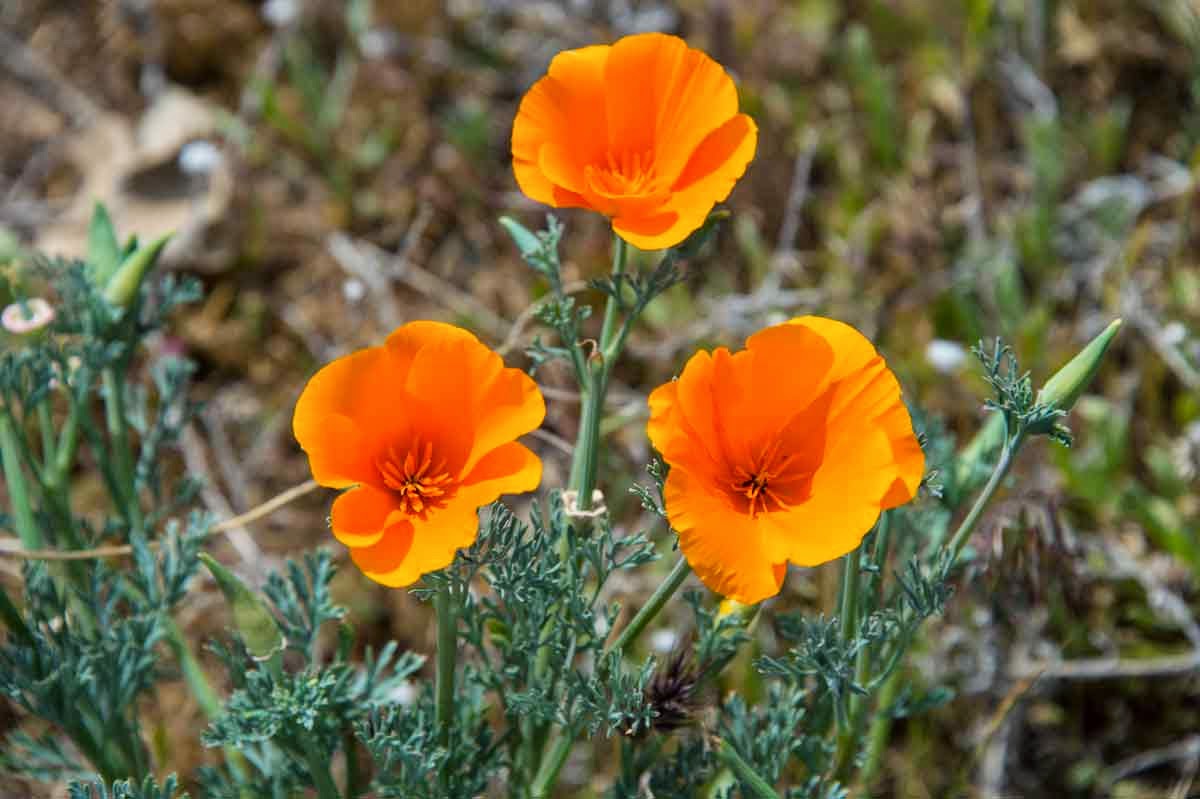 and waddled into the rig to collapse in my chair!! 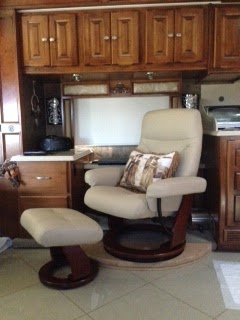 It's time for a walk with my big lens to see if Mr. Coyote has come to visit!!  Let's hope he likes his picture taken!!