Everyone was excited yesterday ... it's the day we get to be Ferrous Equinologists.  That's the art of spotting Iron Horse's on the rails.  In other words, we chase trains, which is why the Golden Spike group is in Tehachapi.  The first order of the day however, was breakfast!!  You can't chase trains on an empty stomach!!  A short walking distance from the RV park resides the Ravens Nest Sandwich Shop. 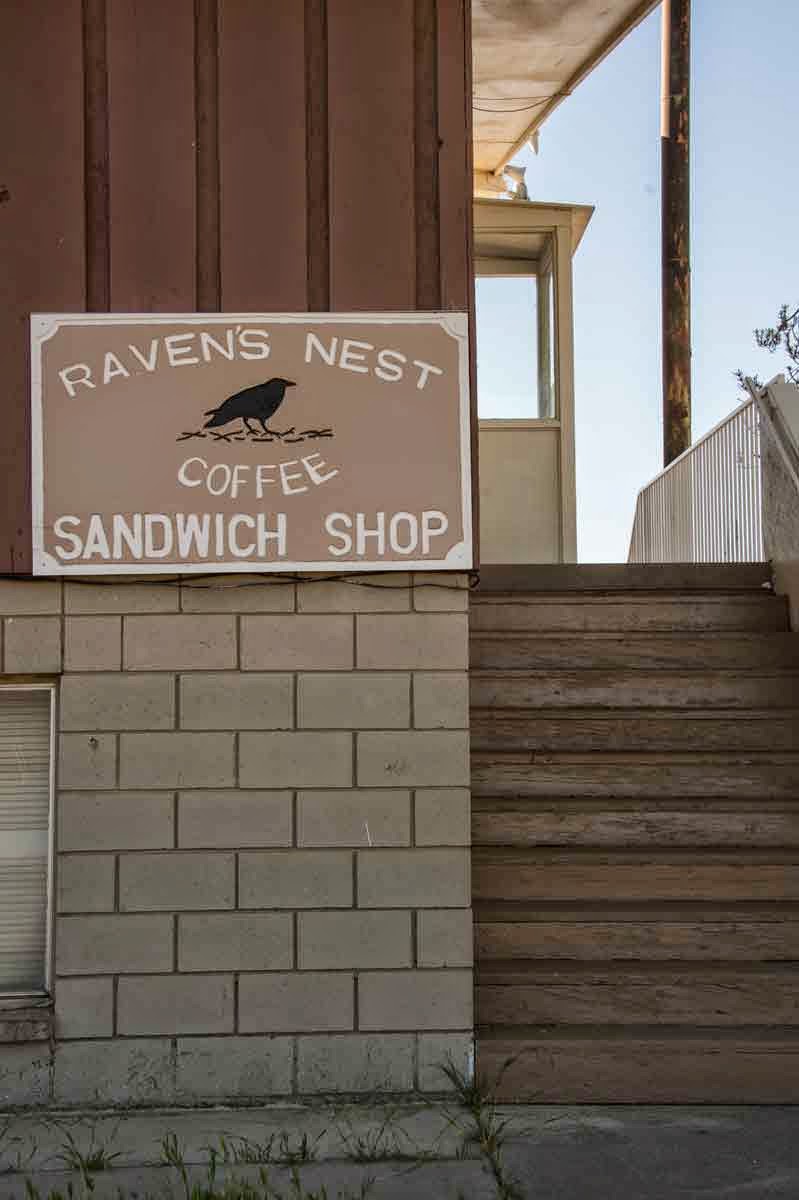 This is an airport for gliders and there are LOTS of them tied down all over the field.  A very interesting sport, but NOT on my bucket list.  At least with climbing and zip-lining, I'm tied to the earth in case of a fall!! 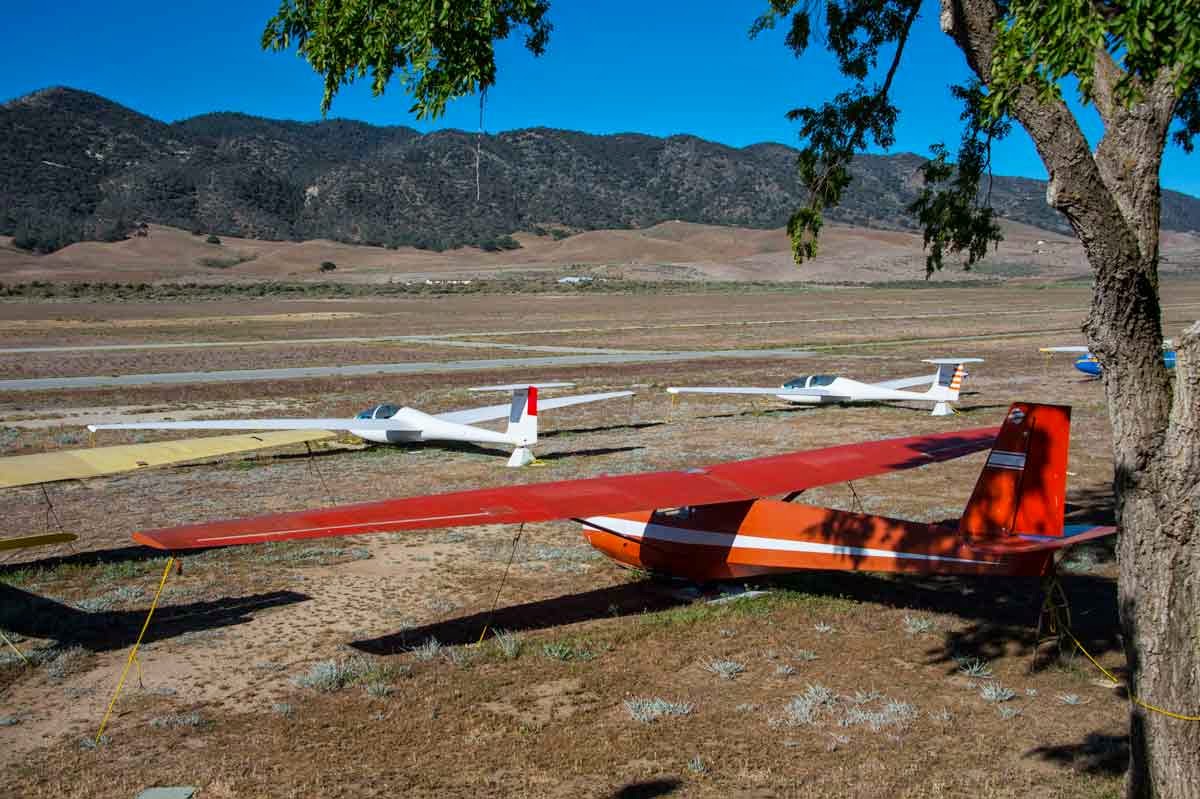 The small sandwich shop was a little overwhelmed by have 17 people show up for breakfast ... little do they know, there are 18 more standing in the wings!!  There's two young girls, only one who cooks, preparing breakfast in an electric skillet.  Needless to say, it took a little over two hours for everyone to be fed, but they got it done!! 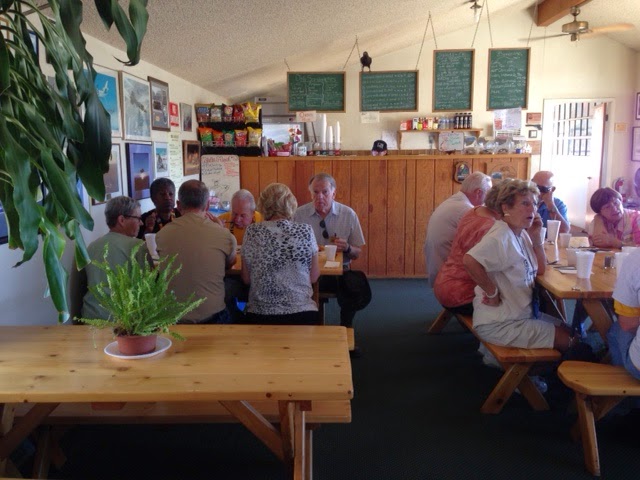 From breakfast, we car pooled down to Keene, a siding on the rail line, where the Cesar Chavez National Monument is located.  Inside, there is a movie describing his movement and the impact on workers.  He is interred in front of the beautiful waterfall at the far end of this image. 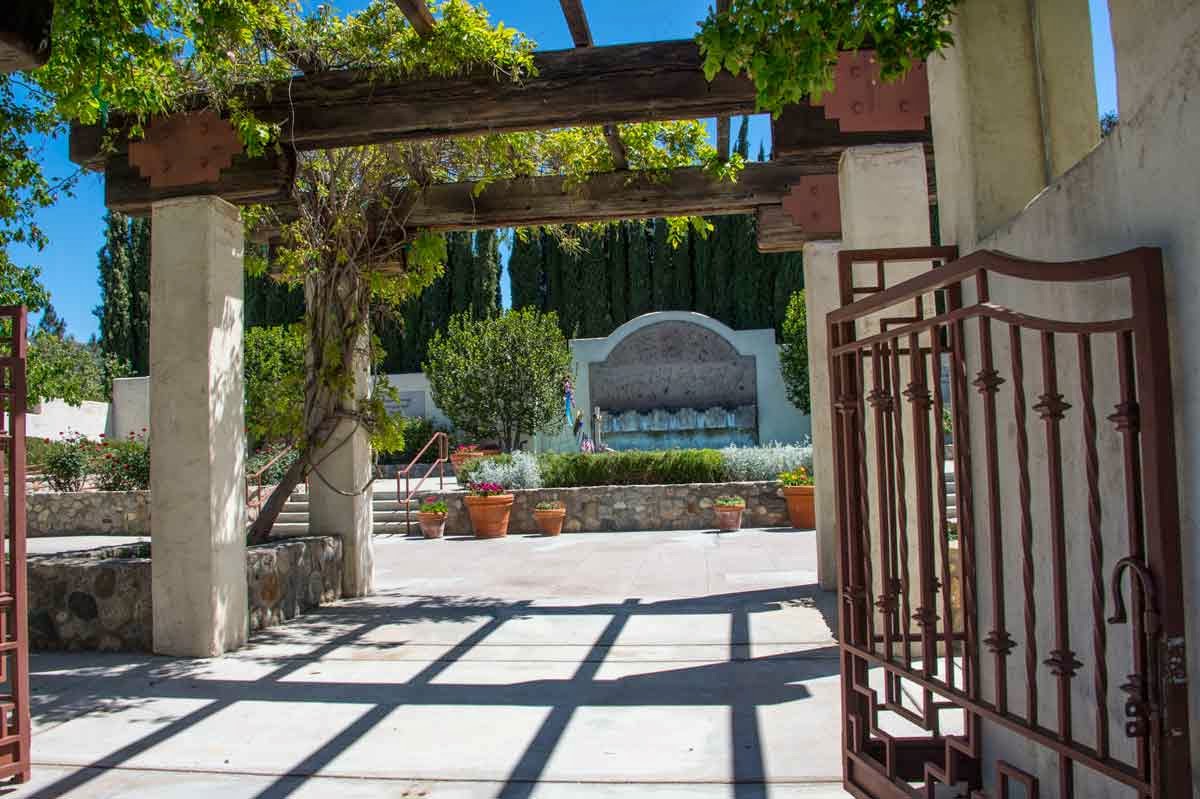 Surrounding the buildings are wonderful gardens of roses and cactus with pathways to walk on. 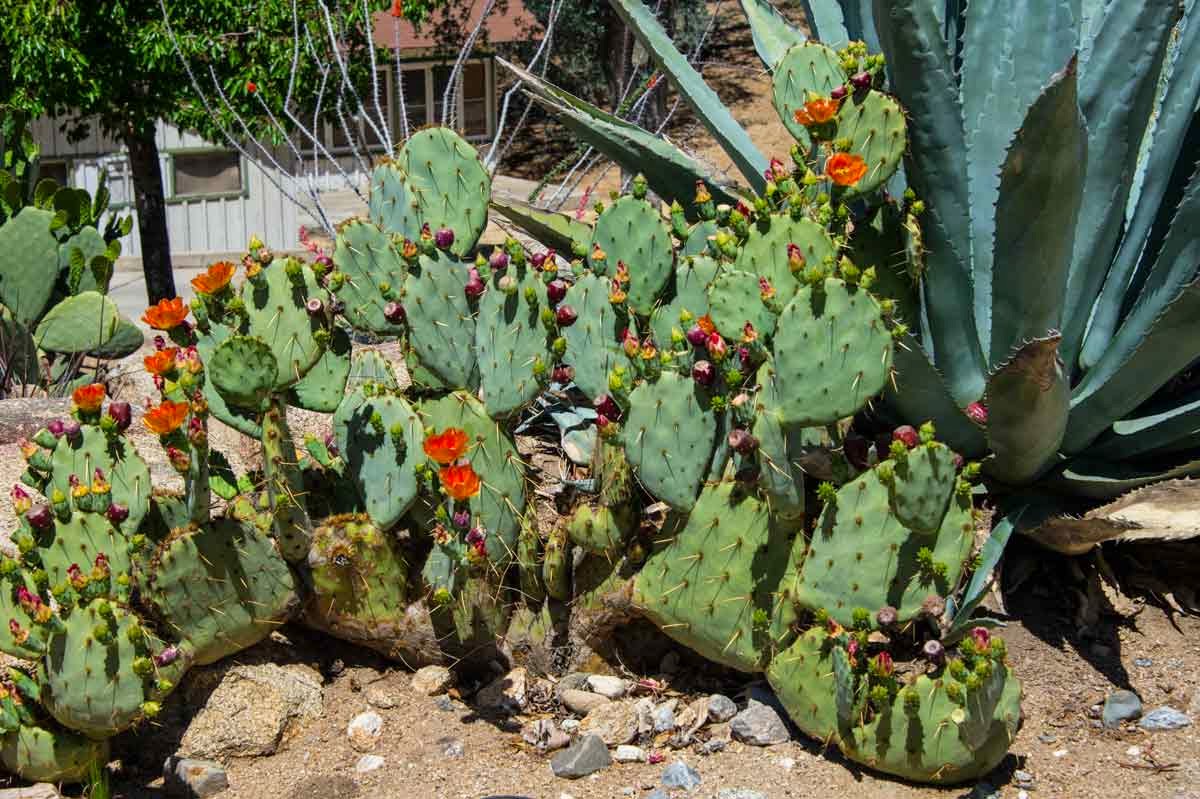 Finally, I get to photograph cactus in bloom!!  In fact, EVERYTHING was in bloom in this garden.  What a peaceful, quiet place to visit. 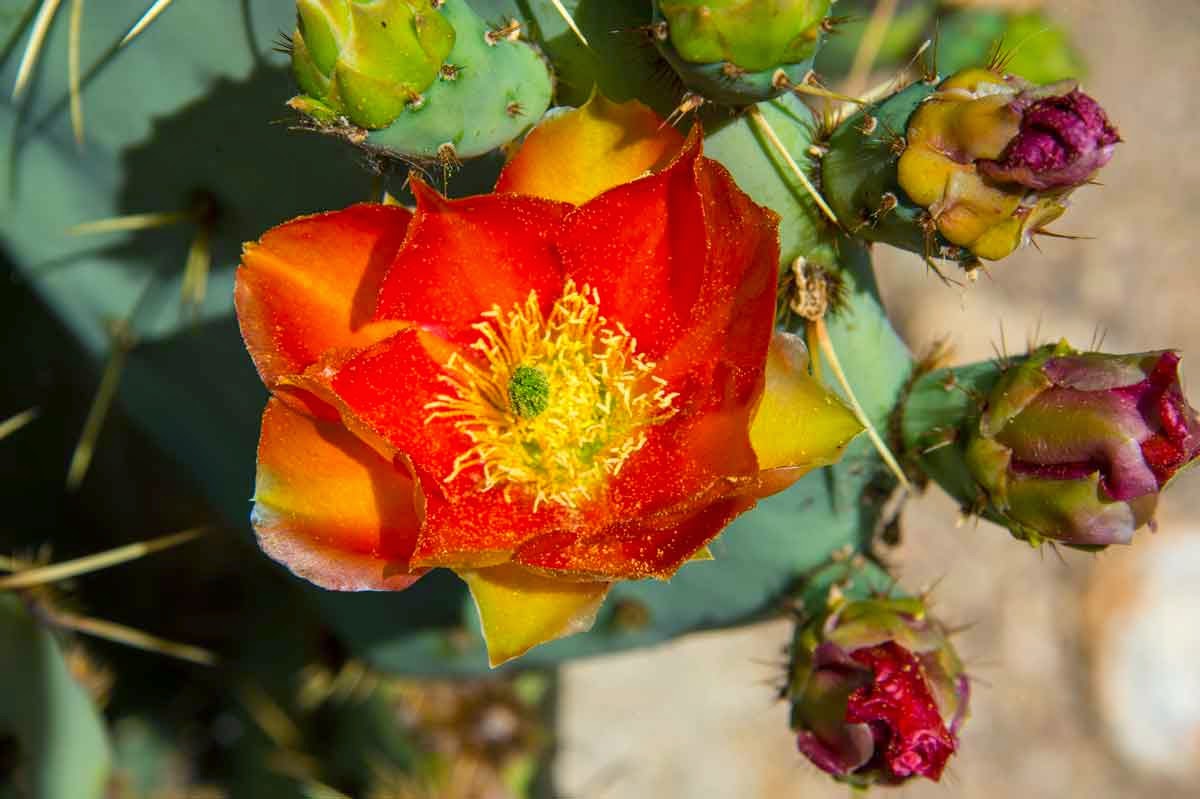 Even the ocotillo was happy with blooms on every spine!! 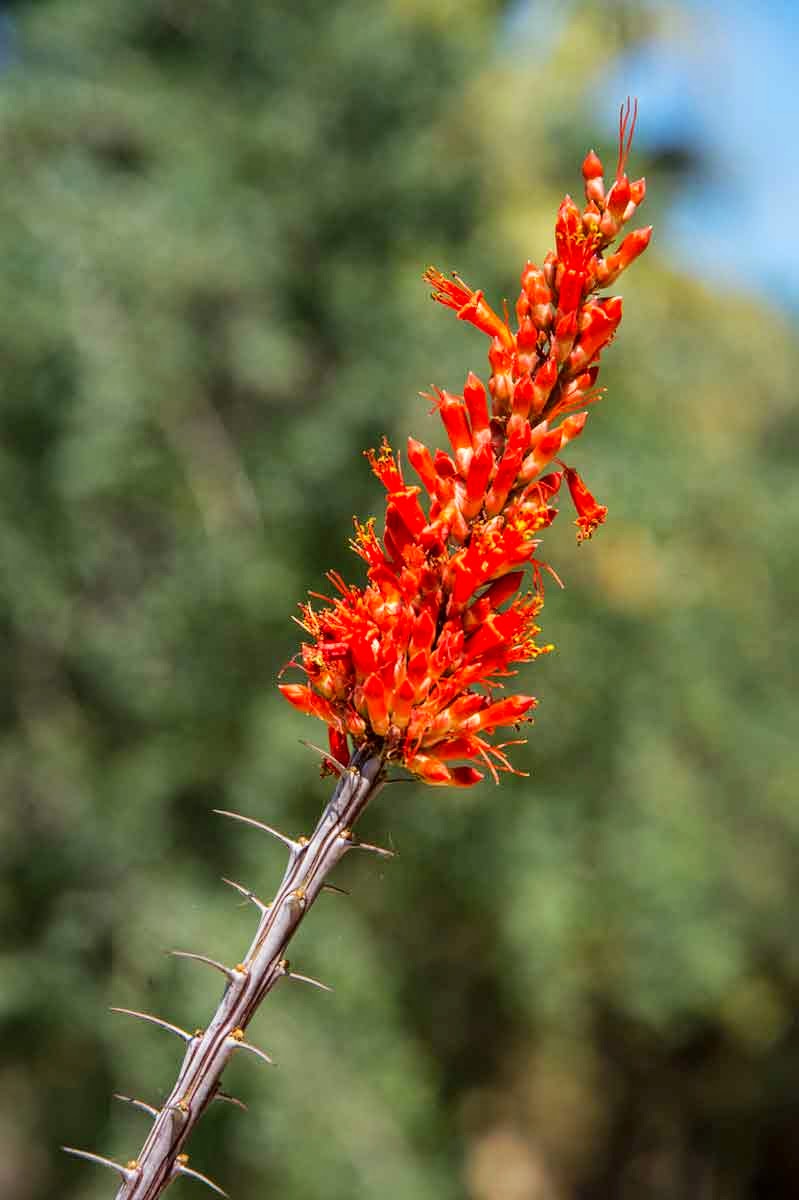 By now, we're all starving and luckily, Barbara and Tom picked up our sandwich orders from Kohnen's Bakery.  We staked out every picnic table just below the monument and began to chow down.  As soon as everyone opened their sandwich bag, there were WOW's and OH MY GOSHES as each sandwich was big enough for two people and delicious to boot!!  The train tracks lie just behind the group, so if a train comes by, we can rush to our cars and race up the mountain to see it pass around the loop.  But alas, no trains came!!

One of our members from Sacramento happens to be an Engineer and brought his radio.  Not that he could talk to anyone, but he CAN listen and hear what's going on.  Well what was going on, was nothing ... nada.  Eventually, he heard that the train engineer down the hill had called an emergency.  That means it's at a dead stop ... and so is every other train on the tracks because he can't be passed.  He told us the Brakeman (correct me if I'm wrong) has to walk the entire length of the train to find the problem, fix it, then walk the same length back before they can be on the move.  With these trains being a mile or more in length, we could have a LONG wait.

No problem ... we just sat in the shade and had a wonderful time.  Pretty soon we heard "I'm doing a brake test and we'll be on the move" ... YAY!!!  TRAINS!!  Course we had no idea which train engineer was talking, but we jumped in our cars and headed to the Loop anyway!! 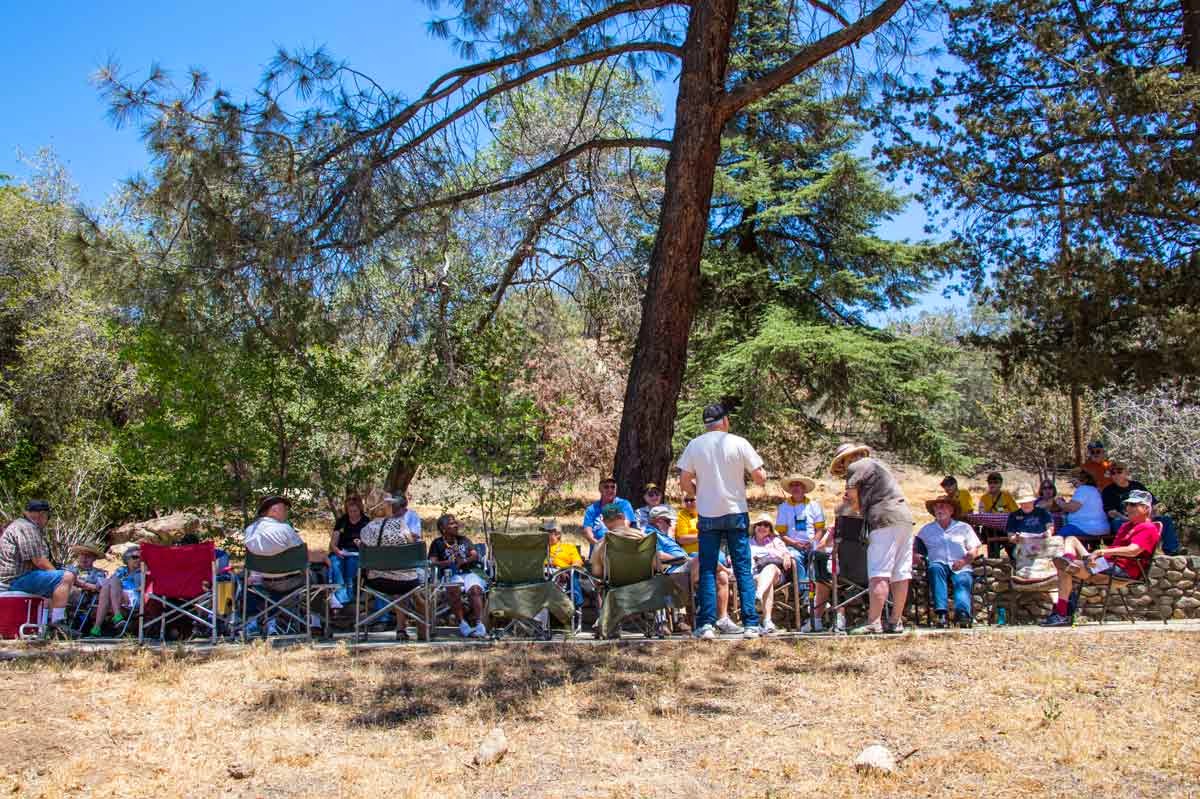 There are a couple of landmarks at the very top.  Drive carefully, this is a very narrow winding road, but only a couple miles from Keene!!  Still no trains in sight!  WHERE'S THE TRAIN??  It was rather hot, being mid afternoon by now, so I drove the couple that rode with me, back down the hill, when wouldn't you know it, HERE COMES THE TRAIN!!  They jumped out of my car as fast as they could, and I raced the train to the top, scaring the heck out of the guy on his motorcycle who was ahead of me.  I won first place in the "who can drive to Yosemite the fastest" game we played as kids .... so look out!!! 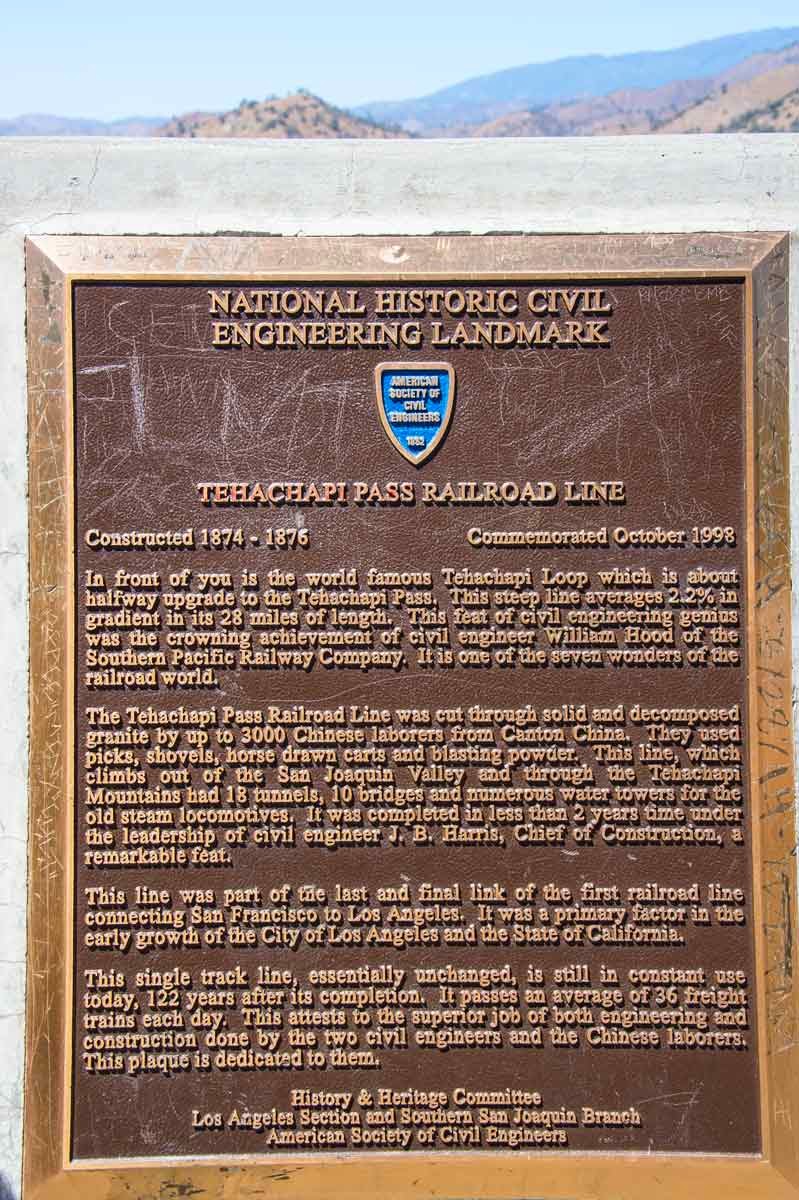 Once parked, I ran UP the mountain side to get a better view of the tunnel, but with fewer cars this train was too fast for me and I was totally out of breath, huffing and puffing so hard it was difficult to steady the camera!!  The engines came through the tunnel (the center line that looks like a ditch) and around the loop at a pretty good clip.  The tunnel line is deep, so the cars aren't visible, but you can see the tops at the bottom right. 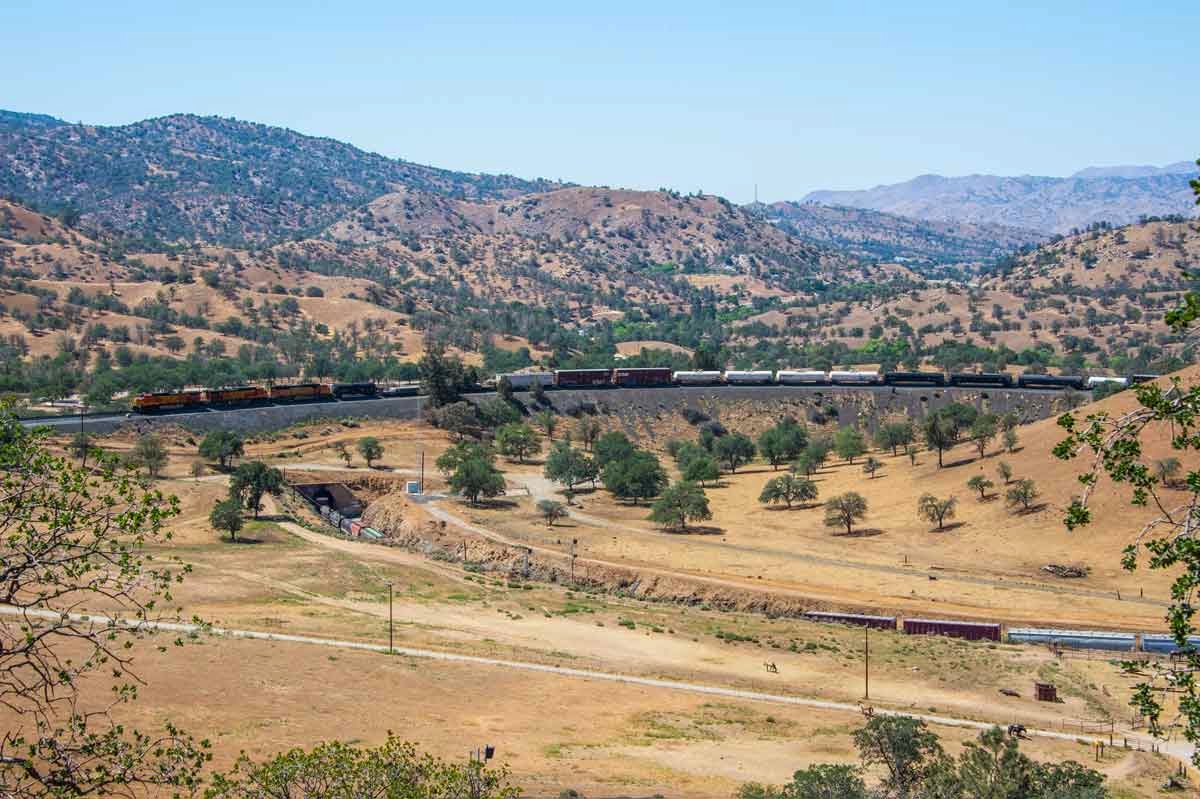 Once they come around, they head East in a snakelike fashion on the back side of the mountain.  Here's the two engines on the back of the train, pushing.  What a thrill!!!  I know it's just a freight train ... but if you are a ferrous equinologist, it's a sight to behold!!! 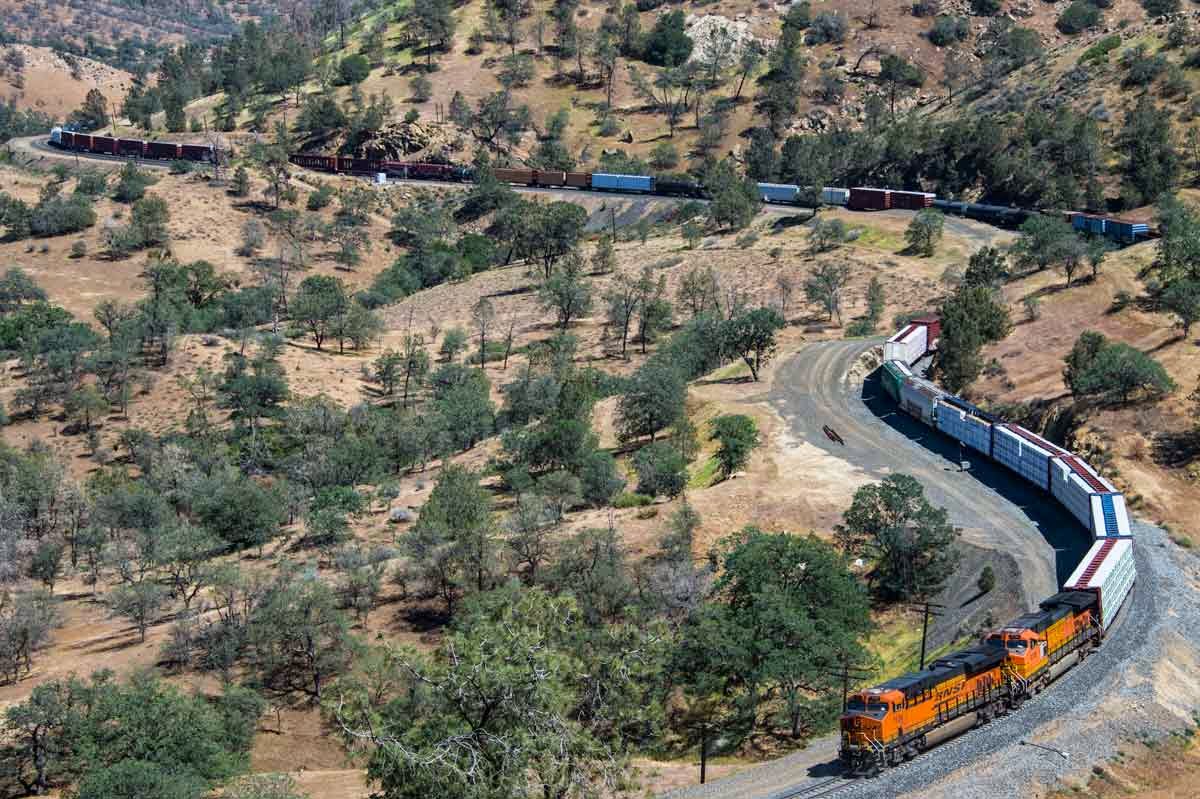 From the top of the loop, I continued on the winding road, going the back way into Tehachapi.  My crockpot has been on all day and it's a worry, so I went home to check on it and my puppies.  In no time it will be Happy Hour and dinner time ... just before the dreaded MEETING!! 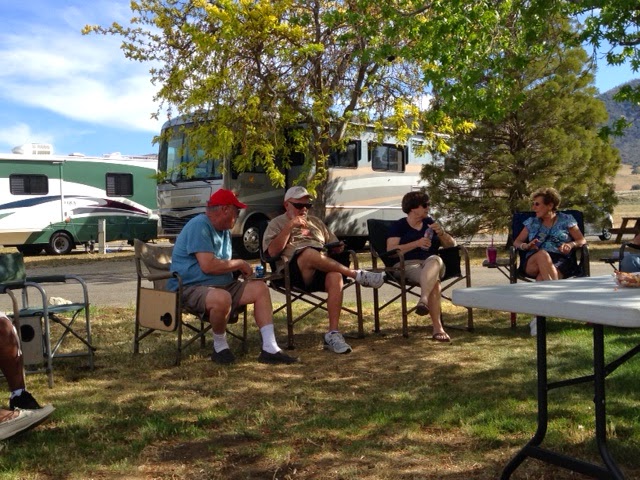 It was a long line for food ... train watching ... or waiting as the case was ... makes you extremely hungry!! 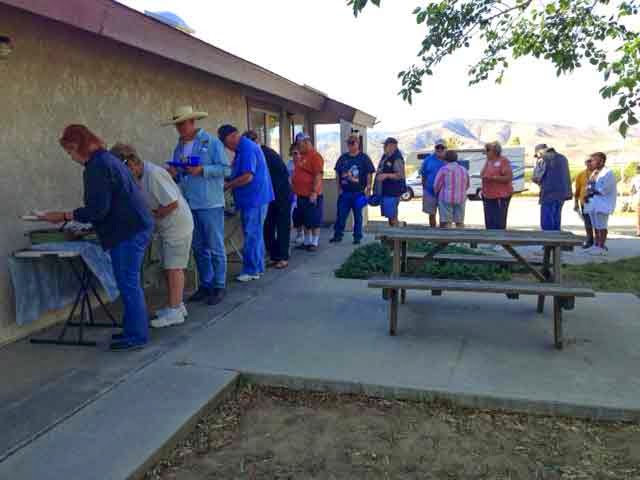 Once everyone was full and happy, I began the business meeting.  You see, in January, I was asked to run for an office.  I felt bad because the same people keep changing offices and doing all the work.  Okay, I'll volunteer to run for Vice President, because they don't EVER have to do anything.  I got elected immediately ... no surprise ... but it's okay, I won't have to do anything, right??  Within two months I got an email ... the President can't attend this rally.  It's okay, there's still a Treasurer who can help out.  Another week went by and I got another email ... the Treasurer can't attend this rally.  YIKES!!!

I immediately got on the internet to find out how to hold a meeting!!!  I was holding my breath until Kurt Simon, Past President, showed up.  Lucky for me, this is just a great group of happy people who didn't care how I ran the meeting and we got it done in record time!!  We even held an official vote!!  If you happened to be at that meeting, please don't give me any tips on how to get better at it.  I'm hoping that I'm bad enough, I'll get fired ... or at the very least, never be elected again!!!

This morning we say our goodbyes and most people depart.  I'm staying one more day to chase the trains through the loop.  This time I'm camping out on top of the hill to get a better view!!