I'm Not The Only One and DIETING!!

Google apparently doesn't like the time change either!!  It has taken me over an hour to get online!!  I was up at 6:00 ... really it was 5:00, but who's counting!!  Nothing would load, no matter how many times I hit that button ... which was a lot, because you KNOW if you hit it one more time, IT WILL WORK!!!   Maybe it's all those Escapees down at Escapade in Tucson that are using up the bandwidth!!  Good for them ... it means they're having a GREAT time!!

In the meantime, here in Central California, I'm passing the time cruising the internet and Facebook.  You never know what you might find ... like this cutesy cake.  Make his ears white and he'll look like my Cooper!!  I may just have to try this one ... I know ... but I'm desperate for things to keep me busy!! To point out the fact that I'm desperate ... I'm doing a test trial on NutriSystem, looking for a little weight loss, 25 pounds to be exact.  So much for the above cake!!  After five days, I can safely say I've lost 3 pounds, mostly because the food is horrible!!  I suppose if you paid for the premium version with frozen food (like Marie Osmond), it might be better, but I chose the $249 a month pick-your-own-food plan.  It all comes in one big box that does NOT need refrigeration.  That should have been a BIG red flag!!  Actually the breakfasts have been edible and lunch (mostly add water and microwave soups, etc.) I can choke down with no problem.

Here's what I've learned so far.  I eat entirely TOO MUCH!  Here is a "breakfast" .. check out the size of the muffin.  Those Costco muffins?  Those are FOUR servings!!  You do get to add to this, either a shake or yogurt.  A shake made with Almond Milk, 1/3 banana and a couple of strawberries goes a long way to keeping you satisfied.  At 10:00 I eat a piece of string cheese and for lunch, a minimum of two cups of vegetables along with the soup/entree cup.  Not bad .. I'm not hungry at all.  I AM about to float away from all the water I'm drinking however!! 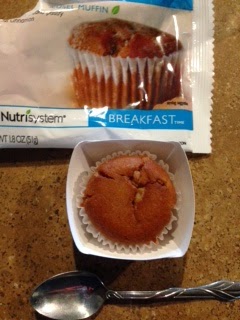 At 3:00, another NutriSystem chocolate shake ... I just put lots of ice in it and slurp it down so as not to taste it too much!!  Then comes the disgusting part ... dinner.  Another two cups of salad or vegetables followed by their entree, a gummy, nasty glue-like substance that tastes like Elmers Paste.  You can't tell the difference between the pasta and the sauce.  It's so bad, I've never finished one in five days.  According to the calorie count, I'm sure Lean-Cuisine would be a suitable replacement.  After about an hour of gurgling grumbling stomach, I get to have a dessert.  I picked mostly cookies, which was a good thing.  There are lots of nice tasting crunchy pieces to satisfy my sweet tooth, at probably the same calorie count as Famous Amos cookies.

I promised myself I would stay on the diet for at least one month, since it's cheaper than my normal food bill ... that is if I can continue to stomach the food.  The good news is that I have learned how much to eat and WHAT to eat, so hopefully when this torture is over, I can continue the program on my own.  By the way, there is NO ice cream on the menu, but yesterday I had to include it just once.  The chicken chili was so Jalapeño HOT, it burned all the way down and for another 20 minutes in my stomach.  My nurse friend Patty said to eat some ice cream to put out the fire ... a couple tablespoons worked just fine.

I'll let you know how it goes ... keep your fingers crossed I can stay the course!!!