It's interesting how places get their names.  Sometimes it's very complicated and sometimes it's as simple as a cannon washing ashore on the beach.  That's how Cannon Beach got it's new name.  Originally it was called Ekoli by William Clark of Lewis and Clark fame, Chinook for whale, because that's what he found there when his group explored this region. 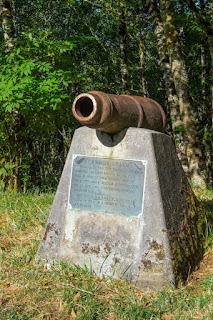 Laid out on this beach was a huge whale the Indians were rendering into oil using hot stones.  When his scouts brought some of the oil back to camp, he and Sacajawea went to look for themselves.  Can you just imagine the stink???

You can visit this exact beach today in your car.  No motorhomes allowed in Ecola State Park unless you are very small, mostly because several sections of the road have been washed away and replaced with single lane narrow rough, one-car-at-a-time sections.

Take a $5 bill with you unless you have an Oregon State Pass ($30 for the year).  Don't stop at the View Point, turn right and head to the big parking lot at the bottom.  Down a few steps and you will arrive at Indian Beach.  Simply named because there were Indians here. 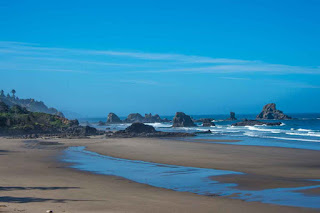 I went at low tide.  High tide will have you sitting in your car up top.  Three surfers were discussing the pros and cons.  The water is VERY cold and the tide crazy at this section.  If you watch the waves, they are coming from all directions at once.  That doesn't bode well for surfing. 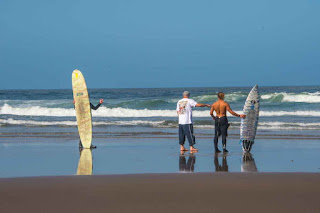 They finally got out past the potato water, but it took them almost an hour.  My guess is they were new to this sport.  Personally, with all the shark sightings along the beach this time of year, I think I'd rather stay on the sand. 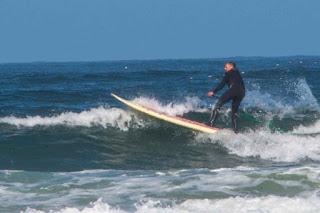 Here's what I was looking for.  Critters under the water around the rocks, and find them I did, but you have to look very close.  Most of the anemone were closed up, waiting for the water to return. 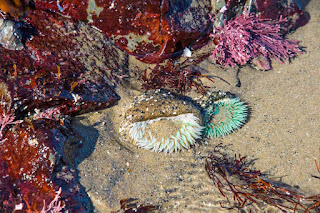 Remember those barnacles in the Aquarium?  These rocks were absolutely covered with huge masses of them, all closed up waiting for dinner to return on the waves.  You can tell how deep the water gets here ... this rock of barnacles was much taller than me!! 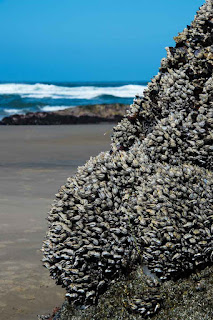 Wear waterproof sandals and pants you don't mind getting wet.  I waded out through the surf to get some of these pictures.  The water is COLD!! 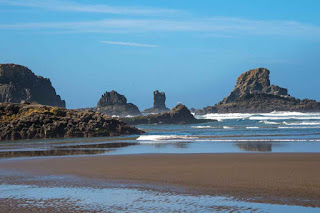 Starfish are everywhere, but you really have to look closely to find them.  They blend in with the rock walls pretty well. 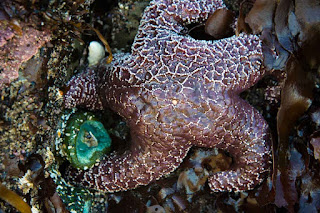 Luckily the kids running around didn't see this guy.  A sea snail that was upturned to the sun and out of water.  I set him down in a puddle under a rock and took pictures of him righting himself. 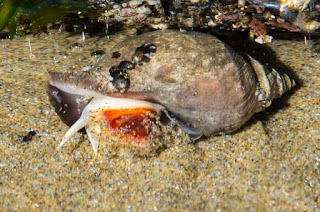 Even harder to find are little crabs.  You just have to watch the rocks for movement.  Barely visible in a hole in the rock, this guy was doing his best imitation of a barnacle.  Can you see him? 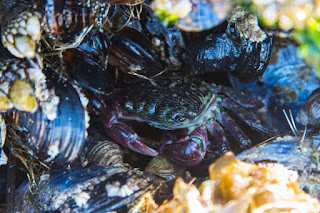 Here was another straggler that might have been smashed by someone ... a hermit crab carrying his house with him, which happens to be a similar shell to the sea snail above.  Also hard to see, these guys are teeny tiny ... less than half an inch across. 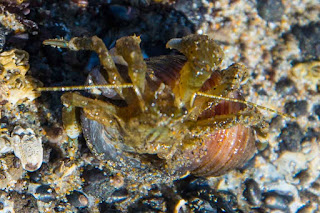 When the water returned and my pants got wet up to my knees, I decided it was time to get back on the beach.  Be careful walking in the water ... the sand melts under your feet very easily like quicksand and you can take a tumble into a rock.  Not a good thing when you're carrying a big backpack. 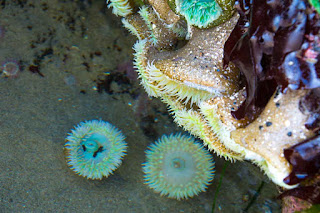 If you walk along the beach towards the south, this arch will appear out of nowhere.   Way in the distance you can see the hole with blue sky.  Keep an eye on the tide however ... it comes in quickly here and can leave you stranded in the bushes on the cliff. 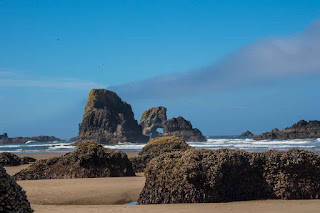 As you walk along, Terrible Tilly comes into view.  This is Tillamook Rock Lighthouse, built offshore, the most expensive one ever, which was officially lit in 1881.  With terrible storms and winds of up to 109 mph, she was thrashed and bashed requiring lots of repairs and replacement lighthouse keepers. 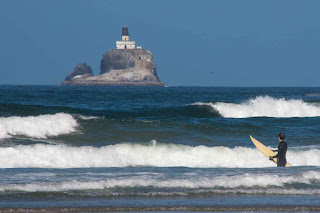 In 1957 it was finally shut down and replaced with a whistle buoy.  Within two years it was sold to a group of investors, who sold it to a group of realtors, who created the Eternity At Sea Columbarium.  After 30 urns were interred, they lost their license in 1999, which was again rejected in 2005.  It can only be reached by helicopter and is off limits during bird nesting season anyway.  They should just leave it to the birds.  With all the big storms, I imagine those 30 urns are in the drink. 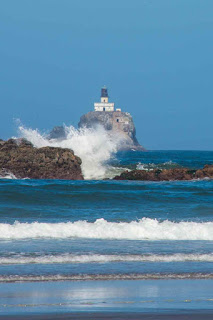 If you're looking for adventure, this is one of the best beaches around.  Go early for good parking and pack a picnic lunch.  Binoculars would be cool so you can see Tilly better.

From the beach, I headed on down to the crazy crowded town of Cannon Beach.  It was time for food and a little shopping ... but that's tomorrow's story!!