Staging ... The Process of Dumping, Filling and Cleaning!!

We're still parked in beautiful downtown Tucumcari at the Cactus RV Park, getting ready for almost two weeks of dry camping at the Balloon Fiesta in Albuquerque.  You know what that means, dumping tanks, filling tanks, trying to clean out all the dead spiders and creepy crawlers we've picked up along the way.  Kentucky and Tennessee were the worst for buggy friends ... I think I still have a cicada or two in the bays below!!

See that Tractor Supply sign???  Don't go there!!  Although they did hire a couple of locals, most of the employees are from out of state.  To the credit of Watson's Tucumcari Ranch Supply, they decided to "join them" ... you know, keep your enemies close??  They offered to set up one of their barbecue trailers out front along with a supply of their homemade donuts!!  Hopefully it will all work out for the best in the end!! 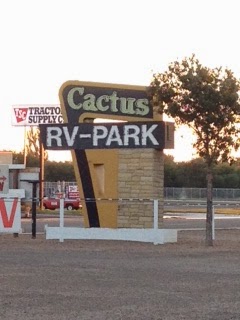 You can tell between working and cleaning, we've been playing a little.  This was Cooper's ball about 10 minutes after I gave him a brand new one. 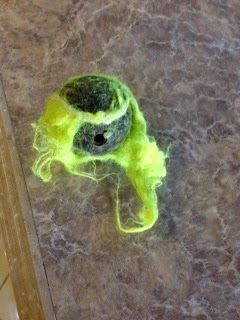 In between filling the water tank and reorganizing the closet, I've spent maybe 30 hours on this scarf!!  I know ... it's rather small, isn't it??  It's a pullover scarf ... different than the usual, but I like it enough to make another.  I hear this will come in handy on those chilly Albuquerque morning balloon launches. 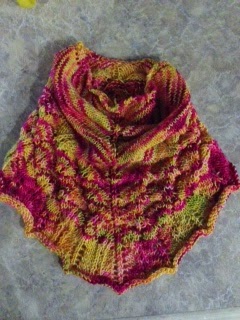 The out-of-business motels on Route 66 outnumber the open ones, but a few are still giving it the old college try.  The Roadrunner Lodge has a brand new sign, new paint and remodeled rooms for your sleeping pleasure.  We stopped in for a cache near here and wished them good luck!!  It's just so cool to see these old 50's hotels come to life again!! 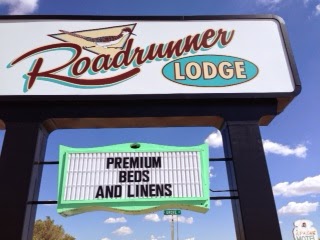 Lunch was at Watson's BBQ of course ... yummy in the tummy!!  Their barbecued turkey was awesome ... and you get a cookie!!!  I'm sure we'll be back before we leave!! 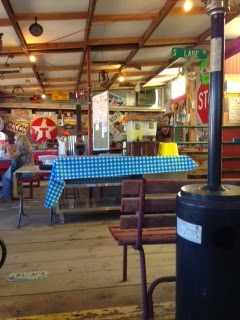 After lunch, we walked across the yard to the store to see what they might have ... and I found one of the best treasures ever!!  A large 20" wide bowl for my "cowboy" castle ... not the mobile one, but the real one.  Talk about a great idea for a Western craft!  I've never seen anything like this anywhere!!  The cool part is, I have several old ropes and lots of barbed wire at home ... so I'm sure I can make a couple more small ones!!  Probably not good as a yarn basket, but I see LOTS of potential!! 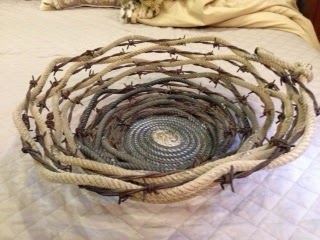 Tonight is one of the town's biggest celebrations at the newly remodeled train station, including food, vendors and fire eaters!!  Can't wait to see THAT!!!  Pictures tomorrow!!!