Richest of the Rich and Famous!!

The name most associated with the rich and famous, especially in New York, is Vanderbilt.  Cornelius "Commodore" Vanderbilt started with a small boat he used to ferry people across to Staten Island.  He turned that into the richest fortune in the U.S. and probably the world.  Between shipping and railroading, he made more millions than he could count.  He redefined what it meant to be wealthy.

Frederick Vanderbilt, born on the family farm on Staten Island, joined the family business of his grandfather Cornelius and father William.  He eventually inherited $10 million, as did his siblings, but instead of spending it, he turned it into $75 million.  He married Louise Anthony Torrance, 12 years his senior, in 1878 and built this mansion as a spring/fall home ... one of the smallest the Vanderbilts owned. 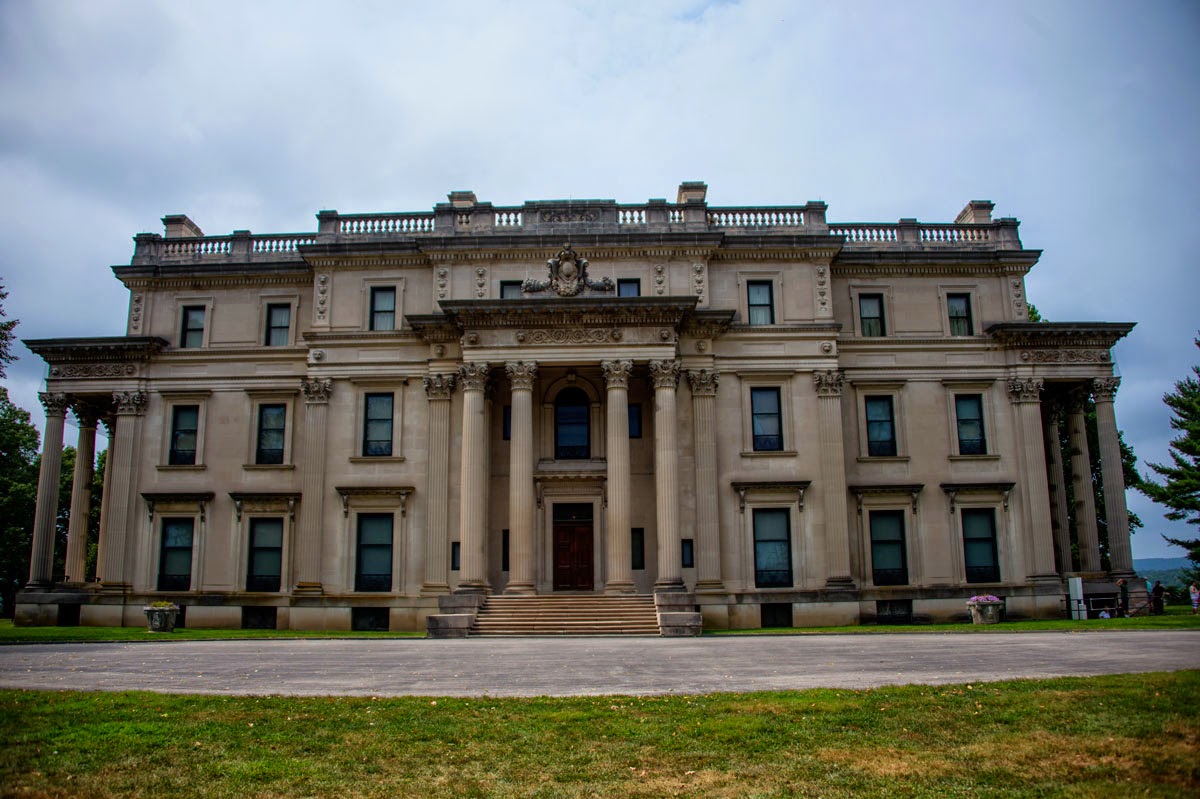 Crazy as it may sound, they only spent a few weeks a year here.  60 employees from the local area kept the place going when the Vanderbilts were gone on their yacht, or in their townhouse in New York or touring Europe on shopping sprees.  We figured that out to be $21,000 a year (in 1880 something) just for employees for this one place.  Yes, I think that's rich!! 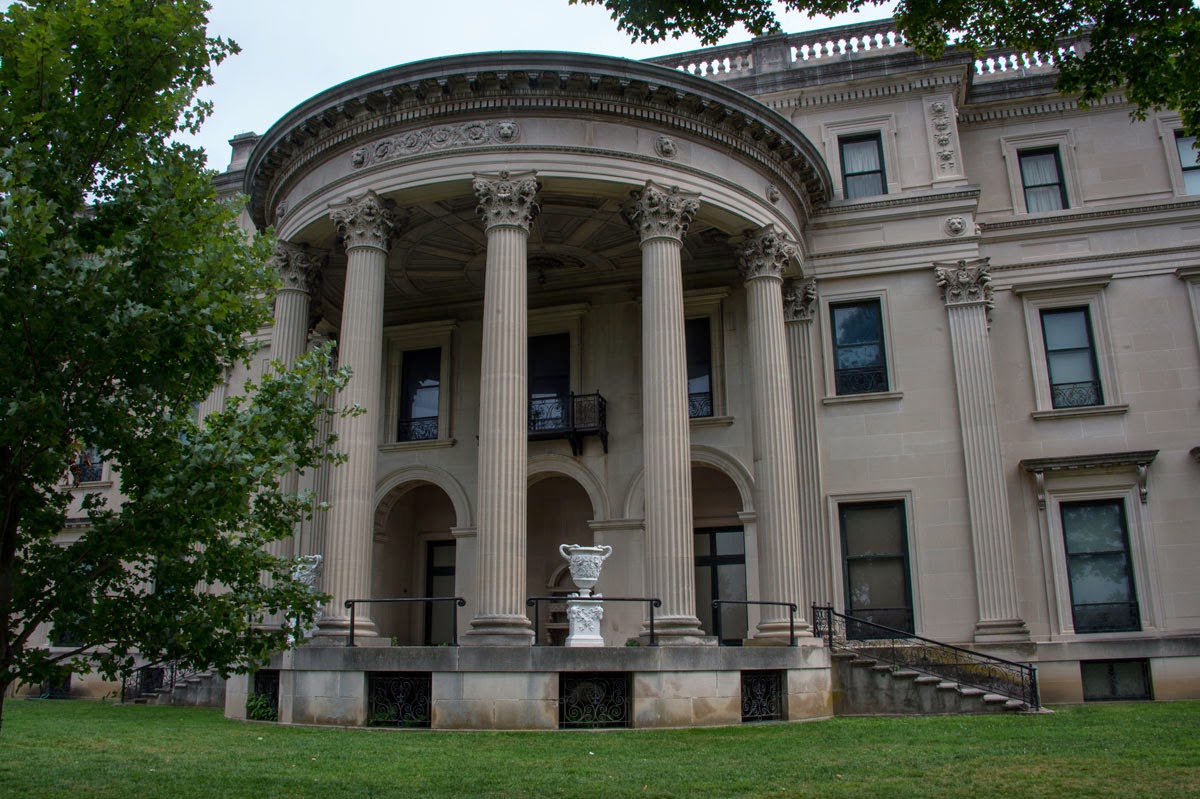 The home and grounds were donated to the National Park Service by a niece who inherited most everything, and didn't want to pay the taxes.  The Park Service has been restoring rooms ever since.  The entry is huge, surrounded by green marble columns from Italy.  No expense was spared!! 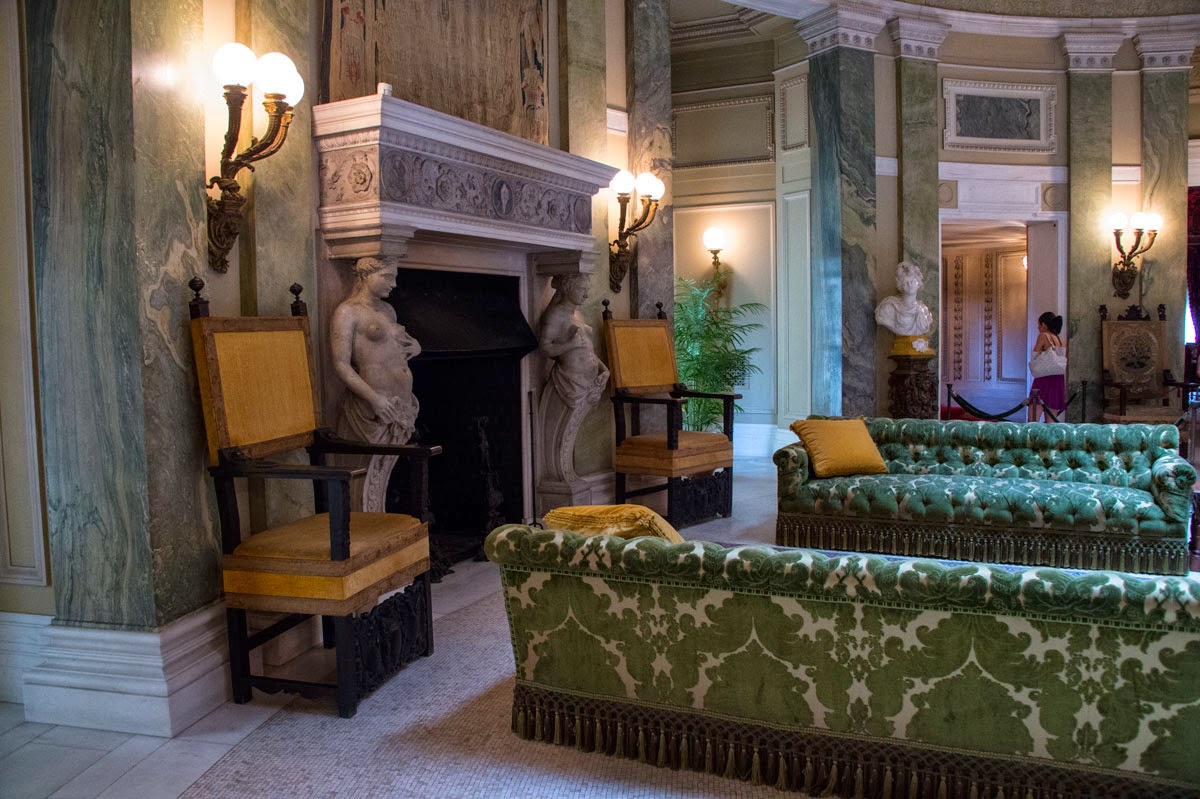 There is artwork everywhere, from marble busts like this one to the girls holding up the fireplace mantle, to tapestries hanging everywhere, including some made in the early 1600's. 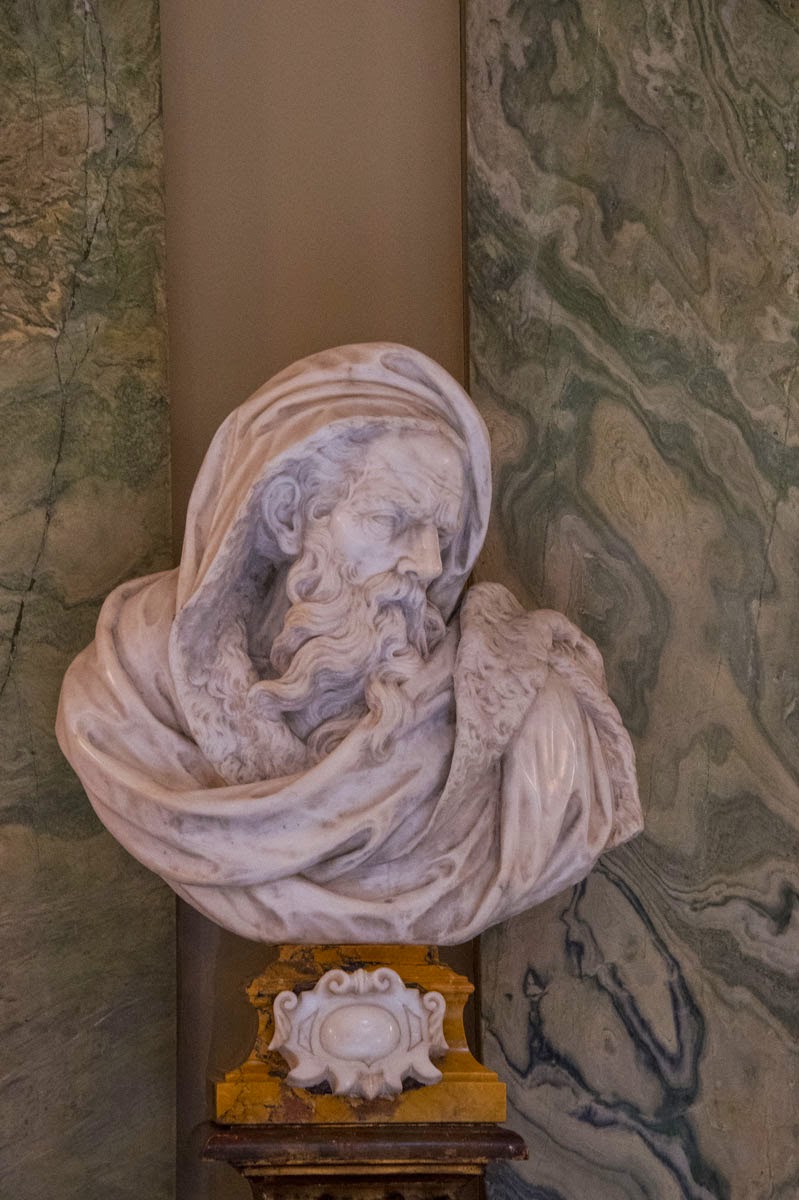 Around the main entry way are several rooms, including the "French" room that nobody spent any time in.  I mean really, it's just too small for my taste!!   All the gold here is real gold leaf, with 24 carat gold tassels on the drapes.  I'm sure Cooper and Jessie would appreciate it though!! 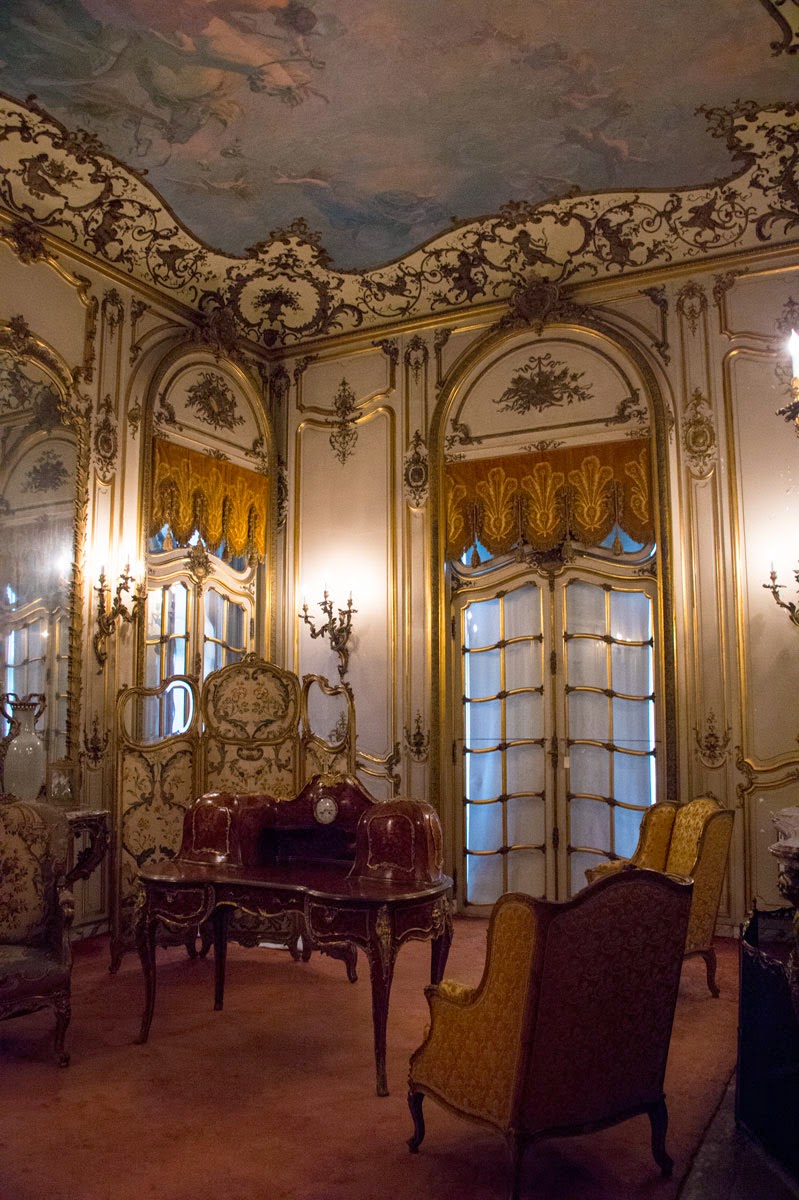 Now THIS is my kind of room ... lots of hand carved wood from Africa ... but women weren't allowed in here.  It's the man cave for business and cigars, while the women were relegated to the French Room for tea. 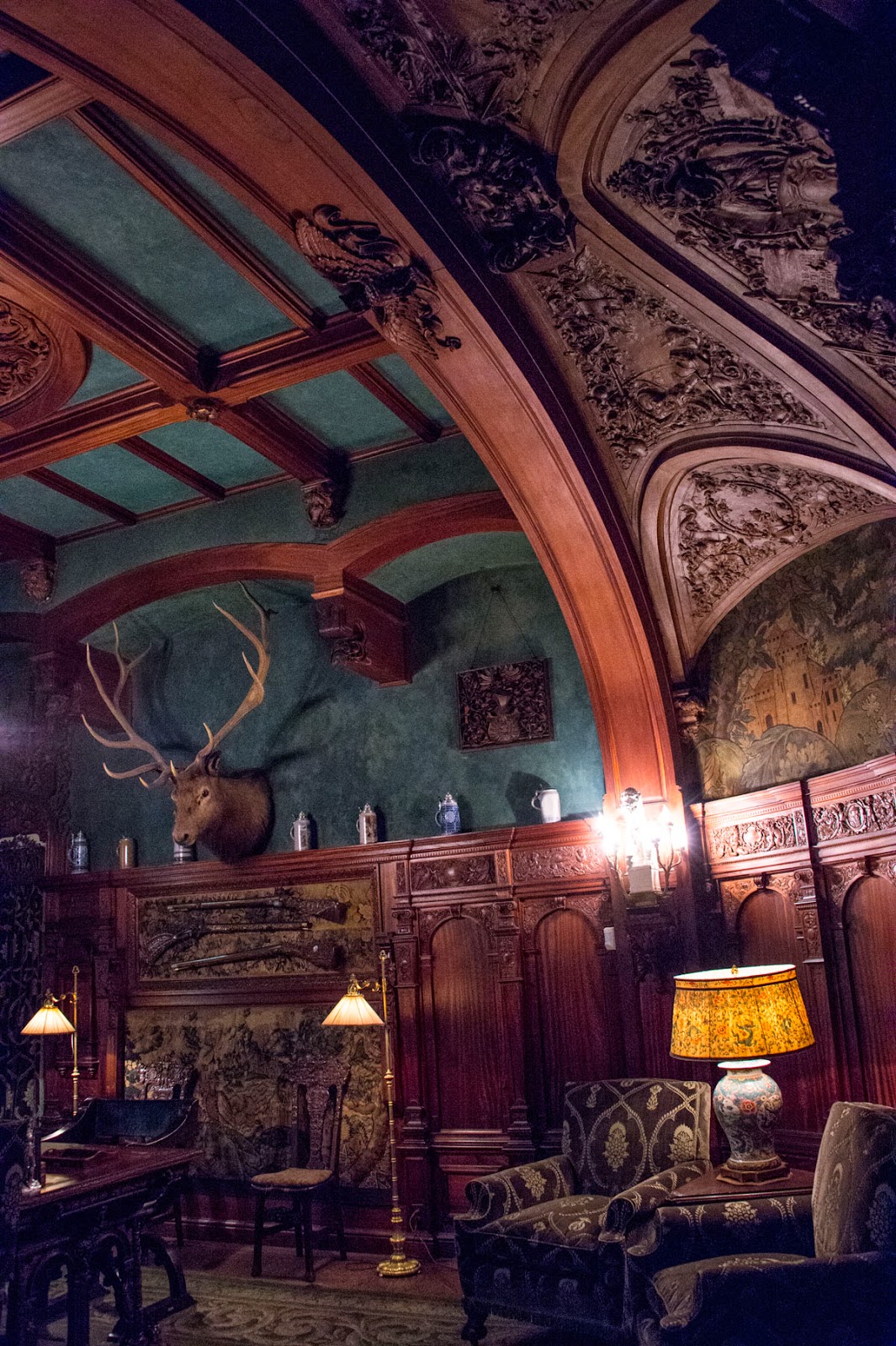 I have to admit there were so many rooms I've forgotten what was what.  I think this was the living room - sitting area, with several fireplaces and spectacular persian rugs.  This one would probably cover half my house!! 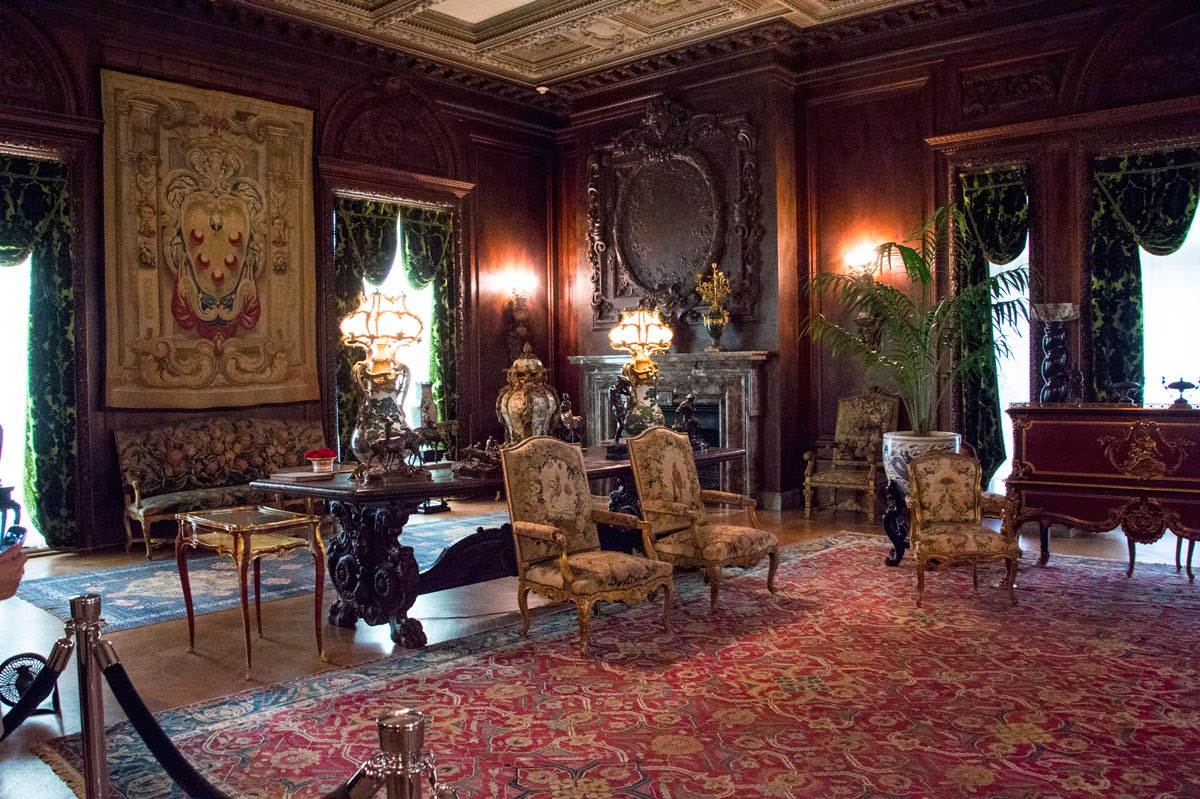 The dining room was under repair, also sporting many fireplaces.  Although there is a lot of carved marble, most of the decorations on the walls in rooms without wood paneling are made of poured concrete, something you just don't see any more.  If you were invited to dinner, you would eat in this huge room ... but for breakfast, you had to ask for room service.  Personally, I don't see a problem with that!!  There were only seats for 16 guests, a total of 18 at the table.  Extra people were NOT invited.  Frederick was a rather private person and apparently didn't like crowds. 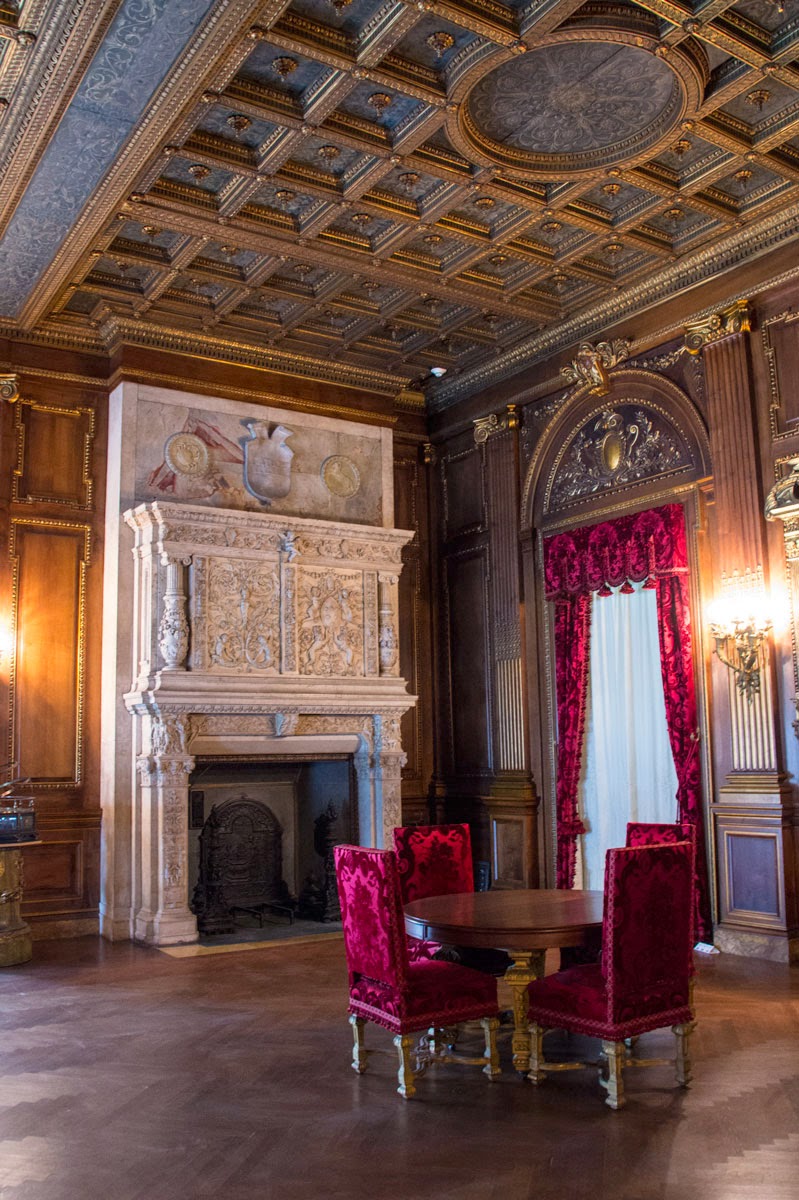 Although the Vanderbilts had a dam built across the stream on their property for hydro electric power, many of the rooms were dark, even with the lights on, so photography was a challenge with brightly lit windows.  There is only one light switch in the power house that the manager turned on in the morning and turned off late at night.  When you're making your own electricity, who cares what the light bill is!!  This is Louise's dressing room, complete with huge closets. 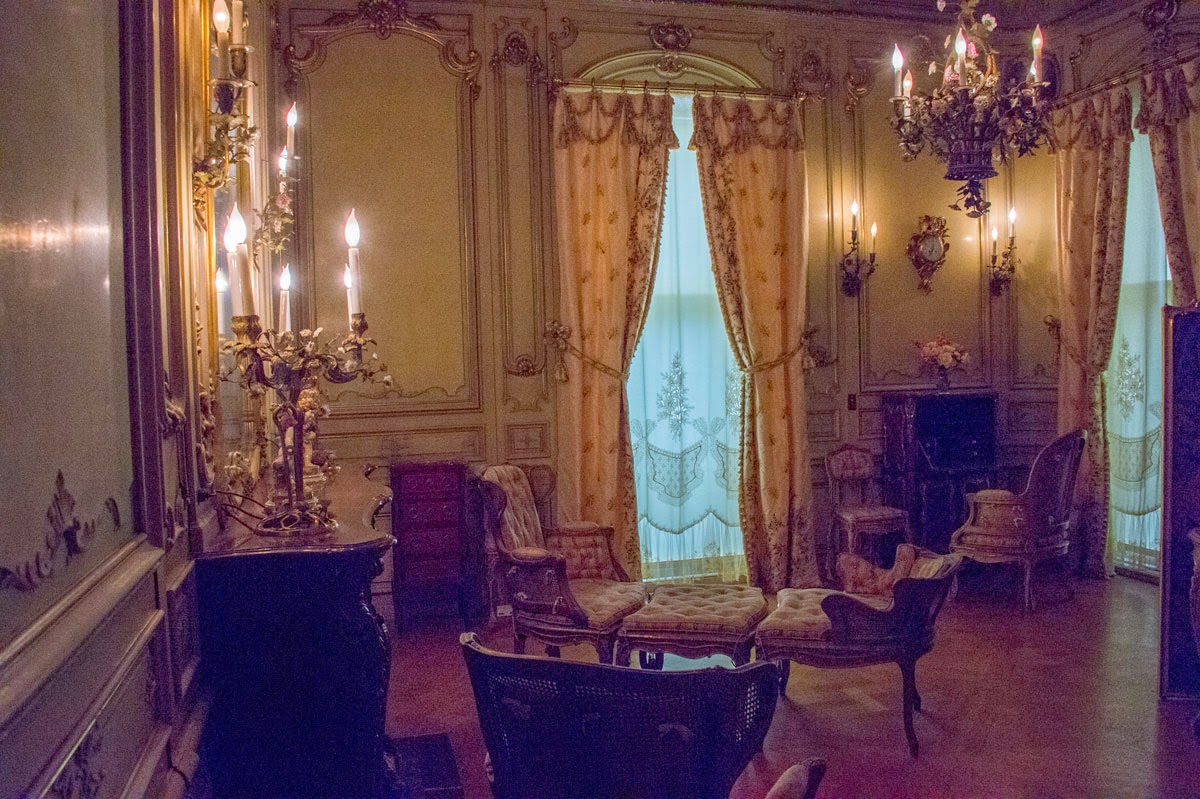 These paintings are over the door between Louise's dressing room and bedroom.  Yes, the gold here is real too.  I'd sure hate to clean all this "stuff" ... but at least the Vanderbilts paid their help well. 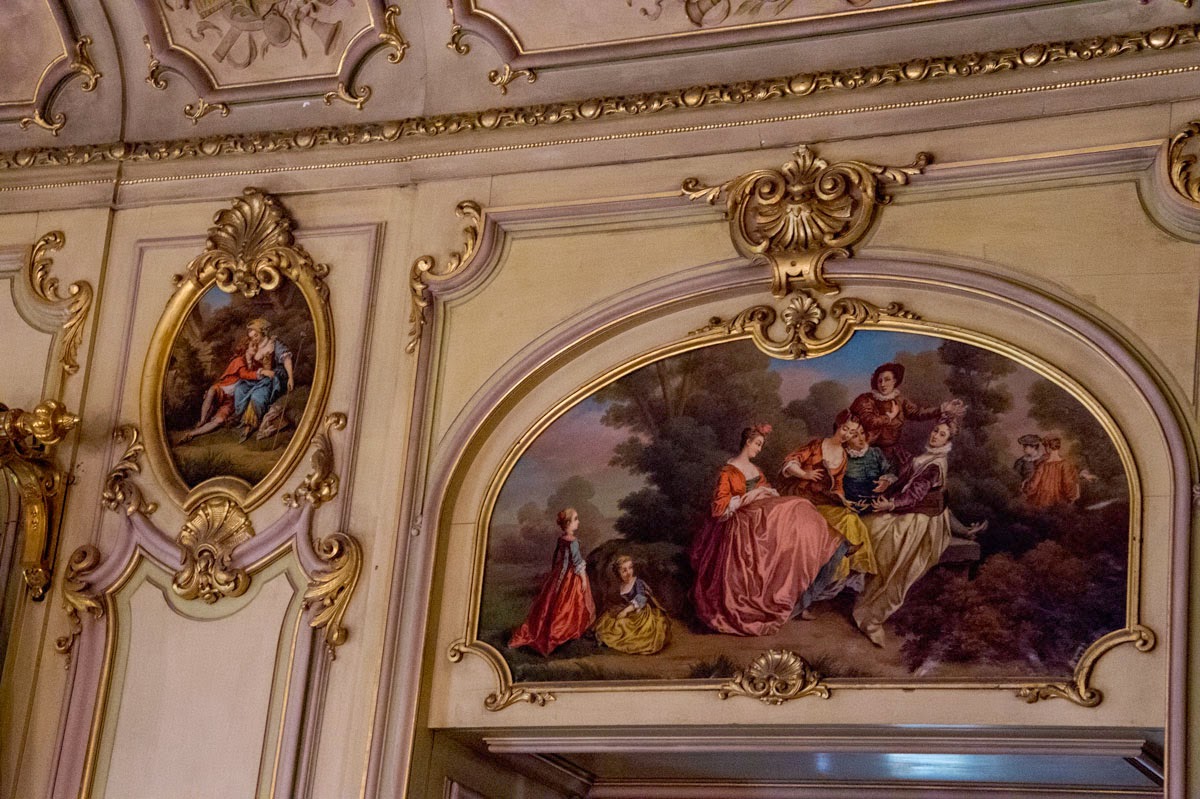 This is Louise's bedroom ... with her bed rail around the foot and sides of the bed.  Since they didn't really get up early in the morning, business was sometimes conducted from bed.  This rail kept the people at arms length.  Gosh, I think that early morning bedhead look would scare all the people away!! 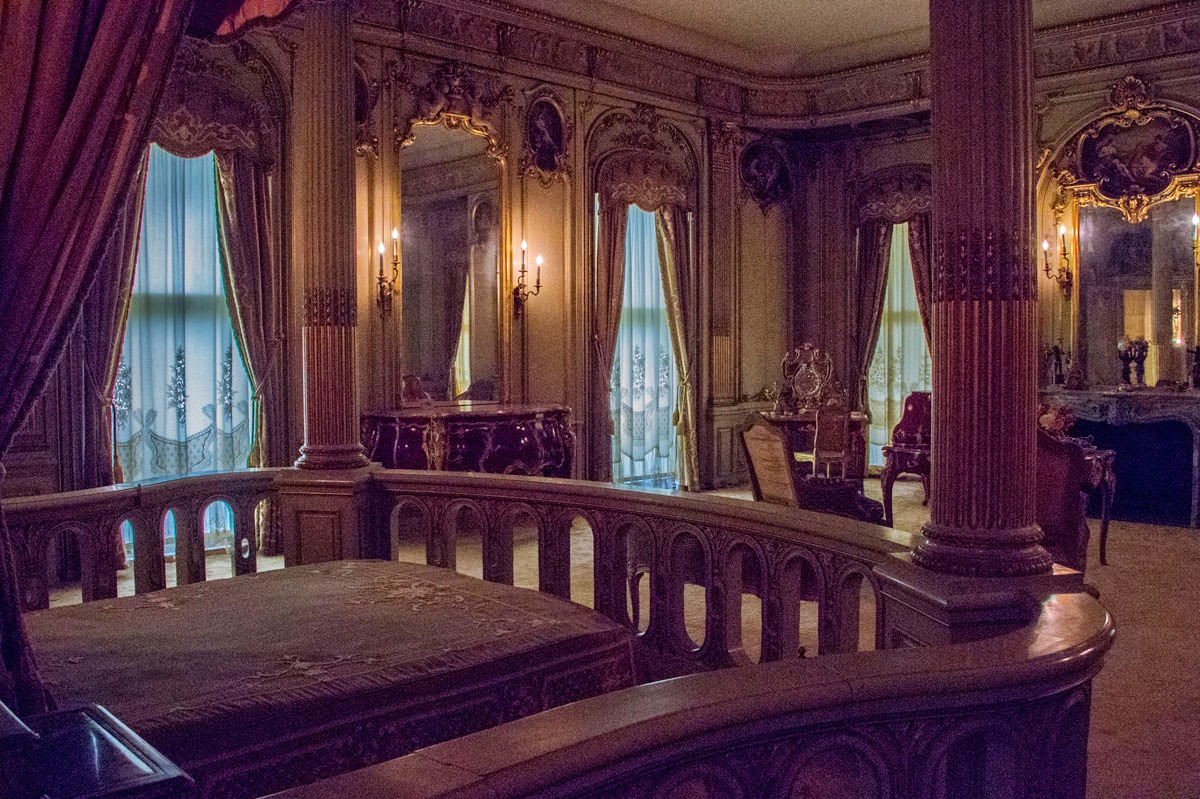 Frederick's bedroom was even more spectacular and has two large doors that open between his and his wife's bedroom.  Interestingly, there are locks on the doors ... on HER side only. 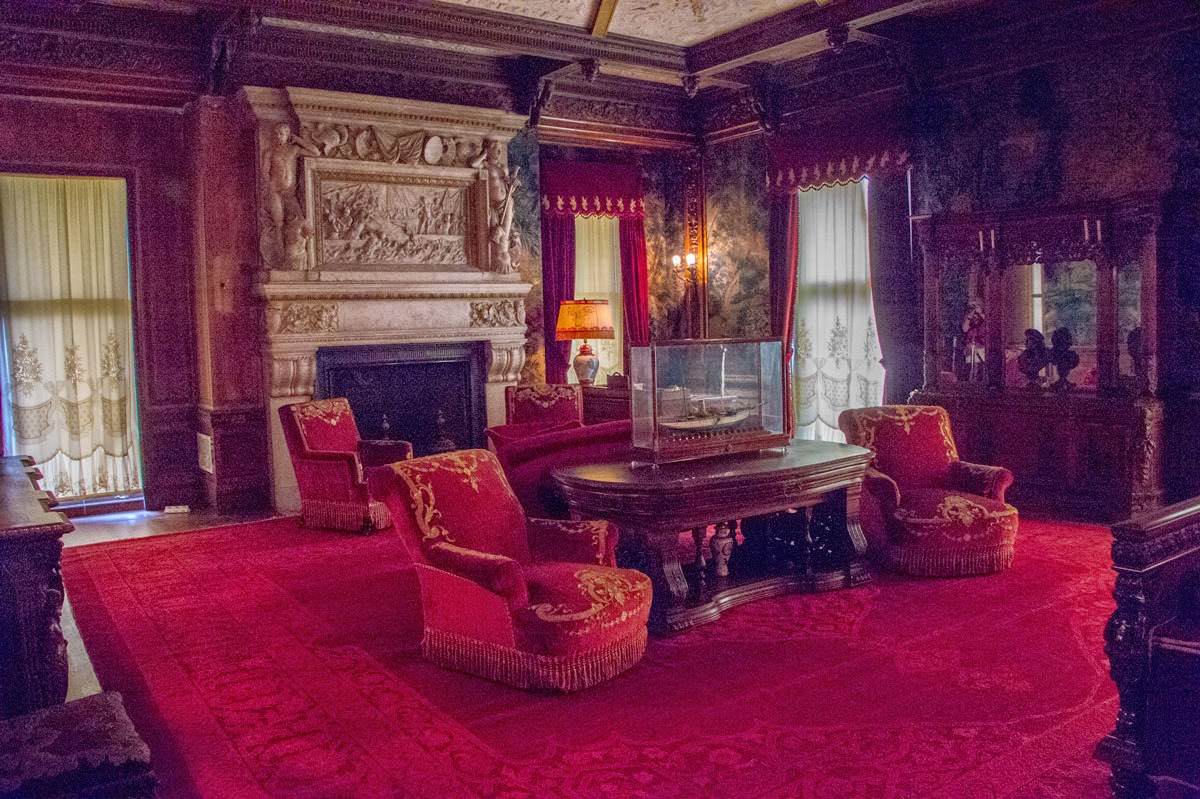 One of the amazing things is that this building was built before backhoes and tractors ... by hand ... two stories under ground.  The basement held the kitchen where meals were prepared and sent upstairs on the dumbwaiter to the dining room 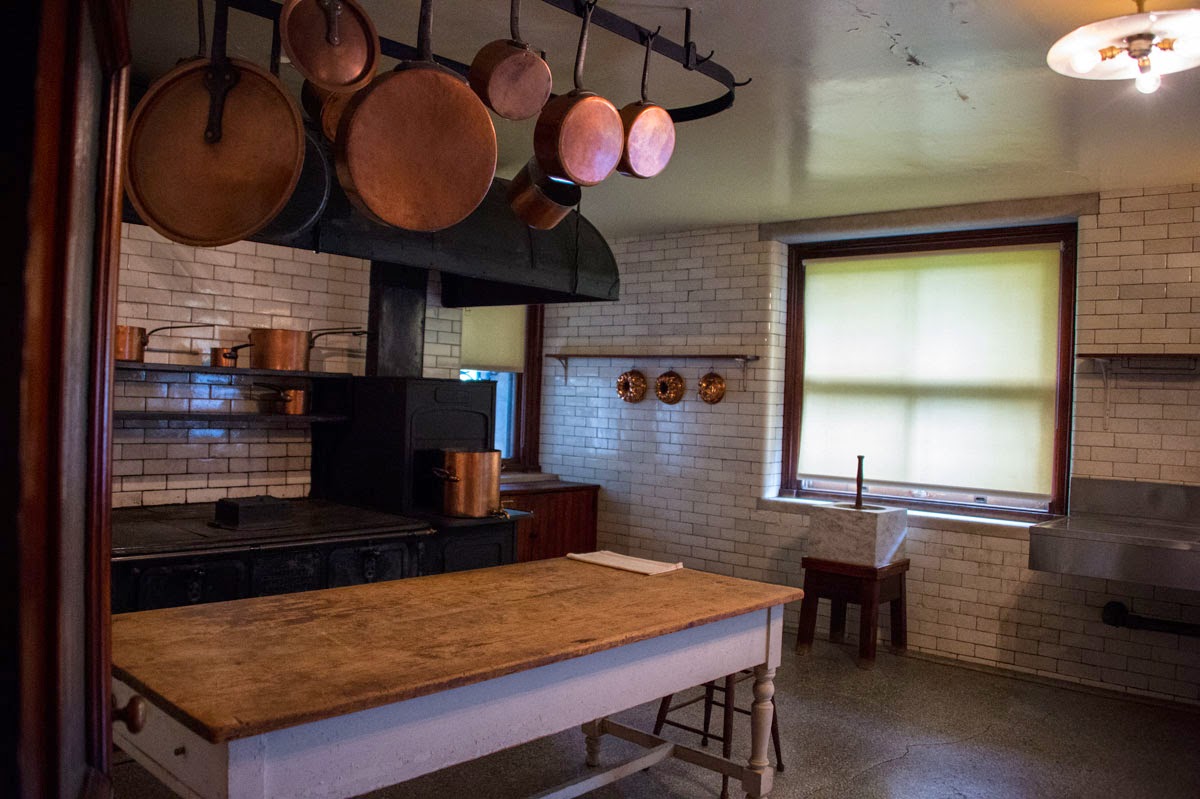 This was where the servants spent most of their time.  There's a laundry room for sheets and linens.  The clothes were sent out to be laundered.  There's a large ice box, meat preparation room and even a kind of clothes dryer.  File cabinets come out of the wall, wet sheets are laid over the racks and shoved back in the wall.  A stove in the room is fired up to force hot air into the wall, drying the linens.  Ladies who came to visit, brought large trunks like you see here, full of their 5 changes of clothes (daily changes that is), along with a servant to dress them.  Those servants stayed on the very top floor.  One thing Louise and Frederick loved was fresh flowers from their garden, which would be arranged here and placed around the house, as well as taken across the street to the church. 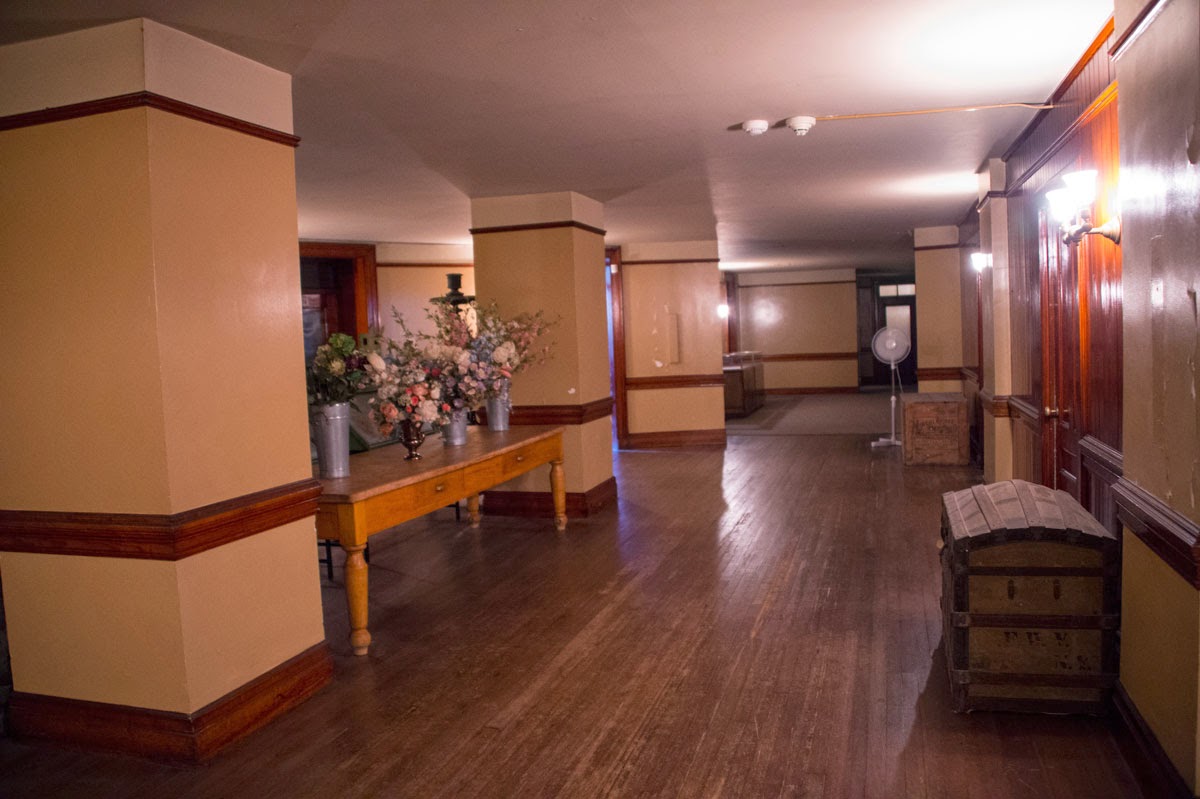 Frederick loved horticulture and hired architects to create these huge gardens.  Large greenhouses were also located here, now gone.  To the left are two small houses ... one for garden tools and one for the gardener. 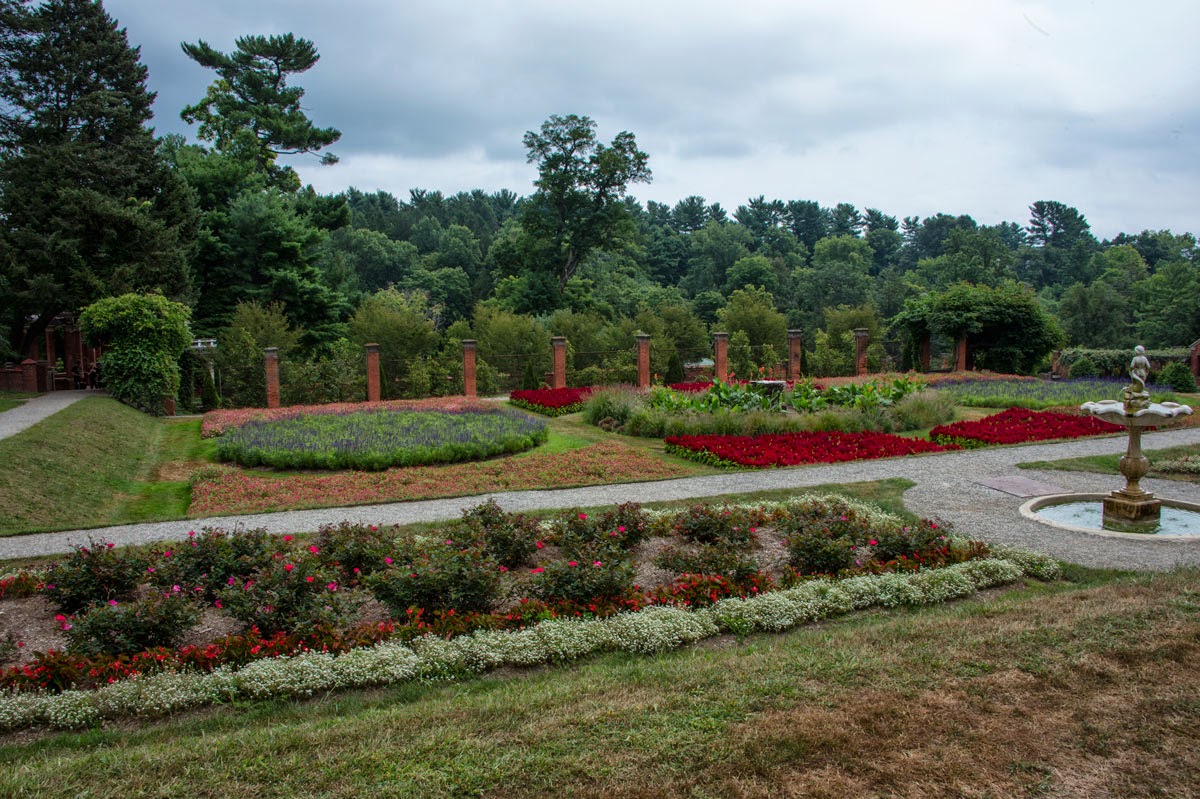 It was so hot and muggy, it was all I could do NOT to jump in this pond.  The arbor is covered with grapevines.  Frederick wanted people to be outdoors, so it was quite a walk from the house to the garden area, where his guests would be required to follow the paths, admiring the flowers. 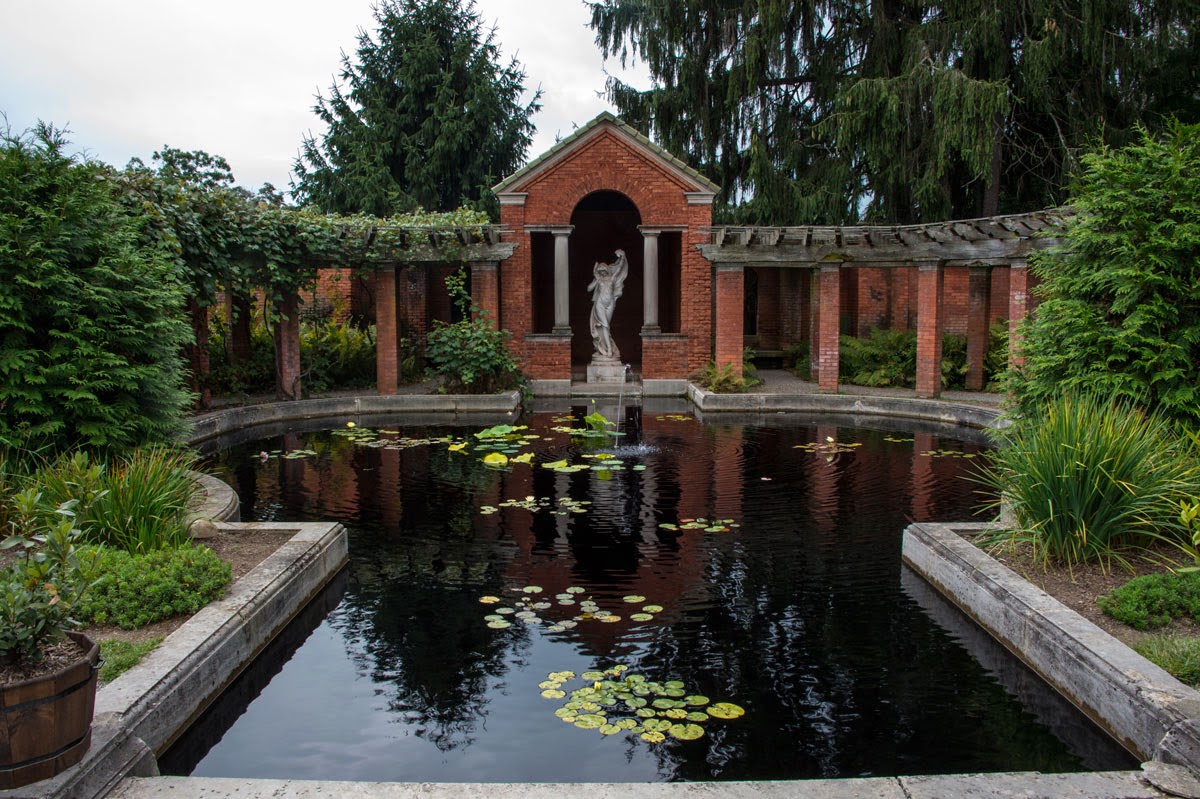 On the third and bottom layer of the garden was this building at the end of the rose garden, where Japanese tea would be served.  Several hours later, they would to return to the house. 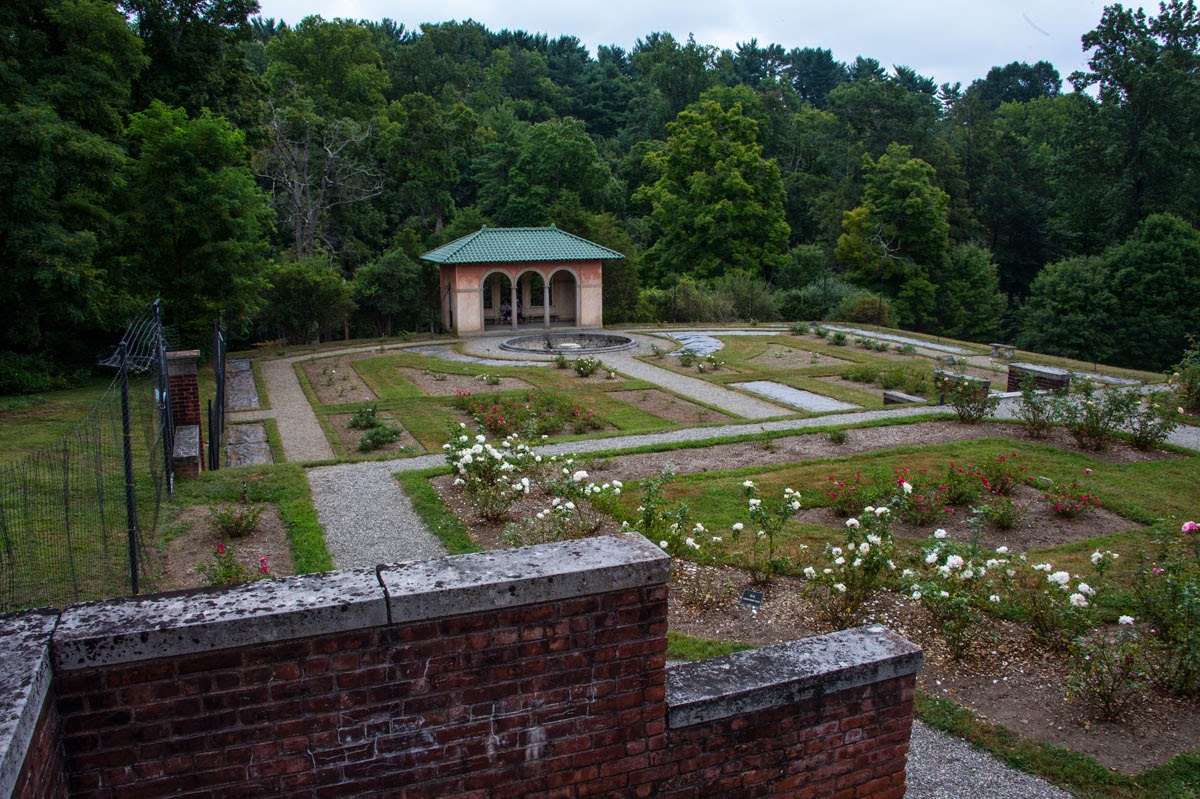 You can't live in the country without horses, so Frederick built this coach house to keep them out of the weather.  Boy I wish I had THIS barn!!!  We couldn't get inside as the park service has it full to the brim with maintenance stuff.  I'm definitely sure I could live HERE ... snow and all!!  I'd even help my maid clean the house!!  That gives me an idea .... I have an extra room ... maybe I could hire a full time maid for MY house??  Hahahahaha 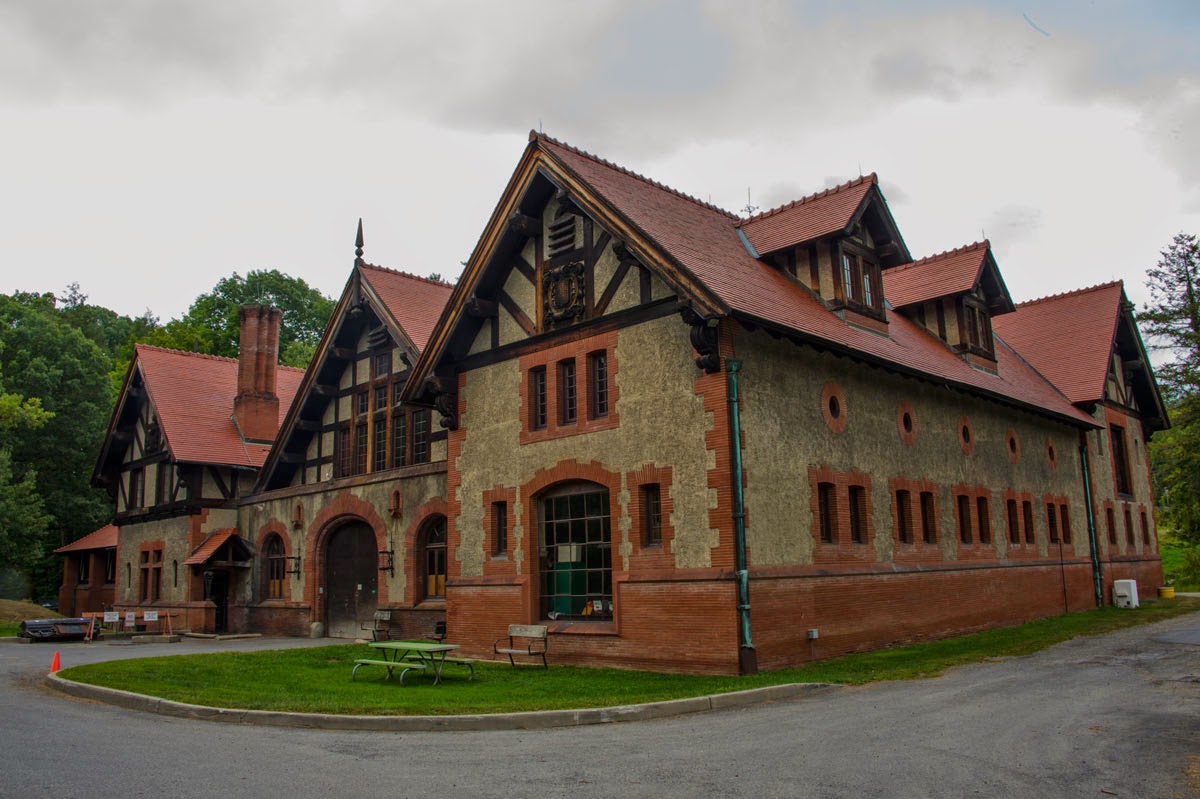 And of course since the Vanderbilts owned all the railroads, they had their very own railroad station at the bottom of the hill next to the Hudson River, with four sets of tracks.  A siding, now gone, took visitors directly to the house.  Only two sets of tracks remain for about 20 Amtrak trains that pass by here daily and the station is closed, but remains a small museum. 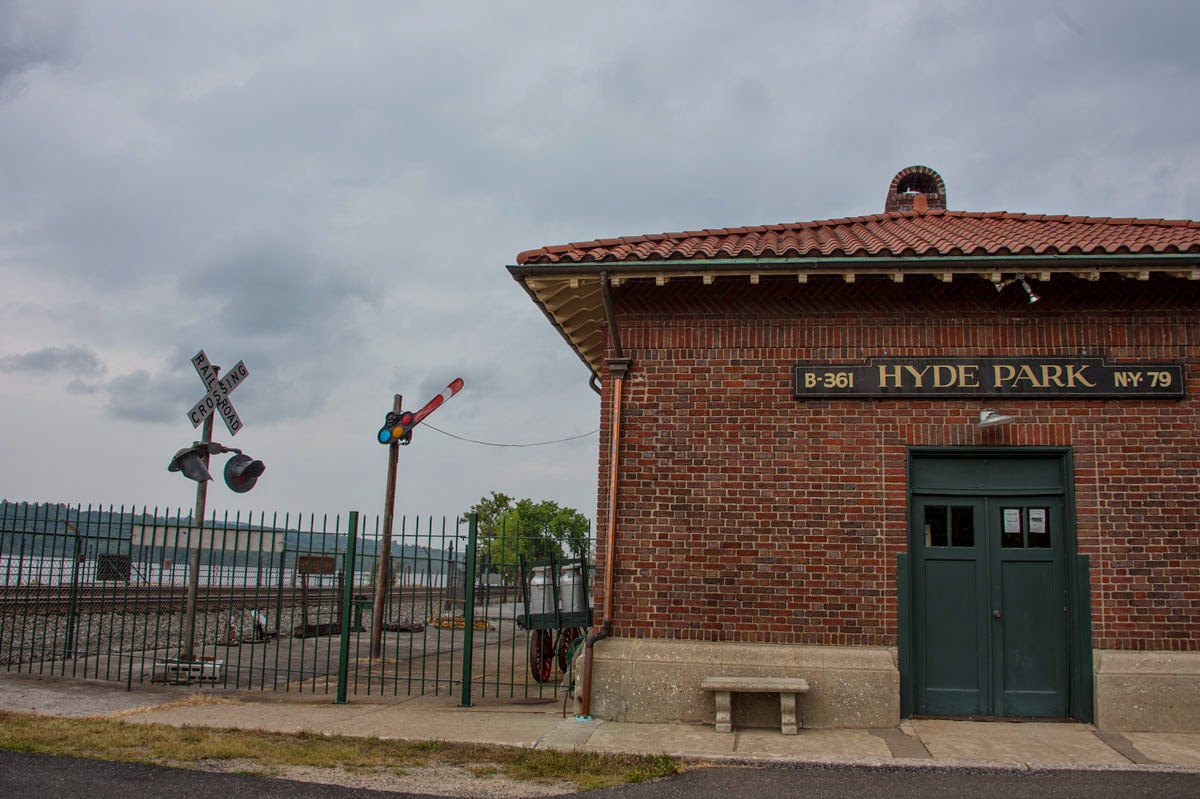 We stopped at Eleanor Roosevelt's Val Kill (meaning Valley Stream) on the way back to the rigs before having dinner at Clancey's, but that will have to wait for tomorrow's blog.  Today we take off for parts unknown .. to me anyway .. heading towards Gettysburg.  I know, it's Monday ... and the last holiday weekend DAY before school starts here.  We expect traffic to be outrageous and promise to go slow!  Wish us luck on the trip ... we're hoping 5 hours doesn't turn into 8!!!