There have been some big storms cruising through California this last few days and they have resulted in the opening of Dodge Ridge Ski Area ... one of my favorites.  Being a long time season ticket holder here, I was VERY happy to see it open BEFORE Christmas.  This privately owned resort doesn't usually open until the following year due to the shortage of snow.  I must say, there was no shortage yesterday!!!

My ski buddy Peter Treso and his daughter Loren, called to say they were ready to hit the slopes.  Despite the pouring rain here we took off early yesterday morning, hoping it was cold enough to snow in the Sierra Nevada mountains.   We just started to see snow at Long Barn and by the time we got to Pinecrest, we were wondering where all the snow plows were!!  With no waiting in line, we had our passes and were on the slopes in minutes.  So much nice powder ... my skis stuck to the snow like glue ... I wasn't going anywhere.  With no notice, I hadn't had time to get wax put on the bottoms ... a quick trip to the repair shop, $15 and 15 minutes had me back out on the slopes just sliding along nicely!!! 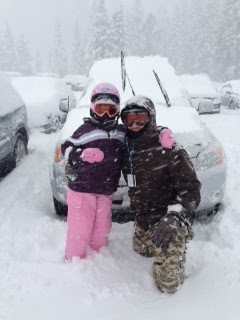 The good part about it snowing a LOT is that most people stay home and we have the place to ourselves.  We were not disappointed!!!  Within an hour however, whiteout conditions persisted.  We could barely see the lift chair in front of us, let alone anyone laying on the slopes ... and there were lots of those obstacles!!!  Better to hit the road for home ... it's snowing more and more ... and we DO want to be able to get out.  Good thing we left when we did.  Peter's car DOES have 4-wheel drive, but it wasn't helping.  45 minutes of tough digging on our hands and knees, and Peter pushing while I drove, FINALLY resulted in us getting out of the parking lot.  Poor Loren thought we were going to spend the night!!!  Still no snow plows in sight, we headed rather blindly down the road.  Not much visibility here!! 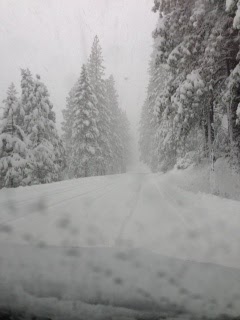 Two years ago, we were driving down this same hill when someone hit the brakes, resulting in a 3 car pileup ... thankfully we were able to stop in time because Peter was driving slowly.  On THIS road this day, he was also driving very slowly and carefully.  Of course the big macho guy in his macho truck wasn't happy with that at all.  No Brains was trying to show off to his girlfriend and the rest of the cars following us.  He passed us on the left when we stopped at a stop sign.  Dummy had no weight in the back of his truck, gunned it too hard, turned it too hard and slid right off the side of the road down the slope into a tree.  We laughed and waved as we went by him headed down the road.  Guess he made a great impression on his girlfriend!!!  Wish I could have gotten a picture!!!

Finally we came up behind a grader plowing the road.  By this time there was at least 6 inches of snow in the road.  Nice guy that he was, he pulled over for traffic since he was barely going 5 mph ... letting us all slug through the deep snow!! 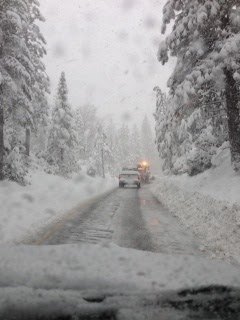 Further down at Sierra Village, the State snow plows were hitting the roads hard, making driving much easier and a little faster.  The snow let up a little so visibility got better. 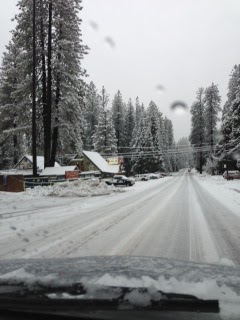 Almost down the hill at Confidence, there is still lots of snow.  There was NONE here when we came though 5 hours earlier. 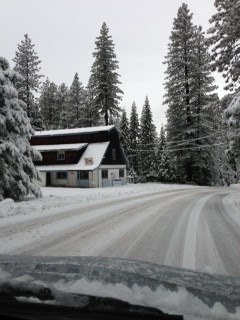 At the lower end of Twain Harte, the snow finally turned into rain.  A great day of skiing with best friends and lots of snow adventures.
Posted by Nancy Kissack at 9:08 AM