Since I'm going horse camping at Clarks Fork in the Sierras, and you have seen the images of my RV rig, I thought I should show you my "horse" rig.  I have an aluminum fifth wheel three horse slant load Four Star trailer with tack room/bedroom (that's a mouthful!!).  It's much easier on horses to travel long distances at an angle than straight on, thus the "slant load".  Once each is loaded, a panel slides over to help give them stability.  Each has a feeder and a large window!!!  (They're not spoiled ... much!)  I only haul two at a time, leaving the third stall for hauling hay and grain. 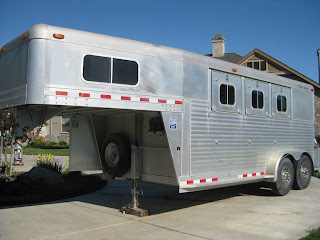 The entrance to the tack room is on the opposite side.  Behind the door is a large screen door. 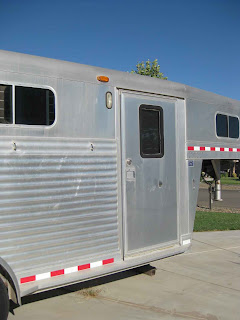 The fifth wheel overhang is a queen sized bed.  Especially nice for horse camping.  I don't have to worry about bears!!!! 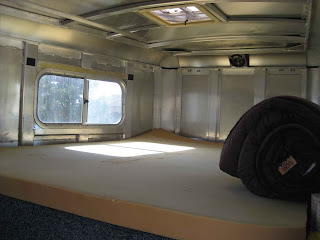 The trailer is rigged with lights everywhere, even outside, run on a battery.   If you arrive late, floodlights illuminate everything so you can safety unload the horses. 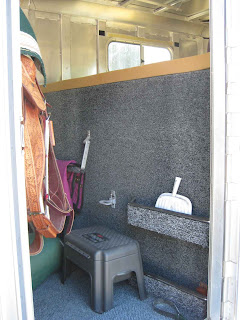 It has a large wall with hooks for hanging all kinds of horse gear and three pull-out saddle racks.  I ride two saddles, one for show and one for general work.  There is room enough for a small wardrobe, a clothes rack and plenty of room to move around and change clothes.  Both the red box and the gray step stool hold medical supplies for the horses.  The saddle racks swing around until they are outside the trailer for easy access when saddling. 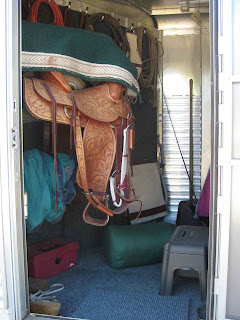 In the back, the door for the horses to enter is the large one on the right.  The one on the left is for storage, but becomes my shower room when camped.  Solar showers work great and are a welcome luxury. 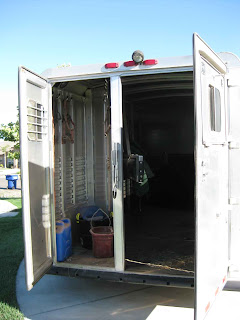 It's an awesome trailer that I have had for about 16 years.  It has been from northern Idaho to the Mexican border and is still in great shape.  Horse camping is great fun ... my horses have always been a big part of my life.  Haven't taken them out in this for some time, but plans are in the making!!!
Posted by Nancy Kissack at 6:15 PM