I picked up Peter and his daughter Lauren at the airport so they could stay a few days with me.  As you can imagine, we spent most of yesterday at the pool and beach.  We thought a whale watching cruise would be fun for Lauren, so off we went. 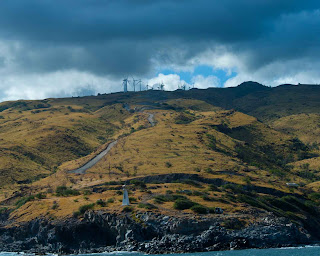 A naturalist accompanied the boat and told us of interesting points along the way.  At the bottom, very small, is a lighthouse.  At the top of the mountain are 20 windmills ... an experiment conducted by the island of Maui.  No idea if it works or not, but they do have breezes across the island most of the time.  Haven't seen them anywhere else. 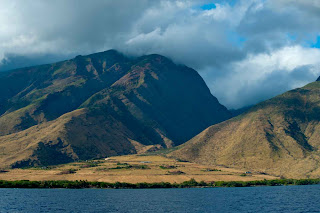 This shot shows the volcano that created this part of the island.  You can see the alluvial fan created from erosion.  Out in the ocean, it was dead calm and really hot.  For the most part, the Captain keep the boat underway looking for whales ... which of course have all left for Alaska!  They did put a hydrophone under water and we heard some of the singers ... they are the last to leave the area. 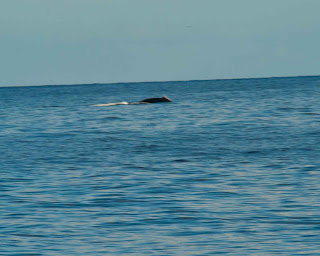 Finally, we saw a couple of water spouts and this whale as it was diving.  You think this is far away, you should have seen the picture before I cropped it!  LOL  It took me so long to find the thing in my viewer that the camera barely had time to focus before it was gone.  It was at this point that some jerk on board the boat bumped into me twice, like trying to see, and stole my wallet, which was in a zipped pocket of a small purse with a long strap around my neck.  Wish I had noticed cuz I would have knocked him in the water.  Thank goodness I had put my drivers license in another pocket and had NOT gone to the bank yet.  He only got $60 cash.  I reported it to the boat, but they really weren't concerned.    For those who know my temper ............ 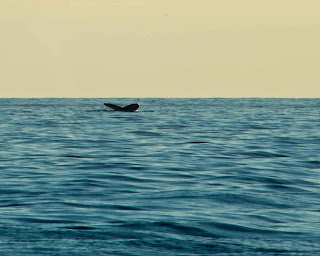 Almost back to the dock, I saw another spout behind us  and had a little more time to shoot.  Again, this guy is probably a mile away, and even with my biggest telephoto lens and cropping, this is the best I could get.  I don't see any more whale watching in my future!!!
Posted by Nancy Kissack at 2:00 PM