How many times have I complained about not having a handyman around?  WAY too many.  I'm tired of hearing that myself.  So instead of fighting it, I'm joining them and becoming one.  Handyman Nancy at your service.

But first, how much would you spend for a good night's sleep?  I won't tell you about myself because my wallet is still crying big crocodile tears.  The bed I bought two years ago wasn't cheap by any means, but the mattress was.  In less than two months, it started to slump in the middle.  I turned it around several times, but it didn't help.

Since I need a bed for the guest room, Miss Patty and I trotted off to Green Valley to find a suitable Stearns and Foster.  If you think THOSE are expensive, you should check out Tempur-Pedic.  Guess which bedroom gets the OLD bed.

I've always had trouble sleeping ... nightmares and all that nonsense, not to mention aching hips.  I wake up many times a night.  So I pulled the trigger and bought one with the help of Mrs. Chance saying it's probably the last one I'll ever buy.  I'll let you know how that works out when it's delivered in a week!!

On to Handyman Nancy!!  I have recently seen the combination locks that replace your old fashioned "key" locks.  Always having my hands full going to and from the rig, why not give those a try and see if it's more convenient. 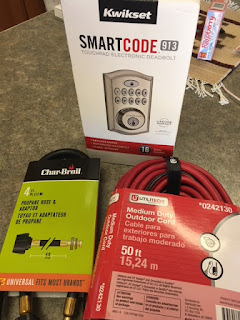 First up, remove the deadbolt.  Easy peasy with my trusty phillips screwdriver. 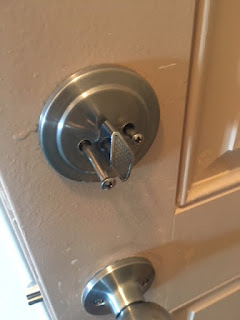 Second, watch a demonstration on You-Tube.  How easy was THAT!!  Once the entire thing was installed, the directions said to TEST the keys to be sure it was working.  Yes, there are keys, just in case the batteries go dead while you are out quilt material shopping.  Wait ...... there are NO keys.  Are you kidding me?  I removed the entire thing, smashed it in the box and hitchhiked a ride with Mr. Chance to Lowes, a good 30 minutes away.

With a new box in hand, one that had NOT been opened, I returned to begin the job all over again.  Note to the handyman ... never EVER buy anything in a box that is already open. 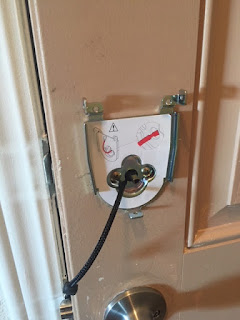 Once installed, turn the lock.  It didn't work.  I never said I was a GOOD handyman!  THIS was my problem.  The hole wasn't large enough.  I tried to remove this so I could buy another, but wasn't I surprised to find it was screwed in UNDER the door jam. 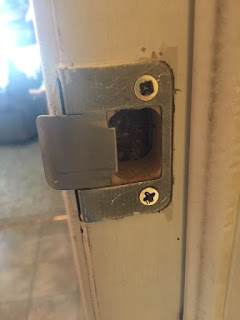 I can't believe I figured this out all by myself!!  I installed the batteries and proceeded to read the instructions on how to program it.  With the front door unlocked (just in case) and the keys in my hand (just in case number 2), I hit the buttons.  Wasn't I surprised that it WORKED!!!  I'm so excited!!!  I can't believe I did it!

The other cool thing is that you can tell if it's locked by the blinking red light on the back.  If it's green, the door is NOT locked.  Just as an added measure of security, I programmed in not one, but TWO codes, you know, just in case I forget one. 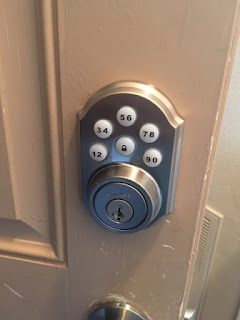 So there you go ..... you need a Handyman, just call me.  Unfortunately, my skills are limited, but I could use the extra money to pay for that bed!!!