The Farmers Market and The Punchbowl

I was up bright and early yesterday, headed to the Farmers Market for some veggies.  Obviously they sell more than just vegetables!!  The best so far is the big sugar cookie ... actually TWO of them with yummy lemon frosting sandwiched between.  I actually do TRY to be kinda good ... I always cut these things up into fours.  Otherwise I'd eat the whole thing in one sitting! 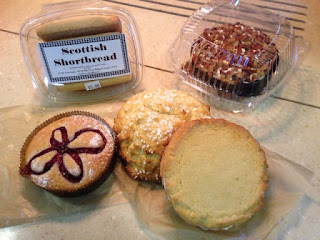 I got some green beans, squash and delicious sweet tomatoes.  The roasted tomatoe salsa is one of my favorites, but you have to get there early.  They make a limited number of containers and they sell fast.   The packages in back are dried soups and stroganoff that you just add water to.  I think I can handle that!! 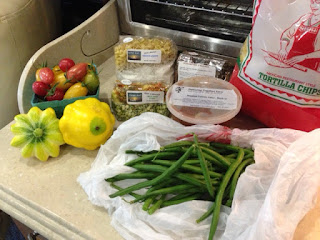 Eat the salsa with La Cocina de Josefina tortilla chips, the crispiest, tastiest chips I've ever had, not overloaded with salt.  Try it ... I know you'll love it!! 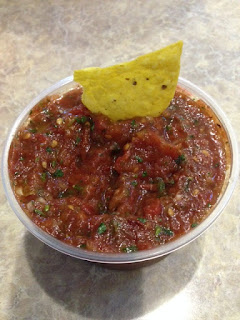 Add to the above a fresh loaf of whole grain sourdough bread, perfect for grilled cheese sandwiches. 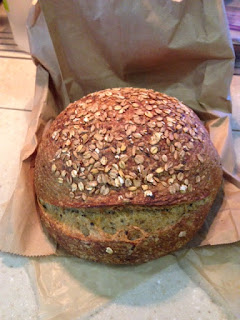 With my kitchen stocked for the week, I went looking for some adventure.  Drive North from Newport and you will find Cape Foulweather which faces North on the headland and a lookout that faces South.  This is the spectacular view of Devil's Punchbowl and Agate Beach beyond.  It's also a good spot for whale watching. 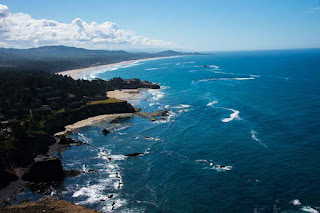 Turn down 2nd street and drive to the end for parking.  Here's the punch bowl ... it's big, that's for sure with two large arches that let water in during high tide.  I just wanted to know how to get down to the bottom quickly, as the tide was coming in pretty fast!! 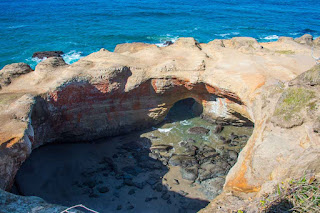 Go back up 2nd Street, turn left on C Street and continue until you see a parking lot on the left, just before 3rd.  Continue on foot North on C Street where you will find a sign designating beach access.  It's pretty hidden, making for few people on the beach. 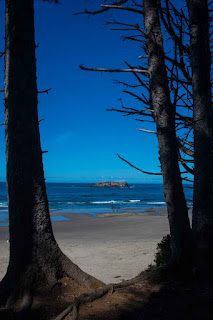 Being it's a holiday weekend, the Darwin Award nominees were out, like this one who climbed the sandstone rock.  What he didn't realize is that it's just compacted sand, which broke off when he put any weight on it.  He admitted he made a BIG mistake as he eventually crashed to the ground. 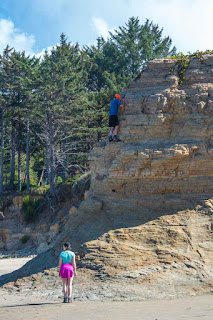 This is the entrance to the bowl, going right through a big tidal zone.  Watch where you place your feet so as not to kill the creatures living there ... or yourself, as the rocks are very slippery!! 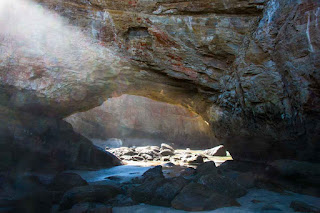 It's kind of spooky inside as you listen to the ocean crashing on the rocks outside.  The orange coloring is algae, dried and peeling off. 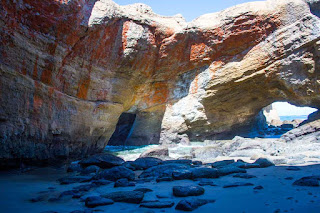 Okay, I've had enough.  Even being a Dive Instructor wouldn't help me if I got trapped in here by the tide.  Or maybe that knowledge is what motivates me to get the heck out of this hole before the water level gets too high!! 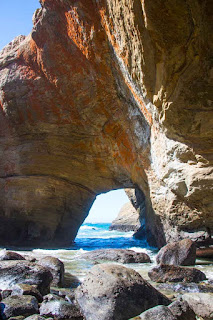 Space is at a premium for these anemone as they blanketed the walls of the rocks about waist high, giving you an idea of the water level.  Looks like these two varieties don't co-mingle either!!  There were literally millions clinging to the side. 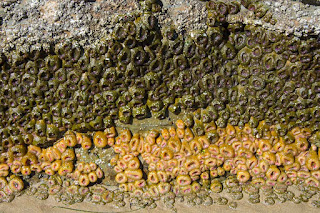 This shot is for Miss Patty Chance ... these opihi are edible, at least by some folks.  While we were on Maui, some strange guy asked her if she smoked wacky tobaccy.  When she said no, he offered her a raw opihi like these, which she scarfed down.  Yuck!!! 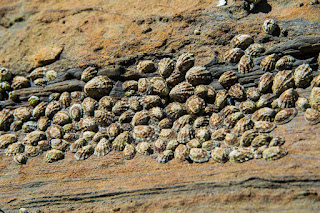 A little further down the road I pulled in at a viewpoint to find more whales cruising down the coastline.  These grey whales are just enormous and it's fun to try and be the first to see the spouting water. 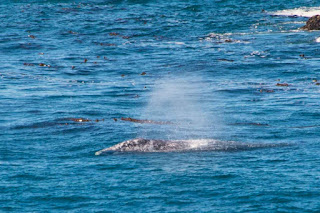 They seem to spend most of their time lounging around the reefs just off shore.  I've never seen so many in one place!! 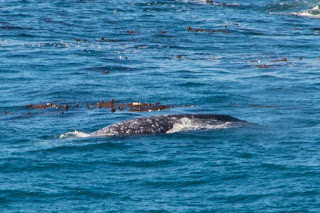 Another big rain storm just went through and it's supposed to be overcast all day.  I get cabin fever pretty quickly, but hope I can hold out until late this afternoon when the winds will pick up and I can try kite flying again.

This side of the campground actually hasn't been too noisy this time around, or maybe I just can't hear over the TV.  I walked the entire park late yesterday, to find only one available space.  There were many open truck doors with radios blasting, several outside televisions going full blast and lots of screaming kids ... all on the South side.  Remind me to NEVER park over there!!