Morning On The Bay!!

I have to say it’s been pretty traumatic not having internet or phone service this time around.  I’m not sure if it’s the tower, the storms or the earth movement.  I really start to feel cut off from the world!!  I’ve even taken to watching the evening news on the local chanels, which I never do!!

This morning was no different, since I had to hang around the RV park and move my rig from one spot to another.  Seems someone special reserved the site I was in, so I moved to another directly behind  … also a pull through.  I apologize for being so late with the blog! 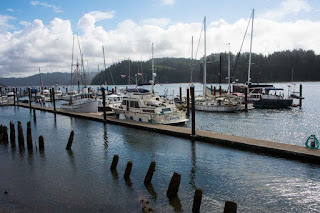 Once done with yesterday’s blog, I strolled down Old Town Florence to discover one of the best vegetable stands EVER is open every day of the week, not just for Farmers Market.  They have the sweetest tomatoes and white peaches I’ve had in my life, so I stocked up for the week. 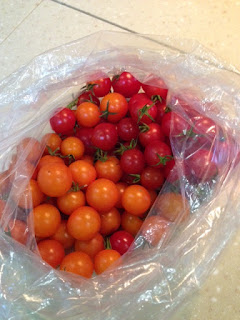 I walked down on the docks and took a few pictures, while watching some people fishing pull up an empty crab pot. I teetered perilously on the dock, hanging on with my toes as the fishermen in boats raced by making waves two feet high!!  Ride ‘em cowboy!!  That was a real balancing act!! 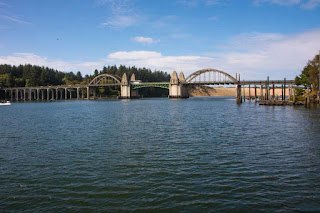 There are a couple of new stores that I wandered through until I found this great picture!!  It’s not for the rig, but my seashore bathroom at home.  Then I hit Kitchen Klutter and showed considerable restraint, purchasing only one small spreading knife for dips.  Their pans were all over the top expensive!! 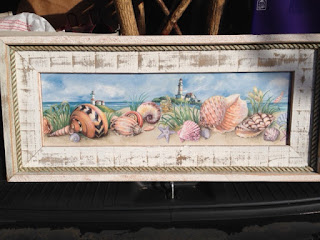 I found my little sandwich/wine shop … Le Bouchon Provisions … and had a delicious pulled pork sandwich on fresh baked homemade sourdough bread.  The salad was some Italian noodle that I suspect had anchovies in it.  There’s no faster way to make me sick than fishy noodle salad … don’t order that one if you come here!!  I did discover however, a gentleman sitting with a cup of coffee using his computer for over an hour.  So that’s where I sit today as I type. 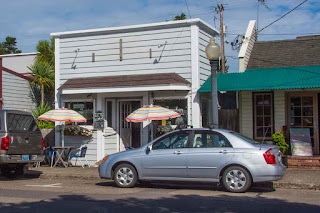 This is only HALF the sandwich ... I ate the rest!! 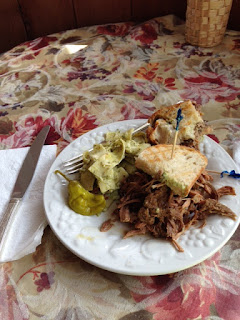 I hope this picture comes out well on the blog.  It's one of my all time favorites.  While standing on the dock on the other side, I noticed a small sandy patch that I thought would make a great shot.  I drove across, parked in the hotel lot and scrambled down through the brambles to a little piece of beach.   I think it came out pretty nice.  I just might have to frame this one!!

I wanted to check out the sandy beaches for wind, so I drove down Rhododendron Street North of the bridge for quite a few miles until I hit the end of the jetty.  There was another of those “secure your valuables” signs, so I didn’t go far from the car.  There were lots of vehicles there and people fishing everywhere … I imagine that’s part of the salmon run … and wall to wall boats just inside the jetty.

Unfortunately it was too windy to kite fly.  Today I’ll drive around the south jetty and see if it’s any better.  With all the storms going through, it may be just a tad too breezy. 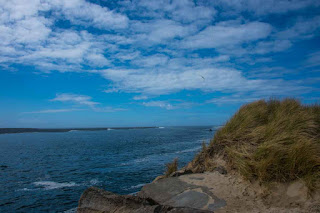 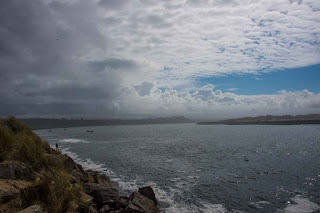 My last stops were at two bead stores.  There are two rather large ones here, so I decided to drop in to see what the deal was.  WOW!!  There were millions of beads, all sizes and shapes, and walls of bits and pieces to put them all together.  I imagine if you know what you are doing, you could make some beautiful jewelry.

All I wanted was to try and recreate some zipper pulls I had seen in most every “gallery”.  Not to say I'm getting old, but sometimes those zippers on my purses and backpacks are just too small to see, let alone grab.  Sure enough, they have all the supplies you need, even some of the same beads, but they are not exactly cheap … inexpensive … you know what I mean. 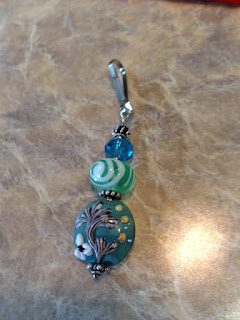 The supplies to make this one cost me $4.05 … but it’s really pretty, right??  I paid $5.00 for the one in the gallery, so I’m saving money!!  Some things however, come in packages of ten.  So now I have to buy MORE beads to use up the findings.  I’m pretty sure that’s a planned strategy on the part of the manufacturer.

I’m off to the South Jetty, hopefully for some kite flying, then to the bead store for 9 more beads!!  By the way, the quiche here at Le Bouchon is delicious with a capital D.  Lucky me, she gave me her secret for a tall luscious pie.  I'll let you know if it works!!