Creatures Of The Deep!!

There's a LOT of pictures here ... you know I went crazy with the shutter button at the Oregon Coast Aquarium in Newport!  Being a diver, I've seen all of these creatures up close and personal, but none would sit still long enough for a photo like they do here at the aquarium. 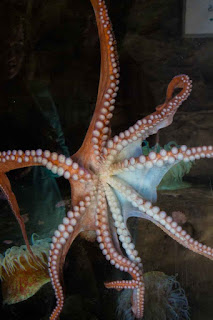 They have three separate sections you can walk through, showing creatures from different areas of the Oregon coast.  This is the Open Sea.  Not only can you see them swim over your head, but under your feet. 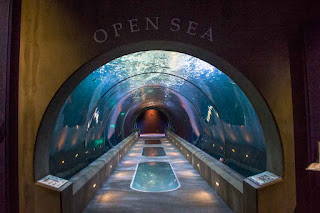 Here's a site I never want to see underwater!  I did swim with white tip sharks at night in Hawaii but it was a feat I don't want to repeat!! 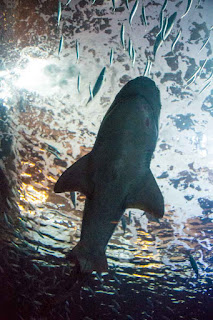 I'm sure this guy has a name, but all the cards located at the entrance were missing in action.  You can take the card with you as you walk through and look at the pictures to figure out the names. 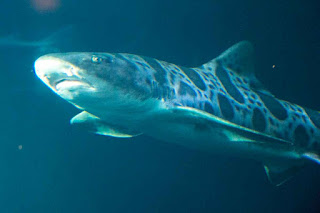 There were lots of stingrays flying up and over the top.  You get to see lots of fish bellies here ... an angle you wouldn't normally get.  Some even lay on the glass, giving you an up close and personal view. 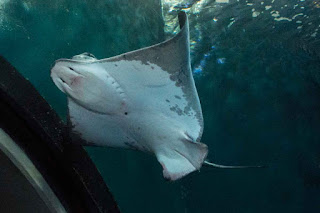 These guys came from the Orford Reef, rockfish I believe.  Course there are LOTS of rockfish .. tiger, vermillion, copper ... but the one on the right is a China Rockfish.  Just goes to prove there are some pretty colors under water! 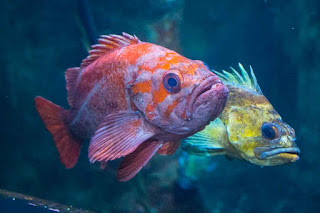 These guys were having breakfast ... they actually don't have many otters on this coastline.  Too bad we can't send a few thousand up from Monterey.  Here's the problem ... sea urchins eat kelp ... otters eat sea urchins and love kelp.  With no otters along this coast, the sea urchins have multiplied by the millions, eating and killing all the kelp, which is why there are no otters here. 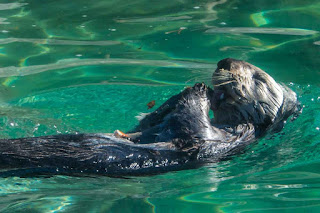 Monterey has almost the opposite problem ... lots of huge kelp forests because the otters are eating all the sea urchins.  Cute little guys ... or I should say BIG guys!  These babies were the size of a labrador dog. 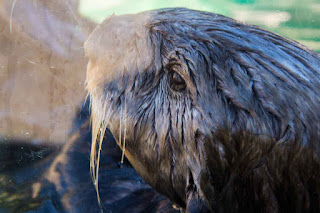 Then I came upon THIS guy!!  I probably spent 45 minutes watching him move around.  Brought in by a fisherman, these octopus only live 3-5 years.  Once the male mates, he dies ... and once the female has babies, she dies.  It's a cruel world underwater!! 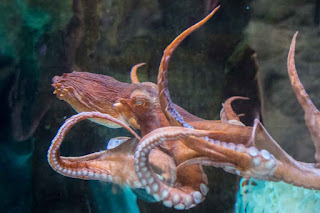 Usually they just sit in the corner, but this guy was active almost the entire time.  I think breakfast was being prepared in the kitchen above and he was hungry!! 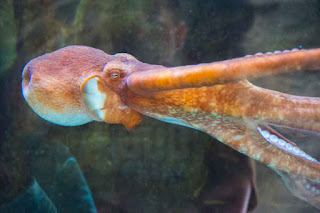 Here's a little known fact about octopus.  See the dark slit in this guys eye?  No matter how they move, upside down or sideways, that slit remains horizontal. 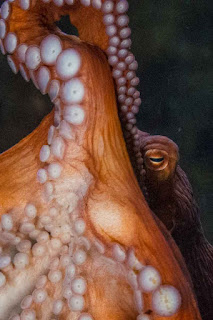 To keep him in the tank, they have placed fake grass around the edge of the enclosure.  When he reaches up with his tentacles, he can't grip the grass and therefore can't escape by lifting himself up.  Terrific escape artists, they can crawl in any hole big enough for their beak to go through.  Hard to imagine this guy can squeeze through a two inch hole. 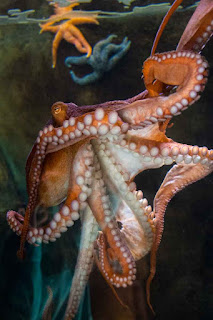 They can also change colors dramatically, which helps them hide from predators like sharks.  This is a bad picture due to the scratched glass, but you can see how amazing the color change is, and it's instant!! 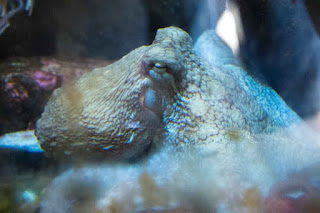 The sand on the bottom is brown and white ... so he changes color as he moves to the bottom.  I think there were about 200 photos of this guy on my camera card!!  They are just fascinating!! 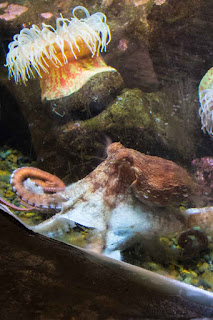 I finally pried myself away from the octopus to head indoors and see the tide pool sections.  You can actually touch any of the creatures here, including this abalone.  Who knew they were so beautiful??  There were lots of green anemone and sea urchins to feel also ... some prickly, some ooey-gooey!! 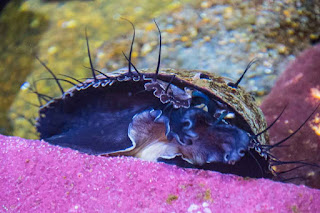 They have a lot of the most amazing varieties of anemone ... all very happy campers!!  I had a saltwater tank for awhile and tried to raise these babies.  They will actually move around until they find the one spot they like ... then stay there and become huge and beautiful like this guy hanging on to the side of the tank!! 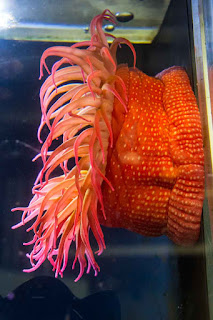 There were several varieties of jellyfish, like this one I'm sure you have seen in Monterey.  These beauties are rather dangerous however ... all jellyfish can sting you ... some more than others, so it's best not to touch those you find laying on the beach! 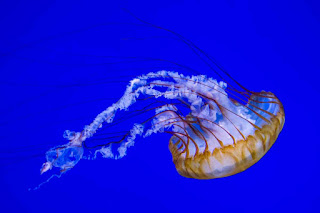 Lastly, only because I don't want to bore you with the other 50 photos I'd like to post, here's a moray eel ... a HUGE moray over four feet long.  I saw lots of these guys when I was diving, one that scared me badly when I was filming the ocean bottom.  He came up out of his hole to scare me away, since they are very territorial.  Looking through the viewfinder, all I could see was open mouth and a million teeth.  I thought I was a goner ... so I have a special place in my heart for these guys!! 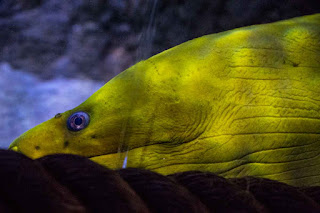 There's lots more to see at the Oregon Coast Aquarium, some of which I'll show you tomorrow.  This blog is already WAY too long!!

Posted by Nancy Kissack at 7:32 AM