Moby Dick And The Froggy Fog

It's been a hazy, foggy few days here on the coast.  That has worked out pretty good, keeping it cool and letting me get some spooky fog pictures.  The bridge looked pretty spectacular as I left early in the morning, headed to Lincoln City.  North of town, it was SO foggy that I talked myself out of it.  That's a long drive to end up with no pictures!! 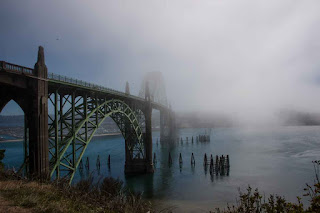 As I drove around the boat launch and RV park on the South side of the bridge, I spotted a small jetty out into the water where boats fuel up.  If anyone's around, I always ask permission to trespass, and the fuel dock captain said it was fine, as long as I didn't fall in.  It was too cold to jump in and save me.  Alrighty then!! 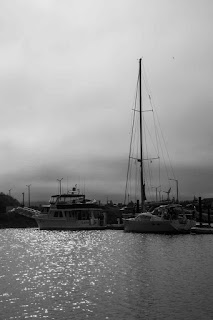 That's when the fog burned off rather quickly as the sun came out.  Darn ... I wasn't fast enough.  The view across the little bay was pretty cool though, as fishing boats like the one on the left came in to dump their fresh catch at the cannery. 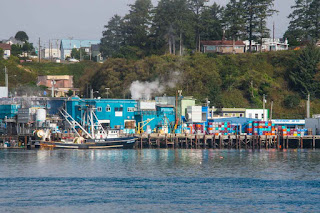 Since I was already here and it was early enough to find a parking spot, I spent the rest of the morning in Old Town Newport.  Although small, it was a bustling town in 1888 as fishermen unloaded their catch into horse drawn wagons for the trip to the processing house.  A couple of the original buildings still exist today. 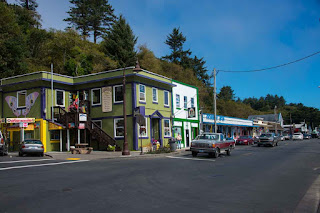 Towards the East end of town is the Coffee House.  Friends Barbara and Tom Westerfield ate here a month or so ago and posted pictures of Tom's corned beef breakfast order.  I LOVE corned beef hash for breakfast, if it's done right ... and this definitely was!! 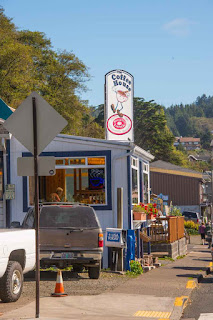 For $10 you can get this huge breakfast ... enough for at least three meals at my house!!  There's huge chunks of corned beef, yummy crispy fried potatoes, perfectly cooked eggs and fresh baked toast.  YUM!!! 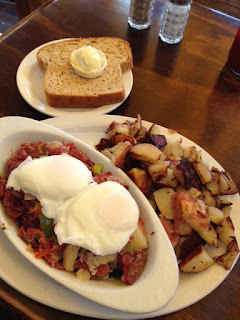 As you walk around Old Town, there are lots of murals ... more than I could take pictures of.  This Moby Dick image is a great one, having been placed on this building by who else ... Moby Dicks Seafood Restaurant.

The cannery has whales and sea lions, there's a Coast Guard helicopter, an underwater scene ... just lots of great paintings on many of the buildings. 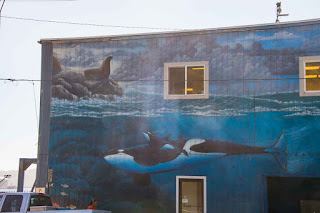 Even the old man and the sea.  There are also many great stores here ... not just your junky tourist traps.  Check out the cool stuff they have for sale and drop a dollar in the "maintain the sea lion docks" box. 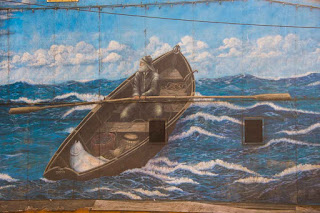 From the far side of the marina, I could hear these guys squawking and making LOTS of racket. While having breakfast, I narrowed their location down to the #1 Newport Dock ... easy to do with that much noise.  Here's what I found.  The locals, through donations and much haggling with the fishermen, were able to set up these sea lion docks for the sunning pleasure of a hundred or so critters. 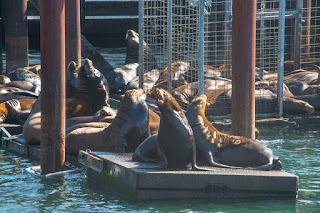 Unfortunately, the docks are not big enough to hold everyone, so in an attempt to get a little warmth from the sun, these guys hold their tails, one fin and heads above water. 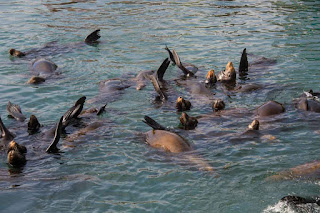 There were available sleeping spots, but sleeping sea lions don't like to be bothered, so when a new guy would try to jump up, he would promptly be admonished with pushing and shoving until he fell back into the water. 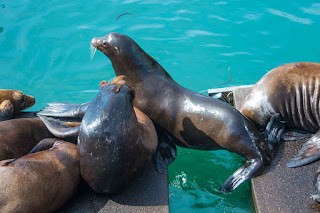 Not that they get up to chase off the interloper mind you, they just honk and sqawk, which is what draws all the tourists. 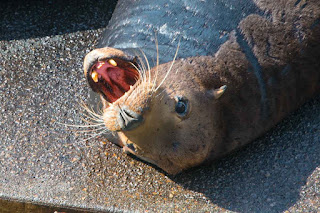 Like any wild animal, they're a kick to watch.  There is another mountain of rocks just behind these docks, that is also covered with critters.  This summer, they have lost much of their fur, but it will return for the winter. 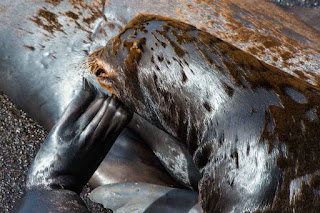 Most just snuggled up and soaked up the rays.  I can relate to that!! 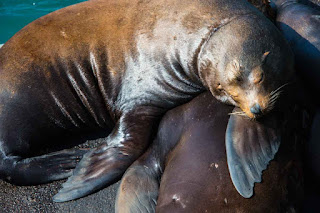 One last picture of the younger brood trying to gather a little warm.  With few exceptions, only the big boys and girls get a spot on the docks.  The fishermen aren't happy about this at all, but the merchants LOVE it ... it brings in the tourists who spend a little money. 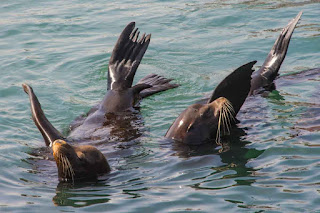 On the way back home, the fog started coming in again.  It's rather weird .. in my part of the country, if the wind starts blowing, the fog disappears.  Here, the wind blows it in from the ocean.  It appears however that Newport stays sunnier than most, as I heard people say they came up from Florence to get some sun. 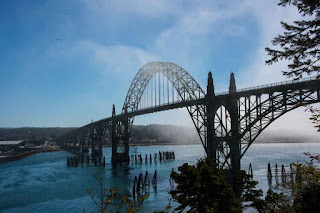 It's kind of spooky in the fog ... a couple of times I thought I heard something outside my rig, but never could find the culprit.  This morning, my outside doormat was all wadded up, so apparently something has been nosing around.  It must be all those good smells from my cooking!!  I would think the smoke alarm going off would have scared them away, but apparently not.