Unfortunately it's the last holiday of the summer and the weekenders are out in droves.  Lord let your patience shine down on me!!!   That's a pretty tall order, I know but I'm going to need all the help I can get!!

Friday started off on a bad note ... poor Cooper got sick and sat on the couch shivering for almost two hours.  I kept him next to me until he finally fell asleep, but then I was stuck.  Another hour went by and he seemed to feel better, so I headed out for a quick trip to Tu-Tu-Tu, a kitchen store in Nye Beach. 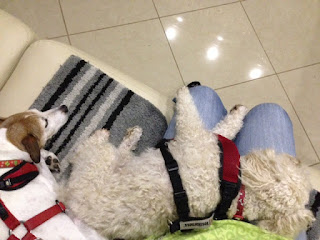 I'm pretty sure this little store has every single type of kitchen item you could possibly want.  I LOVE this store!!  I keep thinking if I get enough recipe books and gizmos, that POOF!!  I'll become a good cook!!  With this book at least I'll be eating HALF as much dessert!! 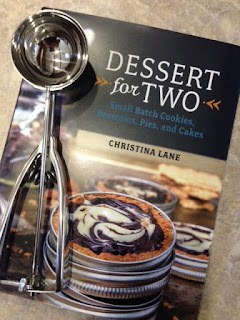 The ice cream scoop is more for scones and cupcakes, the gorgeous turquoise blue dish towel just because it was pretty and the bamboo cutting board to replace the plastic ones I need to throw away. 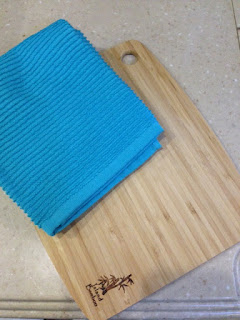 When I returned home, Cooper was feeling MUCH better ... good enough to play the ball game anyway.  Since it was still pretty quiet in the neighborhood, I made a batch of blueberry scones with another new recipe.  Not as good as the first batch, but yummy none the less. 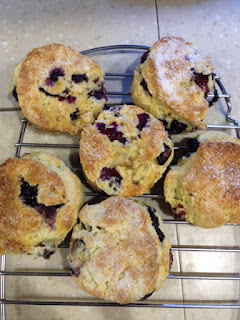 That's when the crazies started to arrive.  The first guy parked in overflow, or at least tried to park.  It took him five tries before his rig was somewhat in the space.  If you need a short course on parking, read Nick Russell's blog, it's a good one.  Then the guy immediately hooked up his generator.  Why not park in one of the spaces below that has power?  I figure it's because he doesn't want to be too close to noisy neighbors, but he certainly doesn't mind bothering anyone with HIS noise!!

He then hooked up a 150' water hose to fill his tank and a 150' electrical cord.  That made me happy, since I figured he wouldn't have need for the generator.  Next this group below of screaming, yelling adults showed up to camp where there is no tent camping.  To make it even worse, one older kid was running around naked (hence the half kid in the picture I photoshopped) and the other in just diapers.

They promptly unplugged the neighbors power cord and plugged in their own.  Little do they know that they have set up camp in the doggy potty area.  Everyone, including me, has used this area for their dogs, as evidenced by the white doggy bag dispenser on the pole.  Maybe they think those baggies are for them. 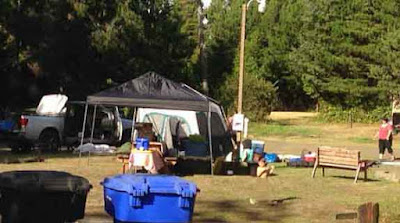 Good news however!!  Someone pulled in directly next to the generator guy blocking most of THAT noise.  At 9:45 last night, people were still arriving, driving around and around looking for places to park when there were none.  I think Thousand Trails is pretty good at overbooking.

Today is the Newport Farmers Market which I will attend bright and early.  Hopefully I can find enough stuff to cook, keeping me busy for the next three days.  I'll just pull my shades down and turn the TV UP!!   If everyone prays for wind, I might even spend most of my time at the beach!!!