In looking at the map given to me by the Tour Guide huckster, I discovered something called the V Bar V Ranch.  I instantly recognized a cattle brand and decided this was a place I wanted to check out.  I wasn't sure what to expect since they called it a Cultural Site, but after driving down a long single lane dirt road, I quickly figured out it was Cowboys and Indians.  Benjamin Taylor and his wife homesteaded here in 1900, raising cattle under the 100 brand.  Over the years, the ranch changed hands several times before finally becoming the V-V Ranch.  Eventually the University of Arizona traded some other land for this site due to the Indian rock art found here. 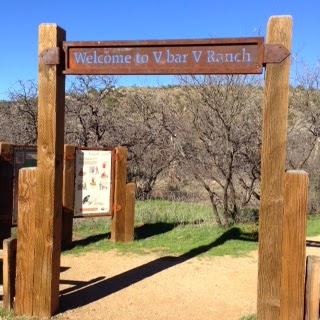 Most of the original fences are still here, including this front gate to the house.  Unfortunately, the house did not survive.  There is an old stone residence just North of here, but the Forest Service has made it into a firehouse. 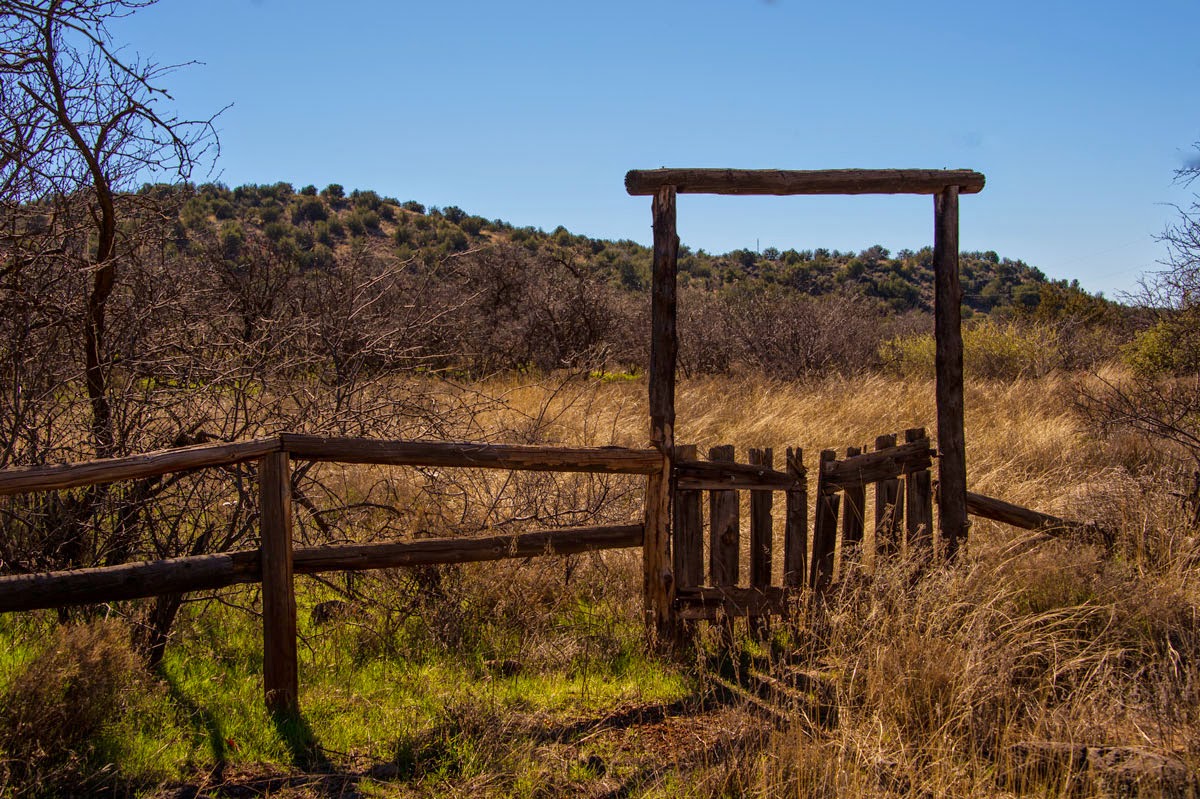 The back of this gorgeous fireplace has V - V inscribed in huge letters.  They even had a magnificient  barbecue pit off to the left made from the same materials.  What's a cattle ranch without a barbecue pit, right?? 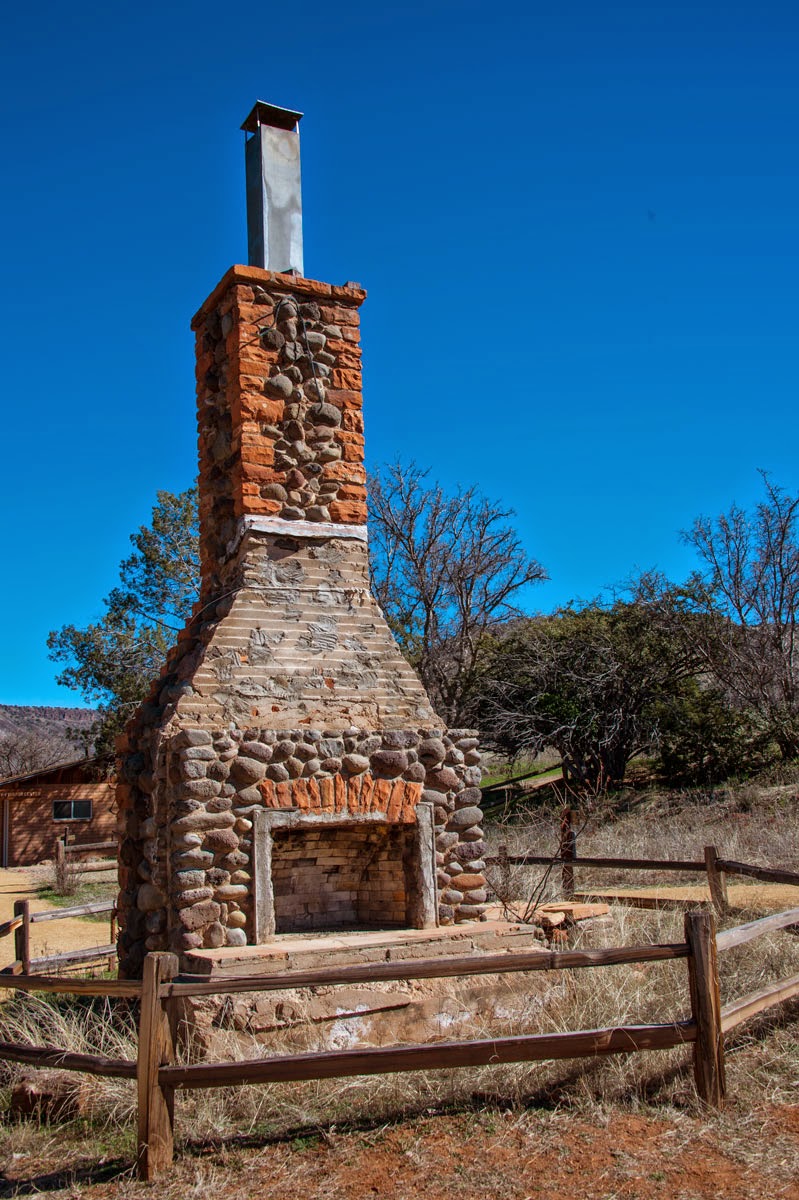 As I walked down the path to the rock art site, I could imagine living here.  It's very quiet, except for the sound of rushing water coming from the creek below, which runs year round.  It's not only a perfect site for a cattle ranch ... it was a perfect site for the Indians that came before. 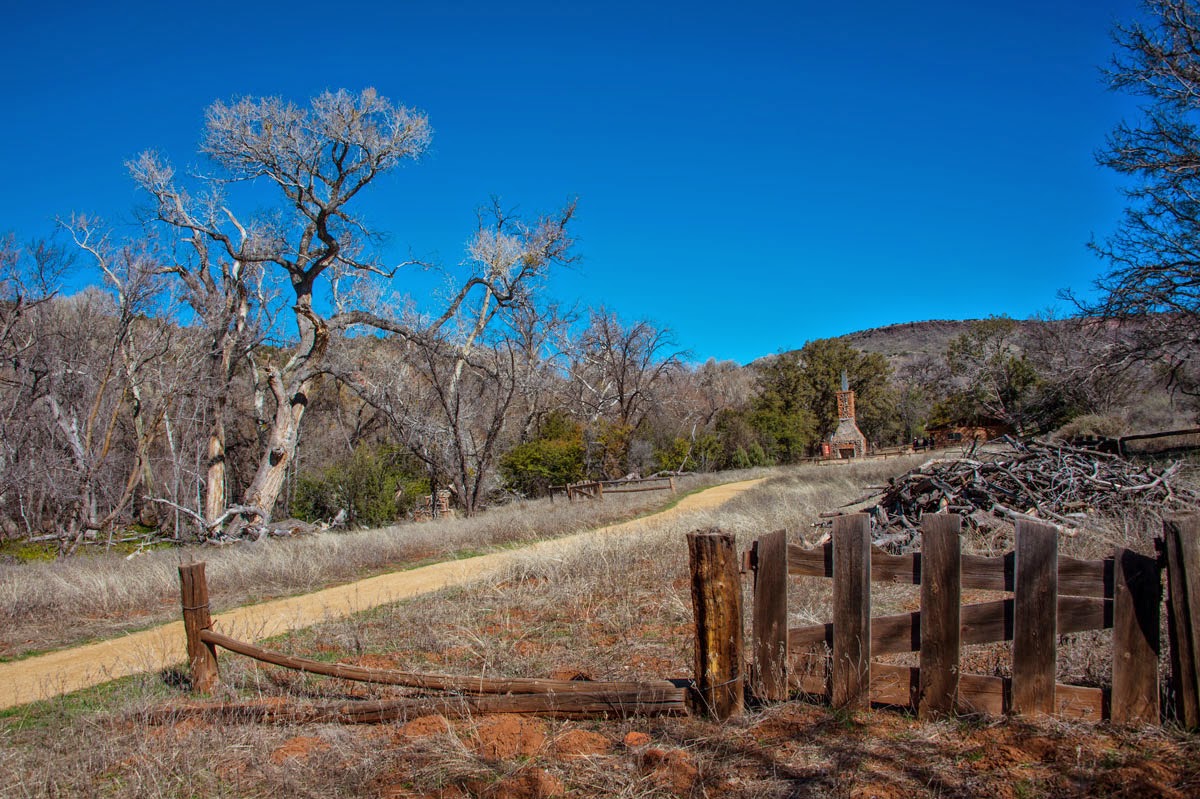 This map shows the terraced mountain top where they grew food.   Many items have been discovered around the top from more than 800 years ago. 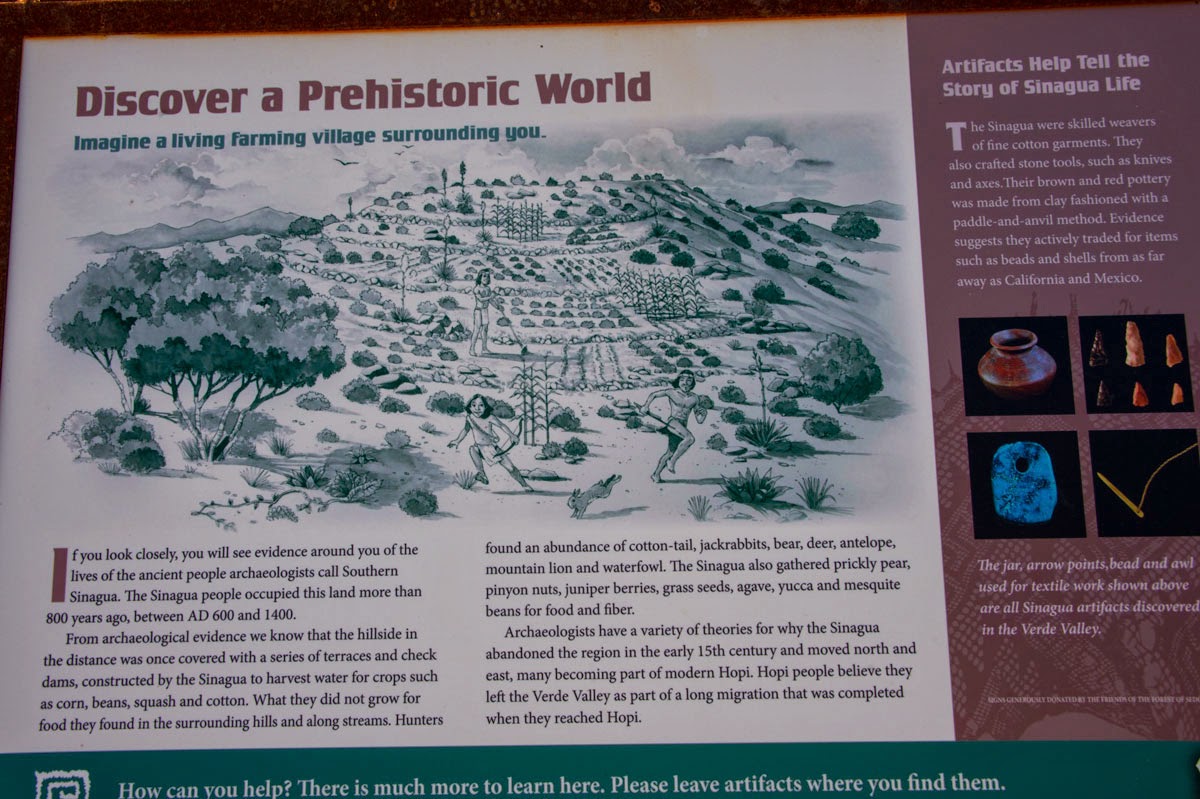 In the middle of this picture is the little mountain and valley area where they lived.  Probably trampled over by thousands of cattle, evidence of their tools and living quarters have been found here.  There were also strange round circles on the ground where nothing was growing.  No mention was made of these, but maybe they were pit homes or possibly where archeologists had dug up artifacts.  No one seemed to know ... or notice!  What circles?? 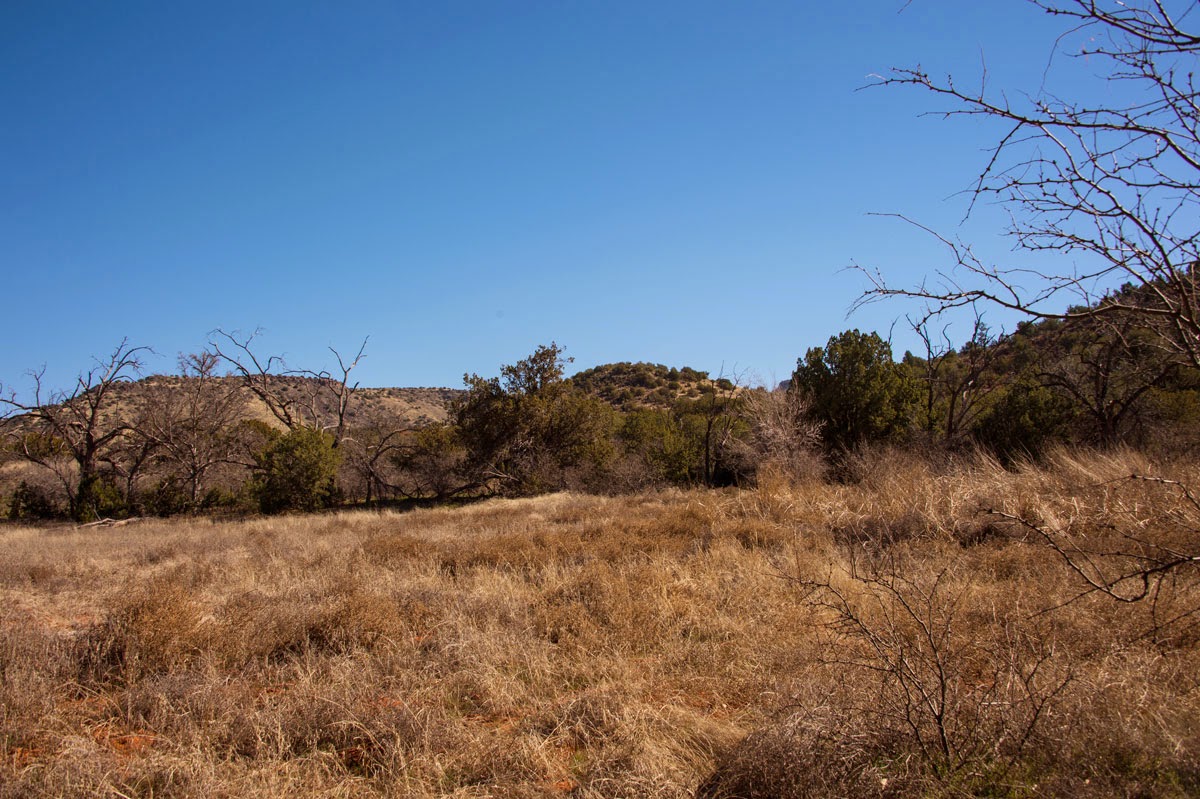 Even if you're not interested in the Indians, the walk down the path to the rock art is just amazing.  These trees are spectacular to say the least.  I keep thinking the sign said Arizona Sycamore, but I may be wrong on that one.  Several here have grown to humungous proportions!! 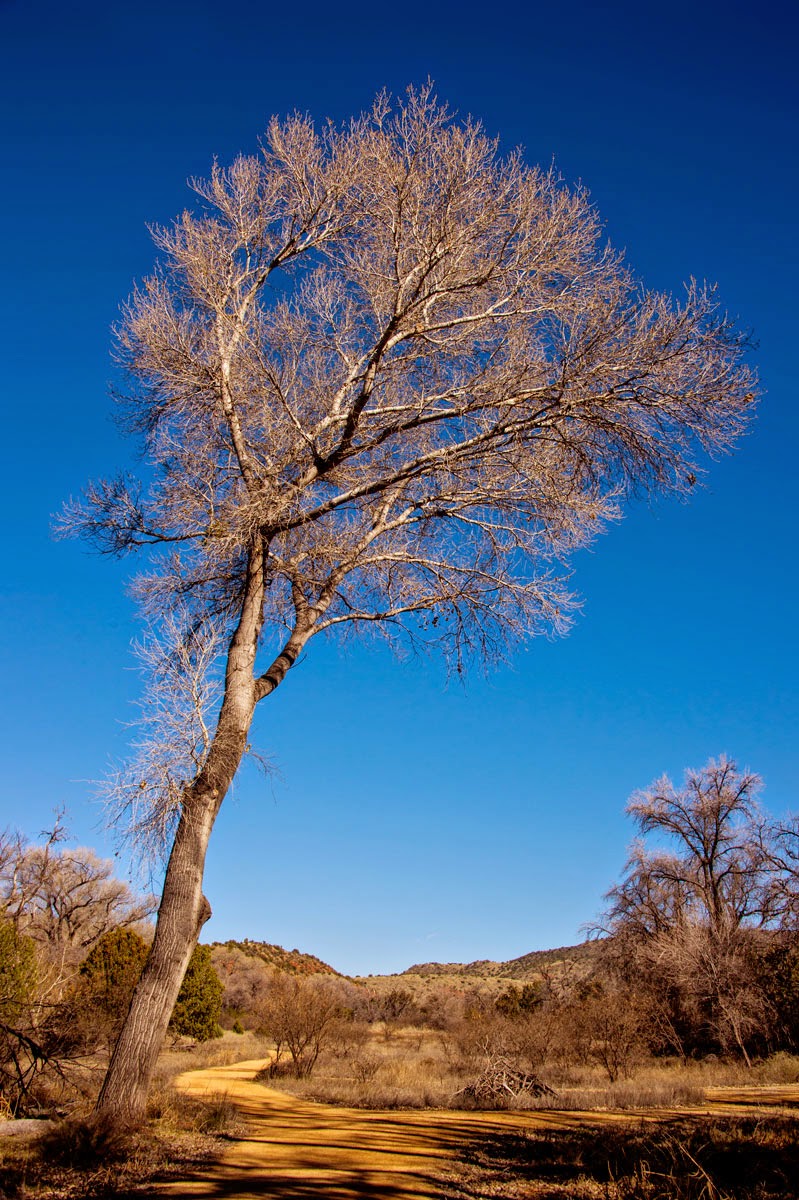 Finally, you arrive at the rock site, with only a small rope between you and the carvings.  There is a docent here who explains some of the drawings.  Yes, there are as many explanations of these drawings as there are scientists who have studied them.  I can't say I agree with the docent, but the point is, no one will ever know what all these symbols mean.  These petroglyphs are all so close together however, that someone was really busy. 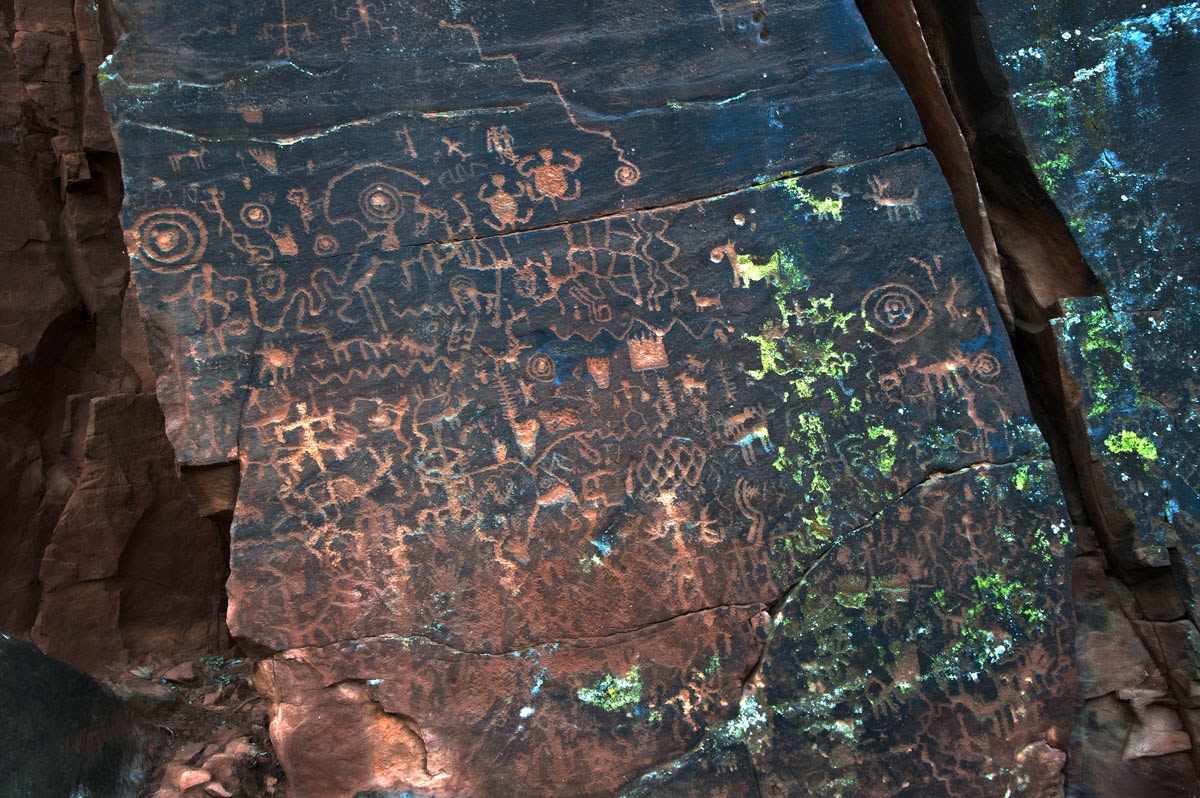 I'm pretty sure I saw "husband ... go catch dinner", but that's just me.  The scientists say this is a sun watcher calendar, but these rocks move quite a bit over the ages.  Yes, the sun shines over several circles now ... but was it in the exact same place so many years ago?  Maybe the rock wasn't even cracked way back then. 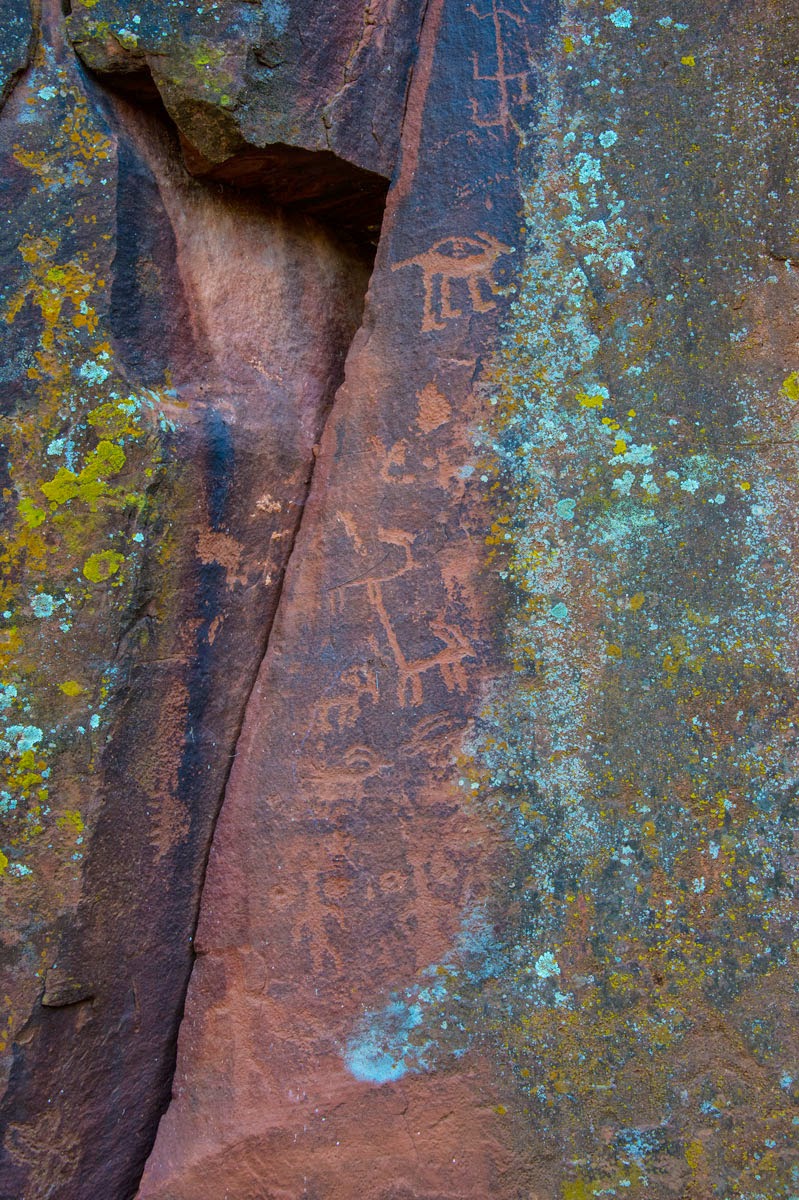 This is supposed to be either a snake or a rope.  Looks like a path over the mountains to me, but again, I'm no expert.  They now believe that only the Shamans were allowed to carve things here after they went on a drug induced "trip".  I'm not sure I believe that one either ... 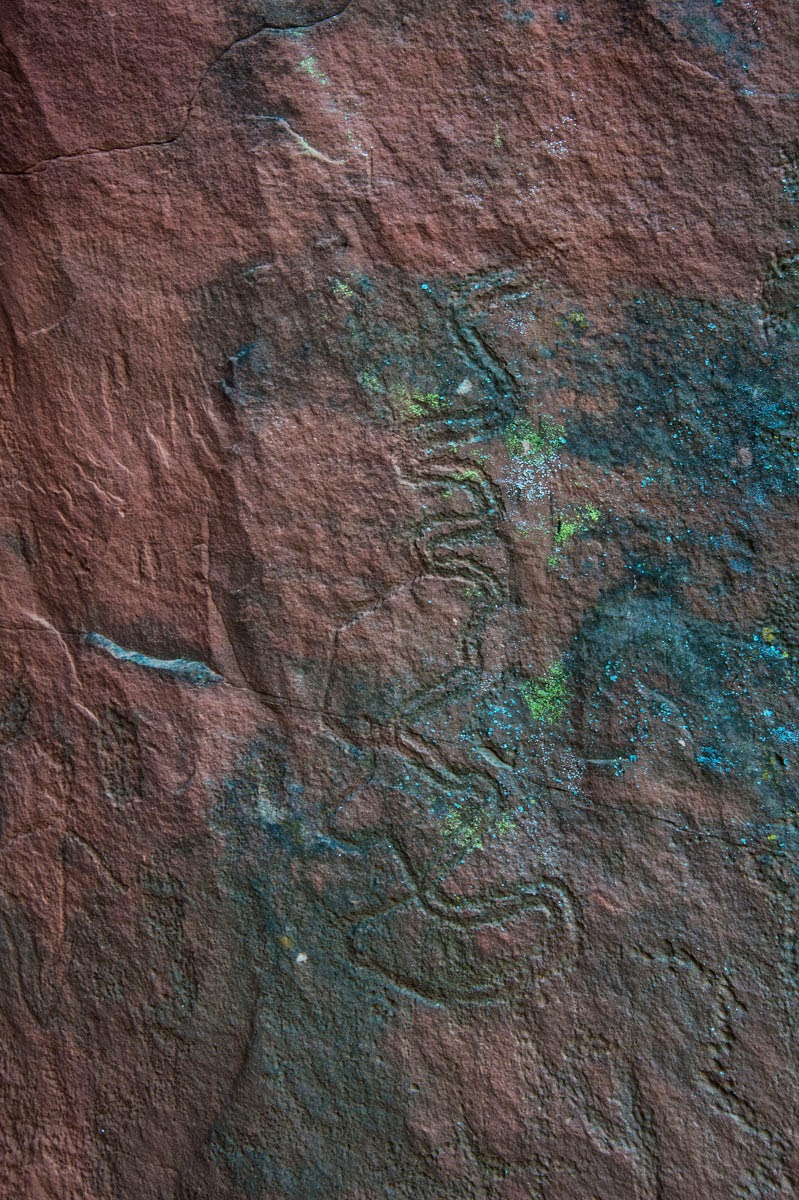 Some stick figures have long necks, some long bodies and some long legs.   One looks like he's roasting over a fire!!  There's just no way to interpret all these carvings in the rocks, but they definitely are MOST interesting and worth the beautiful walk to get here. 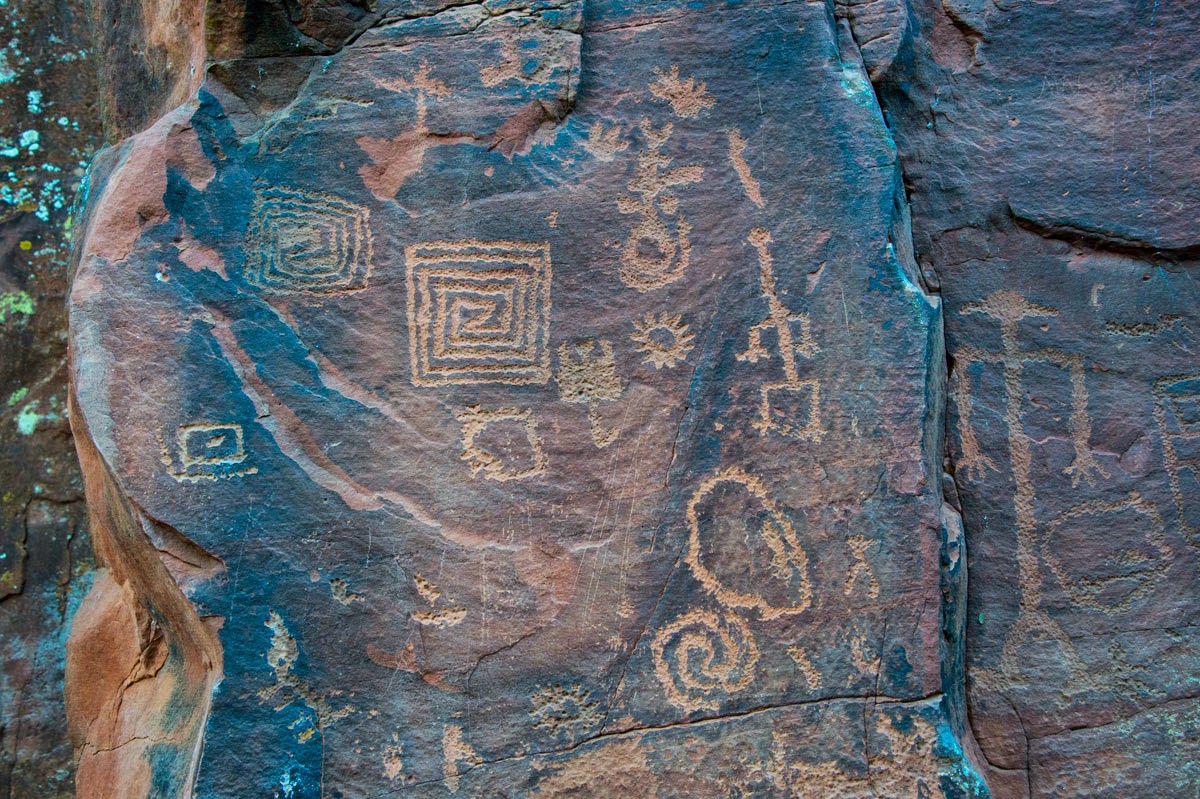 Can't you just imagine tying your horse up to this tree while you dangled your feet in the creek below?  Yup ... I could live here!! 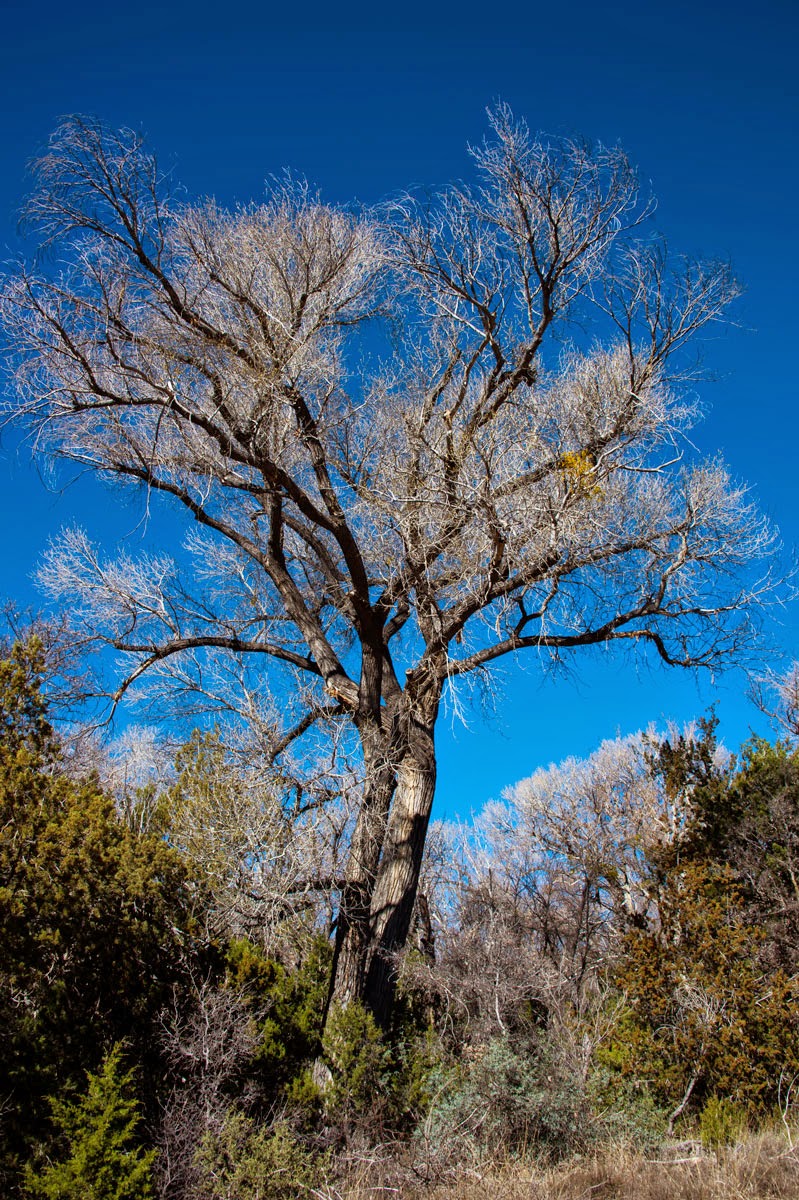 From the V Bar V Ranch, it was a short drive to Montezuma's Well.  I think we all know Montezuma never lived here, or even visited here, but non-the-less, it was given this name by the first Spanish (I think) to arrive in this part of the country.  If you were traveling across this desert, would you believe there was water here?  Possibly they saw evidence of the Pueblos and just came over to check it out. 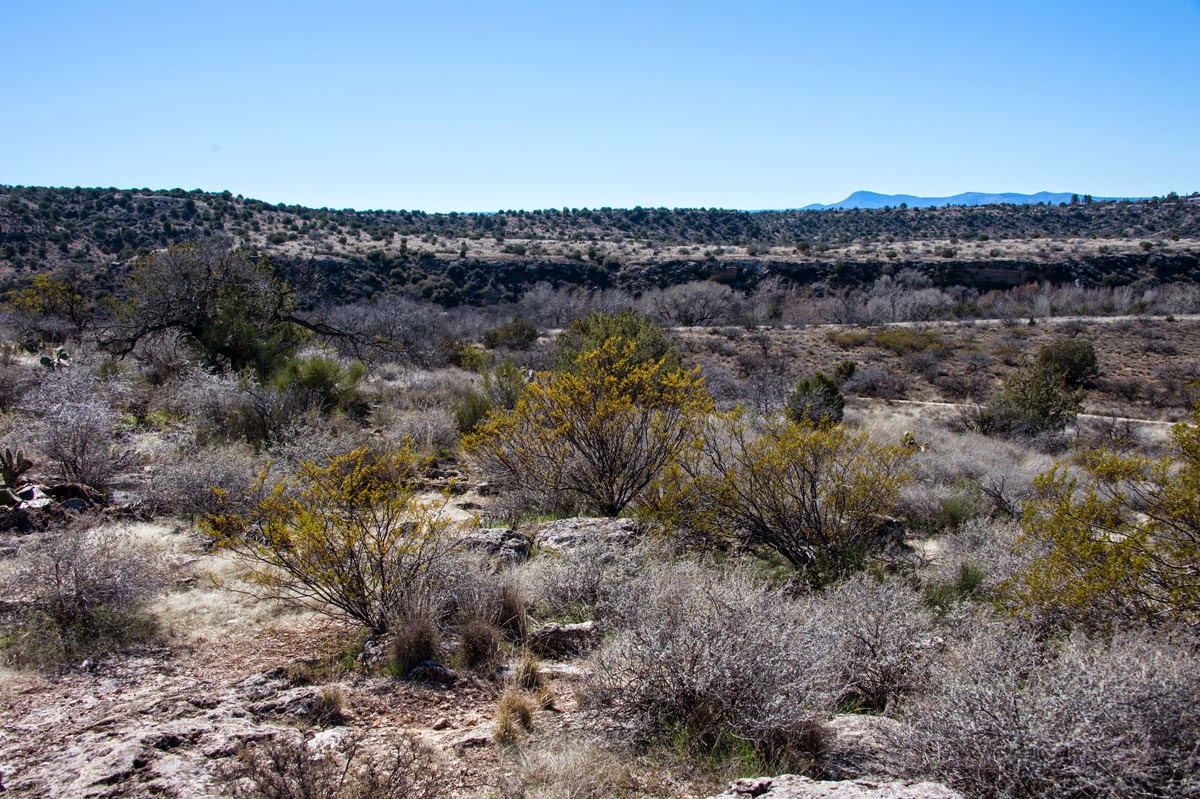 Weren't they surprised to find this amazing hole in the ground full of water.  Not only that, but it never goes dry.  The underground spring hits a huge granite rock before heading up to the bottom of the well.  In fact, they have never really found the bottom.  On the back side, the water found an outlet and flows at a tremendous rate ... continuously!! 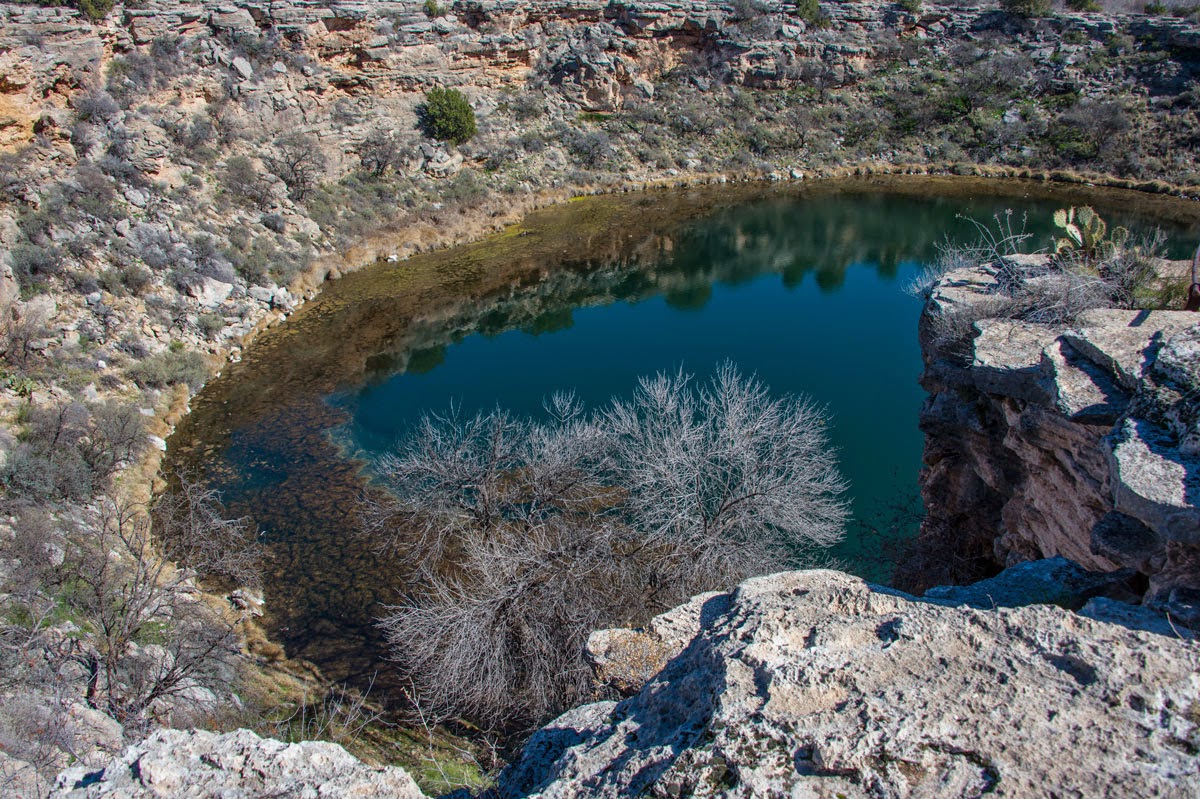 This map shows an interesting aspect of this area.  All of the big red dots are large Indian pueblos, supporting hundreds of people, basically cities.  The smaller dots are other living sites that have been identified.  There were a LOT of people living in this valley thousands of years ago!! 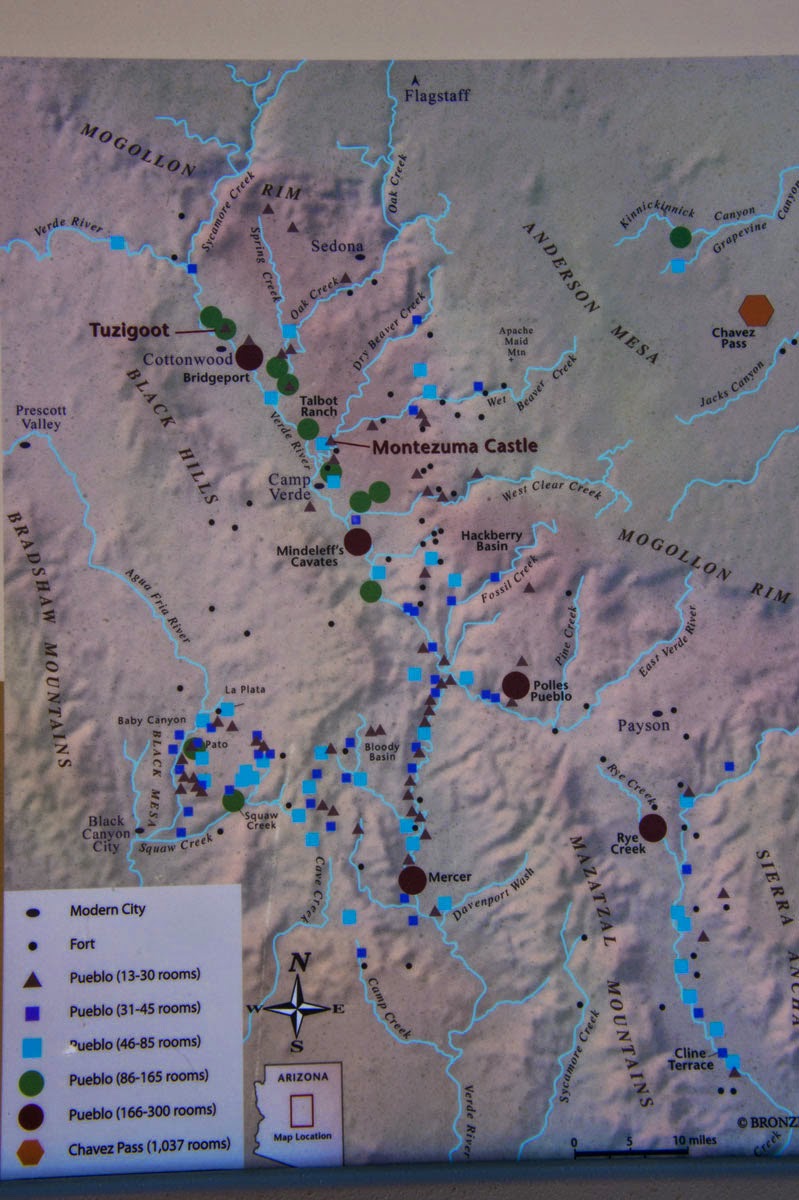 At the top edge of the well is the remains of one of the larger pueblos.  In the far distance is a small mountain where the city leaders would meet to exchange goods and ask the Gods for good crops.  With so much water in this area, the Indians took advantage by growing most of their food. 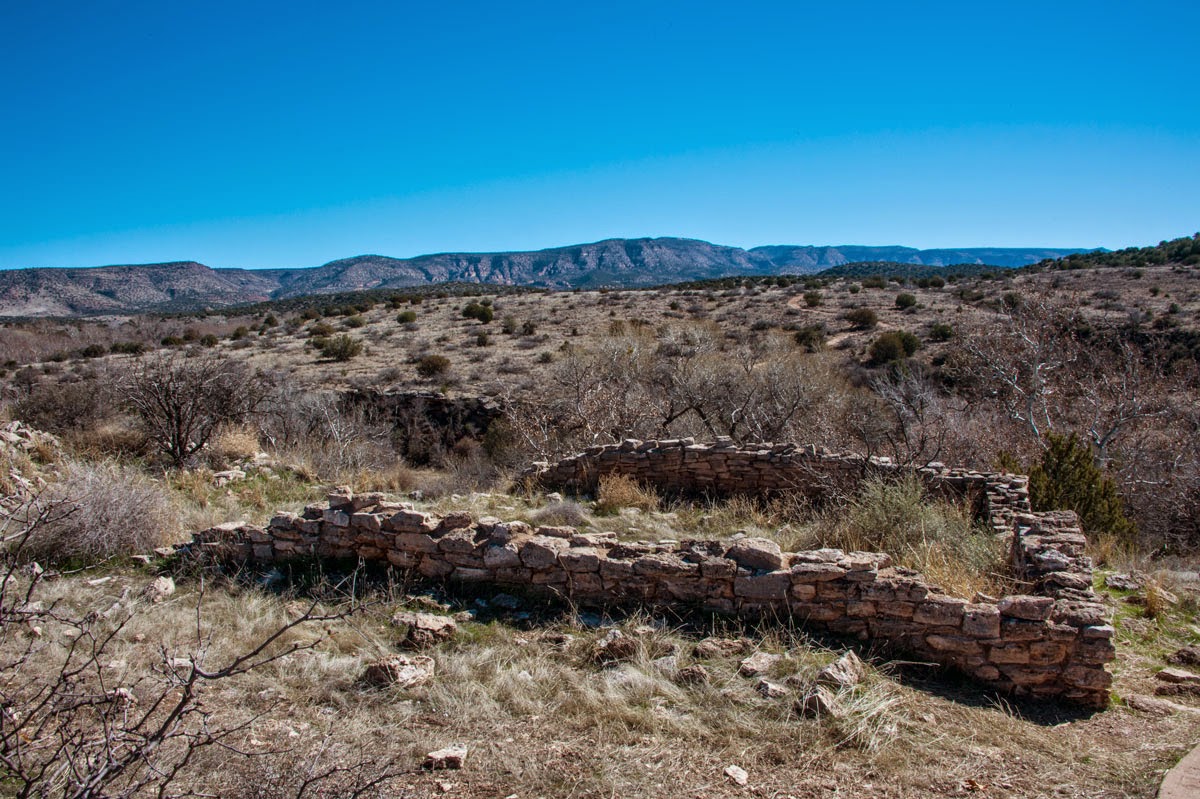 This guy stood on the rock and posed for me before flitting off to find seeds in the grass.  With Beaver Creek so close behind the well, running into the Verde River, there's lots of wildlife around.  This beauty is about three inches tall. 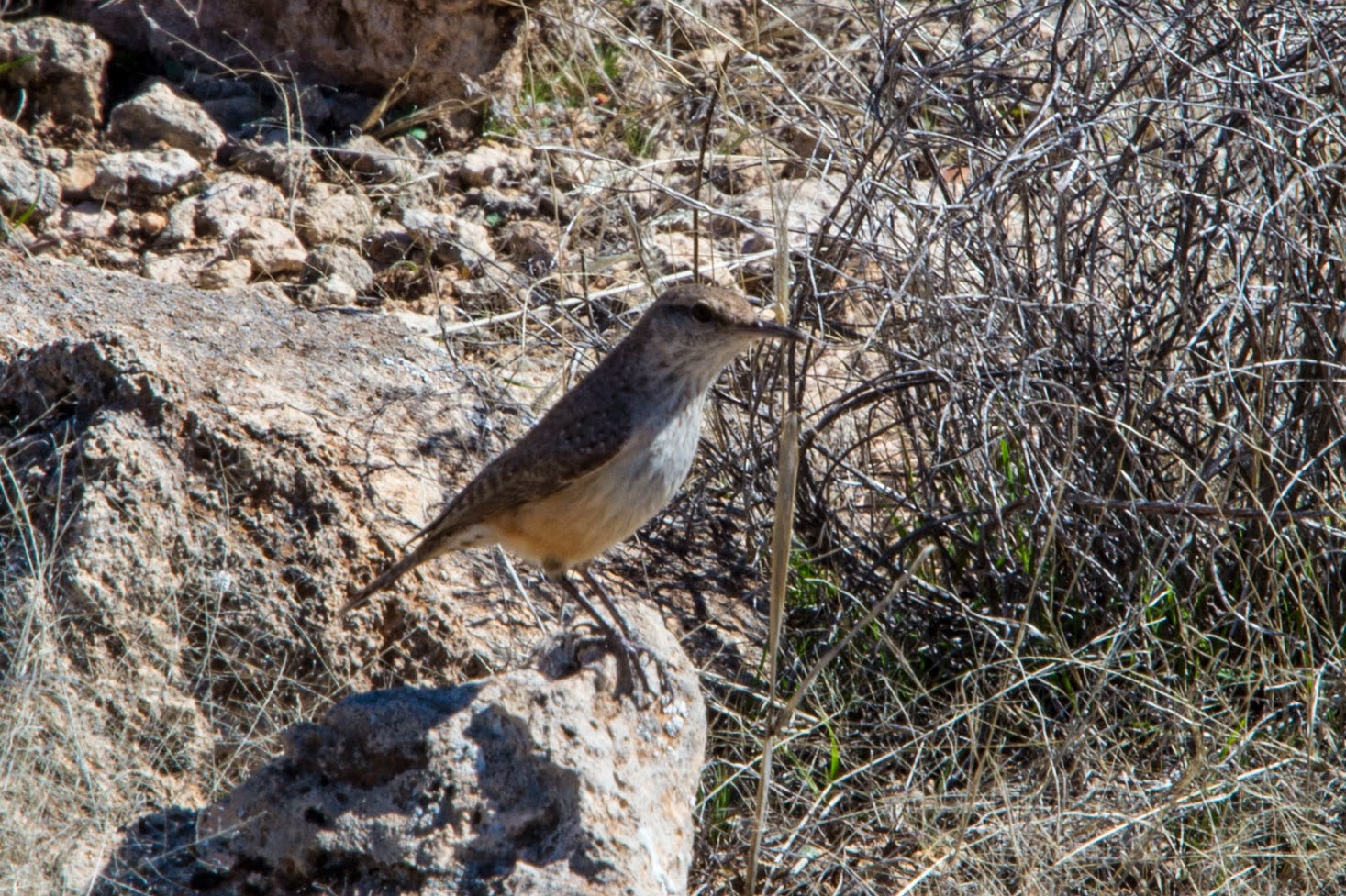 This is where the water comes out of the ground and would run down into Beaver Creek.  Originally it is said the Indians diverted this water around the mountain to water their crops, but I doubt they knew anything about the concrete that the water passes over now. 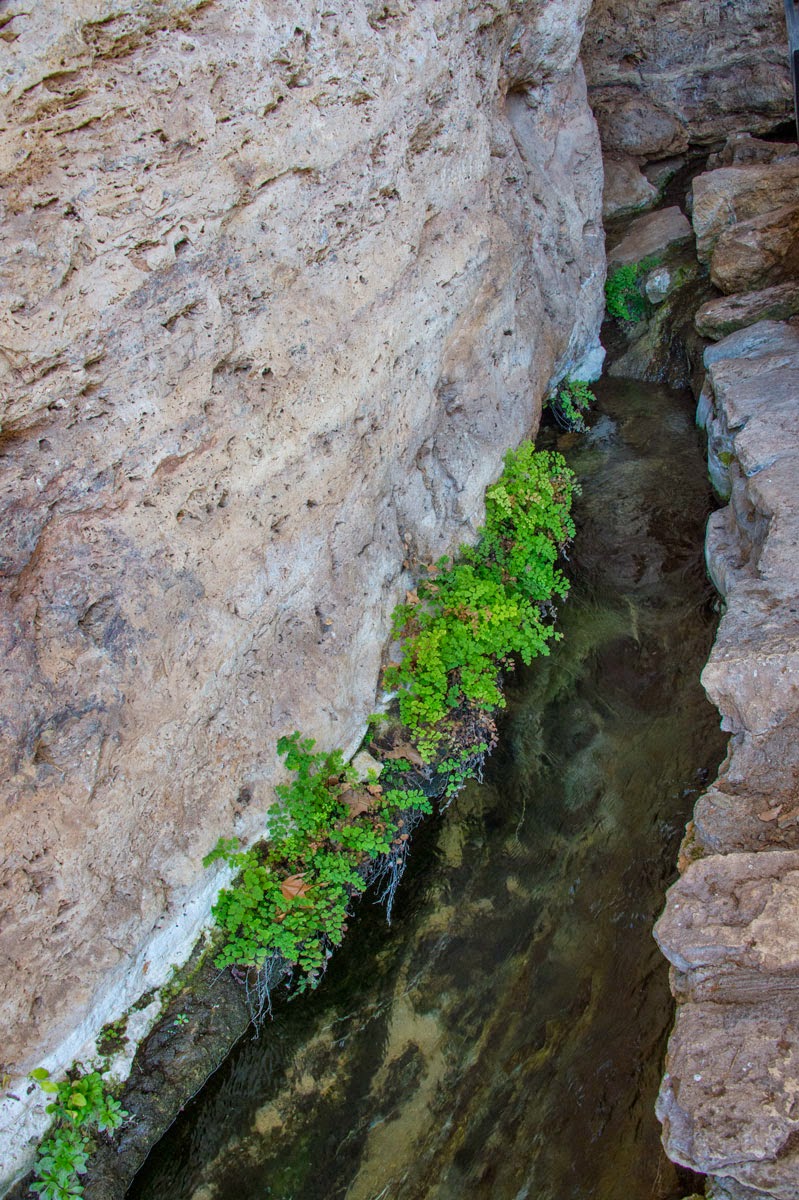 Another little beauty put on quite a display for me as I paused on the rock steps heading back up to the main path.  I have no idea what these birds are ... even though I tried to look them up in my Field Guide to North American Birds.  The markings made me think this was a youngster ... that and the fact that he had no fear!! 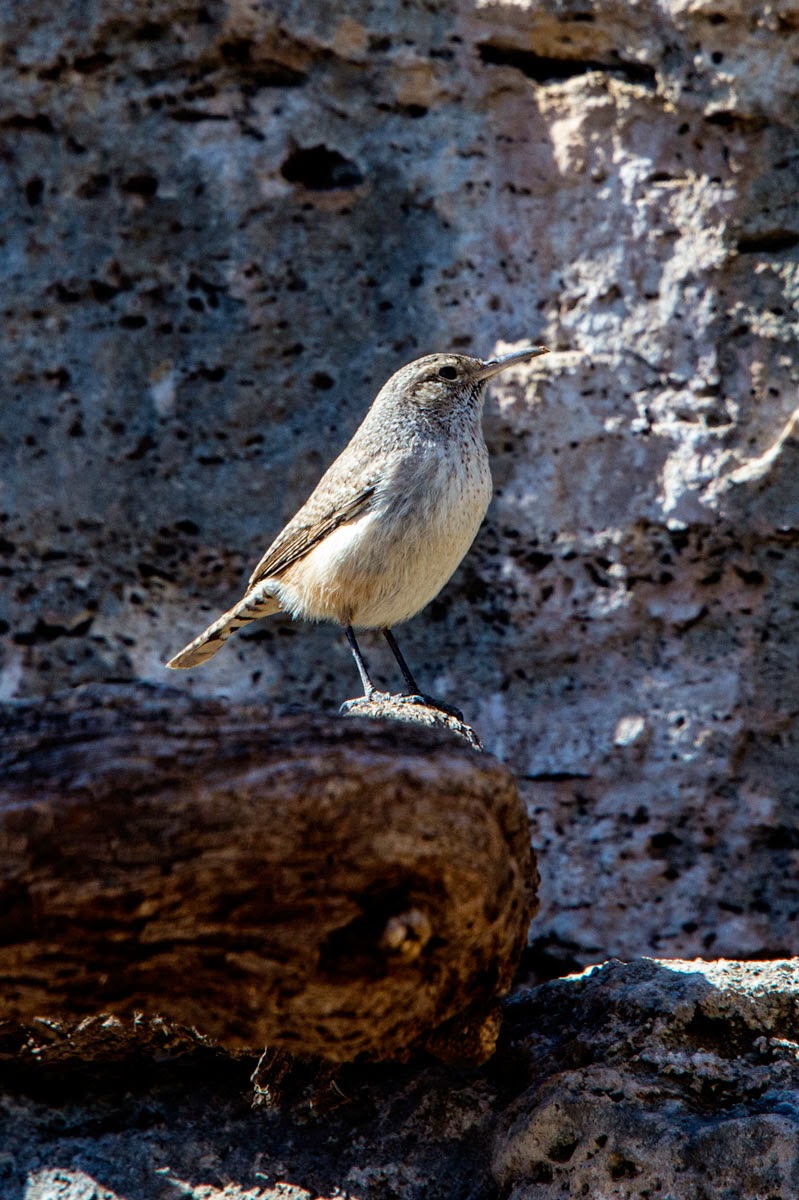 It was a long day with lots of hiking, so I stopped at the store on the way home for some cowboy grub!  Never EVER go to the store on Saturday.  Yikes it was crowded!!!  An hour later, I got home and made a delicious pan of chicken enchiladas.  This pottery casserole dish is my all time favorite, found in Branson Missouri.  It just cooks food perfectly and is SO easy to clean!! 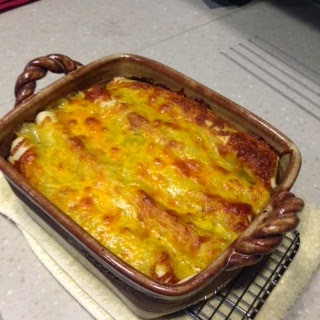 Since it's Sunday .... I think .... I'm going to stay home and do laundry ... or maybe not, since that's not the most exciting thing I can think of to pass the time!!!  It's another day ... and another adventure is just around the corner!!