Tuzigoot is Apache for "crooked water", which is the name of an ancient pueblo built by a culture known as the Sinagua.  It consists of 110 rooms, some three stories high, stacked along the contours of a mountain top.  That's a pretty good feat considering they only used rocks and mud and their hands. 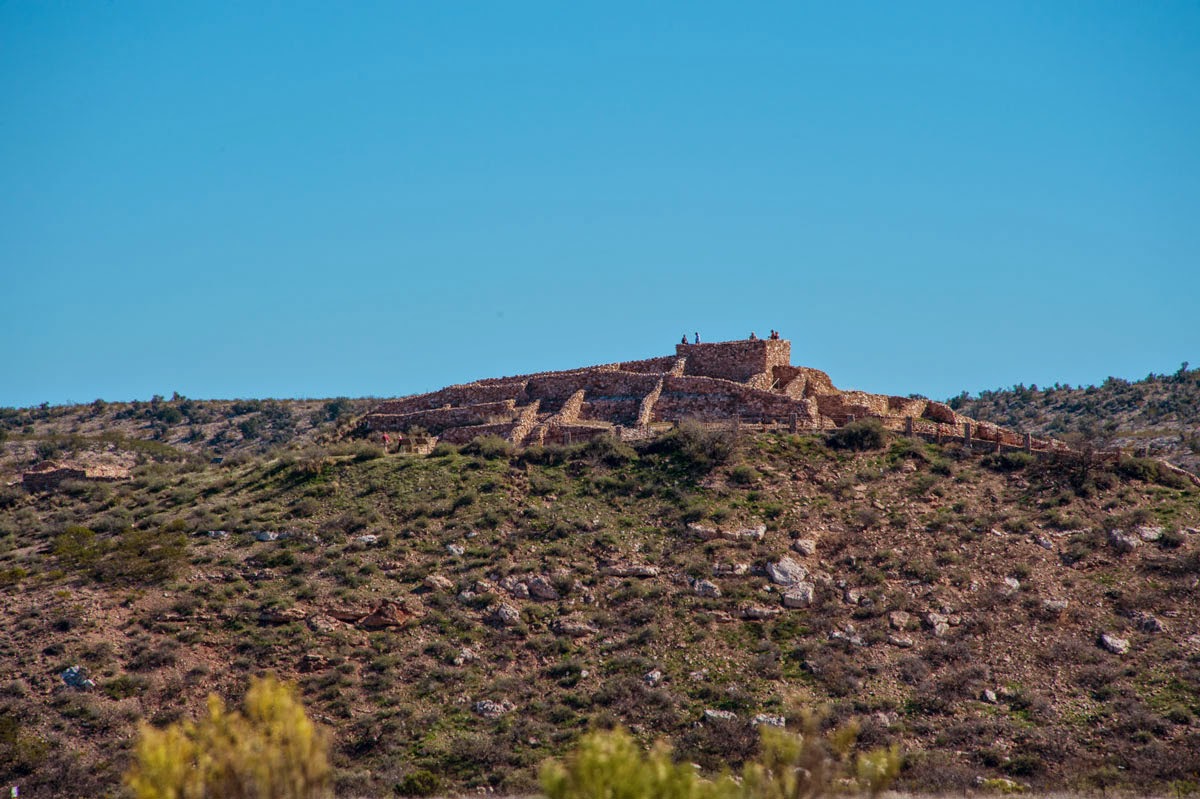 It was named  "Crooked Water" from nearby Pecks Lake, which you will hear about later in the week.  Built about 1000 AD above the Verde River flood plain, it was the perfect site to raise a family ... until the years around 1400 when they decided it was time to pack up and leave.  The Sinagua were agriculturists ... farmers ... with trade connections that spanned hundreds of miles, as evidenced by the artifacts found at this site when it was excavated in the early 1930's.  There are pots from tribes hundreds of miles away, along with seashells and other trade items. 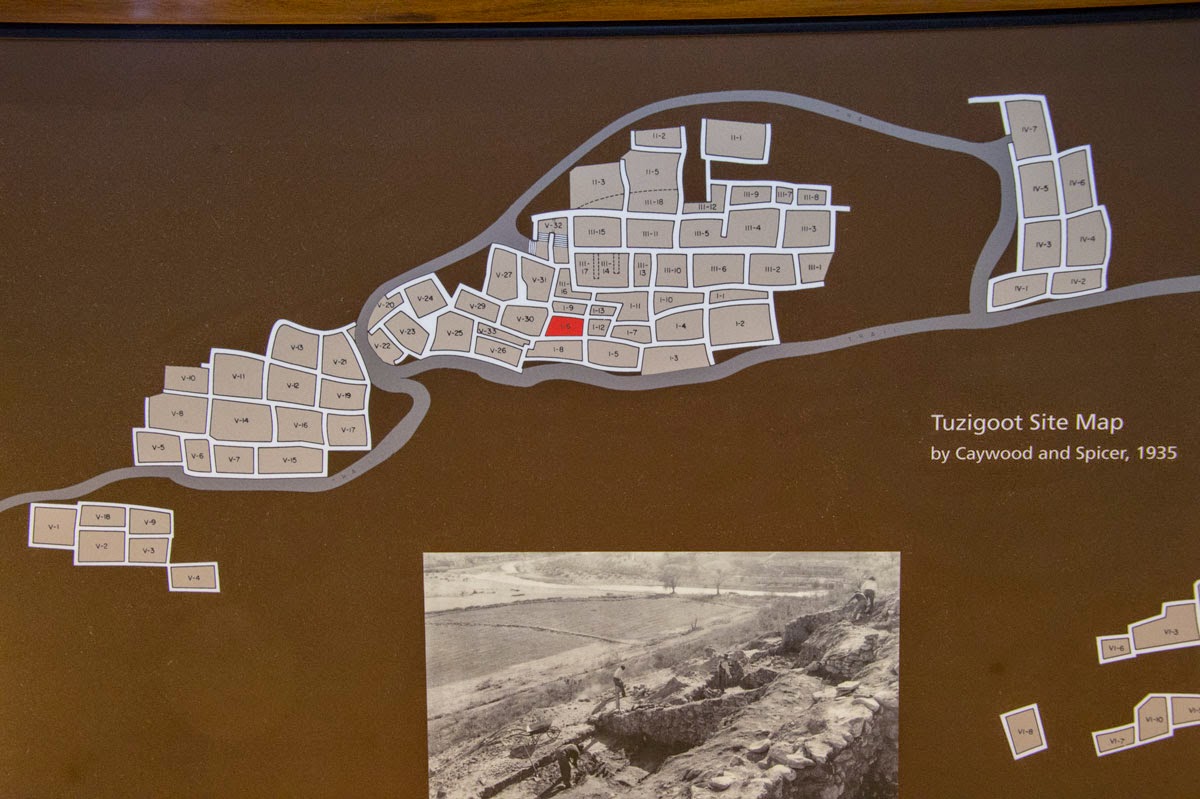 With approximately five people per room, this was a pretty big city for it's time.  I darkened this picture to better show the different layers, but even that didn't work.  The big Kahuna lived on the very top level, while the workers lived further down the hill.  Each room, although different in shape, is approximately the same size, big enough for about five people to lay down in at night, with a small fire ring in the middle.  These rooms had no doors or windows, so access was probably through the roof and down ladders.  During the day, life was spent cooking on the roof or working in the fields. 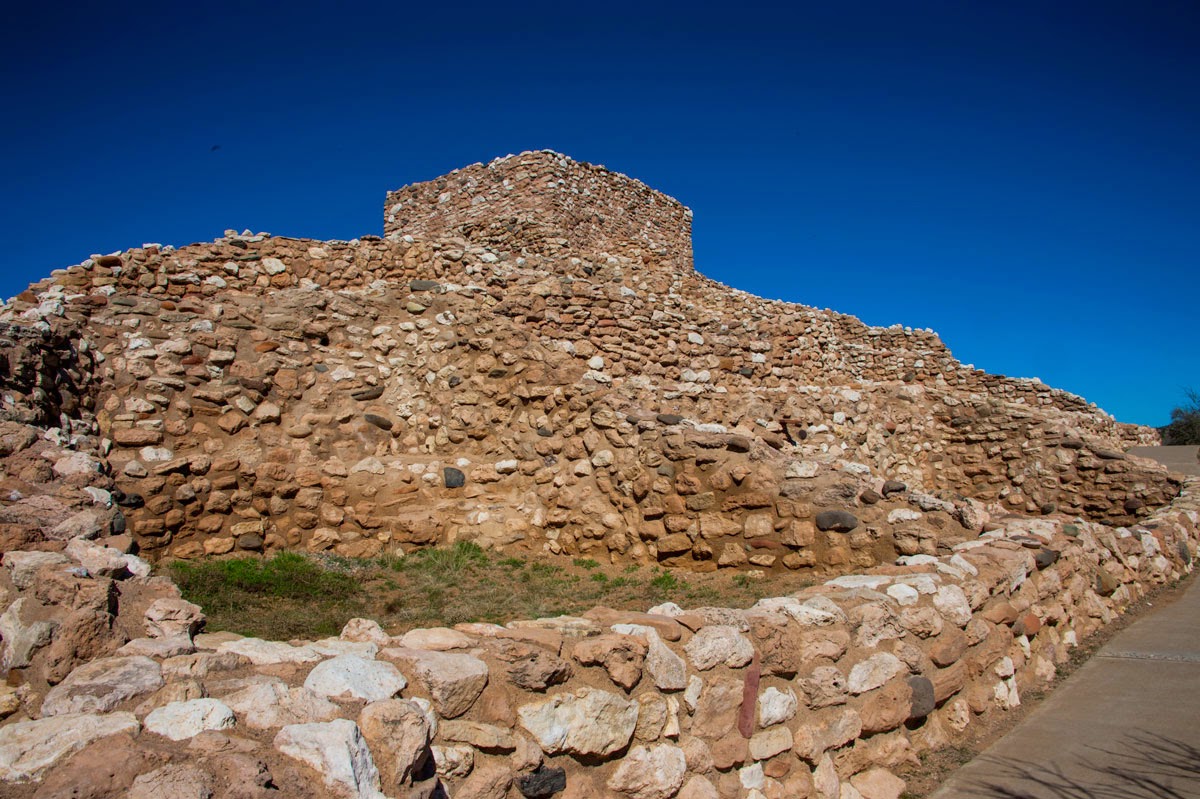 On this trip, I discovered that tons and tons of artifacts were found here, all transferred to a vault in Tucson, none of which is accessible by anyone except the local Indian tribes.  These few pots are the exception.  The Sinagua weren't interested in art or "pretty" pots ... these were utilitarian.  The big pots held water, positioned on the roof for drinking and cooking.  When first discovered, they were shipped off to be rebuilt using something like Gorilla Glue.  Not too long ago, it was decided that was bad, so off they went again to be completely deconstructed, cleaned of the glue and put back together with whatever is the newest thing in pottery glue. 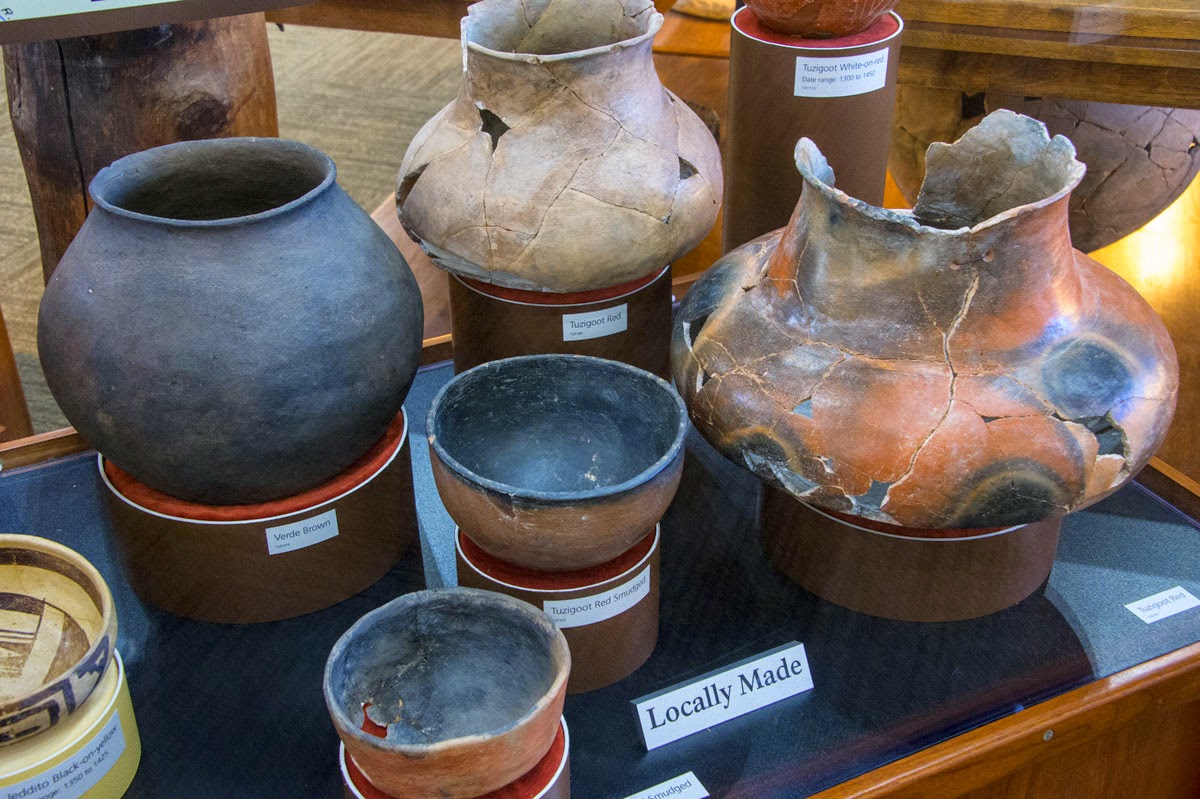 Another interesting thing to note ... the local Indians can go and claim anything they want from the vaults in Tucson and do with it whatever they wish.  Personally, I think it should be displayed for ALL to see ... but the position now seems to be that it is THEIR stuff, no matter who spent the huge sums of money to retrieve it!!

I'm standing next to the common area, left open for ceremonies and such, but from here you can see far off into the distance to the next pueblo. I guess even back then they wanted to keep an eye on their neighbors. 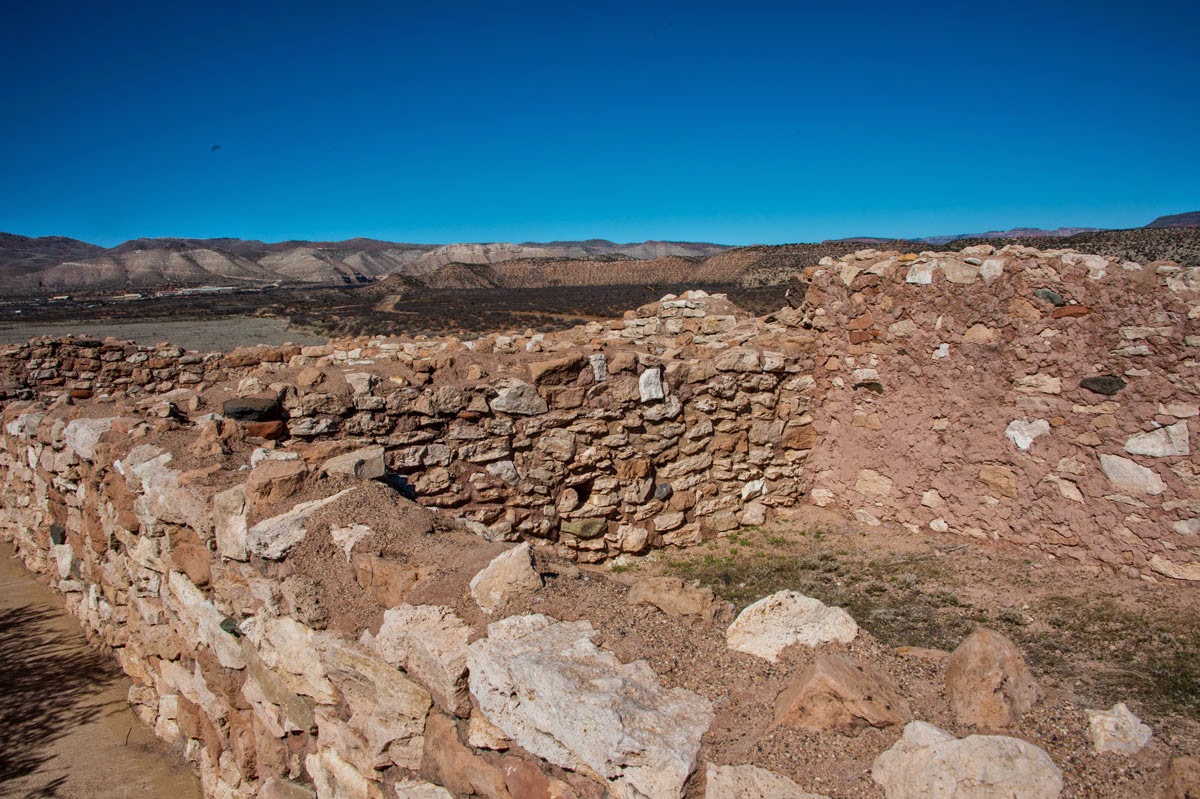 Much of what is shown here is original.  Very large stones were placed at the bottom of the wall, then smaller ones stacked on either side.  The middle was filled with rocks and mud to make a wide, stable wall to support the second floor.  The upper portions have been reconstructed using concrete, to show how they would have looked originally.  Concrete is a bad thing apparently, like Gorilla Glue, so now crews come in every morning and chip out pieces, filling in the holes with a red mud mixture, more like the original Indians would have done. 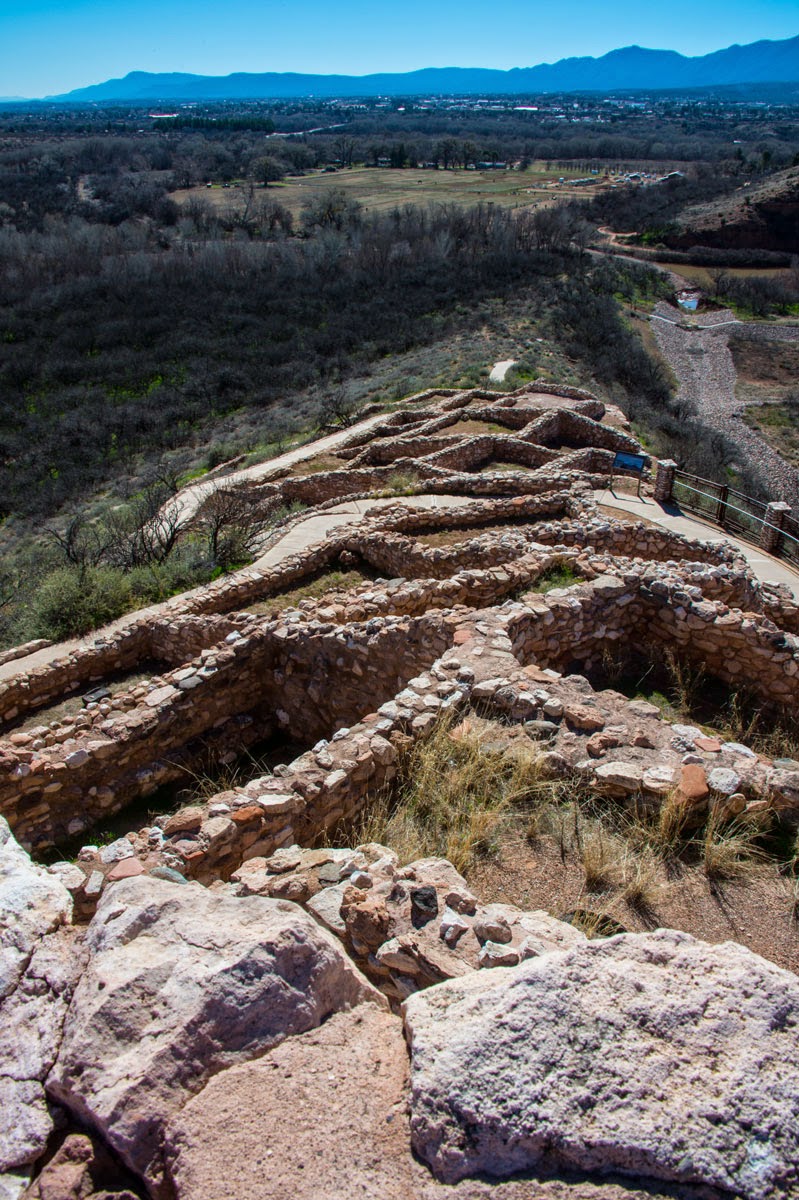 Here's an example of the roof construction.  At two points in each room there were poles placed into the ground, topped by two larger poles and many smaller to support the floor above.  Covered with willows and mud, that became the roof they spent most of their time on.  Apparently they had problems with pack rats, just as people in the desert still do today ... there's evidence of them EVERYWHERE!!! 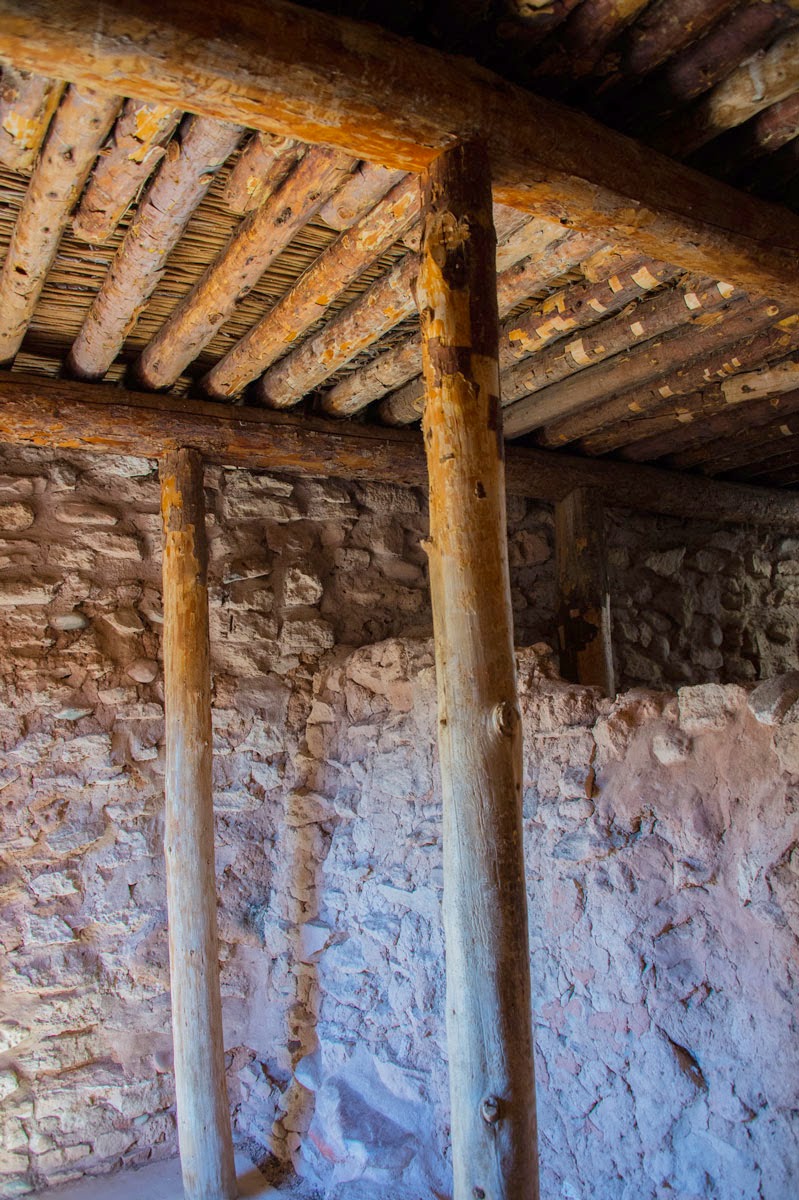 By the time the mining companies came along, the mountain looked like this from hundreds of years of erosion and the collapse of walls.  Who would think there was anything here to take a closer look at?? 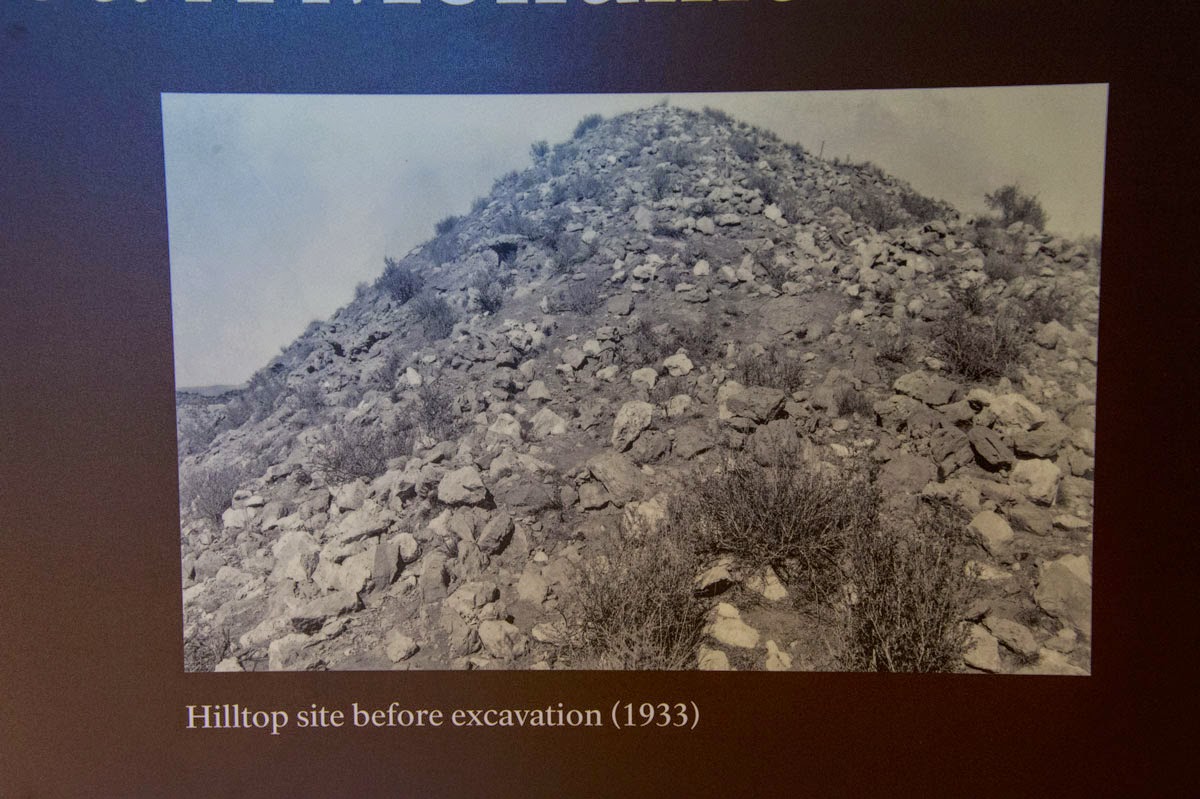 The United Verde Copper Mine needed a place to dump their slag and muck from the copper smelters.  Right next to that rocky mountain looked like a good spot ... resulting in this lovely mess.  Huge pipelines were construction from wood, held together with iron rings, to sluice the stuff down the hill.  There must not have been any environmentalists back then!!  It was the desert and no one really cared, until the wind came up and began swirling tons of copper dust into the air around the towns. 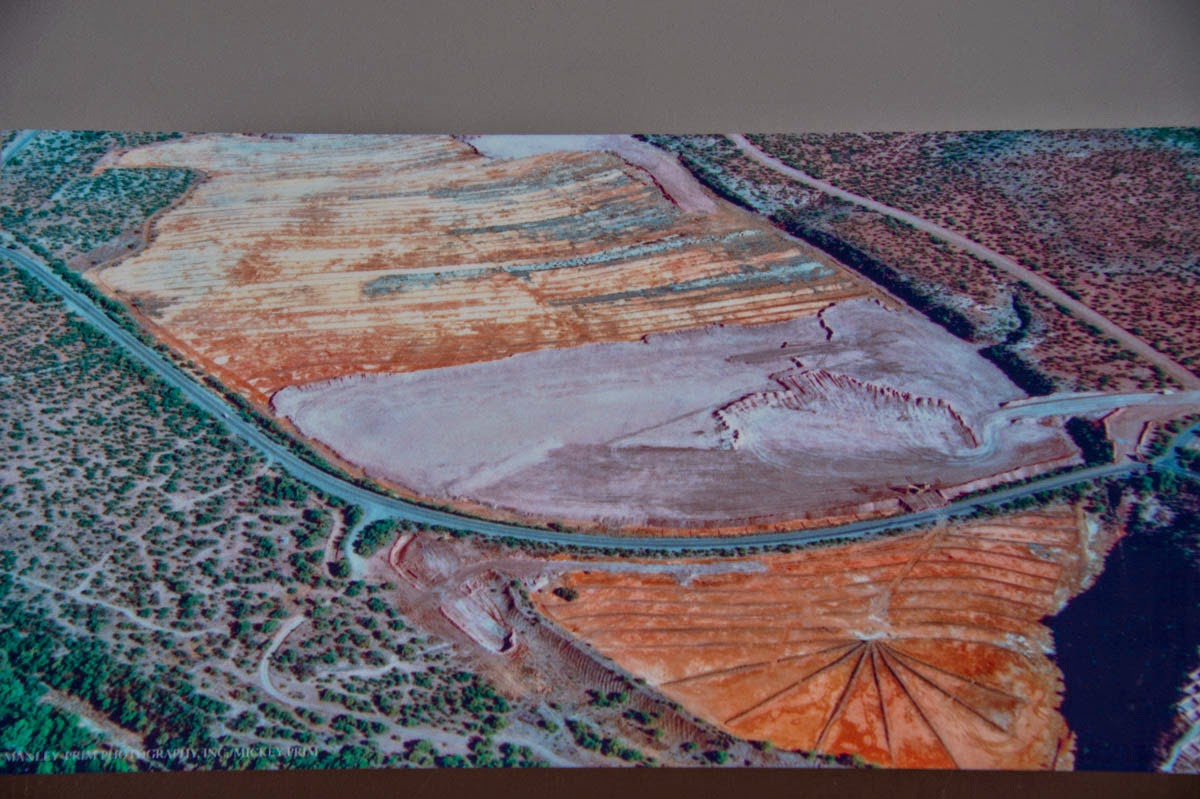 When the smelter finally shut down, the area was cleaned up and re-vegetated ... sort of ... and this is what it looks like today.   I didn't really see too much vegetation and I doubt anything will grow in copper ... except wine grapes!!  But that's another story for another day. 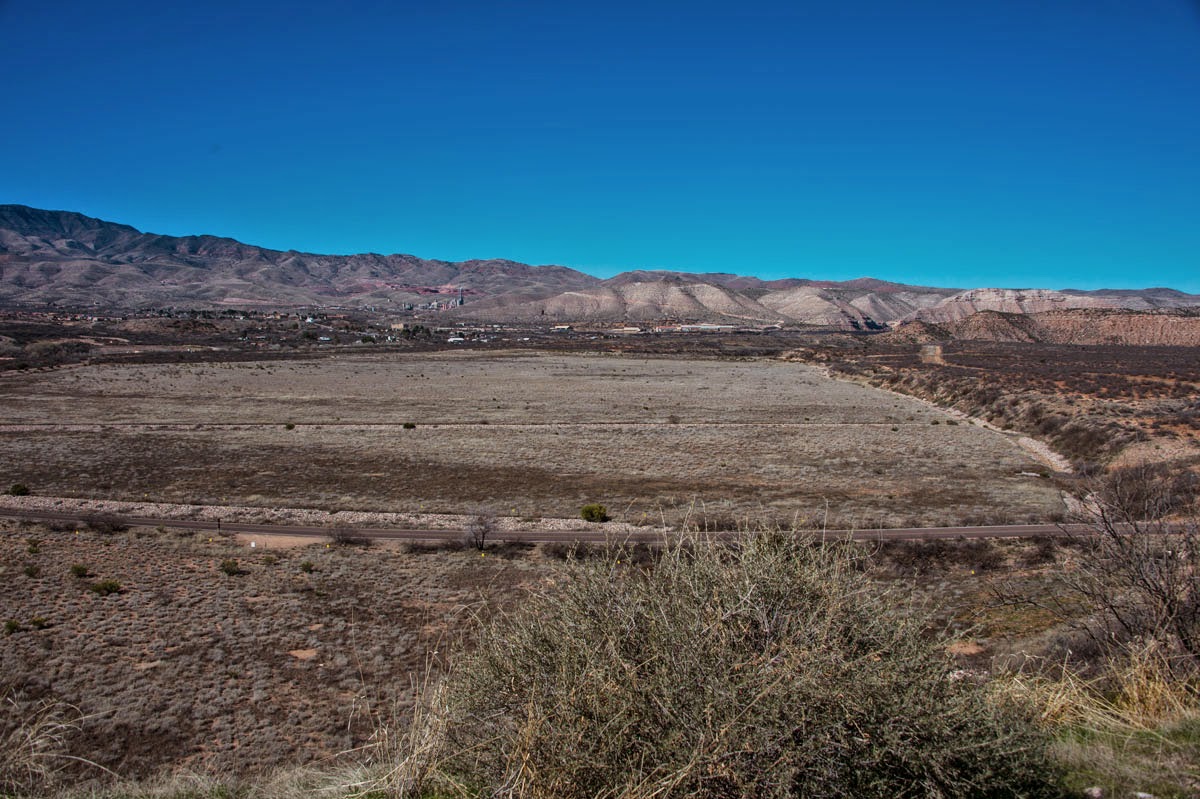 Tuzigoot is located just off Hwy 89A from Cottonwood to Clarkdale.  You can't miss the signs, and don't miss this site.  It's pretty amazing to stand on top of this mountain and imagine yourself living here, except for that part where the women have to go get the water half a mile away, with the long walk UPHILL on the way back!!  You KNOW that would have been "women's" work!!!