What do these two things have in common??  They both can smell rotten!!    I hate sales phone calls, so when my phone rings with a number from New York or Pennsylvania where I don't know anyone, I immediately go on the defensive.  Usually, I don't say hello ... I just hit the answer button and listen.  Yesterday, Windows Technical Service Department called from India (???) to tell me they were very concerned about my Windows computer.  I know it was India from the accent!!

What are you selling, I asked!  "Oh we're not selling anything ma'am, we are concerned about the passwords on your computer."  Really ... boy that could be a REAL big problem says I.  "We want to check them to be sure your computer is safe."  You're a liar, I said rather loudly.  A BIG FAT LIAR!!  I know that because I don't have a Windows computer and if I did, you're just trying to get my passwords ... LIAR!!!  His very quick response was "OH GOD!!!" as he hung up.  Be careful out there my Windows friends ... this scam is going all around the country.

As of January 1, you better buy your eggs BEFORE coming to California.  Proposition 2 states that chickens must now have "X" number of square feet in which to live, making it impossible for most farms to sell eggs in California.  The farms that are here, had to double the number of cages they have, which of course means double the size of the buildings, in order to produce the same number of eggs.  Who the heck thought up THIS one??  This carton of eggs cost me $5.99 ... that's right ... $5.99 for a dozen eggs.  The bad news is they all have to go in the potato salad I'm making today!!  Another really good reason to leave California.  It's just getting ridiculous here!! 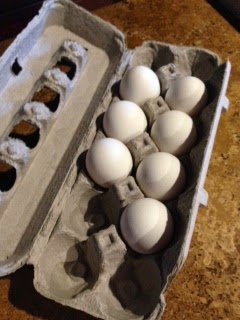 Trying to be a "little" conservative, I didn't want these little Halloween snickers to go to waste, nor the milk and cream in the refrigerator, so I decided to try Snickers Ice Cream.  If you believe that, I have a bridge to sell you!! 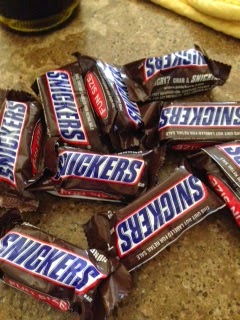 After taste testing the snickers, I chopped up quite a few to add at the last minute.  This seemed to work well with the Heath bars ... it should work well with Snickers. 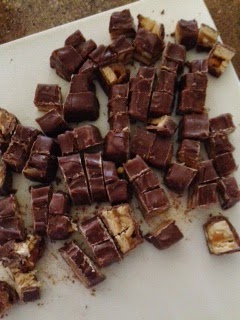 Such a simple recipe ... 3/4 cup sugar, 1 cup whole milk, 2 cups cream and a tablespoon of vanilla, to which I add a tablespoon of instant coffee ... in twenty minutes, you have coffee ice cream with candy.  What could be better??  Once done, I loaded it into small containers and left it in the freezer to get a little more set up. 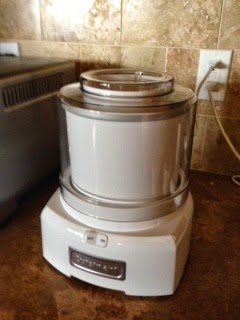 While waiting for the ice cream, lentil soup with nice big chunks of ham sounded pretty good since it has been pretty chilly.  I let it simmer for 90 minutes and voila ... such good soup I could have eaten the entire thing!!!  Chalk one up for Nancy!!   Now for dessert ... uhm mu nmn un ... those darn Snickers pieces were frozen pretty solid, and when I bit down, I couldn't get my teeth apart for another bite.  YIKES!!!  This isn't good at ALL!!!  A little hot water and my teeth separated enough to remove the snickers.  Those little nuggets of goodness will require a little mouth defrosting before chewing!!!  I guess it's back to Heath bars!! 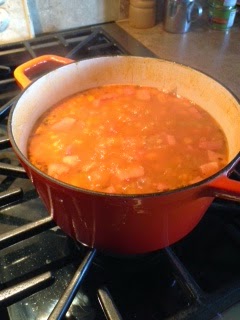 I did have some gorgeous cloud images I took yesterday, but I've run into another problem.  My new camera doesn't like the old Photoshop CS6.  Previously, I downloaded a newer version, which I'm not sure is still available, since Adobe has gone to the Cloud for everything, including a charge of $10 a month to use their service.  You can still have Photoshop on your computer, but it will never be upgraded again ... meaning eventually they've GOT you when it fails and you still want to use Photoshop.  It's just amazing how companies can figure out ways to screw the public!!  Since I just found this out while downloading those images, I'll spend the next couple of hours trying to figure out a fix!! 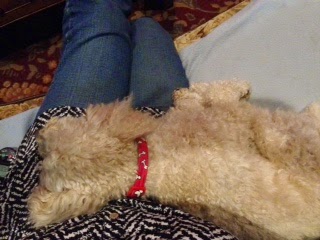 One last pic of my baby boy, exhausted after his haircut.  I know it doesn't look like he had a haircut ... he never does when I do it ... he just looks like a homeless pup!!  Still, it's better than going to the "real" beauty parlor and coming home traumatized!!  Now to find a Photoshop fix!

Posted by Nancy Kissack at 7:31 AM