The red rocks of Sedona were a sight to see yesterday.  Curious about what caused this, I checked it out and found that this area, like practically every other place I've been, was once under water.  A big sea, surrounded by mountains that eroded into the water 320 million years ago, resulting in sandstone.  When the Colorado Plateau rose up, the water began seeping through all the cracks and sandstone, leaving behind it's huge iron content.  Eventually, the dirt surrounding the sandstone eroded also, leaving these magnificent structures of red rock for me to photograph!  Amazing, huh??  I'd look for seashells, but can't seem to get close to these behemouths. 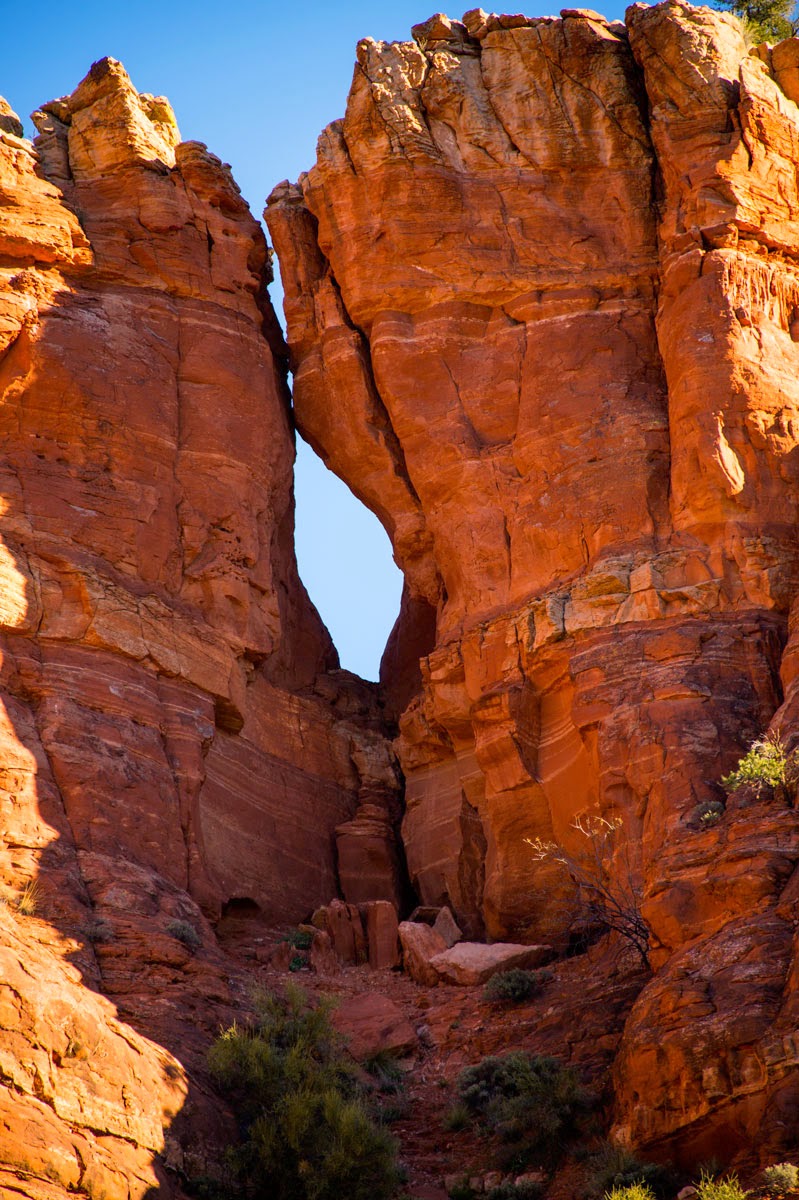 While walking around town looking at all the chatchkeys, I ran into an interesting fellow on a bicycle.  Not very friendly, he seemed to be hiding out behind the buildings.  Come to find out, he's a police officer.  A pretty shady looking guy, but he DID have a badge and POLICE on his bike, so I finally got up enough nerve to ask how I could get closer to the mountains for some pictures.  There are a few formations here to photograph ... Cathedral Rock, Coffee Pot and Bell.  I think that's Coffee Pot on the left, just not at the best angle to see the formation. 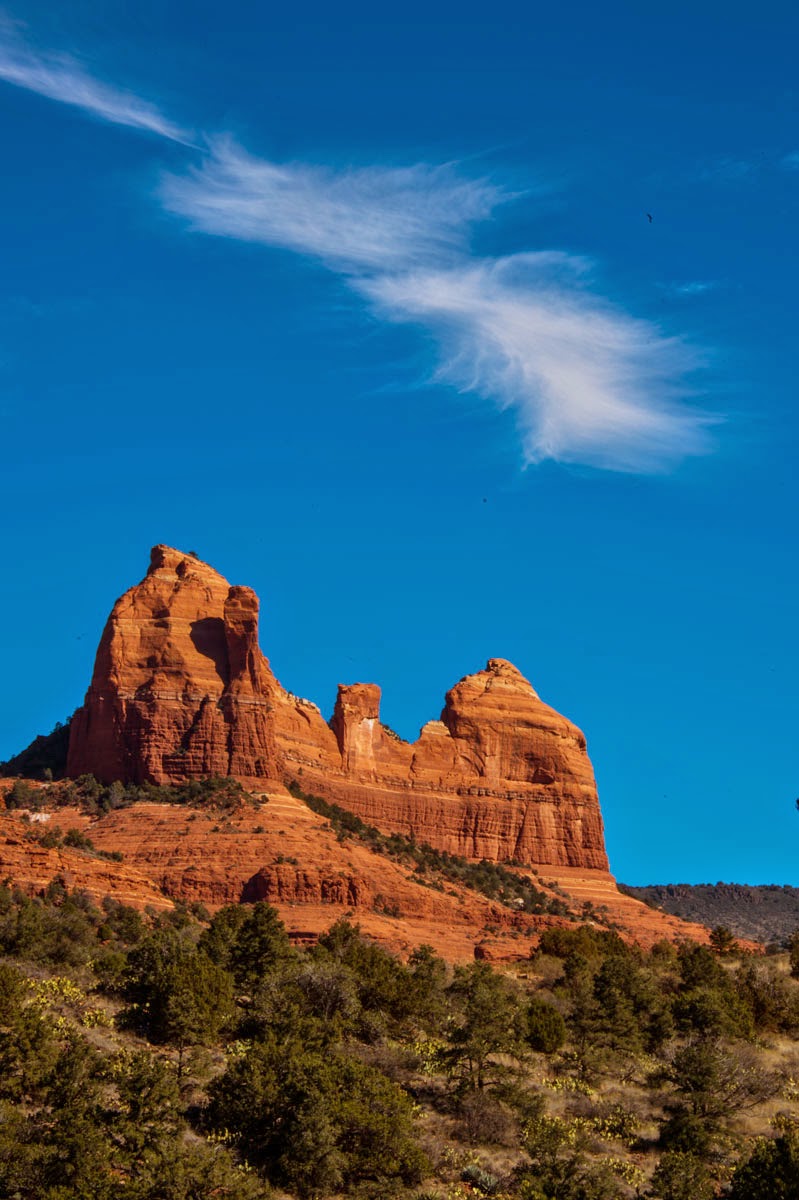 The Officer told me which road to take to get a little closer, but then I would have to hike quite a ways to get a good view.  Did you know you have to have a permit to hike here??  I'm not sure what that's all about, but there is NO place you can go without a hiking permit.  Must be a moneymaker!!  I'm guessing this is Cathedral, as there are no signs telling you what's what! 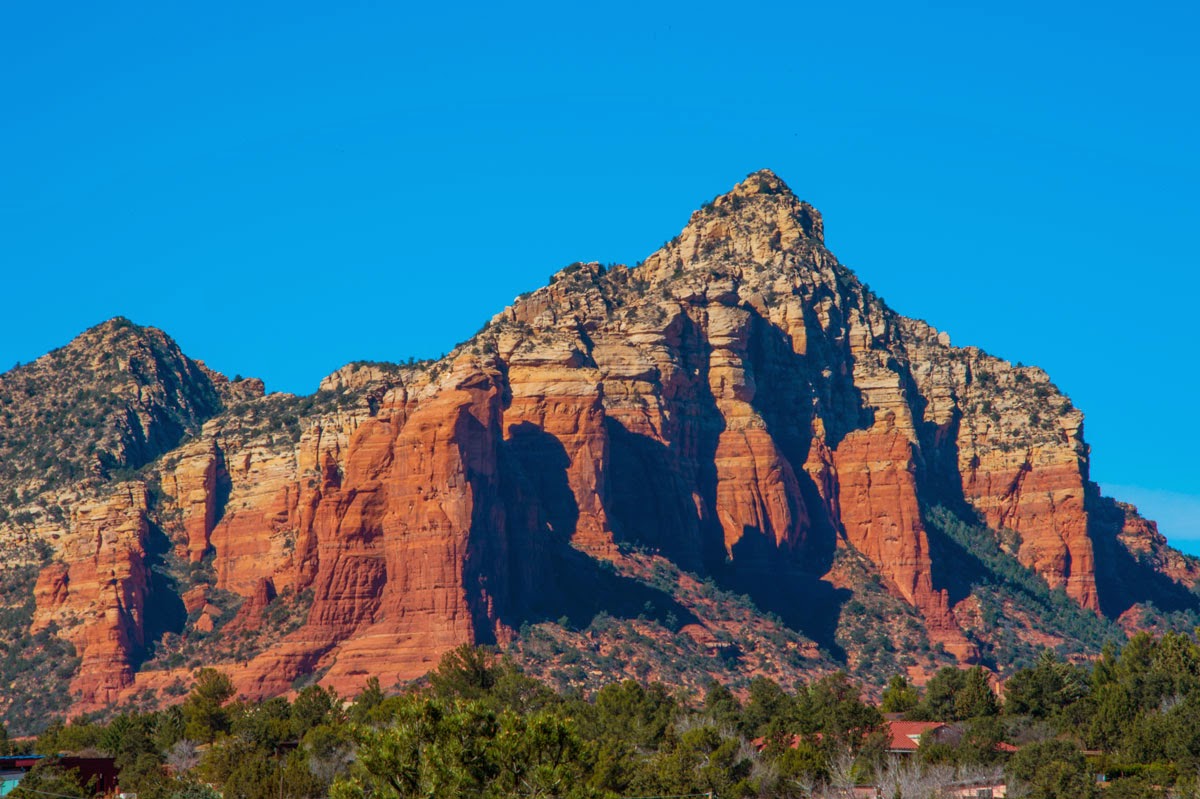 You know those stands where they sell all kinds of tours??  There was one right next to me  ... and the   young man said he could help me out.  I expected a major sales pitch, but he was really nice.  He showed me two maps ... one of town and one of all the hiking trails around Sedona.  He explained the pass deal .. $20 for a season pass OR $5 a day.  Like I said ... a moneymaker!! 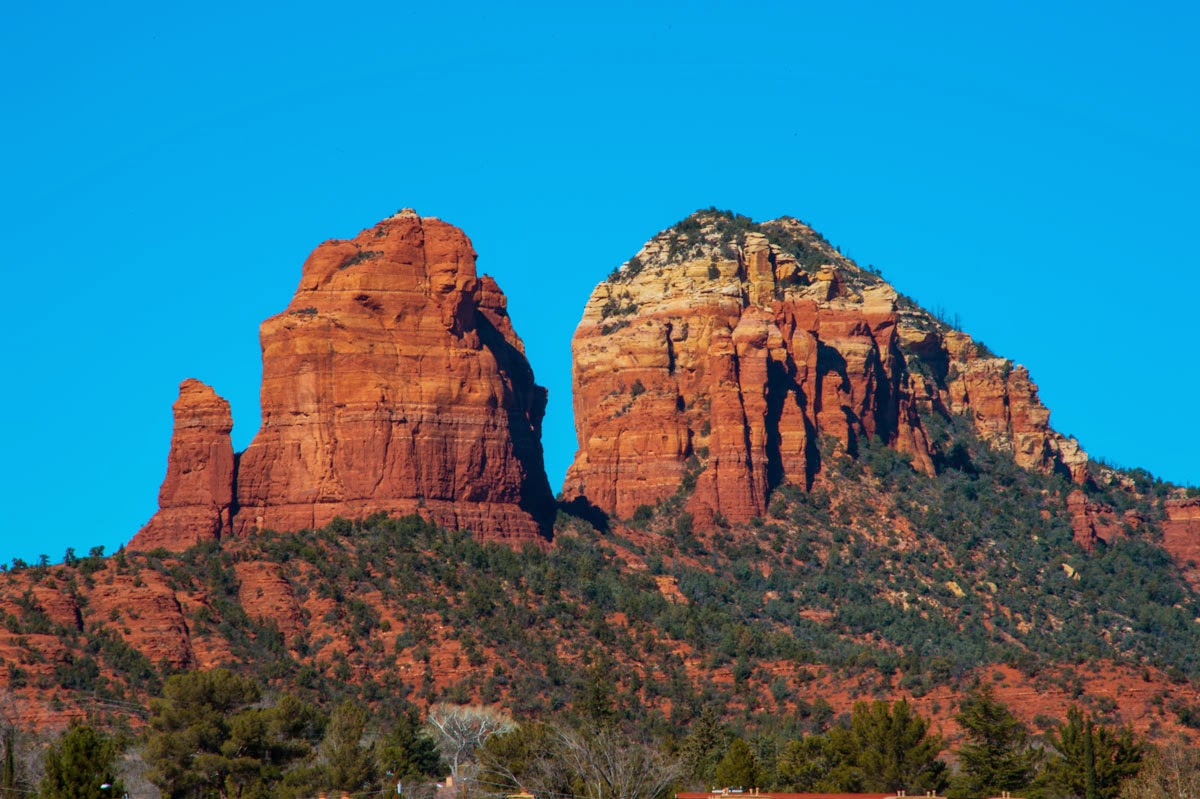 They both said I could drive to a much closer viewpoint for pictures, which sounded great.  Then they asked what kind of vehicle I had.  A Jeep of course ... okay, you're good to go.  I naively drove up the paved road to a small parking lot with a sign that read "ANY CAR PARKED HERE MUST HAVE A HIKING PASS".  I stopped and left the engine running while I raced to the edge, took a couple of pictures and raced back ... SAFE!!

I had been warned of the dirt road ... why else would you need a Jeep ... but I wasn't expecting THIS kind of dirt road ... mostly rock!!  I made it maybe half a mile before the local Pink Jeep Tour came screaming by me, letting loose flying rocks into my windshield.  I quickly understood that this was THEIR road, and I was an interloper.  I turned around without ripping anything off the bottom of the Jeep and slowly went back down the hill.  Now if I had my truck, it would be a different story, but I was a little concerned about the tiny tires on my vehicle. 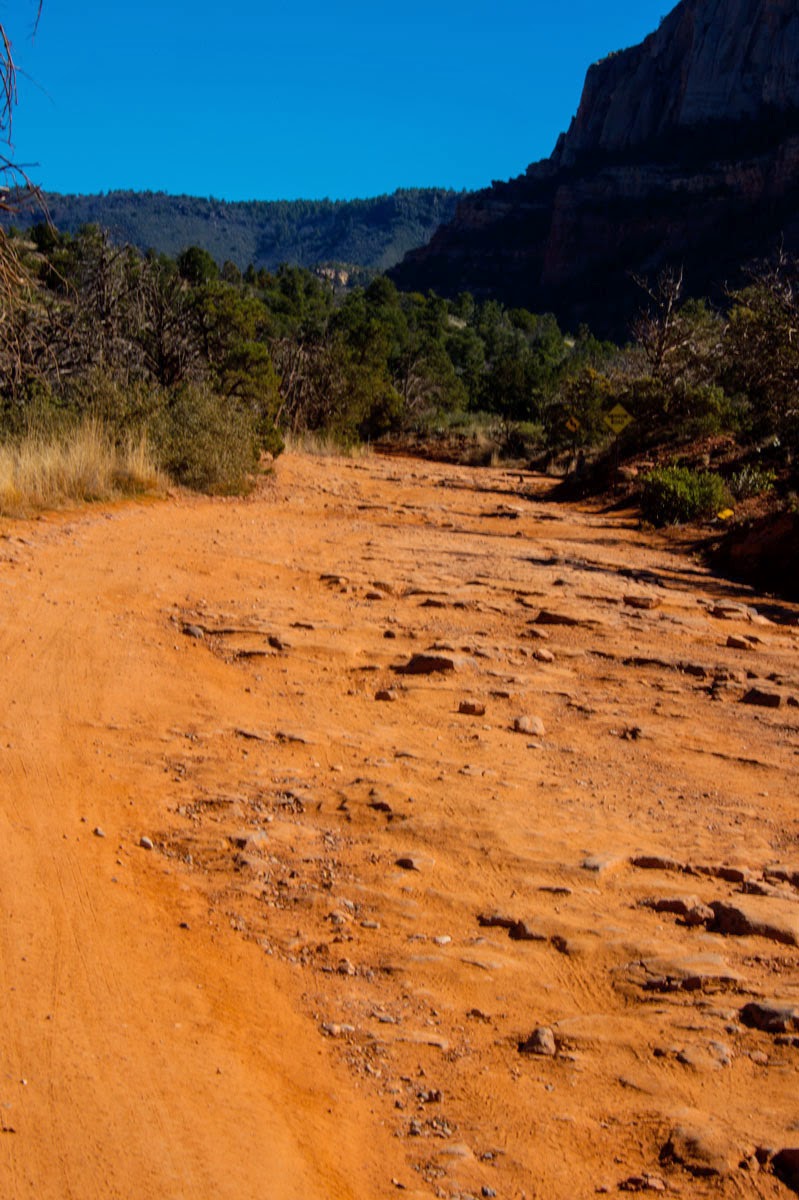 To soothe my wounded pride, I stopped in at the Cowboy Store and found a great Western shirt/jacket to add to my collection!!  To make me feel even better, there is a quilt store here, where Ann (one of the teachers) gave me a great idea for a quilt!!  There's no structure and no pattern.  You just cut up scraps and sew them together, paying more attention to color than anything else!!  I felt MUCH better by the time I left!! 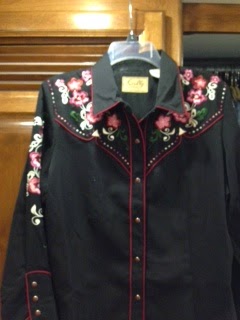 I didn't mention a couple of treasures I picked up in Jerome ... The Copper Town Cookbook, put together by pioneers of the area and sold by the local church.  This is the 18th printing, so I figured it must be pretty good.  Many of these recipes are from miners families ... mostly German, including my favorite ... pasties.  That's not what the prostitutes wore, it's pronounced past-teas ... little meat filled pies. 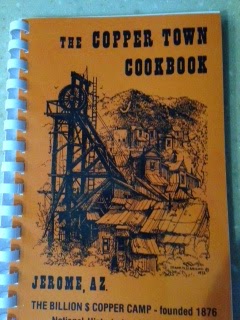 This is a treasure that I never expected to find in Jerome.  It's handmade by people from Africa ... the Zulu tribe to be exact ... from telephone wire.  I've been looking for one for some time ... and this one had my name on it!! 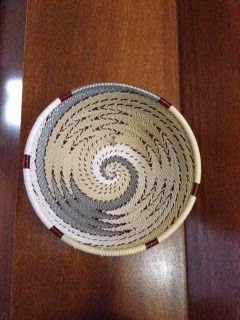 On the way back from Sedona, I checked out some property in Cornville.  I didn't even know this place existed!!  You can't see anything from the Cottonwood side of the river, but there is another huge valley off to the East where Cornville was established in 1896.  I think it's just a bedroom community for Sedona and Cottonwood, but it's a nice area.

I think today should be a rest day ... I've been going and going ever since I got here!!  There are still a lot of places to see however ... maybe I'll rest tomorrow!!